Before you read any further, I'd just like to say that I am only making this review to complete the collection of the Gothic saga. All Gothic installments after Gothic 2: NOTR have in fact been abysmal failures in the eyes of hardcore fans such as myself. Whilst Gothic 3 was semi-acceptable as a standalone game, it feels like as if each installment goes on the series gets worse and worse. You may feel that there are valid excuses with Gothic 3 as Jowood forced Piranha Bytes to publish the game early, and Gothic 3: Forsaken Gods was also published by and developed by Trine Games not Piranha Bytes, but the Gothic saga has forever been stained by its sequels. For more modern audiences, all gothic sequels after Gothic 2: NOTR will be their first impression with their updated graphics. I have not played Arcania: Gothic 4 as I have heard that it's actually worse than Forsaken Gods. It went as far as both fans and Piranha Bytes pretending that all installments after Gothic 2: NOTR as non-canon.

Returning from the unknown lands you wake up and you're immediately blamed for all the ills of Myrtana. 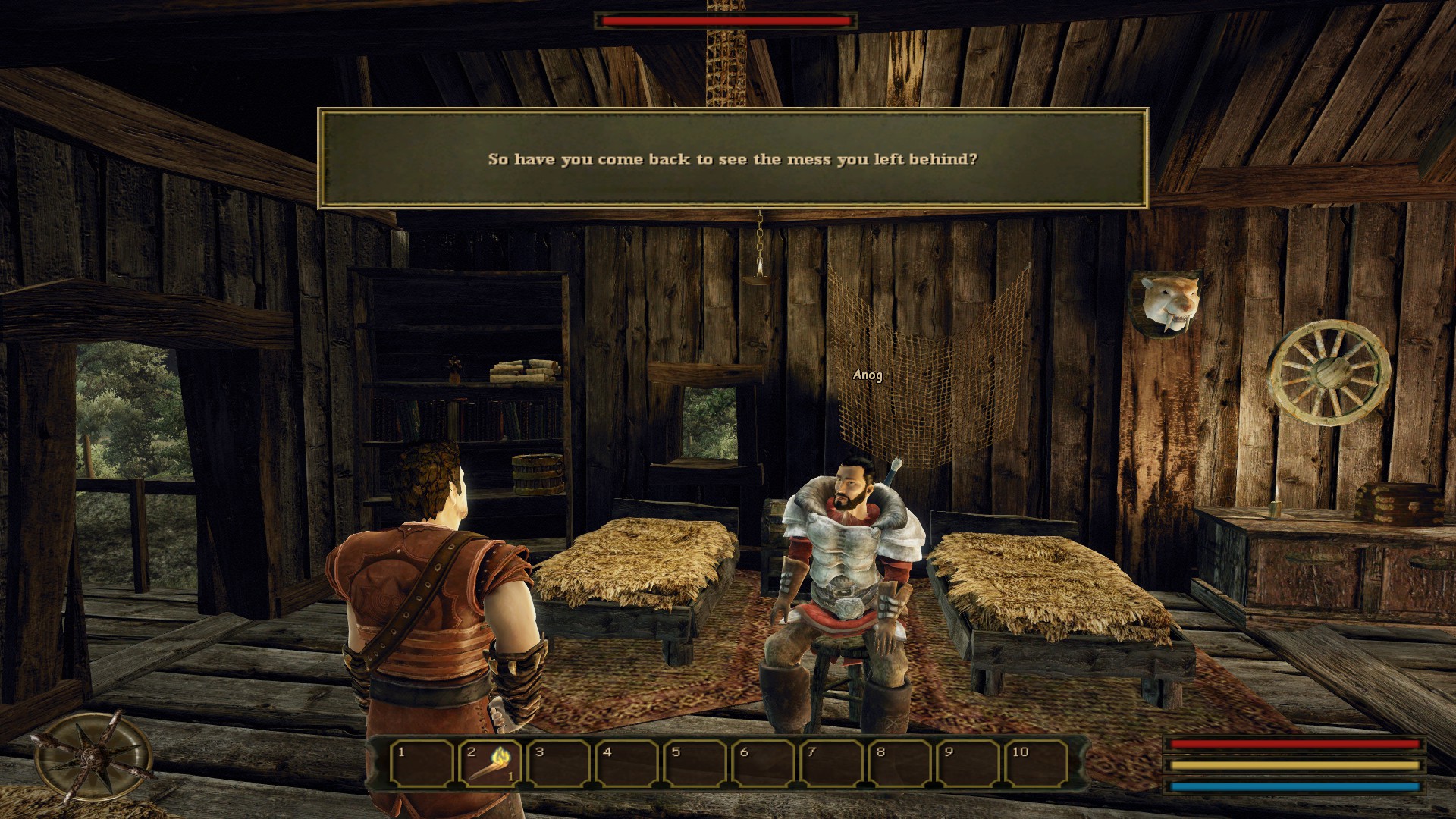 Anog accuses you of being untrustworthy after all you have done and that you're in the same boat as Gorn, Thorus and all the other warmongers in the land since they were your friends or you knew them. Yes, you're untrustworthy. You defeated the sleeper, the ore baron Raven, the dragons and since the Xardas ending is canon in this game, the Chosen of Innos and Beliar even leaving the unknown lands so that divine power would no longer exist in Myrtana. 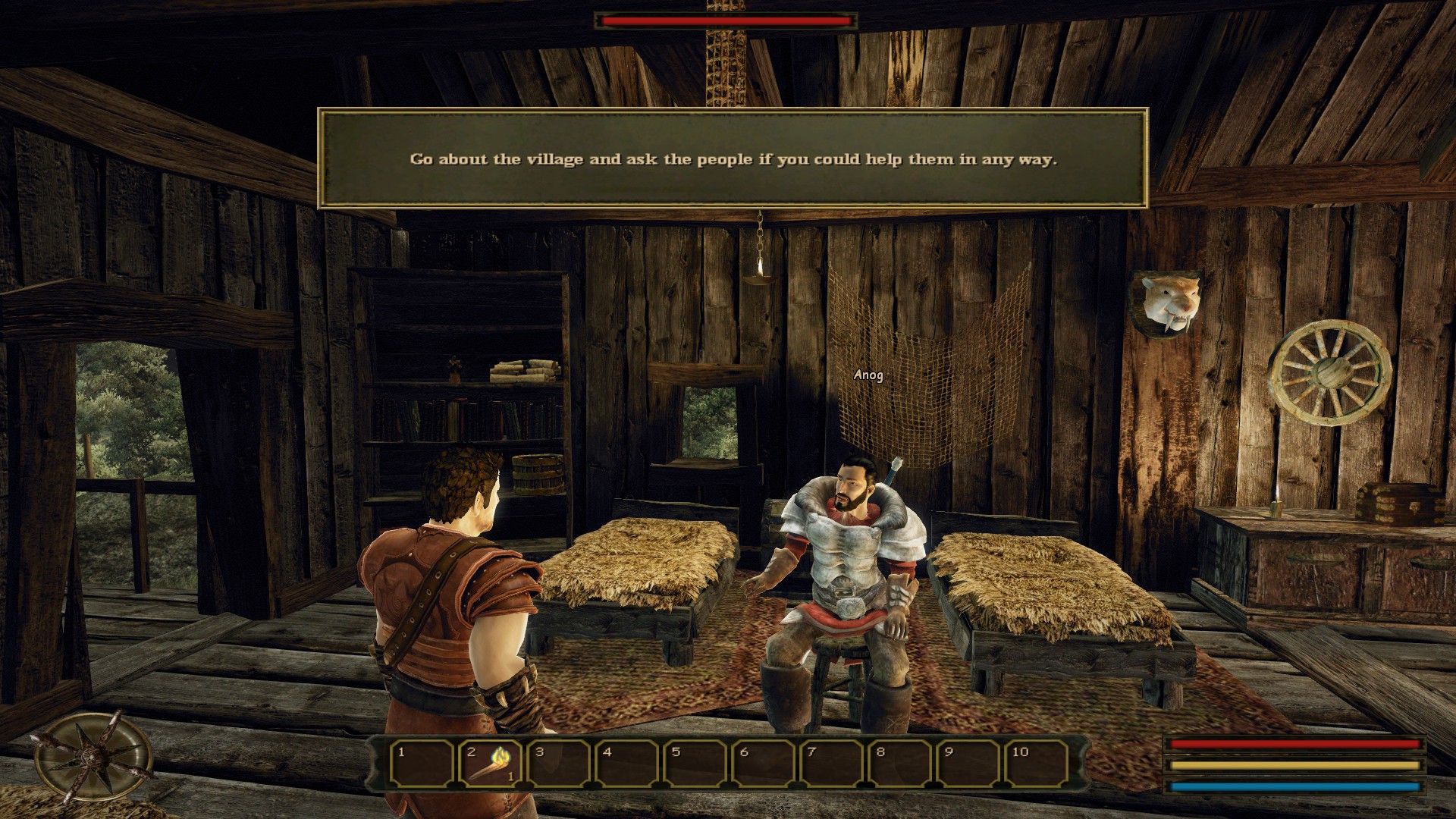 Yes, you have to gain the trust of the leader via fulfilling tasks for people inside cities. It is the reputation system from Gothic 3 only you have to receive letters of recommendation instead of it just tallying up reputation til you gain the leader's trust. Within the first minute of playing I noticed this 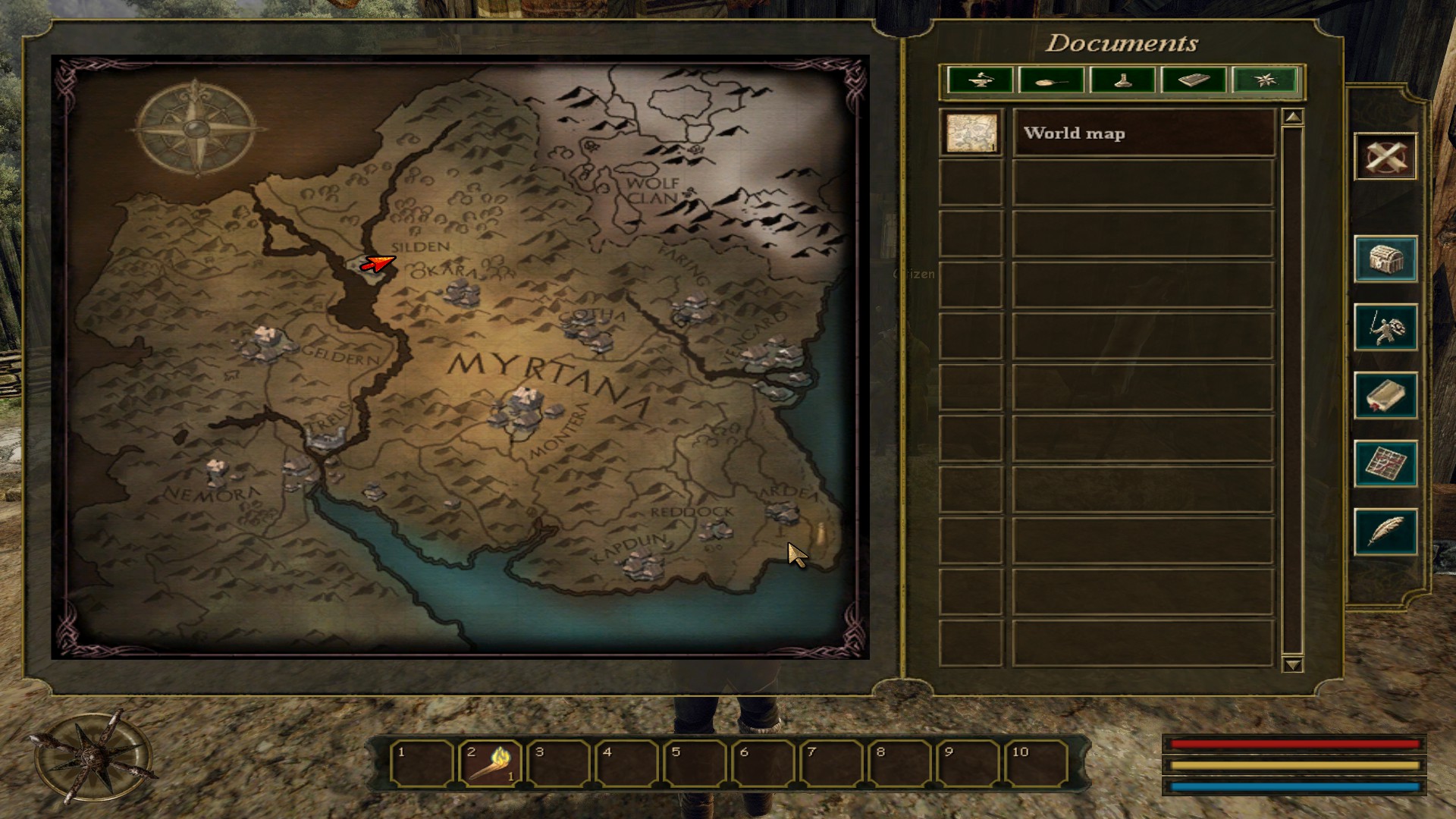 So cutting out a third of the map, adding a tint to the graphics, reusing tons of assets, including the skill screen constitutes a game? It's the same cruddy combat system from Gothic 3 only that NPCs seem to be able to parry more frequently. More on the combat in Gothic 3 here

The protagonist is now this tyrannical douche always scolding everyone when he used to be a likable rogue that anyone could see themselves as. The worse part is the story line would be exactly the same if he wasn't like this. 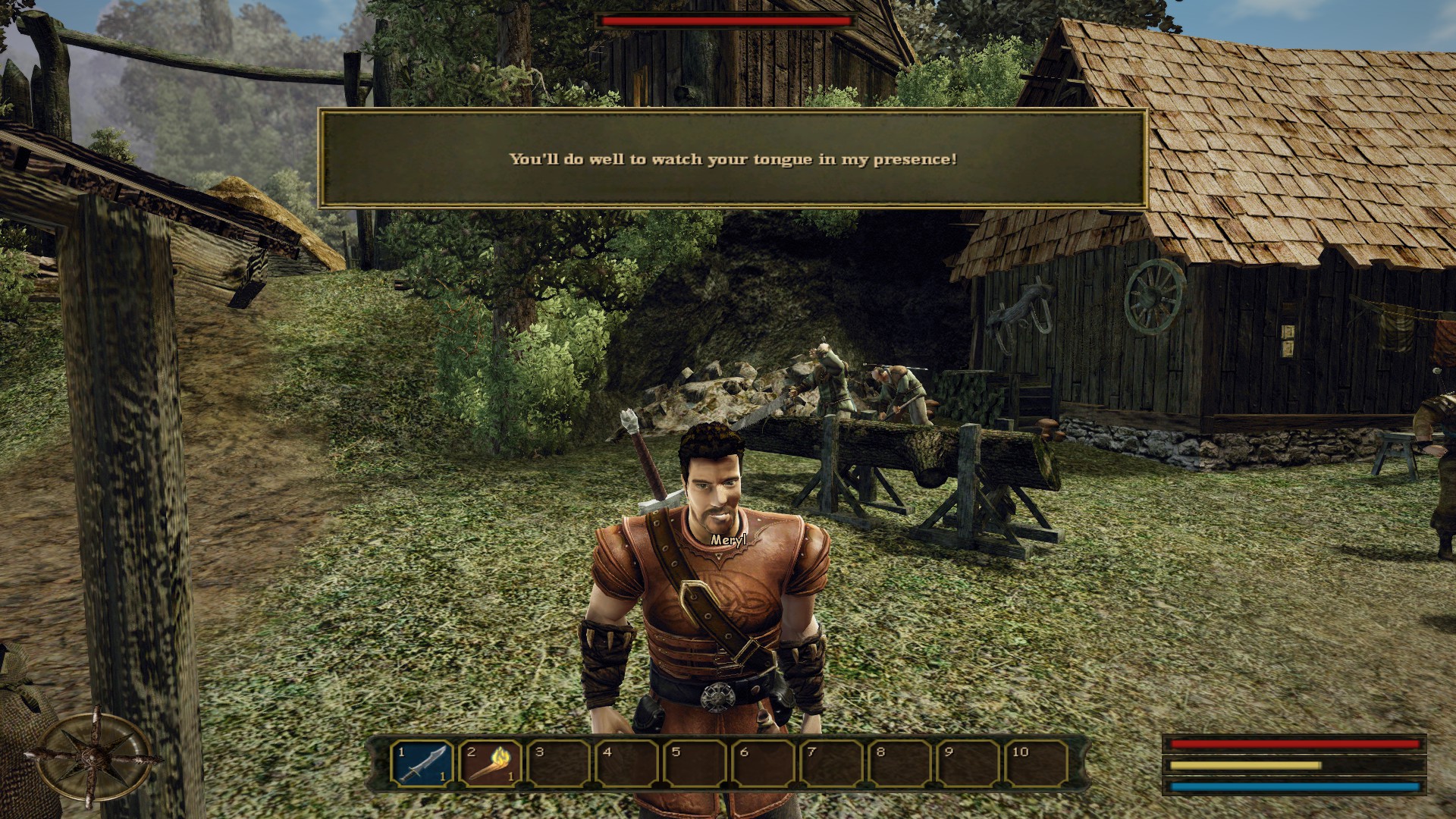 You're forced to do these weird sex quests where you can choose to use an amnesia spell on a literal wimpy cuck or beat up someone who slept with his wife for a letter of recommendation. Wasn't the Nameless Hero, suppose to see himself as a good guy? She is confirmed to be the town slut. 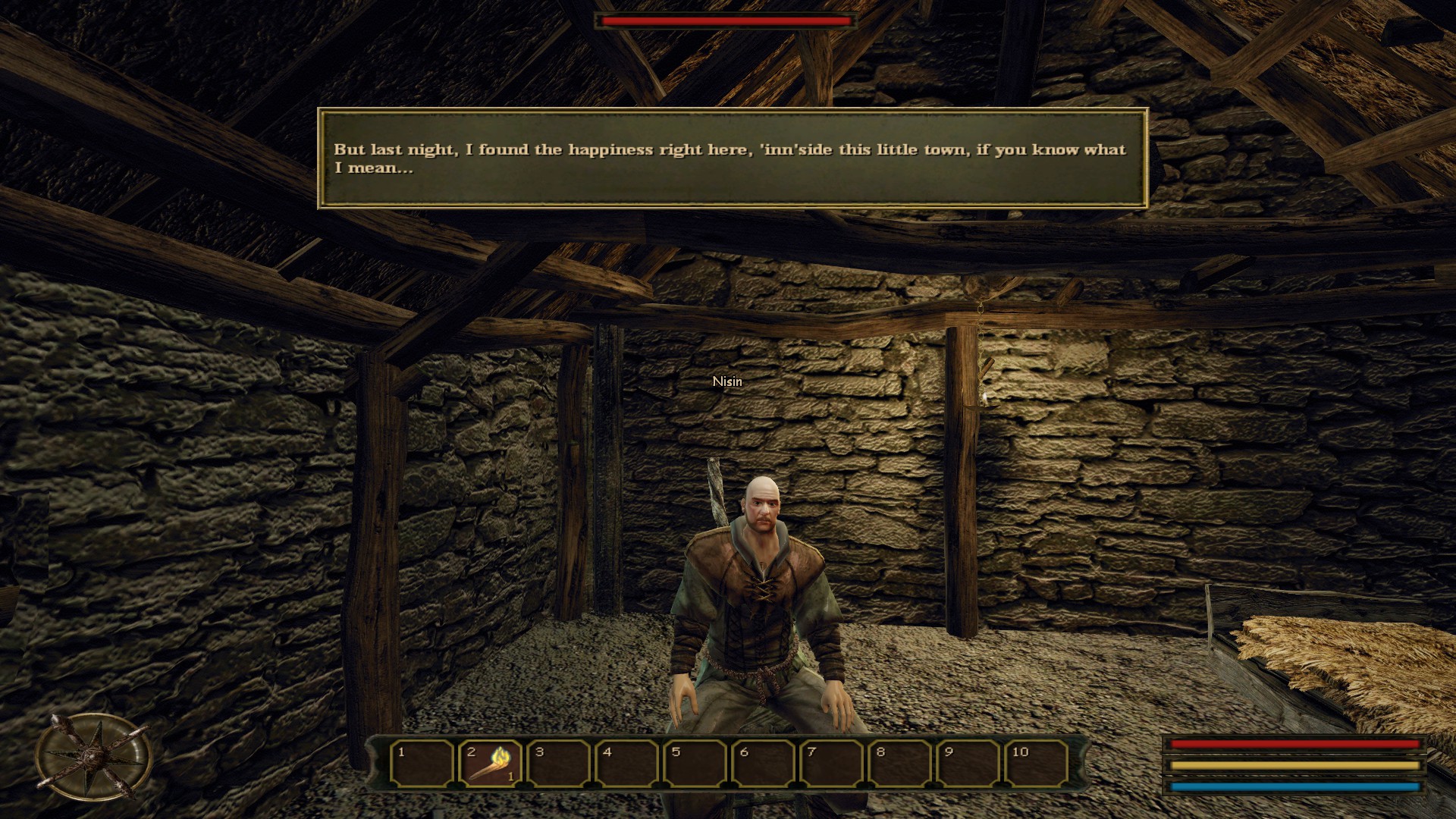 The guy you can beat up even admits he slept with her saying he'll do it again if you let him get away with it. 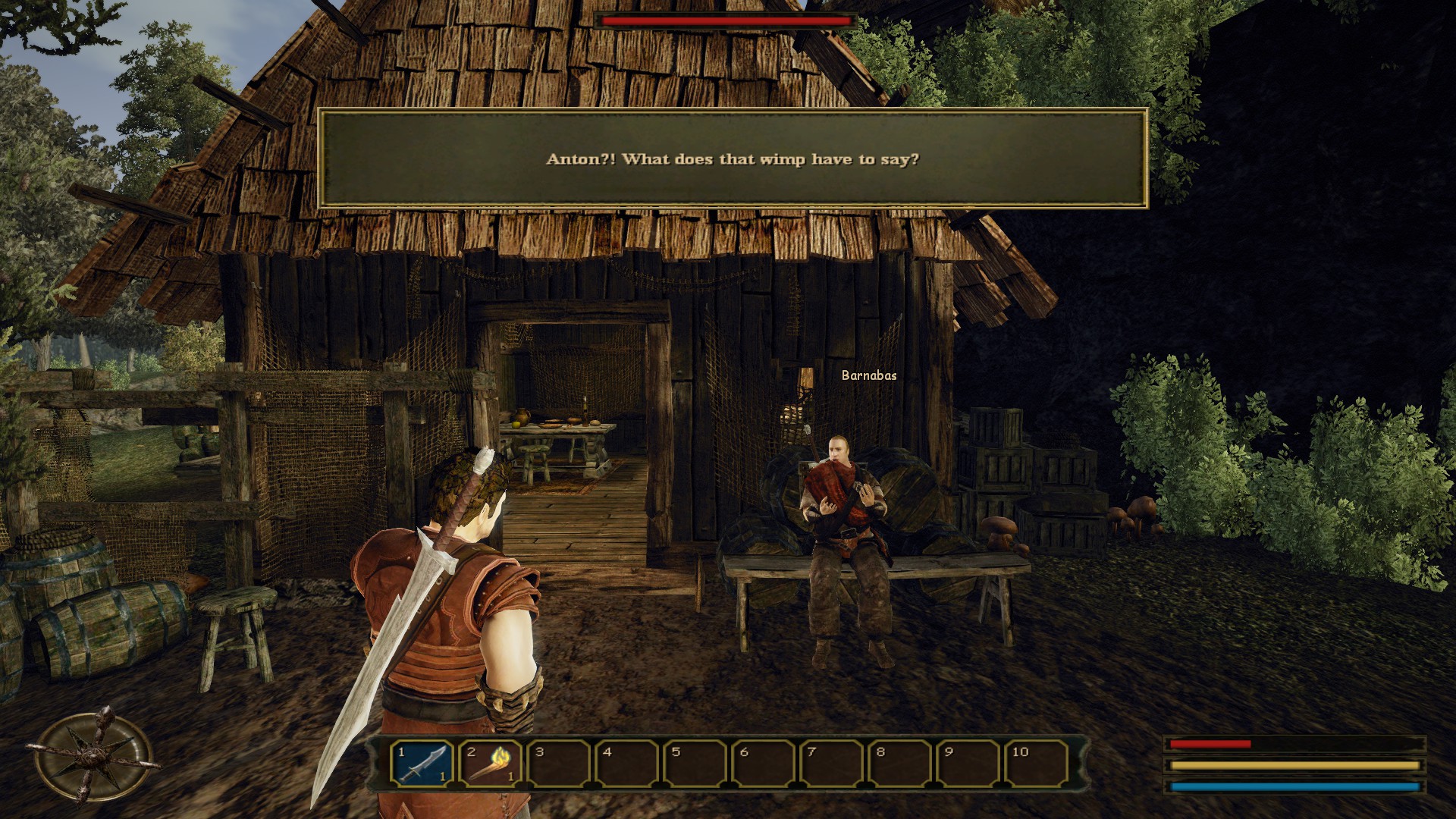 Afterwards you get a quest where the wife claims that her husband is a spy. Yes, that same town slut is the informant on her husband and the Anog, the leader of the town, believes her. Not only that, you're forced to kill Anton, the cuck, you can't side with him or defend him when talking to Anog. You must kill him to progress the story. Good guy Nameless Hero also decides to help a thief steal an amulet and gets lectured by him on morality 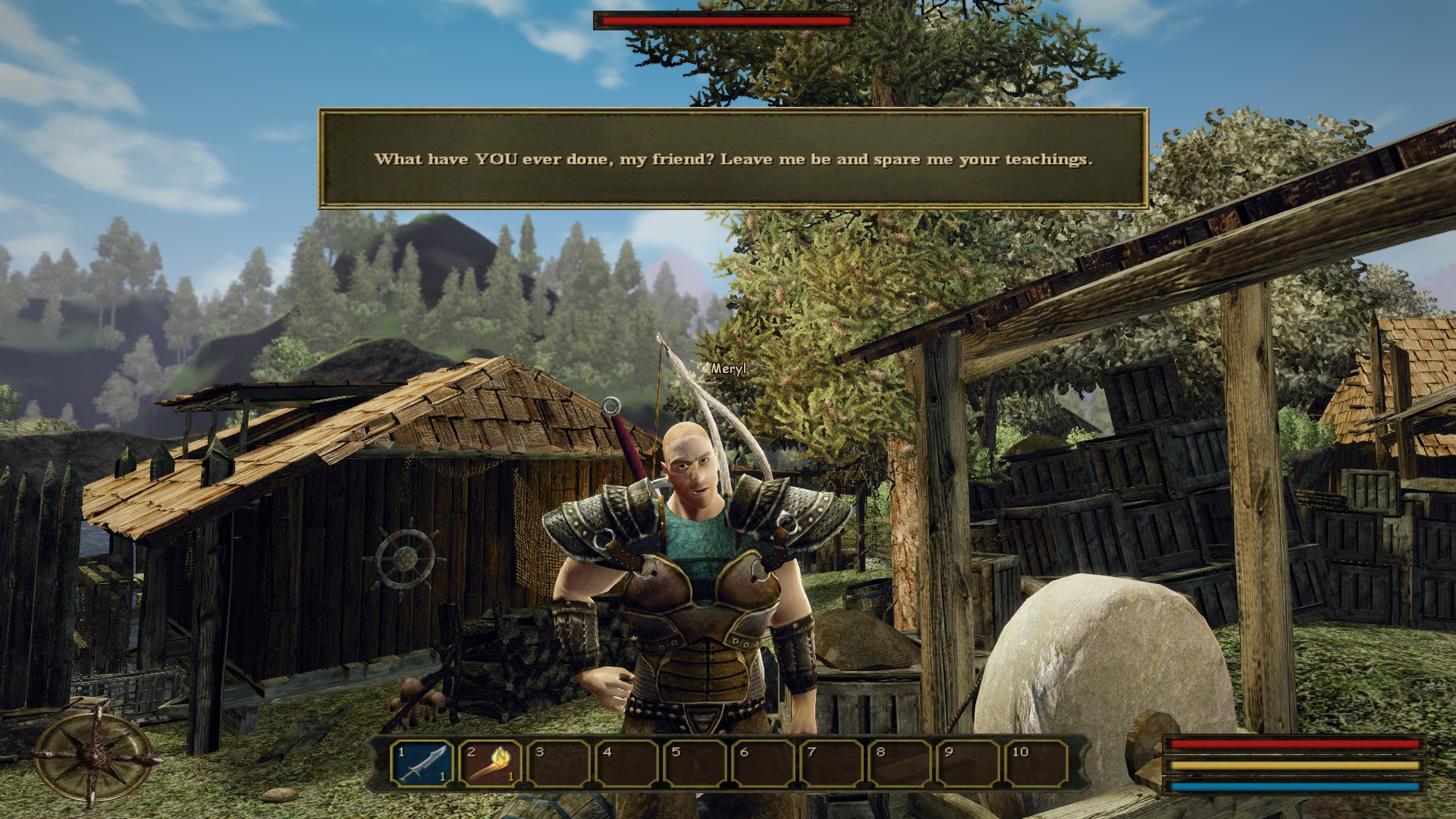 I got genuinely angry at everyone in this town. This is the aftermath. Funny thing is this is how the Nameless Hero would actually act out if he thought the was doing the right thing. He would mad that such a cesspit of human garbage would exist after all the effort he's gone through. He wouldn't help thieves, cheats and ungrateful city leaders while happily lecturing others on duty.

Just please, don't buy this game unless you get it as a complete package that includes Gothic 1, Gothic 2, and Gothic 2: NOTR. It really is a garbage game like if I wanted to taint the Gothic saga I would make this game. At least Gothic 3 had the excuse of trying to be more open world and trying out new mechanics, this is an abomination. I didn't get into any bugs in this review, but you'll really get pissed off if you ever pick up this game.

Congratulations @badcaptain! You have completed some achievement on Steemit and have been rewarded with new badge(s) :