What happens if you blend action heroes from The Matrix, Rambo, James Bond, Machete Kills, The Terminator, Robocop, Blade and Dirty Harry into one side scrolling game? You get Broforce. Their organisation's mission objectives are driven by stereotypical American bravado saving the world from black skid masked clad terrorists. 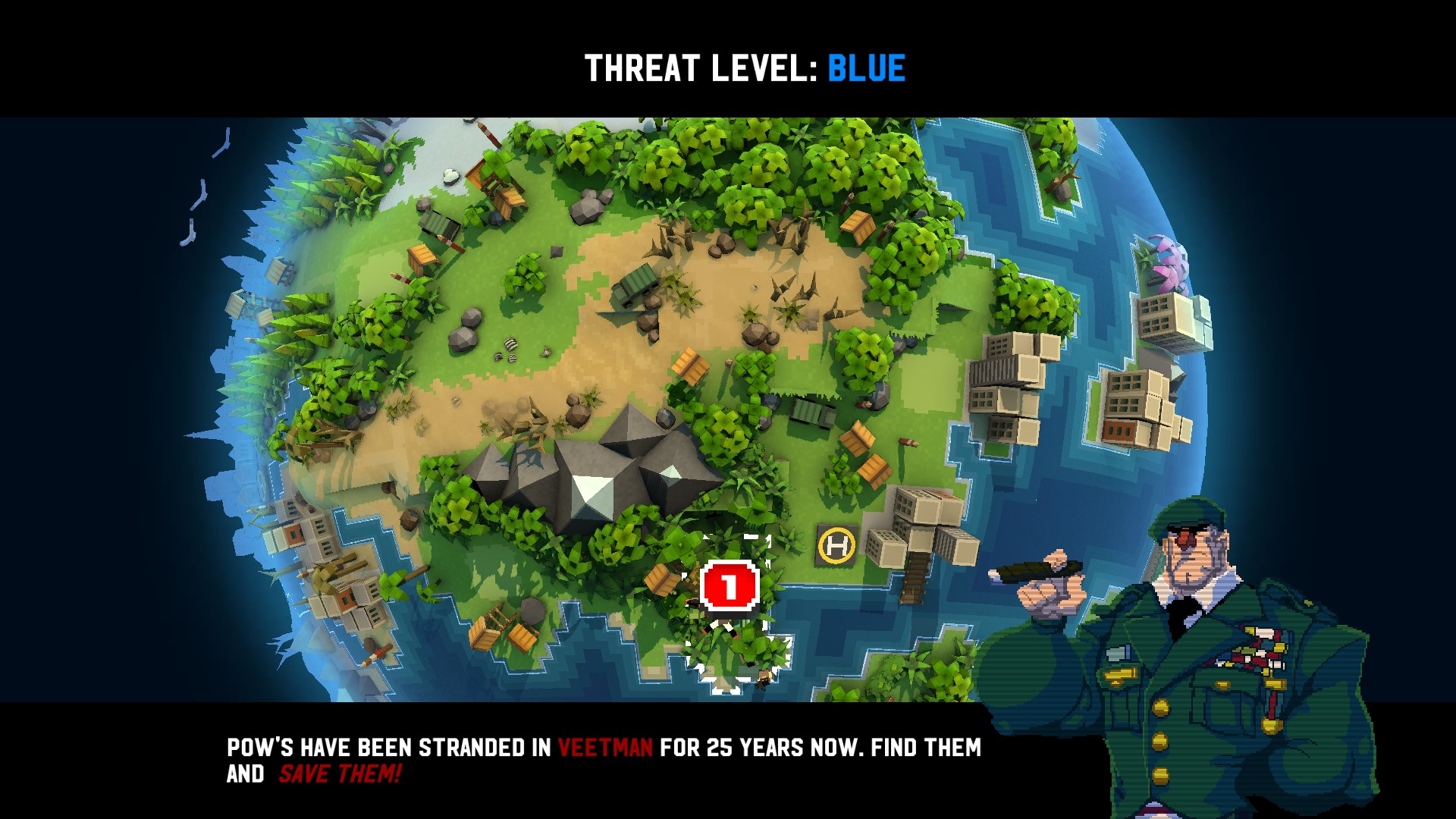 Each bro is unique in their regular attacks, special abilities, and melee attacks. One bro can throw grenades that trigger an airstrike whilst another pulls out a chainsaw intimidating all nearby enemies into fleeing and butchering them. There co-op multiplayer modes though finding lobbies with players is unlikely so a friend is recommended. The game is deceptively easy. Although the bro is capable of dealing huge amounts of damage just like in their respective films, their plot armor isn't represented as well. Bros are one hit wonders and will die to a single bullet not taking into account some special situations like the Terminator's special ability. It is difficult to track everything on the screen with all the explosions and debris dropping quickly changing the terrain making it extremely dangerous for the bro to just charge in thoughtlessly. While it's satisfying to succeed when doing so, it is frustrating to clean up all the enemies and then having a stone block drop on you.

Regular attacks for most bros are completely unable to shoot up or down, only horizontally. This makes it difficult to clear mines or stakes in the ground that are one level below you without the use of special abilities. Special abilities cost ammunition to use which is limited and of course some of them won't help you clear hazards. Enemies start a pattern when they continuously fire in a pattern once they spot you, not stopping until they are killed. This means you could be one step below a few enemies who keep firing above your head and if you jump you will get hit. If you destroy the blocks below them they keep firing and will be able to hit you.

Most of the time, you will take the game slow and steady which is safe but really kills the flow of the game when you're suppose to be this bad ass but can't take a single hit. The bro that you spawn with and the random bro that you get when you rescue someone helps spice up the variety, but there is no explanation for their abilities and some bros you may not like using at all.

Overall, the game has a fun premise which is easy to market but the execution of it fails to be satisfactory. This game would be best to be played for a laugh with friends not for single player. You want to keep running forward and causing destruction, but since one hit kills you will be put back at a checkpoint every time and then you feel horrible for the time you just wasted. A hit point system would really have benefited the game even if you have to call it easy mode.

You're welcome, more reviews on the way!