Empyrion - Galactic Survival is an early access game, released in August of 2015 roughly two years ago. It is a game where your goal is to survive, build a ship and explore the galaxy. You are allowed to do whatever you want in the terms of going and conquers a planet, creating a fleet of ships, as well as going to war with other factions and players. You can build a base to the specifications of however you would it to be built, as well as, whatever you would like to be built. While on the topic of build I would like to talk about the grand scale of it. You can create a number of ground vehicles, to space ships. Small vessels to massive capital ships, in which you have the freedom to roam the universe, staking a claim on what planets there it has to offer, as well as any resources in which you might find among those planets and other alien worlds in the galaxies you can travel and explore.

Ever heard of the game No Man's Sky, of course you have, who has not heard of that game? No Man's Sky was supposed to be a revolutionary game set to be in the exact same setting as Empyrion, however it was a complete bust. In the eyes of all the consumers who were wanting to purchase this game, they quickly realized it was a complete failure of a galactic survival game, as well as a game in general. I believe this game can and will be better than No Man's Sky, seeing how promising it is from the first few hours my friend @ggteixeira and I played. We both came to the conclusion this game is elegantly beautiful when it comes to graphics. The game play itself is smooth and very engaging, it is a very easy game to pick up and play due to the layout of HUD as well as the menu, and inventory. The gunshots and plasma rounds feel as if they were in real life, immersing you into the setting that you are actually being shot at and you cannot tell where the gunshots are coming from. The plasma shots, on the other hand, are very easy to spot, making me feel as if I am in Star Wars which for me is very neat.

Whenever you spawn in you drop down in a space pod/escape pod, allowing you to imagine what happened and why you are landing on this planet. You are able to control your descent onto the surface below, crash landing where you may please in a certain radius, seeing as you are plummeting towards the planet. Speaking of the planet you can choose between four as of right now to spawn on ranging from easy to hard, with one that is extremely hard. We chose to spawn on the medium planet, thinking we could be able to conquer these lands no problem. 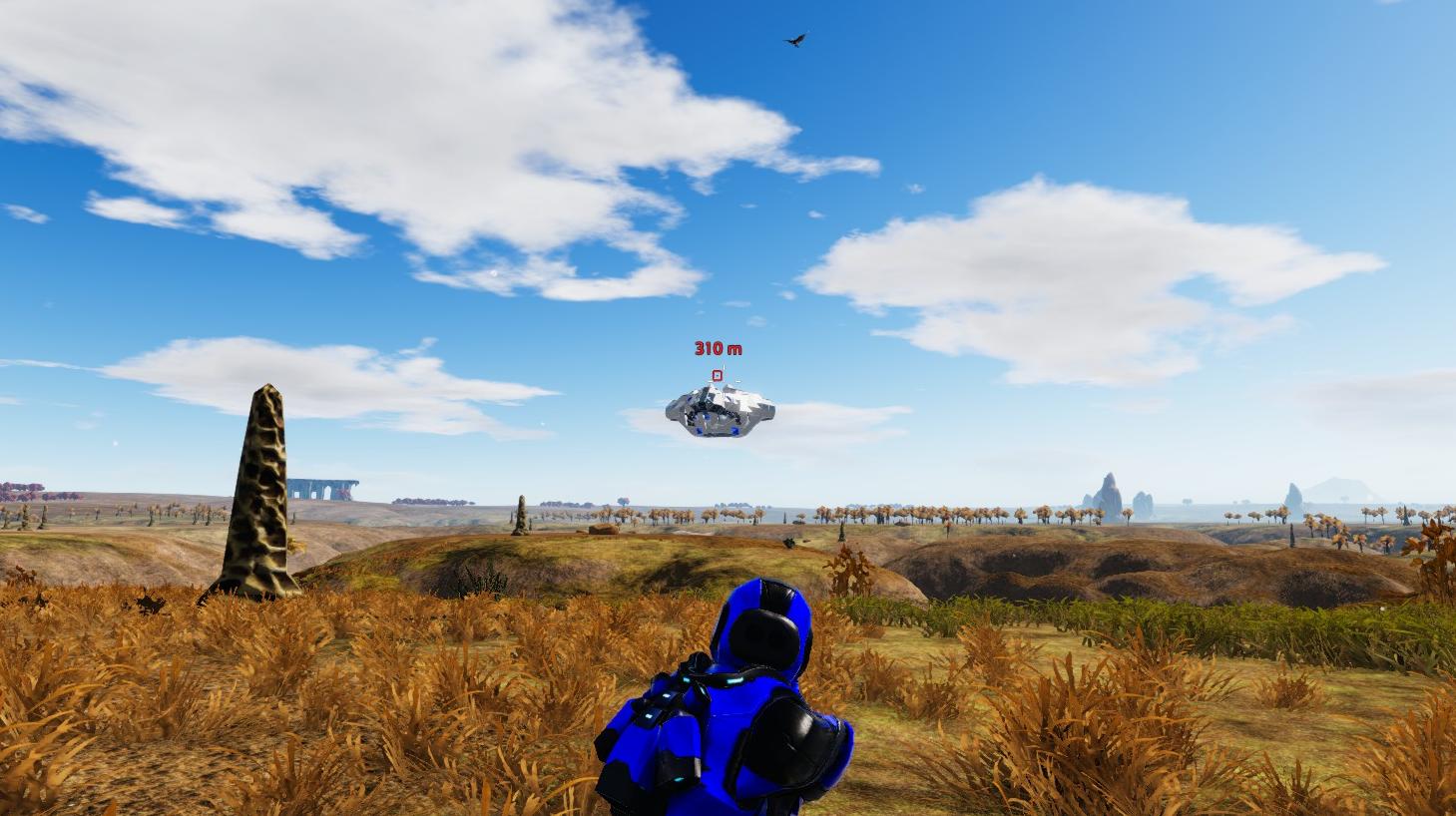 A space ship patrolling the land nearby.
After we had crash landed we conveniently landed right next to each other, our plan was to go look this base nearby, however, when we started approaching the base it started shooting our direction. We ran back in a frantic manner, just to look off to our left and see a huge ship coming right for us. We wondered what was going to happen whenever it got to us if troops would jump out, would it shoot? We were curious, (un)fortunately we did not have to wait too long as it started unloading on us. Yet again we ran off into a drop off to avoid the oncoming barrage of bullets.

We managed to escape and start our own little base, we gathered ourselves. split up to get resources to make a small base in order to survive and eventually make a space ship to get to outer space. The hope was to be able to explore the other planets and eventually build a space station, along with some capital ships, along with a few troop providing us with a means of transport for our army we would soon recruit. A space station in the outer ring of the solar system.
You can build bases like these anywhere in outer space as well​​l as bases on the ground, upon any planet. You can also change the number of​f planets are in each game, whether it is singleplayer, co-op​, or multiplayer. You can add plenty of new planets for you or others to explore. Along with conquering them and taking them over for yourself and faction.

This game is good, so far from what I have researched and what I have played of it. This game has been in early access for two years now and I am unsure of what the developers are planning to do with the game, whether they are taking it slow or not excited anymore. Whatever the case may be, as long as they get all of this done within a reasonable time then I do believe this game has a good future ahead of it. It would be worth the buy if you have a lot of extra money laying around.

Thank You For Reading

As always I would like to thank everyone for reading this post on Empyrion and if I swayed you one way or another on this game, I am glad to have helped. If you wish to say anything I would love to hear from you in the comments. Until next time my fellow Steemians!

Submit
$42.03
16 votes
5
Authors get paid when people like you upvote their post.If you enjoyed what you read here, create your account today and start earning FREE STEEM!
Sort Order:
[-]
ethandsmith (62)  ·  2 years ago

I'll definitely be checking this game out. Great post. Thanks for sharing.

I've never heard of this game before, looks to be right up my alley. Thanks for the post, I'm going to check it out tonight! Upvote for you sir!

I hope you enjoy it if you choose to get it! Thank you for the support, ​my friend! Stay tuned for more reviews like this!

Thank you for the Upvote and Resteem, your support means a lot! Stay tuned for more :)