Funny denial: 50 Cent Claims he is not a Bitcoin Millionaire At Bankruptcy Court

This is a funny but serious case of denial of wealth. Few weeks ago, it was all good and most of us : cryptocurrency lovers were celebrating a big success story : Rapper 50 cent joining the success story of being among bitcoin millionaires read here for details Most recently, in a sworn statement under oath, rapper 50 cent denies the news of owning roughly 700 bitcoins. According to Cointelegraph,:

According to The Blast, TMZ falsely reported in January that he made 700 bitcoins by accepting them as payment for his album “Animal Ambition” in 2014. The Bitcoin fortune rumor was subsequently confirmed by 50 Cent on Instagram and a tweet which are no longer available. 50 Cent now acknowledges the reporting to be false.
The famous rapper originally filed for chapter 11 bankruptcy back in 2015 at the Bankruptcy Court for the District of Connecticut. While the case was settled in 2016, a court filing last week by Jackson’s lawyers sought to clarify that 50 Cent, “never owned, and does not own, a bitcoin account or any bitcoins.”

On Friday, under penalty of perjury, the rapper filed documents relating to his 2015 Chapter 11 bankruptcy case to clarify that he doesn't own, "and have not owned, either a bitcoin account or any bitcoins.

In light of the development, I do understand if he decides to deny his wealth and save himself from governments control and greedy gold diggers going after him due to his success. Moreover, this shows also why we should shut up our mouth if we make a lot of money because exposing your wealth will lead to haters and criminals going after you. I discussed the issue of exposing our wealth on steemit here see: Warning: The Dangers of Exposing Your wealth on steemit , online and other Crypto platforms

Lol, this is soooooo funny isn´t it...but serious too Lol . What do you think? Send in your comments and or suggestions, resteem and upvote in order for others to join.

An Advert for a top new crypto www.elyte.io

Competition: Our competition bounty is open- feel free to share this form and Join Elyte 1st Social Media Video Competition via this link : https://docs.google.com/forms/d/e/1FAIpQLSdOtRSqVYV48sIghmNUGG_pUNtoc-AneaDUzN8YBZhDPGPIzw/viewform
White List / Crowdsale: crowdsale is still open for those who want large quantities of Ethereum Lyte at good price. Take up the opportunity of cheap Eth now to change some fiat and buy cheap elyte tokens now before it is too late (see link https://main.elyte.biz/?page_id=433 )

Damn hahahahahahah however this time hiding his wealth, hope he joins steemit ...of course with fake Id´s Hahha

And if he joins steemit,expect another funny denial.😂

hahaha I agree, maybe he is one of the whales because most are here with fake ID or anonymous

I would like to ask privately whether it is permissible and where I dm you whether you are a community on this discord is very important. thank you always follow you
@charles1

Get rich or die mining!

These guys have really figured this out. You can make money while you sleep, Just signup Download the free miner. There is never a fee. (not to sound like a shill) This is like a money drop! I will post again with details of my profits. 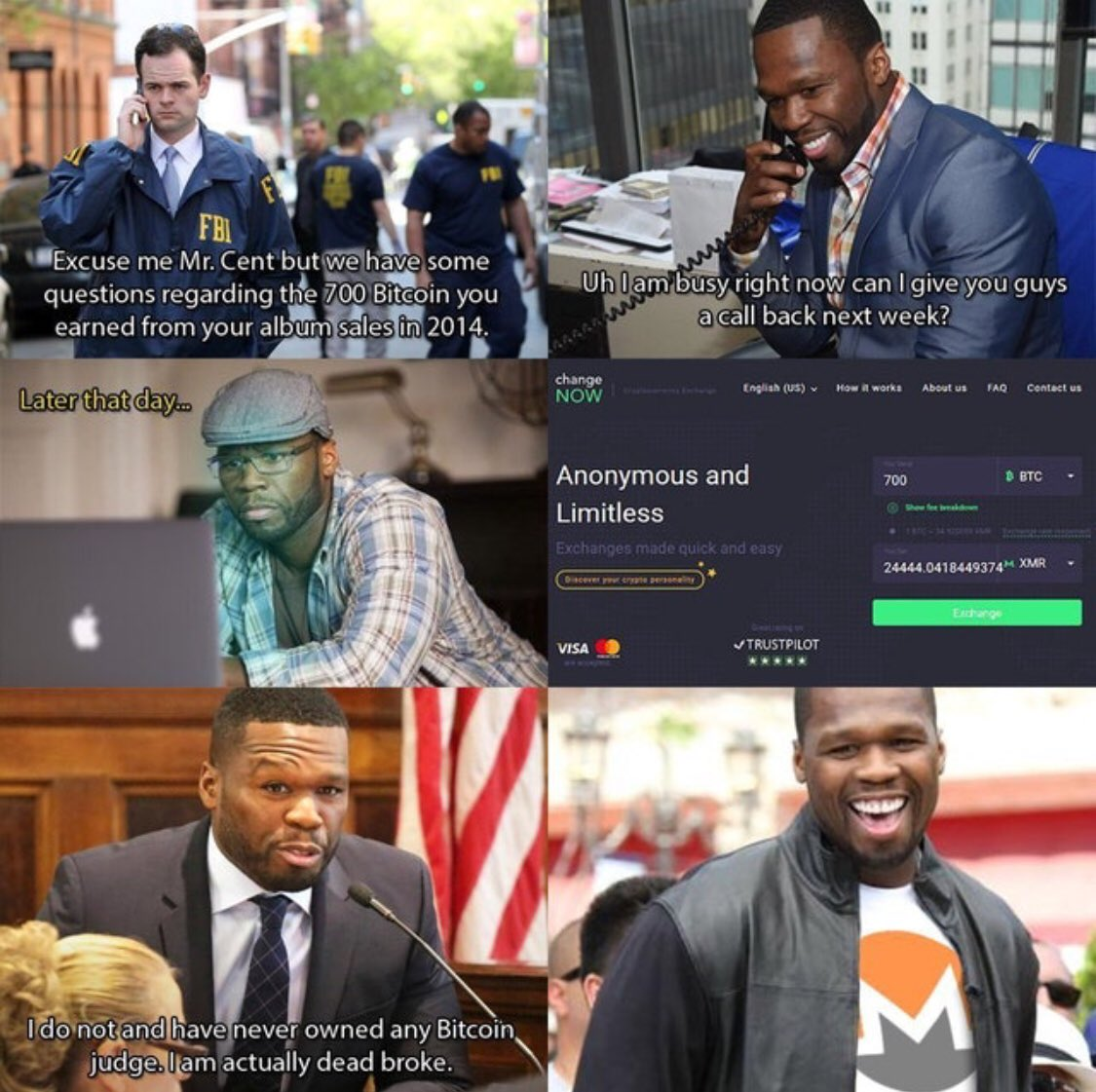 Hahahahaha this is a serious case of denial of wealth for dear life!!! Go Go Go 50 cent...deny it before uncle Tom attacks ...Lol. Upped.

I'd deny it too! Taxation is theft!

Of course he has no BTC - he bought Monero with it :>

Yeah, it really is funny. But it makes sense as well after all with that much money involved it would be strange if the government and other people wouldn't want to have a piece of the pie. Though it is his fault in the first place, if he didn't boast about it no one would know that he even have Bitcoins.Either way, it is a good lesson for all of us. So I suggest we take heed and not do something so stupid.

50 cents got his magic stick and a PIMP...he is pimping his haters now claiming bankruptcy 👆😋. Nice one. Upped

Lol..... chill with him, maybe he was scanned tho

He went through bankruptcy. That means some creditors were screwed. You would deny having any money also, don’t want them coming back. Or worst, sending “someone” to collect.
Also, he probably thinks “screw the IRS, let them find it first”

He should unless he will lose all to haters

hahaah yeah he is pathethic...

Maybe he should change his name from 50 Cent to 700 Bits, funny post @charles1 thanks for sharing :)

IRS is calling for 3000 Coinbase users; the problem is that once something become popular it would be hard to cover it up or maneuver around. 50 cent and all other artist alike would have to update how they play the cat.

It is wise thing for him to deny that he doesn't own any bitcoin if not criminals will come after him. Thanks for sharing.

really friend. if we have a lot of money the criminals will target us always, let alone the world is now a lot of rebels, I like posting friends.

this is a genuine instance of disavowal of riches for dear life. amusing however there is genuine story behind this article

haha funny but there is real story behind this article. keep it up thanks for sharing the content

This was a weird little piece of publicity surrounding crypto that I never quite understood. I think people want to see others, (or more prominent figures) with their hands in bitcoin...it’s validating I suppose.

Maybe it’s more of crypto entertainment— even we all need a little drama I suppose.

I guess I just think it’s strange how much the 50 cent- bitcoin fiasco was covered...then suddenly disproved. It was always speculation I suppose..

But what I’m the cryptoverse isn’t speculatory? Reading candle charts??- I think not.

Good point, however I see it as a positive press for cryptos

Fiddy Bitcoins is a better name

No showing off, lesson learned xD

Lol this 50 cent bitcoin has been trending for some time now, he is very lucky but it's his hardwork that gave him that, in life there is no luck without hard work.

Conclusion
He is lucky.

I would have done the same thing‼️
F.... the system🤣
Welcome cryptocurrency/blockchain 🤞🏾📈🚀♻️

Same here!! and after I will be anonymous and also join steemit -all with hidden Id´s hahahaha

This post has received gratitude of 11.61% from @appreciator courtesy of @charles1!

You got a 9.82% upvote from @buildawhale courtesy of @charles1!
If you believe this post is spam or abuse, please report it to our Discord #abuse channel.

Owning bit coins or not is his luck🤷‍♂️🤷‍♂️🤷‍♂️

upvote and follow @rikineng
i am a newcomer in steemit

it has to be a double feeling , having a manager saying that it's good for his image , while he is "actually" broke ass :)

He is not really broke...just avoiding paying his money to haters

Haha denial of wealth for the cause of life. 50 cents lol.

It's no laughing matter--death & taxes...

True to that you either make it in this world or it either breaks you.

He probably just found a way to anonymously convert it to monero. Problem solved for him indefinitely

Congratulations @charles1, this post is the sixth most rewarded post (based on pending payouts) in the last 12 hours written by a Superuser account holder (accounts that hold between 1 and 10 Mega Vests). The total number of posts by Superuser account holders during this period was 1706 and the total pending payments to posts in this category was $13943.85. To see the full list of highest paid posts across all accounts categories, click here.

The new old trick or a.k.a the divorce trick :D

Thanks, this is informative

Oh!, i did read through actually, wasn't just commenting randomly

Apart from the news i got on 50 cents, you also explained the dangers of exposing one's wealth on social platforms, you did justice to that.

This is a very interesting story. Thanks

Why? what is interesting about it?

Wow good job men.. Learn me to get much money

your post is a great dear, deserve you to get a good ranking too, I think in a long time to make a single post, but this is my post, I follow you, may you be a lesson for me. I dont actually believe 50 cent from this article....he said he sold his album for btc....now saying he doesn't have a single btc neither a btc account