The Georgia Guidestones and the Planned Depopulation of the World

The Georgia Guidestones is a granite monument that was erected in 1980 by an anonymous man using the pseudonym of Robert C. Christian. The monument is located in Elbert County, about 90 miles east of Atlanta, Georgia.

Due to the secretive nature in which the monument was commissioned and the ominous inscriptions on the monument itself, the Georgia Guidestones have been the subject of many conspiracy theories over the years. One can only imagine the sick and debased mind that could come up with the following "ten guidelines for humanity": 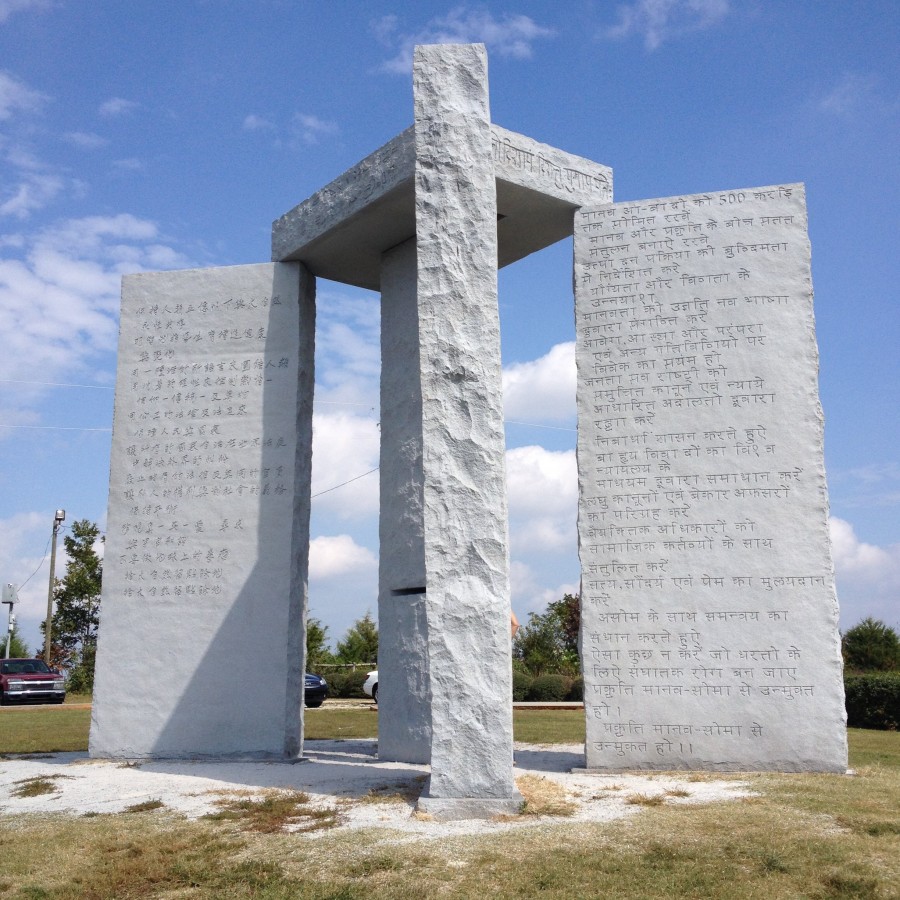 Considering that the current world population is somewhere in the neighbourhood of 7.5 billion people, it is chilling to imagine a world inhabited by only 500 million people. That is a reduction of 7 billion people!

When one considers all 10 guidelines together, it becomes clear that they present an entirely new world view of global unity. A more appropriate term that comes to mind is New World Order, since the very spirit of these guidelines suggest that these rules are not optional. I doubt that 7 billion people are instantly going to start feeling suicidal and just give up.

Of course this global new world order has already been in the works for many decades. One only has to read a little bit about topics such as Bilderberg, Agenda 2030, the Paris Climate Agreement, the forfeiture of rural land under the guise of reforestation, etc., to see the common thread of a global government. While the idea of globalism is being sold as a positive thing, one should also carefully consider the adverse results of such a radical change before jumping headlong into support of it. Travel will likely be severely limited, cash will be outlawed as the global government will undoubtedly pinch every penny out of their tax slaves, owning any sort of property will be a thing of the past as socialism is being rebranded and resold for the thousandth time in history. No matter how they spin this, it is clear that personal freedom is not part of the package. Recently I stumbled on a web site called Deagle.com, which appears to be a "guide to military equipment and civil aviation". If you click on the link 'countries' on the bottom right corner of the page, it will lead you to this page. Here you will see a forecast of Population, Gross Domestic Product (GDP), Military Expenditures (Mil. Exp.) and Power Purchase Parity (PPP) per country for the year 2025. Of note is the population forecast column, which shows the current population per country as well as the forecast population for 2025. I've included a few countries below:

Note how the population of the predominantly western nations drastically decrease while a few of the developing and third world countries increase. In the case of the USA, the population is forecast to drop 83% from over 320 million to a mere 54 million. How exactly does that happen in the span of only 7 years?

Follow the link above and have a look for yourself. What do you think?

Image sources from Google Images and content from Wikipedia.

Congratulations! This post has been upvoted from the communal account, @minnowsupport, by Doetwa from the Minnow Support Project. It's a witness project run by aggroed, ausbitbank, teamsteem, theprophet0, and someguy123. The goal is to help Steemit grow by supporting Minnows and creating a social network. Please find us in the Peace, Abundance, and Liberty Network (PALnet) Discord Channel. It's a completely public and open space to all members of the Steemit community who voluntarily choose to be there.

@doetwa Thank you for upvoting my first post on steemit: FATHER'S DAY Vs MOTHER'S DAY

You're welcome! I liked the article.