The true cost of the TSA #optout

Adam interviews the public on the pros and cons of the TSA.

Whoever has the top comment on this post after 24 hours can claim a free signed copy of FREEDOM! by sending me an email with their address to [email protected]

a great interview. was a delight to watch this

@adamkokesh it been a long time tha t have been hearing about TSA, with this your detail interview with the public, this is when I started to understand what it all entails. this really makes people to express themselves and am very sure they are been loved as they were been interviewed. I think by doing this via media will also help. Have a good day and I'm really glad about effort you invest to educate people and give real information.
thanks a lot keep it up.

Hmmmm. I think one day airline transportation will be de-centralized; and that way travelers will be in position to dictate who provides their travel security. YEA!

a great interview brother @adamkokesh, thank you for providing great content as usual.

great interview @adamkokesh.
thanks for sharing.

I totally support you @adamkokesh ....
Freedom is need for our comfortable life..

The past 12 months delivered further, faster erosion of America’s own democratic requirements than at any different time in memory, damaging its global credibility as a champion of desirable governance and human rights.

It's so hilarious watching people getting owned #TSACOPOUT

The worst part is that people know how bad situation in the country is no matter what media talks. I'm talking bout my country cause it would be hypocritical to tak about yours. People are not dumb, but they're scepting and trying to find a hope in every piece of life and situation to make it better for them and their families. How would you help all people to feel like real citizens, free as birds with the real right of speech?

Citizens and majority should be heard because they felt roughness of real life on their skin. It's not easy to live in poverty and act to be happy when you know you can't offer you kids or family what they want and need. Have a good day and I'm really glad about effort you invest to educate people and give real information.

TSA was created as a response to the September 11, 2001 attacks.The TSA requires that passengers show a valid ID at the security checkpoint before boarding their flight. At the airport security checkpoint, passengers are screened to ensure they are not carrying prohibited items. These include most sorts of sharp objects, many sporting goods such as baseball bats and hockey sticks, guns or other weapons, many sorts of tools, flammable liquids. In November 2010, the TSA began putting backscatter X-ray scanners and millimeter wave scanners machines into airports. The TSA refers to these two technologies as Advanced Imaging Technologies, or AIT.
Well I think those people had any idea that they will be filmed at the airport, lucky them got themselves posted on such a platform by the great @adamkokesh many of them thought that its a good thing introduced after the 2001 attack, but some of them thought its just the wastage of time. But according to me TSA is really doing a great job, number of people used to smuggle drugs, weapons and things like that via the airports, but by the help of TSA it has reduced a lot. Keep it up TSA. 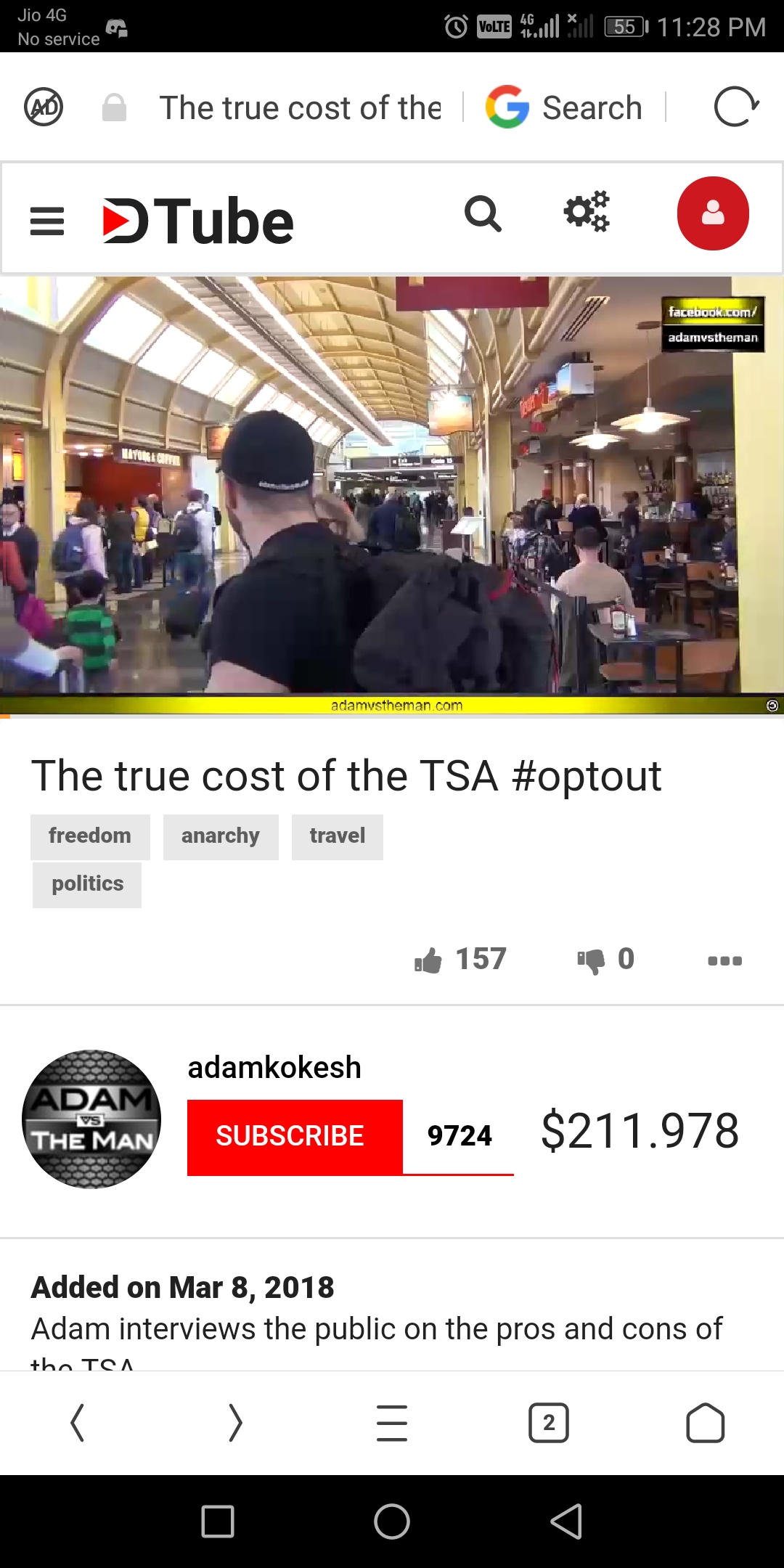 this is very great post nice video . I think the beast , so excellent your job

The TSA has been a major reason for decrease in the travel crimes over a decade or more.So I guess that TSA was created in response to 2001 attacks.The public face of the 60,000-member TSA is at airport security checkpoints, but the agency’s mandate is to protect all modes of transportation against attacks, monitoring rail stations, transit systems and bus terminals.Chiefly concerned with air travel, the TSA employs screening officers in airports, armed Federal Air Marshals on planes, and mobile teams of dog handlers and explosives specialists. Great interview by the way.

this video is really very inspiring and full of education. I am very happy to see this video. thank you for sharing friends.

This is very informative video and also educative valuable.i am got the pleasure to watch this video.Thanks a lot.keep it up

Congratulations @adamkokesh, this post is the third most rewarded post (based on pending payouts) in the last 12 hours written by a Superuser account holder (accounts that hold between 1 and 10 Mega Vests). The total number of posts by Superuser account holders during this period was 1404 and the total pending payments to posts in this category was $10459.21. To see the full list of highest paid posts across all accounts categories, click here.

Hey, great video! Would you mind checking out my channel and letting me know what you think?

Vote me my friend

Fear has been the favorite tactic used throughout history to control the population. It was the Roman emperor Julius Cesar that said, “I don’t care if they respect me, as long as they fear me... I will be in control.”
9/11 was the greatest move made by the Elites to get Bush Junior re-elected... of course Bush Senior was CIA. After 9/11, most Americans gave away most of their freedoms to the false sense of security. Those that resist were shunned. Airports were used to spend money on their own security.... now they get to harass customers for free. Thanks to the 8.1 billion dollars siphoned from tax payers. Thanks TSA for molesting me in public. 8.1 billion a year and nothing to show for, not even one terrorist caught.

When will we learn that we can’t fight terrorism and win... because you can’t fight an idealistic concept. Terrorism usually occurs when you put someone in corner when there is little hope.... even a rabbit will fight back if you corner it. Great to see this kind of content on dtube.

The truth about @berniesanders! :)