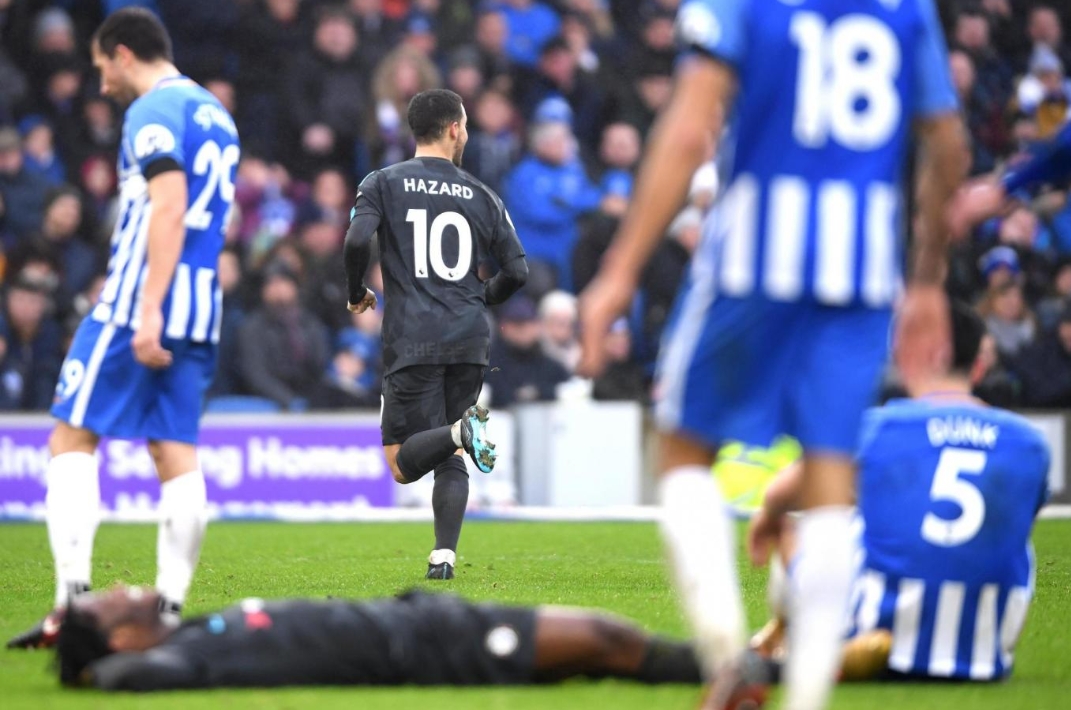 Eden Hazard scored twice to inspire Chelsea to a 4-0 win over Brighton at the Amex Stadium on Saturday as the Premier League champions overcame a number of selection issues
With top scorer Alvaro Morata and Pedro suspended and four other players, including Thibaut Courtois, sidelined with injury, Hazard rose to the occasion to prove Chelsea's talisman once again.

Brighton had two penalty appeals turned down and, with 13 minutes left on the clock, Hazard made a fine run into the box and bagged his second of the afternoon before Victor Moses added a late fourth to move Chelsea level on points with second-placed Manchester United.

The Belgian, who was a menace for the visitors throughout, latched onto a failed clearance and proceeded to smash the ball into the back of the net.

With Chelsea fans still celebrating in the away end, Willian made it 2-0 just three minutes later following a superb team passing move.

Brighton did not seem put off by the score-line in the second half as Chris Hughton's men admirably heaped pressure on Chelsea's defence and could have scored when, with Andreas Christensen briefly off the pitch to receive medical treatment, Davy Propper rattled the crossbar with his header.

Christensen was not long after forced off with injury, and replaced by David Luiz for his first Premier League appearance since October 28. The Brazilian immediately ran over to where Chelsea were about to take a free-kick, but let his compatriot Willian fire it to goal where Ryan guided it onto the post and away from the goal.

Chelsea did eventually get their third and it came in the 77th minute when Willian won back possession in midfield before passing to Hazard. The Belgian, clearly in inspired form, raced into the box and slotted past Ryan before Moses added a fourth late on after latching onto a superb pass from substitute Charly Musonda.

Good game from our lads, did you watch it?

I looked, great, but I'm afraid Hazard will not stay for a long time at Stamford Bridge..

Well I actually do think he will stay, at least two more years. He really is top class player and I admire him a lot, but even if he goes Chelsea will find replacement for him and keep going. No one is bigger then club, not even Hazard, so Chelsea should be fine.