Oh fries, how to be Belgian and do not want to talk about french fries!

This is a must in Belgium and any good Belgian who respects himself eats at least once a week minimum!

Alone or as an accompaniment to a dish such as mussels fries, steak fries, fried dumplings or flying with fries, we marry them with a little bit of everything, it's like the color black or the jeans, it go with everything; o)

My son even had the pleasure of eating at the restaurant during our last holiday in Spain spaghetti bolognese with fries, not very dietary I agree with you but what has it ate; o) 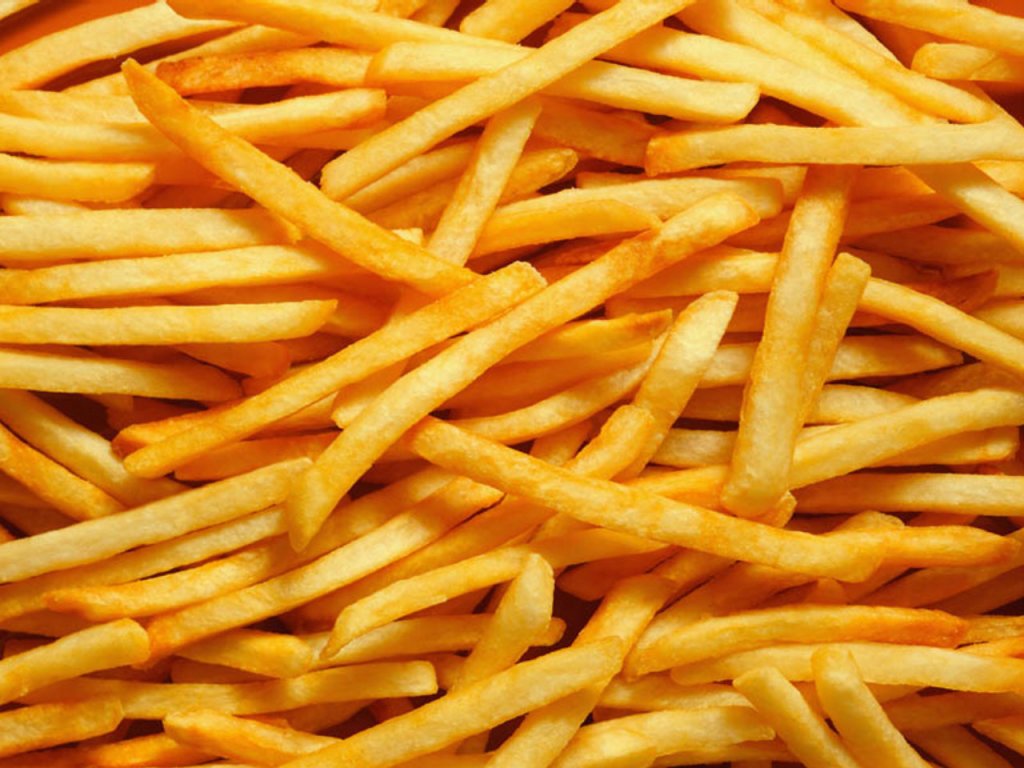 Not to mention a good sauce that accompanies them, mayonnaise, ketchup, mustard, samurai, ... All we want as long as it's good; o)

We find fresh, pre-cooked, frozen, ready-made to be tasted in our famous chip shops or barraque (caravan that serves fries, like a foodtruck).

The fries is a potato stick cooked in animal fat or vegetable oil.
Previously they were cooked in a pan or in a pot but from the twentieth century began to use a deep fryer.

Personally, I do not have a fryer because it's too much maintenance and it's fat, j'ope, when I'm not going to get them at the chip shop because that's where they are better, unless they are made from scratch for frozen French fries. It's more practical and less fat.

We distinguish different names of fries according to their cut:

Since the end of the twentieth century, the largest amount of fries is used by fast food, which receives them pre-cooked and frozen.

Cornet or container the dilemma Until the 1980s, fries were most often served in a cone-shaped rolled paper, the cornet. The chips were then served in plastic or cardboard trays, the tray. Personally, french fries seem better when they are in a cone rather than a ravier, it's like drinking wine in a beer glass.

In Belgium, in the chip shops, it is often left to the customers, a cornet or a tray. The cornet is often preferred by amateurs; it contains more fries and the fries stay hot longer as you eat them as they are buried under hot fries. 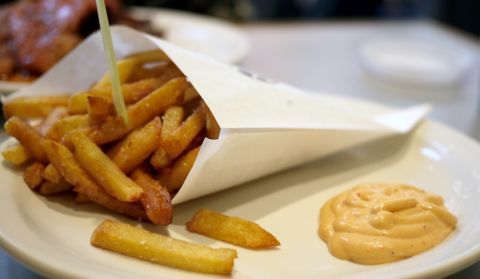 The choice of the potato

To prepare good homemade fries, the first step is to choose your potato which is the raw material. My grandmother repeated it enough
; o)

There are two types of potatoes : farms and meats.

To make french fries, it is better to favor mealy potatoes because their high starch content makes them crispier and lighter.

To make fries, the potato champion is Bintje. If, however, you choose a firm flesh variety, it is better to take the Charlotte. It gives fries to the firm and melting texture.

We cut the potatoes in sticks of a size that we like, big thick or fine style match.
There are also mechanical devices for cutting fries that are good and save time.

In order for French fries to not stick together during cooking, it is advisable to wash them well to remove starch. Although some prefer to leave the starch because they say that it is precisely the starch that brings the crisp to the fries. To you to see, test both and you will see ...

Anyway, they must be wiped before cooking to prevent the water from turning into steam once in the deep fryer and dissociate the cooking oil and lower the temperature of the fryer oil.

The ideal way to make good tasty French fries is to use animal fat. In Belgium, beef fat is most often used.

On the other hand, vegetable oils like peanut oil for example, are not bad either because they are less expensive and less rich in bad cholesterol.
The vegetable oil can be reused about fifteen times while the animal oil allows less cooking, a dozen times maximum.

It must be done in two stages, in fact, the fries requires two firings, a first at 160 ° C, the time it becomes a little soft under the fingers and a second at 180 ° C to finish cooking.

After the first baking, drain on paper towels and let cool for about ten to twenty minutes.

Then, it is necessary to increase the temperature of the fryer to 180 ° C (attention from 180 ° C it becomes bad for the health and from 190 ° C it becomes carcinogenic) and put back to cook two three minutes, the they turn golden and crisp.

Be careful not to overfill the fryer otherwise the chips are too tight cook less well and may stick together. It is better to cook several batches than one too much.

Little trick, if you want to save time, you can proceed to the first stage of cooking, let them cool on paper towels and then freeze them in packages. That way, the day you want to do it, you just have to take them out of the freezer and proceed to the second cooking. You take an egg yolk (of chicken raised in the air of course), a teaspoon of mustard and then with an electric mixer you start to mix while letting flow neutral oil, peanut or sunflower for example, you will see it's magic, the mayonnaise is gradually formed. Then you stop when it seems enough, the more oil you put, the more mayonnaise, no need to add egg yolk or extra mustard.

Fried potatoes are delicious but over-eating , It may lead to obesity and double-weight but delicious , With mayonnaise, tomato sauce and some steaks.

The most famous fast food in the world

Hmmm! Look yummy! I can't pass over fries with some nice ketchup in it.

This kind of food is for everybody that's why kids and adults love this. I like the ones with sour cream and onion with a little chili :)

yum yum, everything I love, I can make them crispy and tender to the interior a treat.

I like it most french fries. thanks for sharing and reminder me that i should eat it , haha....@lndesta120282
Good job man, keep it up

Spicy😋😋looks so tasty, thank you for sharing abt food preparation , adoration for your writing

In Belgium and Netherlands there are some fantastic fries! Very good! Beautiful post!

Very nice! I love the step by step pictures. I’m cooking challenged so that really helps!
Looking forward to trying this recipe.
Thanks! Blessings
I appreciate your support and am grateful to be here on Steemit.
I welcome any feedback you have to offer as well as an upvote!

I would love to visit there. Great article!

What a recipe in Belgian ideology. Never knew french fries preparation is actually is fun and licking finger. Have been shopping for it all time without considering its make up process and also the home made mayonnaise,i think i will give that a try because of its process and sure its going down with slices of bread..yummy. thanks for the much recipe. 🖒🖒

Its make yummy Thanks dear @lndesta120282

Hi! I'm new here. Really need help. Please vote My articles. I vote for yours. They are very good. Thank You!

French fries is my absolute favourite.....I love it thank you for sharing with us..

It's so nice to see other foods, American fries are typically, pretty terrible. All the fast food places around here make thing tasteless fries just covered in salt and grease and call it a day. I love seeing the foods we take for granted as fast food being made into actual cooked foods, not thawed and fried.

i also like french too much its more tasty when you drop some mayonnaise.

Congratulations @lndesta120282, this post is the sixth most rewarded post (based on pending payouts) in the last 12 hours written by a Superuser account holder (accounts that hold between 1 and 10 Mega Vests). The total number of posts by Superuser account holders during this period was 1631 and the total pending payments to posts in this category was $19011.20. To see the full list of highest paid posts across all accounts categories, click here.

Nice post on the best food or one of. However, mayo should NEVER go on fries.. That is just me!

Hai @indesta120282 how are you, iam a new steemian, i just talking about food please support me, nice to meet you

Yes potato chips is good. Whether it be French Fries or what we think of as the 'Belgian variety' of fatter chips, they're all gorgeous. A company opened a chain called "BELGO" a few years back and they are so good, especially the one in Covent Garden in London. They also serve a great variety of beers. "Chips with everything" is a very successful play by playwright Arnold Wesker and it still gets put on today. So you see your post struck a chord! Thank you.

I love fried chips, they look delicious, ou can also make baked goods that are very crispy but a little healthier

great recipe, thank you:) I will try it later:) belgian fries are my very favourite. The best dip for it is joppie sauce.....an orgasm of taste^^

After reading this post that I'm starting to crave to these and thank you for ruining my diet (in a humorous manner).

It's funny how so many people would give me weird looks when I dipped my fries in mayo, or my favorite, chipotle aoli. They are missing out!

its very nice post. hope that it will be very interesting food.so thanks for sharing with us...so great job..

my favt when I get hungry

Those fries look extremely good!!
Long ago I had some over in Germany that had
some spice on them, I think it was paprika.
I'm not really sure, is that something regularly used?
They sure tasted good lol