My last China Food Menu blog also featured an Egg wrap but this particular wrap is completely different and very famous throughout China. Depending on where you go, every city has their own local variants but the two biggest would have to be the Shandong 山东 egg wrap and the Beijing egg wrap. These egg wraps are usually found on the street in a little push cart but recently there have been a lot of actual restaurants popping up dedicated to this wrap and a couple other small snacks. 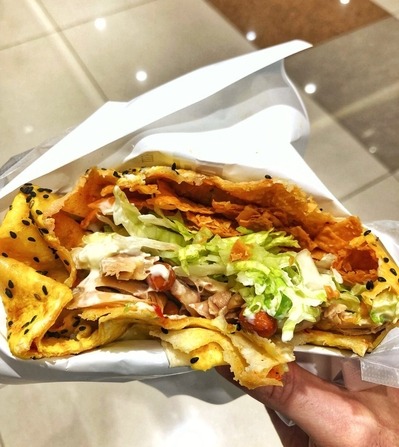 What is the egg wrap?

It's a thin light tortilla made by cracking an egg on top of a batter as it's cooking fresh on a big round griddle. There's a large selection of fillings to stuff it with but every jianbing shares at least 3 fillings in common; a fried wanton cracker, lettuce and their special sauce. Depending on where you go there is usually a variety of meats and vegetables you can add in as well such as sauteed potato hash browns, chopped up bbq chicken leg meat, braised pork, bacon, cheese and more. 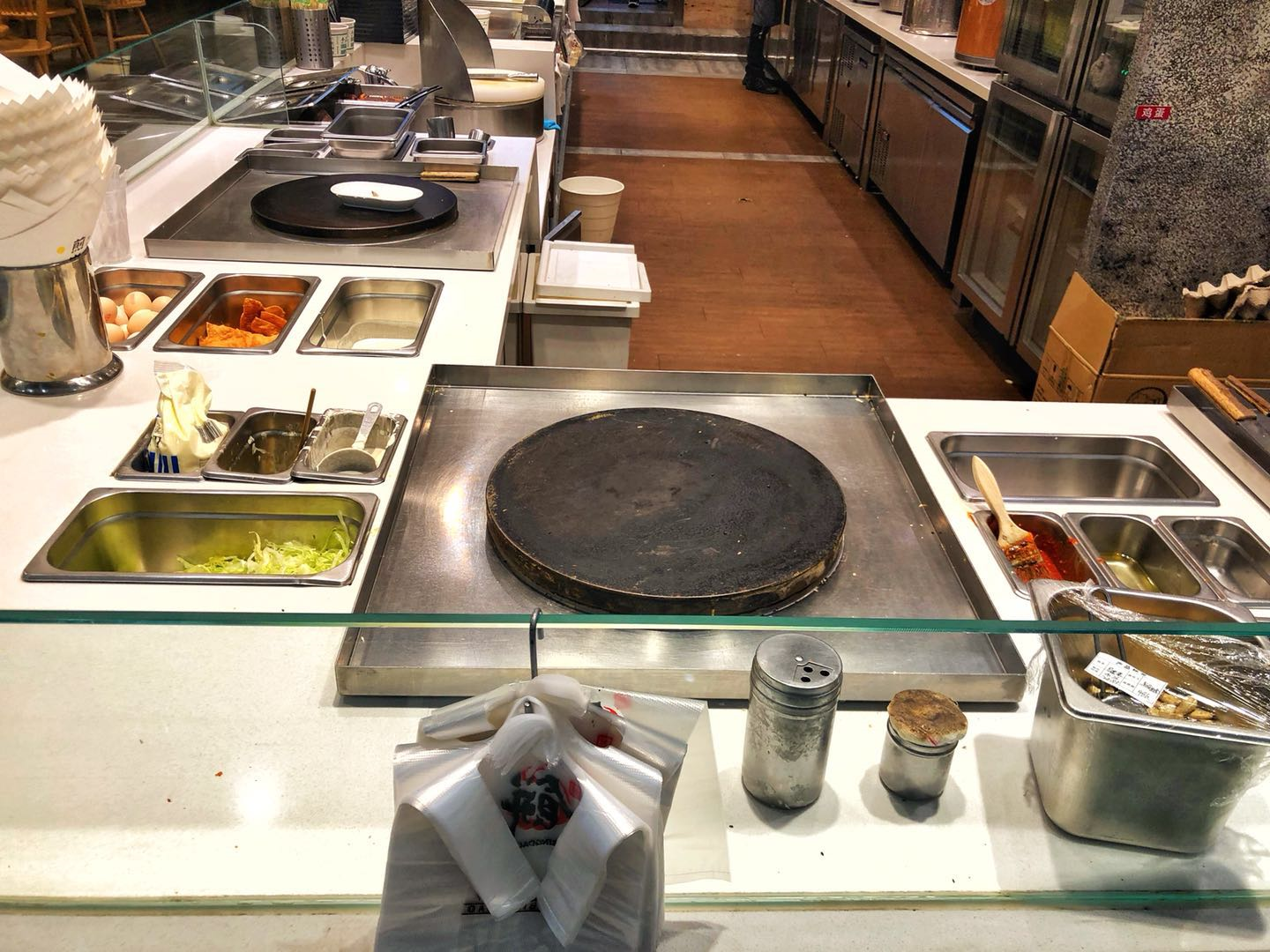 They pour a liquid batter onto the hot griddle and quickly spread it around with something that looks almost like a windshield wiper. As soon as it has started to thicken up they crack an egg on top and spread it around the entire tortilla. As the egg is cooking onto they sprinkle it with black sesame and use a thin knife like scrapper to scrape under the bottom of the tortilla so it can be flipped without sticking. 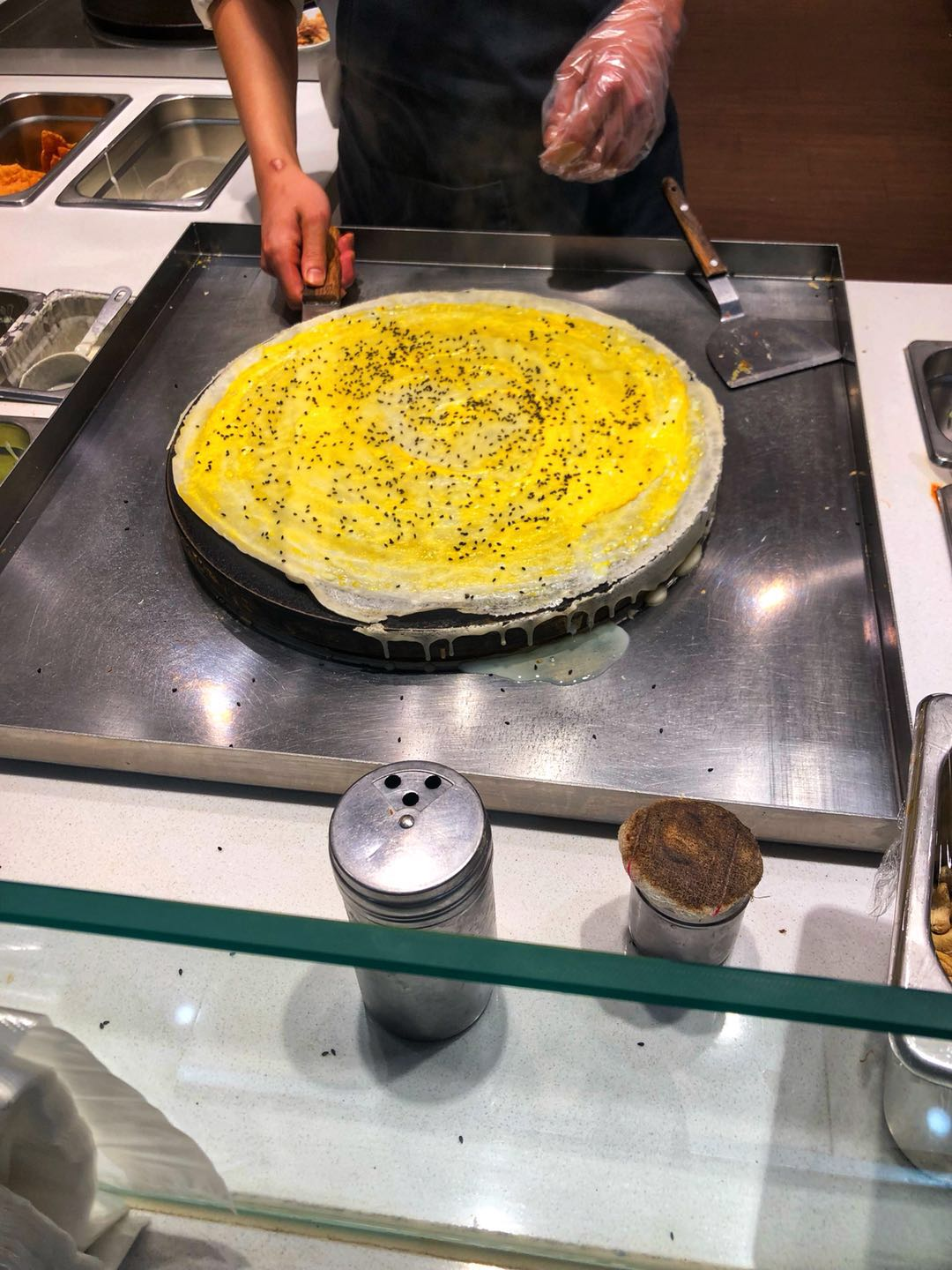 They flip the tortilla and take a ladle of their special sauce and spread it across the entire tortilla. Depending on the place they might throw some other seasonings such as cilantro or spring onions and then place 2 crispy fried wanton crackers right in the middle. They lightly smash the crackers and add a bed of lettuce and all the other fillings that you choose. Some places add a sauce on top such as a mayo drizzle to finish it off before wrapping it up. The wrap is very hot and has a beautiful yellow color with a nice contrast from the black sesame seeds. Depending on the fillings you pick, the taste will always be different but the wrap is very light, soft and eggy. There's a very nice variation in textures when you bite in from the soft wrap and the crunchy cracker. I had 2 jianbings today, one was from a restaurant called Pack Monster and the other was from a famous jianbing restaurant called jianbing dao. The first one was a pork chop with black pepper sauce, corn and cheese while the other was pulled chicken and peanuts. I honestly can't pick my favorite because they were both fantastic!

If you visit one of the restaurant style stores you pay from 1.50$ to 4$ depending on the fillings you choose. If you buy from a street vendor however you could pay anywhere from 70 cents to 3$. They're big, filling and a great treat!

Pulled chicken and peanut. This was my personal favorite because the pulled chicken was very moist and well done and whole peanuts is something completely new to me for this egg wrap so I found it really innovative! 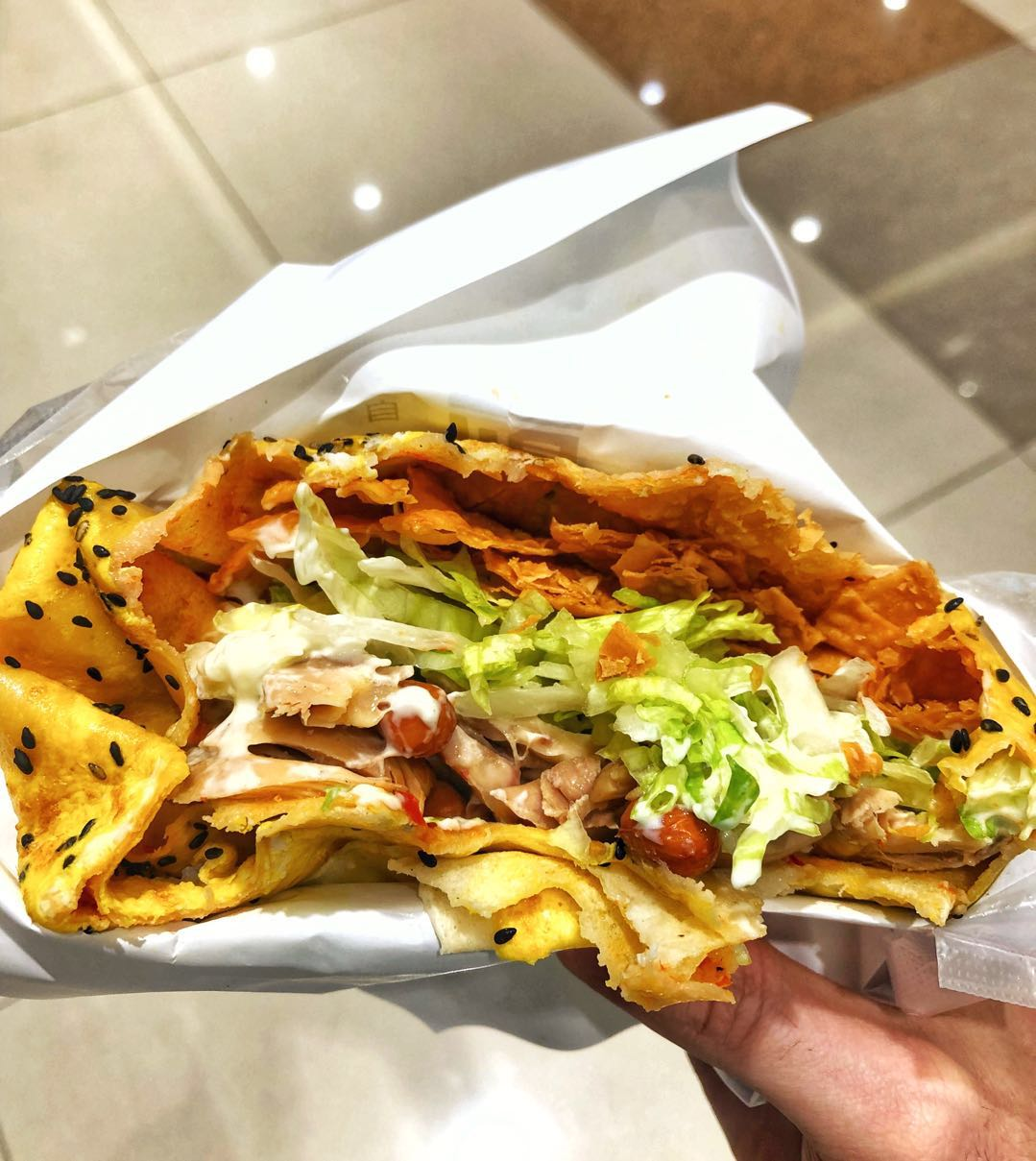 Black pepper sauce pork chop with cheese and corn! The sauce mixed with the cheese for a really awesome flavor and I loved the little bits of corn that added a nice little popping sensation to the texture. This looks delicious, I hope I get to go to china just to eat street food, and maybe buy cheap electronics

The entire street food world here is huge! There's so much good food everywhere. Hope you have the chance to visit one day.

Wow! that looks quite delicious. I wish I could upvote, but my voting power goes down as soon as I'm done upvoting the comments left by everyone on my posts. I really wish the voting power would allow us to make more upvotes without draining our power, but I understand why it limits it. I will send you 0.001 SBD instead.

It was very tasty. I like this kind of egg wrap but my favorite is the shandong kind. Instead of a nice and fluffy tortilla it has a more firm and crisp tortilla. I agree with the upvotes, I'm always scared to upvote because I'm worried I'll just waste my upvote power lol.

Yum, a crunch tortilla sounds good with this combo.

Oh woah it looks so delicious
I can't wait to try it!

i really liked the pack monster one with cheese! We can get one on delivery when you come!