After getting my new pizza oven a week or 2 ago, I'v been eating pizza practically every other day prepping 3 dough balls at a time. My pizzas have been consistantly been turning out very very good and I decided it was finally time to invite the crowd over for a pizza party! I prepped 6 dough balls, each going through an overnight proof and 72h cold ferment.

It was a tough crowd to please, we only had 7 people but one was vegetarian and another was super picky and couldn't touch vegetables, feta cheese, salami and the vast majority of ingredients we had. Despite the limitations, I let everyone customize a pizza doing 50/50 on each one for more variation. We had a ton of ingredients; grilled chicken breast, bacon, steak, prosciutto, jalapenos, olives, feta cheese, mont jack cheese, mozzarella cheese, spinach, mushrooms, onions and artichoke hearts. 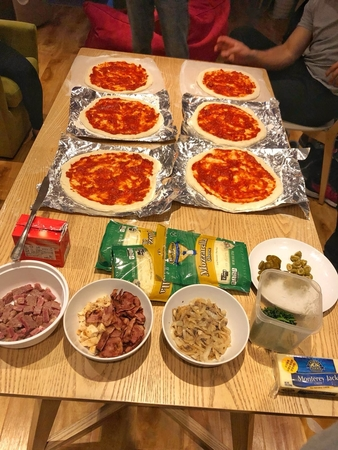 The first pizza turned out great! My friends praised it and said they'd pay money at a restaurant for a pizza like it. It was a huge success and I couldn't have been happier. God knows how embarassing it would have been if the pizza was crap after bragging about my pizzas and showing them nice pictures of them over the past week or two. 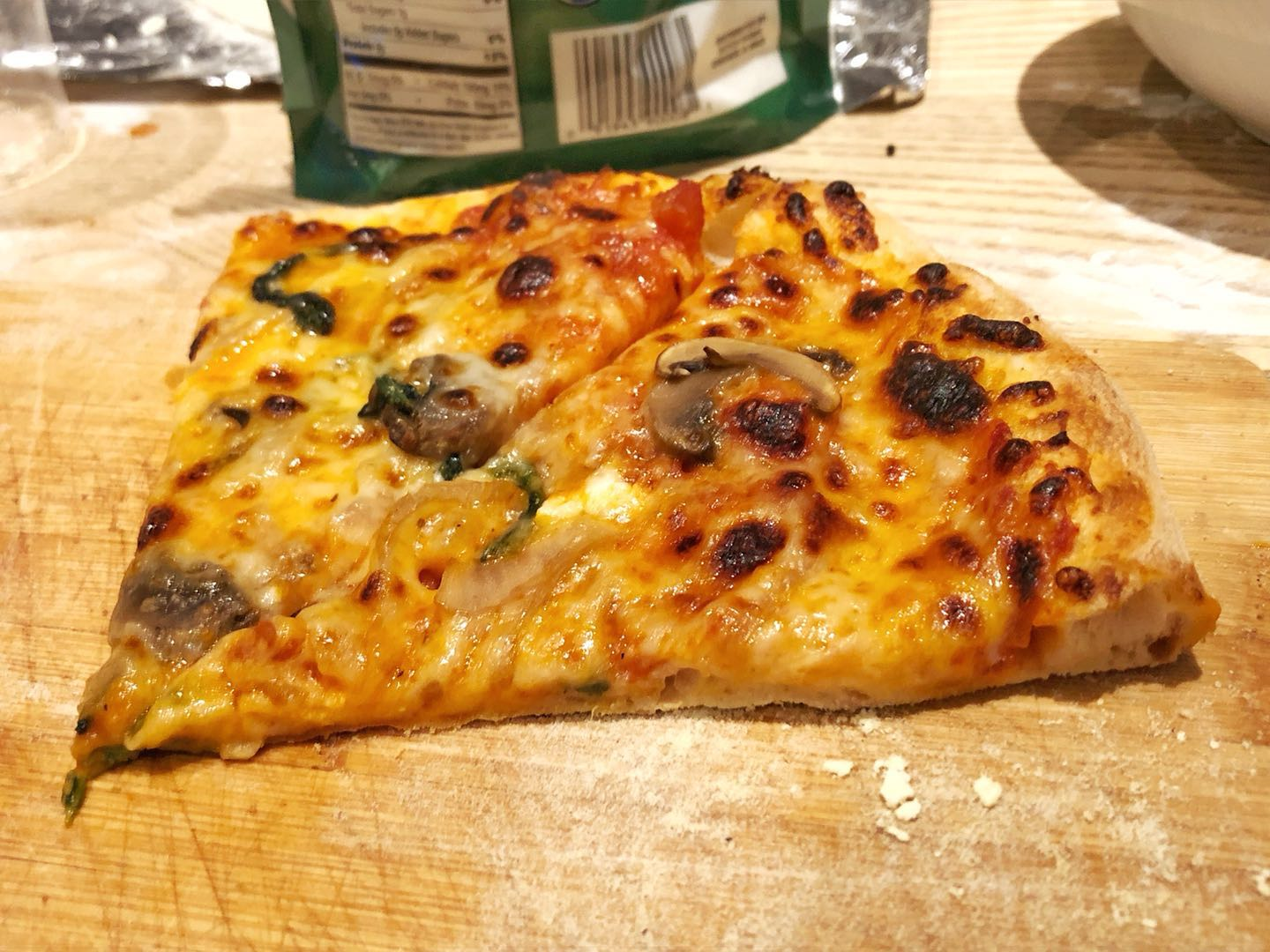 Opening a pizza restaurant is sort of a dream of mine and while it's not exactly a dream for the near future, it's not impossible either. With this new pizza oven I think my pizzas are good enough to sell but there are still way too many things preventing me from opening a shop and the party's failures is a big testament to that.

Unfortunately, only the first pizza turned out good. It wasn't that the other pizzas tasted bad, but there was a really valuable learning lesson that came from them. To speed up the process and make it more of a group activity, I prepped the pizzas each on their own piece of parchment paper/foil. What I didn't realize though was that the dough would absorb the flour and then stick to the foil after a little bit of time. I was able to get the first pizza off the foil quite easily but that's because it was only topped a few minutes prior. The other pizzas though were completely stuck and I was completely un-able to transfer them to the pizza peel.

Pizza 2-6 all got horrifically stuck to the foil and in our attempts at trying to peel it off the foil, we ended up with ugly calzones. They still tasted amazing and everyone loved them but they were missing the steemit photo-beauty I was going for. It was pretty disappointing but everyone was hungry and despite the mess of these ugly calzones, the flavor was still spot on. We cut each calzone into a bunch of little pieces and everyone dug in. 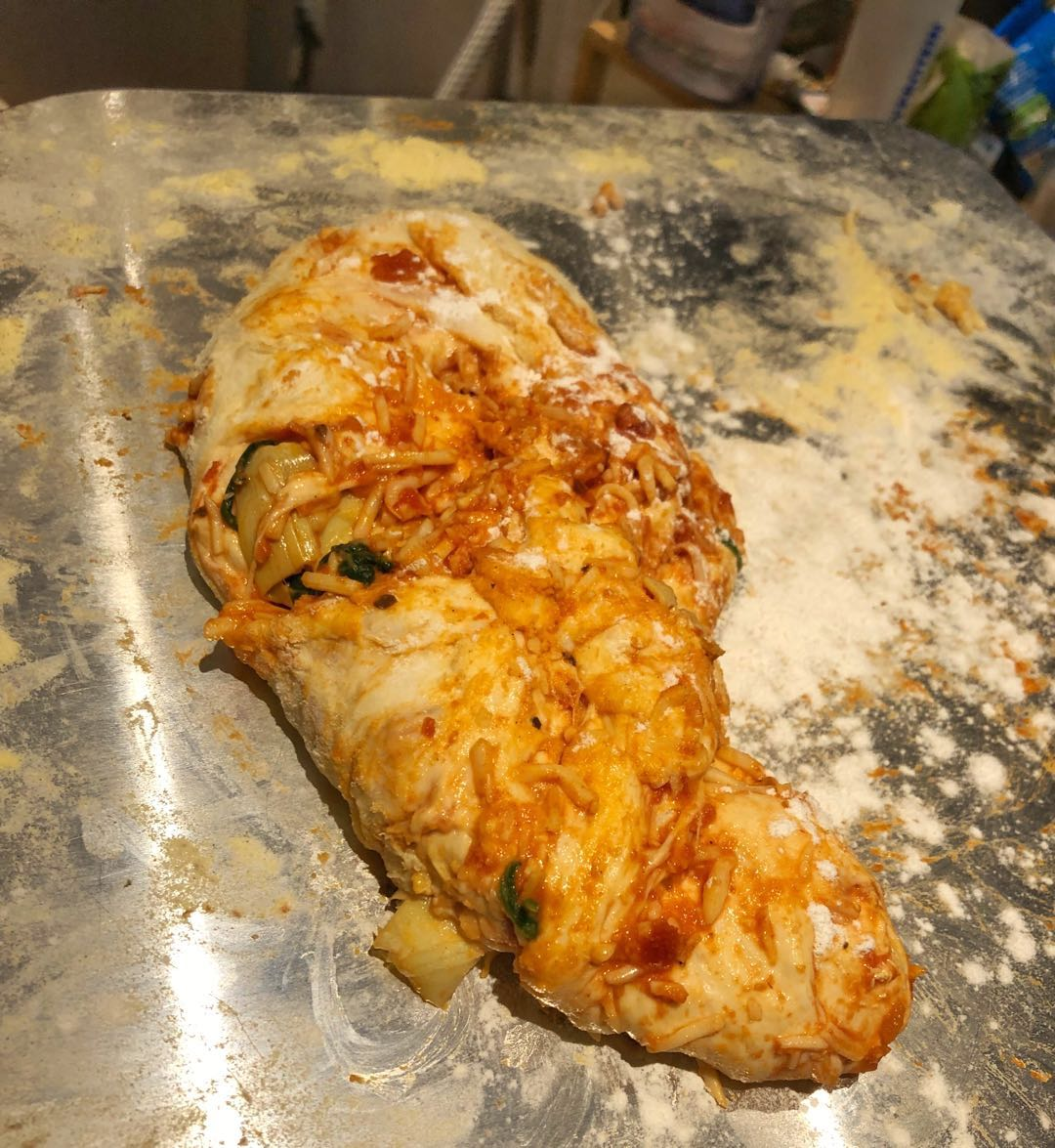 An attempt to save my name

After 5 failed pizzas, I couldn't let it end on such a failure so I quickly made up 3 more dough balls. I actually ran out of flour though and had to substitute a portion of it with wheat flour but that didn't stop the pizzas from turning out good! In fact, the wheat flavor added a whole other dimension to the pizzas and was really succesful!

The dough only rose for half an hour so they didn't really bubble or puff up in the oven but they still had a good texture and taste. Even though they were still really good, they didn't quite match the first pizza we made that night but everyone was more than content with how the new batch turned out.By the end of the second pizza, everyone was super full and we didn't end up making the 3rd. Despite all the failures, it was still a lot of fun and everyone had a great time topping pizzas. The taste was amazing despite their appearance and I learned a valuable lesson on prepping pizzas for the future. No one left hungry or disappointed and we managed to please the whole crowd with such a huge variety of flavors.

As a bonus, I ended up making the last pizza today for lunch and it turned out very good! It was a spinach, artichoke heart, feta and prosciutto pizza! The prosciutto was thrown on after the pizza cooked and the flavors all came together very well! 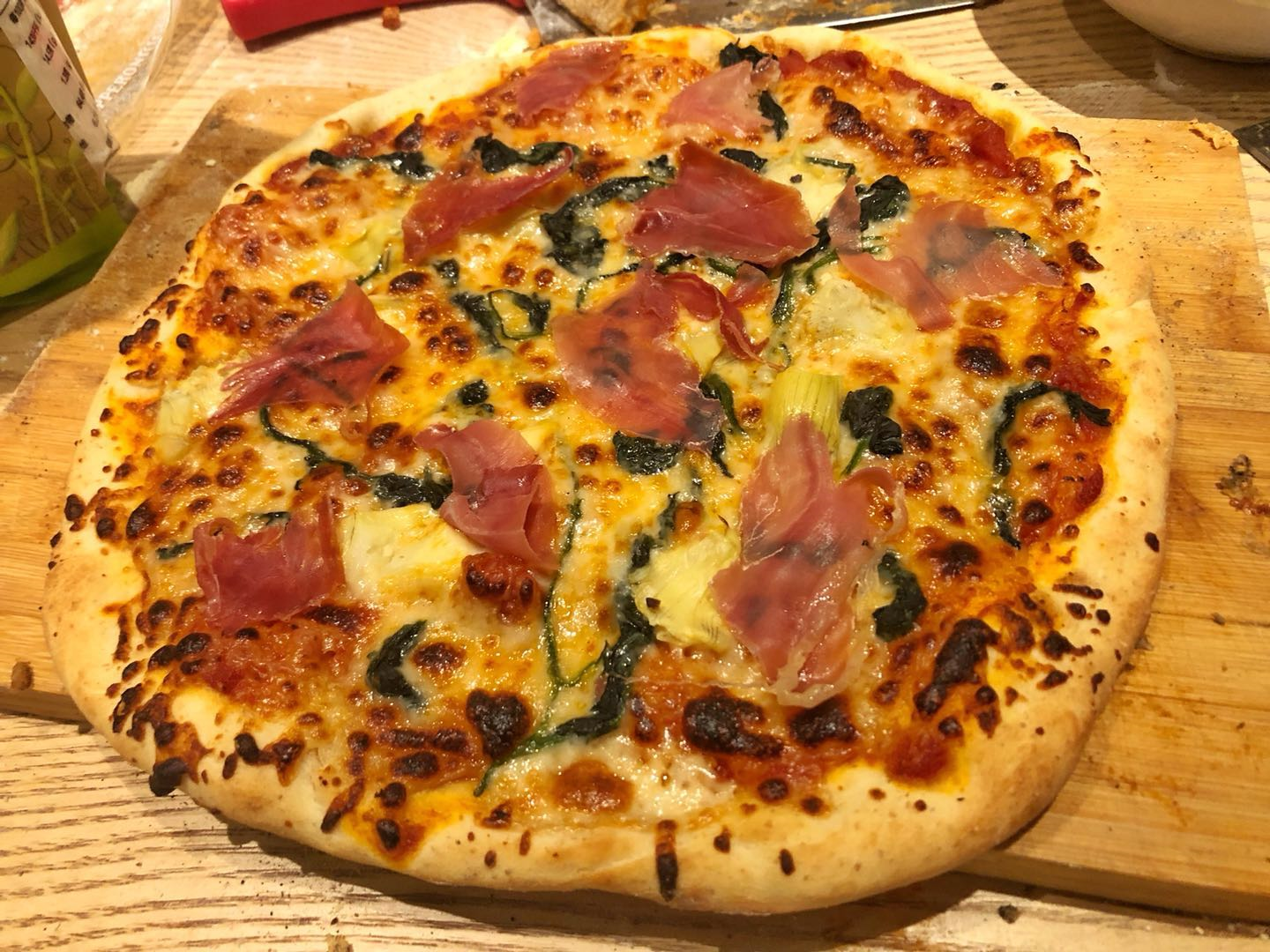