I tried Taco Bell's New Nacho Fries So You Don't Have To. 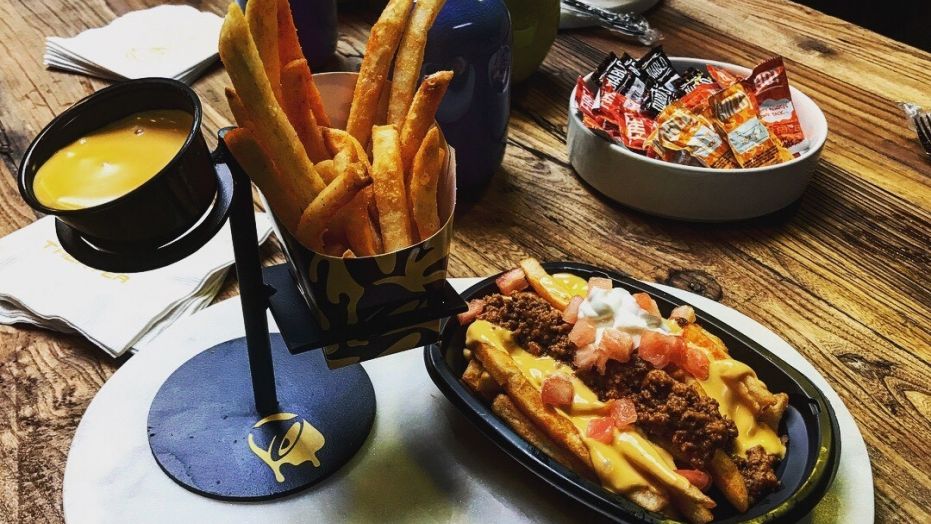 I'm not the kind of person to learn from my mistakes. That's why, just a year after my disastrous experience with Taco Bell's Naked Chicken Chalupa - documented here - I was ready to violate my taste buds once again in service of those who are far less brave (and far less stupid). )
We rolled up to our local Taco Bell early afternoon yesterday, sick of being cooped up all week. I had heard the rumors surrounding Taco Bell's announcement, but I wanted to see what this horrorshow had in store for me firsthand.

There's a couple of ways you can experience these new Nacho Fries. First, you can get the $1 special - a handful of fries and some of that slightly spicy Cheez Whiz that Taco Bell tries to pass off as queso dip. You get what you pay for there, I guess. I wanted more out of life, though - I bellied up to the bar and ordered the Nacho Fries Bellgrande, $3.69 worth of pure meh. 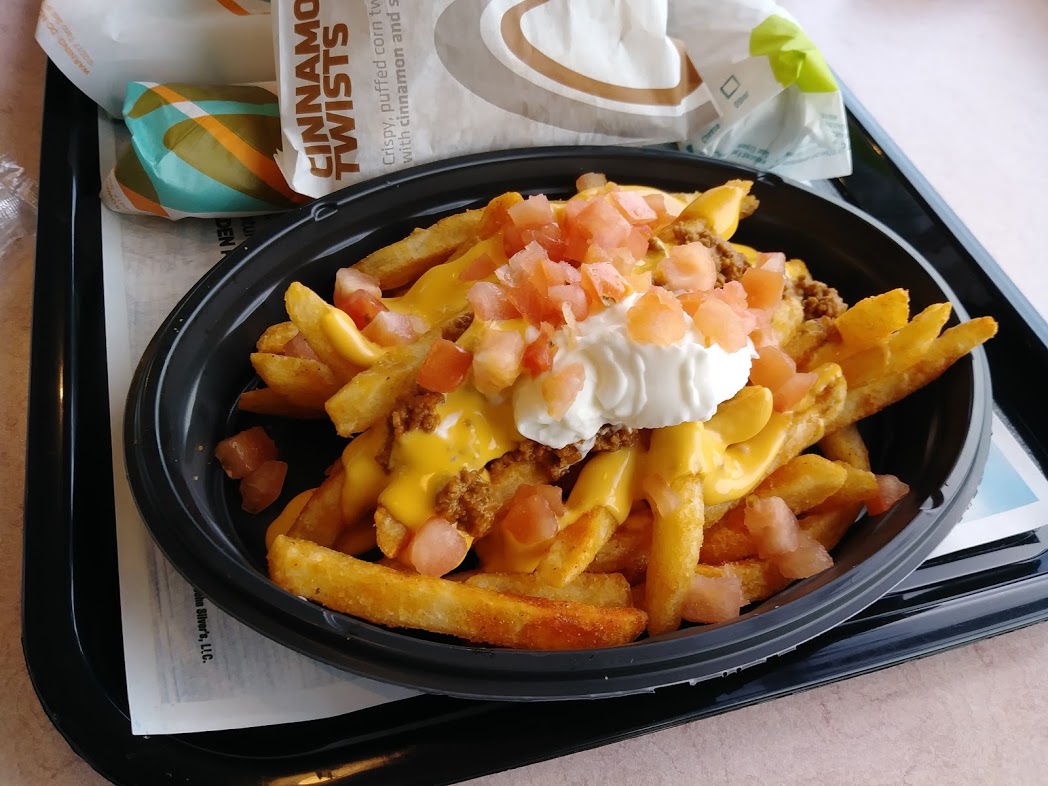 Whether you're getting the $1 version or you shell out for the works like I did, the ingredients of this "meal" are pretty standard. You start with your bog standard french fries, fried until partway soggy, and then seasoned with something resembling the Cheeto dust you scrape off your fingers after a Netflix binge. The result are fries that look like they should be moderately spicy - something you would expect from a place that sells borderline Tex Mex - but the truth is that these Nacho Fries are pretty bland. In fact, if you want heat, you're going to have to reach for Taco Bell's collection of "heat equals taste" hot sauces.

The other ingredients (in my meal anyway) were nothing you wouldn't be able to experience in any number of Taco Bell's products. My fries were drowned in nacho cheese sauce, slapped with a couple of ladles worth of ground taco meat, given a caulking gun squeeze of sour cream, and sprinkled with diced tomatoes as a garnish. Taco Bell literally just swapped out half-soggy corn tortillas with half-soggy french fries and called it a day. Taco Bell's Nacho Fries are not the new taste sensation you've been waiting for. While not nearly as disappointing as that Naked Chalupa I put myself through last year, it was still pretty sub-par. The shortcomings of the other ingredients notwithstanding - the nacho cheese is uninspiring, and does anybody really enjoy the "beef" that Taco Bell uses in its tacos and burritos? - the fries themselves were too bland.

Forget the lack of fresh ingredients, or the inability of your average Taco Bell franchise to deep fry a bag of pre-cut flash-frozen potatoes properly. I understand that not everyone enjoys spicy food. That's why Taco Bell's salsa packets range from mild to hot. I also understand that people going to Taco Bell have a reasonable expectation to experience at least a minimum level of heat in their meals, or in lieu of that a minimum of taste in the form of spices. But the actual french fry component of Taco Bell's Nacho Fries is as delinquent in taste as a John Waters movie, and not in a good way. At least when you watch Hairspray you're enjoying yourself. 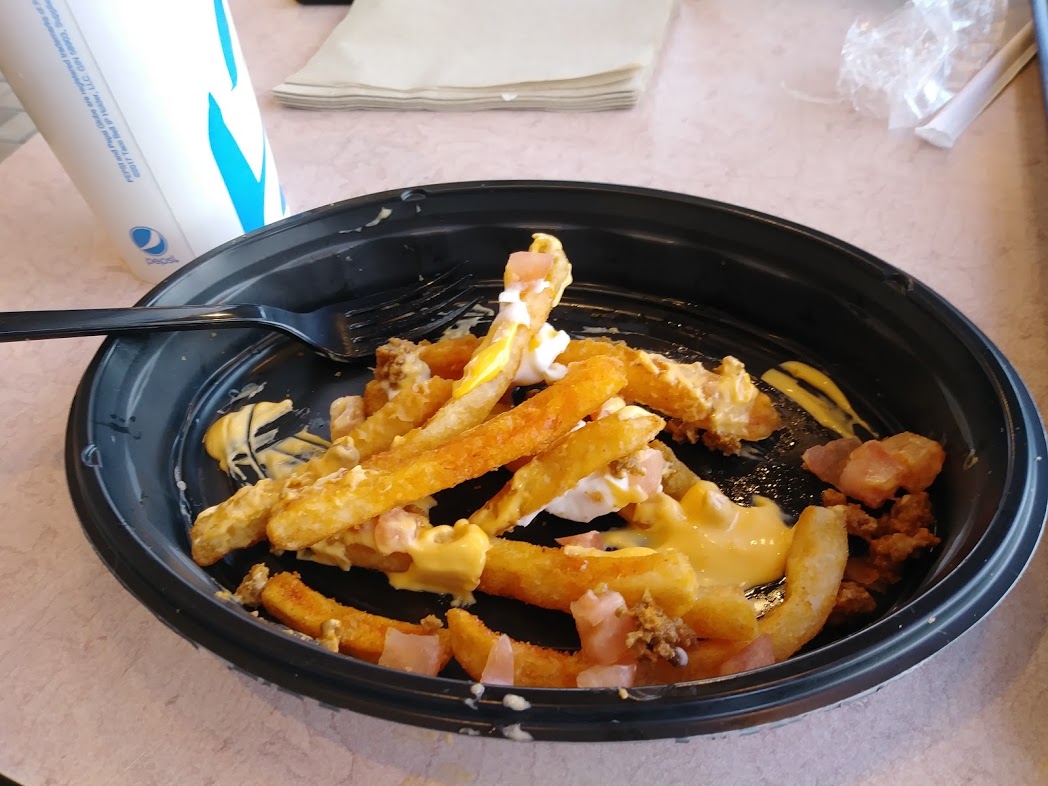 Have you ever had really good chili cheese fries? The kind with really fresh cut and fried potatoes topped with melted cheese, homemade chili, and sour cream? It was fucking delicious, wasn't it? Think about that experience. Hold it in your mind. Treasure it. Cherish it. Wrap it in a cashmere sheet, lay it on a velvet pillow, and lock it in a fireproof safe.

Then, watch Taco Bell drive a monster truck over it, squashing your cherished memories flat and ruining them forever. That's roughly what it's like eating Taco Bell's Nacho Fries Bellgrande - a pale imitation of a much better meal you could be having somewhere else.

There is one thing that Taco Bell has going for it - its pricing scheme. You can get a handful of these mediocre fries and a little plastic ramekin of dipping sauce for $1, or you can go whole hog and get what I had for $3.69 (at least at my local Taco Bell, anyway). It's not a lot of food, and it's not particularly satisfying, but it's (slightly) better than not having anything to eat at all. Best to be enjoyed while heavily inebriated or otherwise impaired after a long night of spending too much money out at the bar or club. Otherwise? Don't believe the hype. Words cannot thank you enough for being the sacrificial lamb!

Humanity owes you a debt of gratitude for your heroics.

No body should be forced to eat these, unless you hate them. Even that may cross some line.

You are a hero.

Just doing my civic duty. Besides, I have a realllly wide self-loathing streak.