SO THAT’S WHAT A TROPHY WEAKFISH LOOKS LIKE!, OR ODE TO A TIDERUNNER 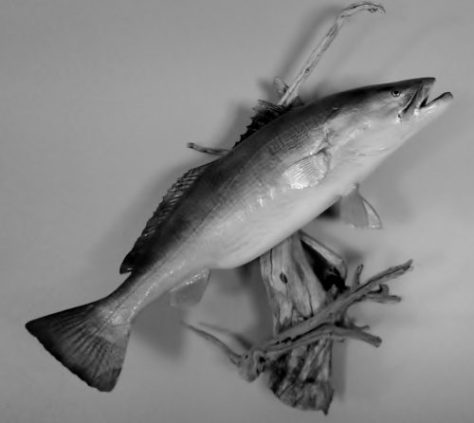 Large and voracious weakfish, often called tiderunners, are one of the most sought after gamefish on the eastern coast of the United States.

My brother, Kevin McCarty, has caught a lot of weakfish in his long salt water fishing career, but no others have come even close to this monster Weakie. He tells me that he neglected to weigh it for longer than he should have, and it surely weighed over 17 pounds when it first came out of the water. Add a pound or two to this guy, and you’re starting to dance around those State and World Record numbers.

It’s been many years since I left our home fishing waters near Barnegat Bay and Long Beach Island, but I have fond memories of throwing sharp-pointed, shiny things into huge schools of boiling weakfish, pinned below a clamorous sky of wheeling and diving birds.

The school was never there for very long, though we could always manage to hook up on a few fish before they disappeared below the chop. Most of the fish were in the 2-3 pound range, and I am quite sure that we never boated anything like my brother’s fish.

But that was in the early 1970’s, and I understand that things have changed quite a bit since then. From what I can gather the weakfish population has suffered a serious decline since the 1990’s. The reasons for the decline are open to debate, but no matter the cause, I am sad to hear the news.

Perhaps they may never recover their previous population counts, but there is hope. There is always hope.

It’s great to know that those marvelous mysteries of my youth have not given it all up quite yet. And if you are very, very lucky, or good, you just might hook a tiderunner weakfish like this too!

*Any other squeteague fisherman out there? We would love to hear from you?

Submit
$0.08
3 votes
0
Authors get paid when people like you upvote their post.If you enjoyed what you read here, create your account today and start earning FREE STEEM!