It goes along the lines, 90% of traders lose 90% of their money in the first 90 days. If you're reading this then you're probably in one of those 90's... Make no mistake, the entire industry is set up that way to achieve exactly that, 90-90-90. That's where Wall Street makes its money.

There are two types of money, 'smart money' and 'dumb money'. You, I and all the other 'retail' traders are 'dumb money'. The investment banks and institutions consider themselves the 'smart money'. Their job is entirely to move the dumb money into the pockets of the smart money, and they do this every day, all day long.

In order to make money in the markets, you need liquidity (stocks being bought and sold). The 'dumb money' provides the liquidity that the 'smart money' uses to get in and out of trades. Trading is a zero sum game, every single penny you make is because some other poor shmuck lost it. For every buyer there's a seller and vice-versa (in an efficient liquid market).

Imagine this, you're sitting watching your favourite stock bumbling along in a range on what looks like a support level. 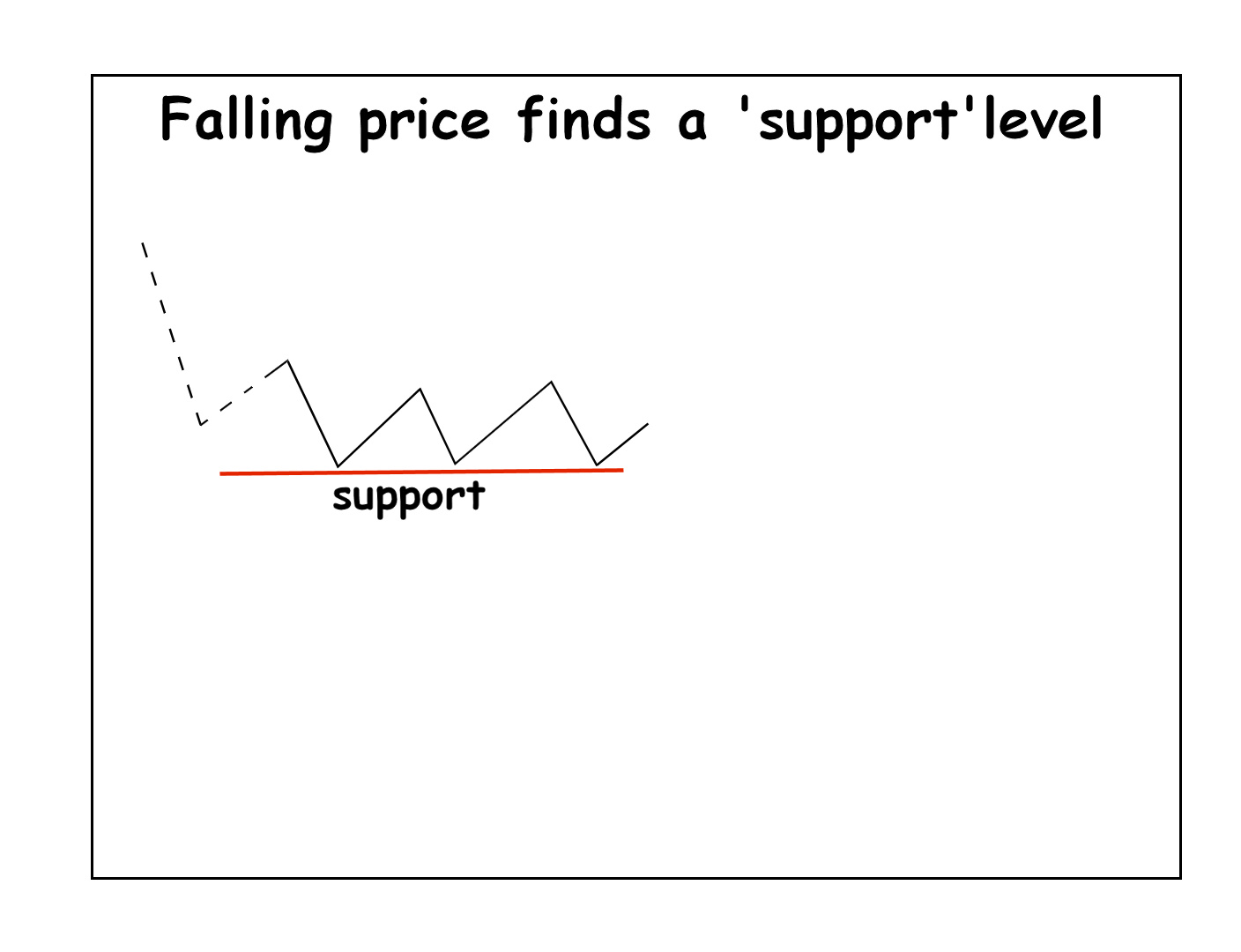 Suddenly, the price breaks through support and starts dropping, and you decide to jump in and get a piece of the action. You put your stop in above the recent high (as you've always been taught) and hit the sell button. 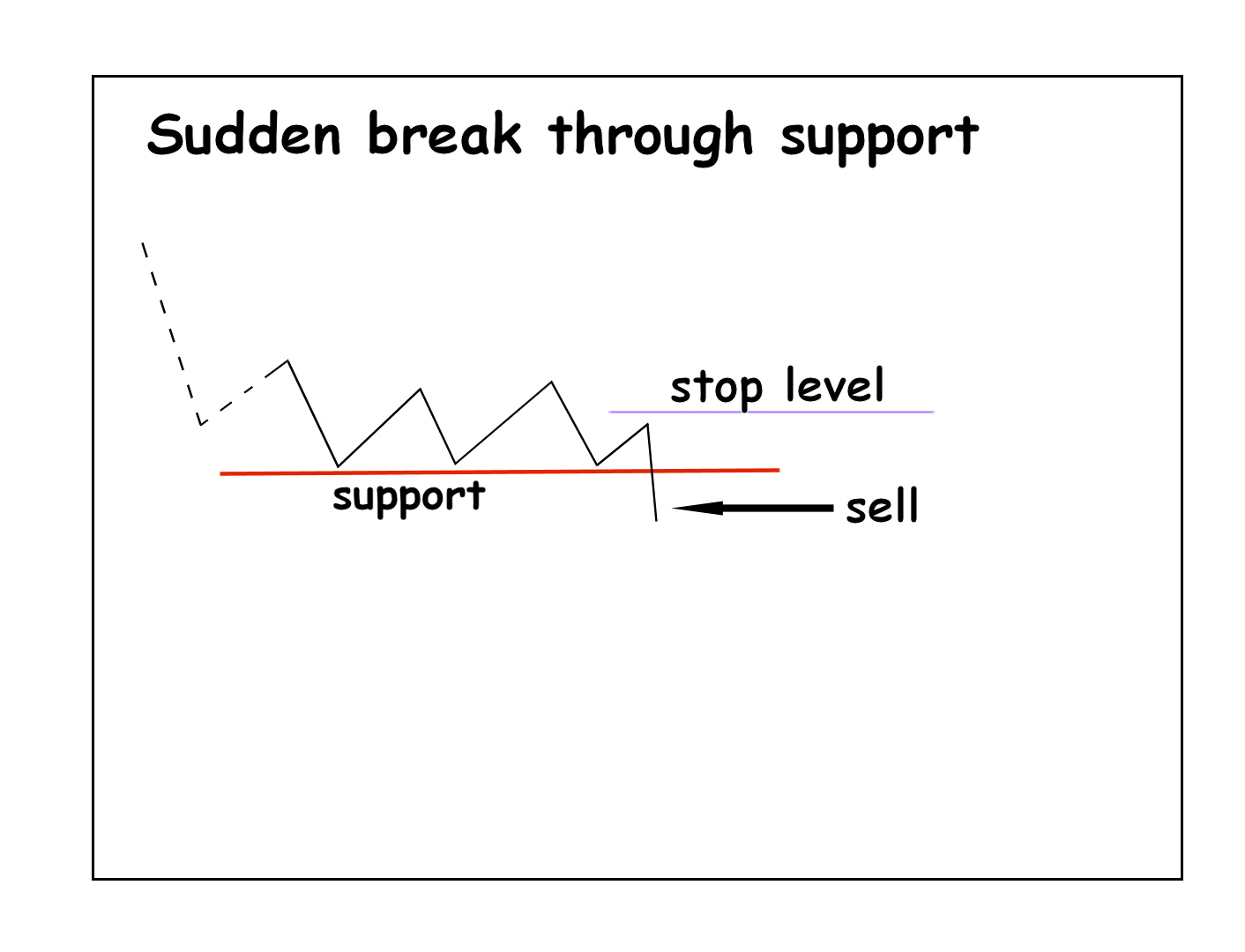 The price keeps dropping and dropping as the dumb money piles into the market, afraid of missing out. Before long, the price makes a sharp correction to the upside and you get stopped out for a small loss (just stopped out by a few ticks, funny how that always happens..) 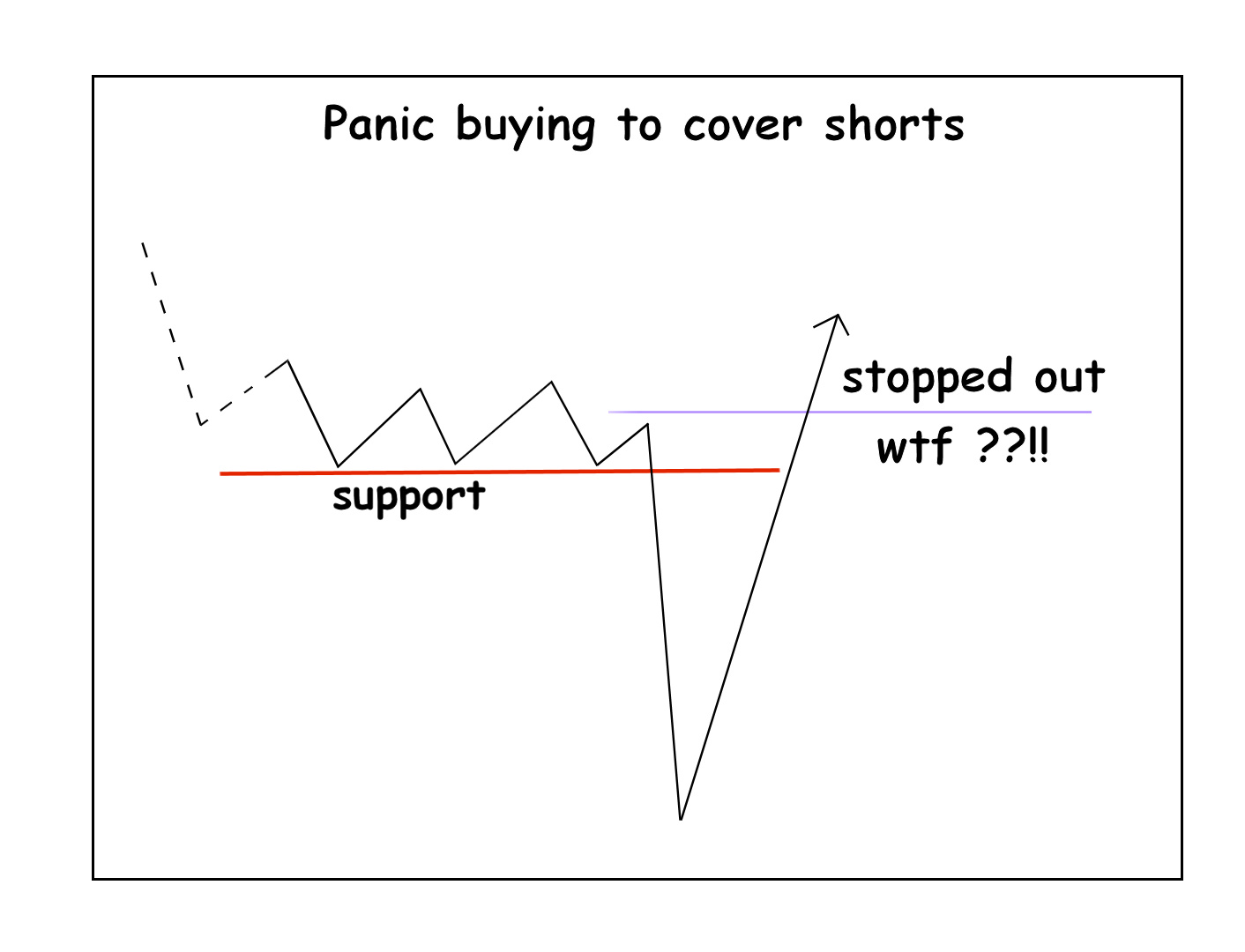 That's dumb money in action. Now let's take a look at what happened from the smart money point of view.

A large bank or institution puts on a sell order of appreciable size. It doesn't even get filled and only shows up on the order book for a few seconds. But it's long enough to spook a few of the smaller houses who think they've spotted something and they start selling. Nothing major, they just think if the large bank is about to sell then something maybe up and they don't want to miss out. 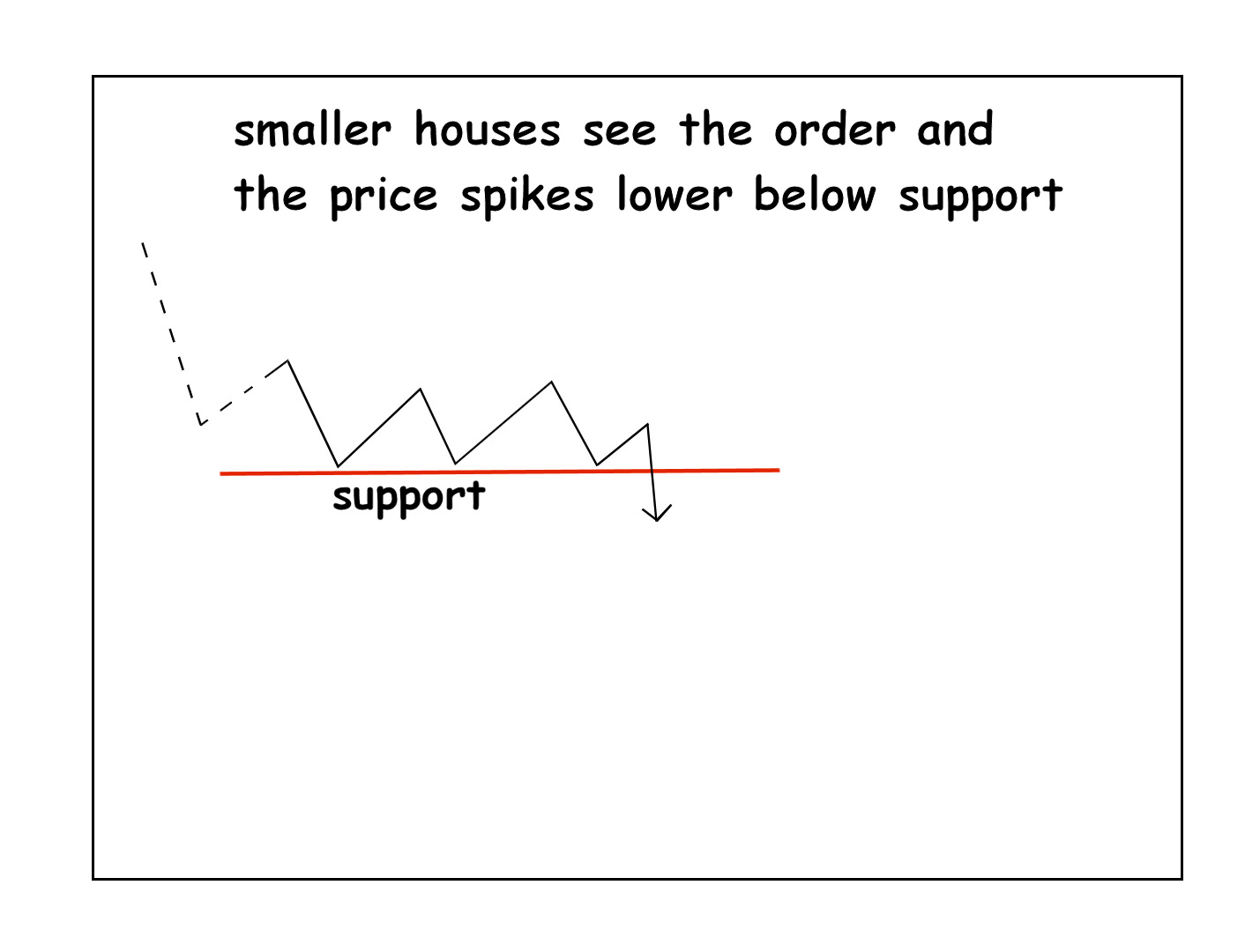 The dumb money catches up and notices the sudden drop in price, and start piling into the sell. Now, as the price is falling, have you ever considered who's buying ?? There must be buyers in a falling market, or you would have no-one to sell your shares to ! Someone is hoovering up all those greedy sellers... The large bank immediately starts hoovering up all those sell orders as the price drops and drops, becoming cheaper and cheaper. 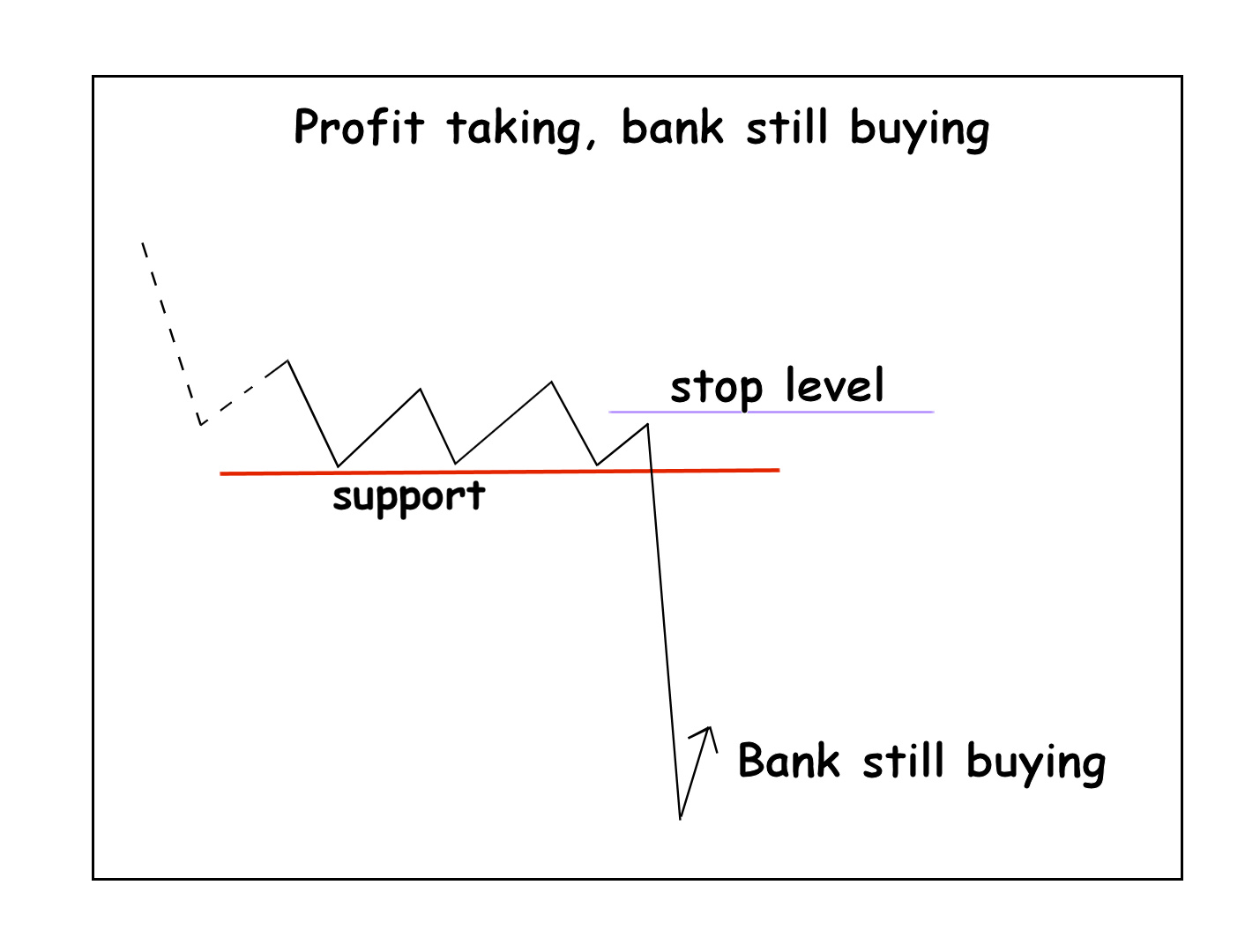 The smart money, they keep buying. And buying and buying, the price starts to correct itself and rockets up. This is aided by the quicker dumb money who can see they've made a mistake and cash out, buying back their sells. Eventually the price is pushed back above and beyond the initial price, triggering all the dumb money stops. Now the smart money starts unloading all it's stock (that it bought from the dumb money at a lower level), using the liquidity of all those stops to get out of the posititon ! That's one of the many, many ways that money is moved from dumb to smart, all day long.

The lesson to be learned here is, if you want to stop being part of the 90% then you'll need to start thinking like the 'smart money'. Large institutions have the power and resources to push and pull prices all over the place, to suck up the 'dumb money'.

So next time you hear some 'guru' tell you "The price is about to break support off the back of a doji, the RSI is overbought and price broke out of a Donchian channel and crossed under the 21 period EMA" (or some other garbage), just remember that the price doesn't care, it'll go wherever the bank needs it to go...

What's this? A new steemian with actual smart advice? You're gonna go places.

Hey man, what's up ? I know you from Minds, I suggested you come here in the first place with your bitcoin mining idea :-) Don't mention my Minds name though if you can remember me, I'd like to keep the two accounts separate if that's ok.

Yeah, minds has seriously stagnated. This place is exploding, though.

Can't for the life of me work out how Steemit works yet.. Pretty much given up on Minds now, only so much nazi shit and conspiracy theories a person can take...

The final straw was the anouncement that they were going to hand out coins to people based on their points, so all the spamming assholes that do nothing but post stolen content all day make out like bandits, and all the people who posted original content got stiffed. A sad day...

That's why I made the jump t o here anyway, although I'm still not interested in crypto lol. I did call that bitcoin bubble though, you have to give me that ;-)

So true...I'm a supply and demand trader and try to identify the smart money on the charts because they usually leave their foot prints behind.

Been talking to other traders about the 90-90-90 rule, we think it's also going to apply to crypto traders, but it's too soon to get any good figures on it.

Sobering thought when youconsider how many crypto traders there are and how many are convinced they're going to make a fortune..