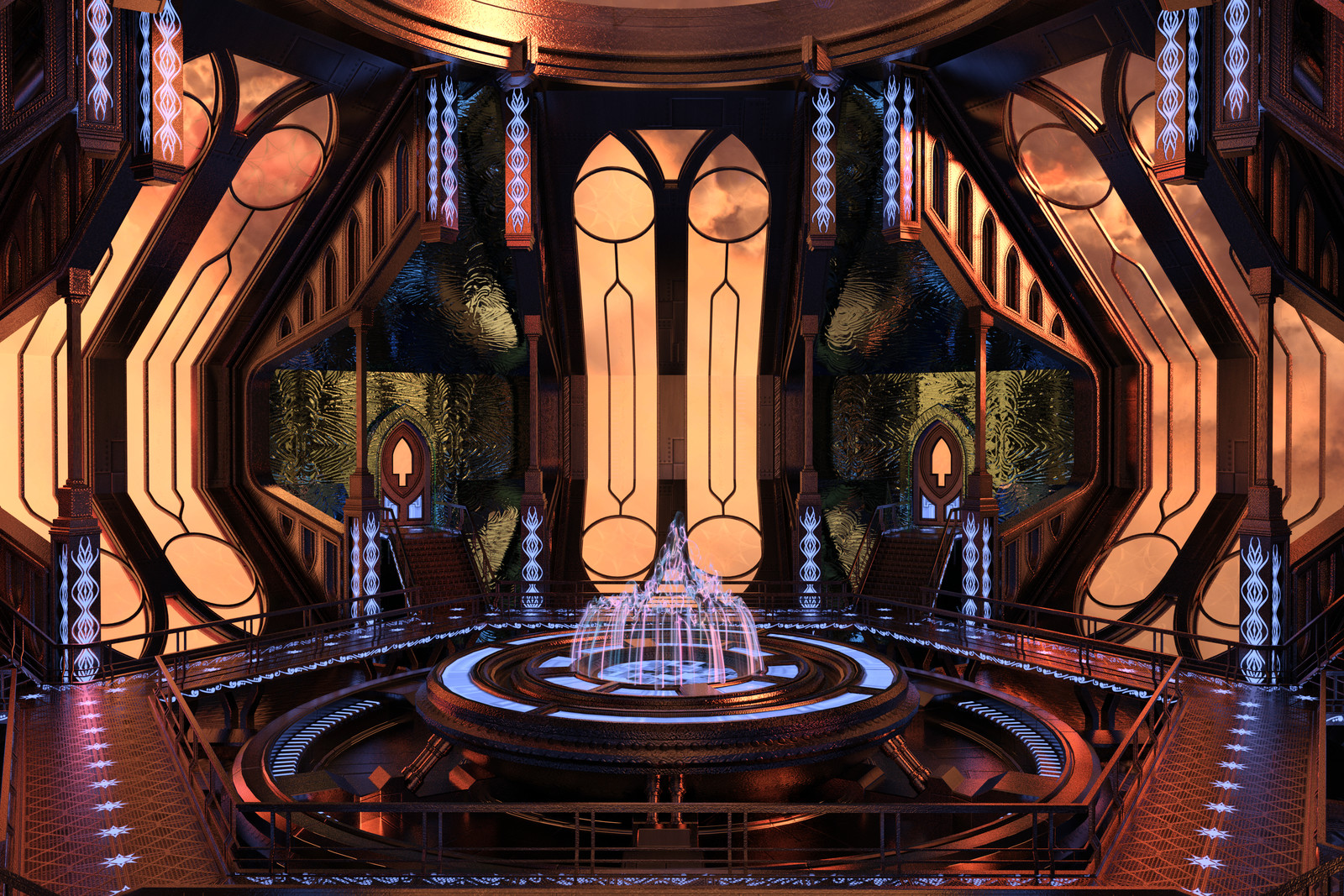 "The stars died so that you could be here today." —Lawrence M. Krauss -- RecklessPrudence

Shayde found Ambassador Gunther on one of the uppermost balconies of the Elemeno, looking down at the bottom in a way she knew too well. There was a time when the word "Jump!" was a cruel joke, and a time when it would be taken as a serious suggestion. This was one of the latter cases.

Much though she'd love to see all the Greater Deregulations and their accumulated isms go take a long walk... She leaned on the railing beside him and said, "Don't do it."

"How do you know what I'm thinking of doing?" he snarled. He, too, would much prefer Shayde to take a hike. Preferably into uncharted territory, never to return. To say that he and she would never get along is an understatement comparable to stating that the Big Bang was an impressive firework.

"I know that look. Been there, done that, spent a lot o' time in therapy, ye ken. I get that yer hurtin. Someone up an' turned yer whole world upside down an' now ye've got tae break it to your glorious leader that he's doin' it all wrong. That sort of wrath... easy to avoid on a short trip tae th' ground floor, aye?"

She could see it in his eyes. He knew she'd been there. "Greater Deregulation North Rising is... the greatest civilisation in the known universe," he said, without much conviction. As if trying to convince himself of a blatant lie. Which it was. "Our economy is... the basis for all other currencies. We... are... too big... to fail." His tears said otherwise. He knew that Greater Deregulation North Rising was a filthy backwater with an economy that was both fuelled by shakeable optimism and circling the drain. "We cannot bow to our enemies who would make us weak."

Towing the party line could only go so far if that path was downhill. "CRC finally showed ye enough evidence that weakness is strength, yeah?"

He looked around. Nobody else was up on this level, where strange cultural stores eked out an existence between hare-brained fashion stores and the occasional crafted items shop with borrowed tables instead of shelving. Gunther took a deep breath and whispered, "Yes."

"And now ye have to tell a leader with a hair-trigger temper and a love of unnecessary cruelty."

Another scan around. Gunther needn't have bothered. This balcony was already an oasis of solitude, and the nearest open shop was five facades away in either direction. Probably why he picked it to jump off of in the first place. "Yes," he breathed.

"It's all in how ye sell it," said Shayde. "You're one's all about freedom and profit, aye?"

"Yes." Gunther's eyes said, When he's not all about torturing anyone who disagrees with him. "My position depends on my ability to convince, coerce, and connive the immovable object into a place where it's more... tolerable. The steps we've attempted... aren't enough. And if I push too hard..." He started making scissor motions on his fingers.

Shayde could see why a short, sharp drop would be preferable. "What's the big hurdle?"

"Freeing the females from the breeding farms."

Yep. There was one of the very many reasons why most of the known universe despised the Greater Deregulations. The stars died so that you could be here, today. Is it a waste, or can I salvage it? Shayde bit down on her real opinion and tried to think. "They only gestate there, aye?"

"Well. I'm sure there's some light work that they can free the men from doin'. Sommat they can do as they gestate. They got hands. They can free the male workforce fer more important work in-between conceptions, right? And since they're workin', they're going tae need transport, and ye cannae have the state providin' hand-outs, so it makes sense t' pay 'em enough to eat and travel. And pay th' rent on their wee bed-sit housin'."

He stared at her as if she'd just grown another head. "That would... that would generate a phenomenal amount of revenue."

"As long as they're safe luxuries," added Gunther. "I'm certain there's something they could approve. We care about the safety and welfare of our females."

Shayde thought, Aye, that's why you've locked them up like prisoners and forced them to be brood mares from the day they get their first period. "Of course you do," she lied. "That's why givin' them a wee bit o' choice would be so good for them."

Gunther was no longer looking at the bottom. "Ambassador Shayde, you have possibly the most scheming mind I've ever seen working. If you were a man, you could buy our empire."

Four planets almost sucked dry of everything including joy. No thanks. "If I were a man, I would'nae be able to give you those angles," she said. "I lived a lifetime o' fightin' fer mine against those who'd rather stop me, ye ken. A man wouldn't have to do that." And that's all the warning you're going to get.

Gunther missed it, of course, and made a civil farewell before he stepped away from the edge. He respected her, at least. They'd never get along, but a little respect never hurt anyone.

Shayde vowed to keep an eye on Greater Deregulation North Rising. They were about to get some interesting times... if she had anything to say about it.

Tear them down from the inside. Love your work Shayde XD