Why should you consider buying Expanse EXP? - THE EXPANSE VALUE PROPOSITION

Disclaimer: This is personal opinion, but as I am a co-founder of the original surviving Ethereum fork, Expanse, and the founder of a cryptocurrency club with tens of thousands of people, I have a great deal of personal direct experience and insight into Ethereum and the overall crypto ecosystem.

VALUE IS NETWORK EFFECT AND TRUST

The Expanse team has been traveling to Blockchain and Tech Conferences for some time now building up the network effect of Expanse, adding more users and interest, and gaining trust. Starting with the DC Blockchain Summit, then as an Alpha Startup at the Collision Tech Conference in New Orleans. Then to Consensus and the Token Summit in New York City, and most recently the Moneyconf 2017 in Madrid Spain. Most all the questions asked of us come back to one central point, what is the value proposition of Expanse, and why not just buy Ethereum, as that is all you need since it has been rising and has the greatest Network Effect?

The same argument could have been made in the past for Bitcoin, why buy Ethereum when all you need is Bitcoin? The answer to that question will vary person to person, and if you are into this for purely ideological reasons Bitcoin is the most immutable decentralized Blockchain out there, anyone claiming their Alt project is as immutable as Bitcoin is being dishonest, and you just have to look at the Github and see that most are centrally controlled with little community input. They have leaders and they decide without a vote in almost all cases. Everyone that understands the technology knows this to be true.

Bitcoin, in fact, is so immutable and decentralized that many of the leading personalities in the field misrepresent Bitcoin solutions just to buy more time, either that or they literally do not understand Bitcoin. The reality is that if you want to invest or risk your wealth in cryptocurrencies or tokens, you can choose only Bitcoin or only Ethereum, you can choose both, or you can diversify into several different options and split the risk. You can try to time the market and day trade, you can hold the best options and wait. In the end, there are pros and cons to every single project and going all in is a risky choice that few experts would advise.

Therefore, if you do decide to not just be a maximalist and hope for the best, and you are interested in finding the next Bitcoin, or next Ethereum, while perhaps holding Bitcoin and Ethereum at the same time, Expanse is one of the best options out there to consider adding to your portfolio. As I see it, it is not about Ethereum vs Expanse, but rather, Ethereum and Expanse. That said, here are some important reasons to consider Expanse, and if you want to be a wise investor, gambler, trader, or however you like to define yourself, knowing the fundamentals is a great place to start.

Expanse is coming to the Ledger Hardware Wallet and many more Developments to be announced soon.

We are not Maximalists and we also believe in Ethereum, Ethereum developers like Gavin Wood have worked on Expanse creating Parity for us, Christopher Franko has shared EIP (Ethereum Improvement Proposal) concepts on the Ethereum Github.

We have a team composed of many skilled developers, and not just marketers and promoters like myself. So we can actually build everything we talk about in our road maps over time.

Expanse has unique dApps focused on real world use and creating a network effect that will grow trust, value, and use over time.

Borderless Corporation allows for business in the real world. Many other projects have anonymous developers and are not suitable to actual business partnerships and cannot move past the speculative phase.

We also have partnerships with important blockchain related companies, such as Jaxx, Gameboard, HC.Blockchain, Centurylink, Microsoft Azure, Bizspark+, Changelly, Chankura, and Coinomi, with more to be announced.

The Expanse Bonds System (EBS) is the first simulated staking smart contract system, granting rewards for holding Expanse (EXP) – like a time-locked savings account – That you do not even have to leave a computer running to gain rewards from. This is more secure than traditional staking or masternodes and much easier to use, tokens are locked in your private keys, no 3rd party control. The first of the kind.

The Gander block explorer system is one of the most robust in all of the Blockchain, and an innovative Tokenlab and DAO rating system is coming to Gander, along with a new website explaining all of this, along with EBS integration.

Smart contracts cost around 1/50th as much to run as Ethereum, making Expanse practical to use as a dApp platform. We are also working on dual chain solutions so businesses can use both Expanse and Ethereum for different applications. Saving costs when needed, and using the network effect of Ethereum when desired.

The team is friendly, available, and accessible. You can talk directly to the lead developers of Expanse on the Expanse Slack. We are not isolated from the community, rather, we are part of the community and working with them building Expanse together.

The project had no ICO, it had a fair launch and a fair test launch, and uses proof of work consensus. The team has worked hard almost non-stop since the launch of Ethereum itself, building up the value by improving and expanding the stable platform of Expanse.

No smart contracts of Expanse have ever been hacked and funds have been secured since the start of the project. No outside funding, no outside influence.

Using Votelock Tech and the upcoming Expanse DAO, the community will directly vote and participate with genuine user based consensus for any important changes or updates to the Expanse Blockchain and project.

This is not a clone of Ethereum, this is a unique public blockchain with different choices from the Ethereum team. A monetary policy will also be voted on by the community in the future using Votelock, rather than just implementing some choice without consensus.

Below is an updated comparison chart, and again, this about Expanse and Ethereum, I hold Ethereum personally, while I love the ideology of Bitcoin I can also see what project is most likely to become the top cryptocurrency in the long run, and that is Ethereum.

Expanse, the original surviving public Ethereum blockchain, is a project with a dedicated non-anonymous team, some of the earliest blockchain devs, great marketers, and is also by far the lowest priced Ethereum Chain. If you are looking for an alternative Ethereum public blockchain with the potential to grow, in my view, nothing else is close to the future growth potential of Expanse. 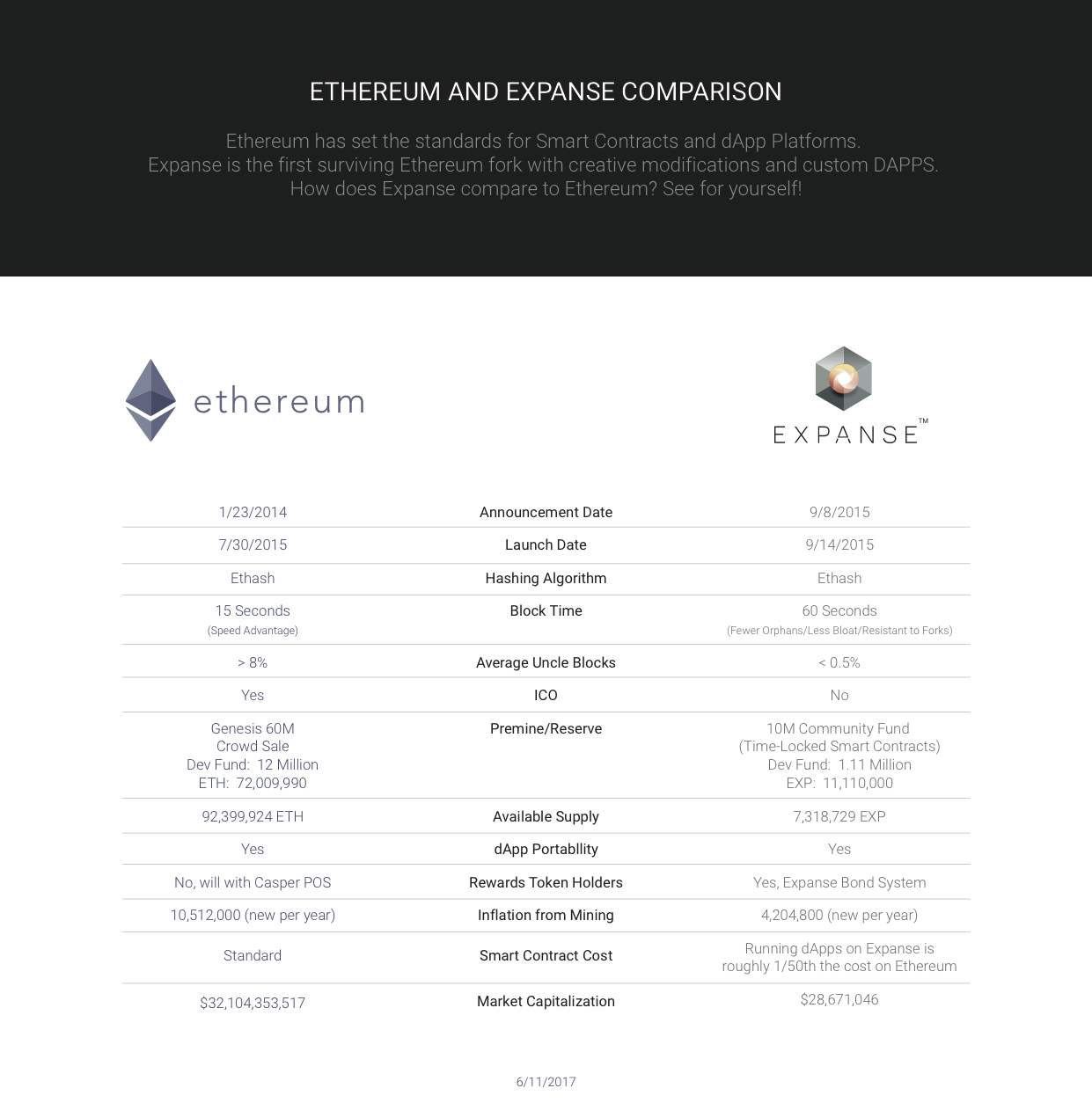 Great article. I will add some Expanse t o my portfolio now :)

Keep doing what you're doing! I've been a big fan of Expanse for a while now. It's my biggest holding other than Steem. I also really love the Bond dApp.

This is a really informative post about a still-undervalued token (in my opinion). I'm going to resteem it to spread the word!

Great post, and a great project. I like that the prject is very community driven, something that many other projects lack. Constant updates through newsletters and accessible devs create a high level of trust. I've got my Bonds are they are paying out nicely every month. Looking forward to the future. Resteemed!

The cost advantage is a real value proposition. The potential is endless !!

Was this post about Expanse a decent one? Well, I just upvoted it AND I am prepping to make my first Expanse purchase. I got in a little late and I am finally catching up in a self-imposed blockchain history lesson.

Right now is a great time to get in. All of the alts, including Expanse took a prive dive this month. If I had the funds, I would buy up a ton right now!

Great write up. Thanks for the info.