As you have noticed ICOs often work together or advise each other. This way after spotting one good ICO and team you can follow projects that they enter and expect similar success.

So the finished ICO is Kyber Network, which promises to make decentralized exchange. During presale they got 48,000,000 USD worth of investment. Binance drives the volume (if you are not there, register now!) but also good to see other places with good volumes.

Their CEO - Loi Luu is in advisors board of another promising ICO, Munchee - decentralized food review network. 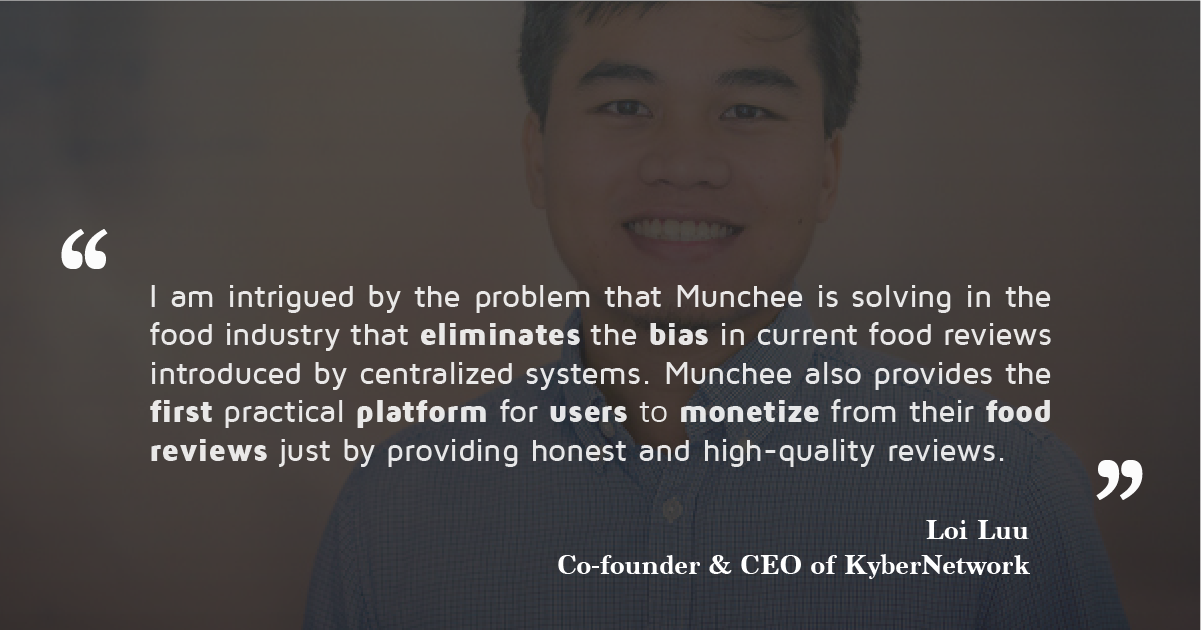 Munchee is a food review app with a growing user base in the U.S. Think of Munchee as an app for foodies that is a combo of Instagram and Yelp. The Munchee app was voted #1 most favorited app of the day on Product Hunt in June of 2017. Their Instagram account has 3,500 followers and Facebook has 16,000 followers. Munchee was founded in Silicon Valley by a team of Ex-Googlers, PhDs and U.S. Patent holders, and aims to eliminate bias in reviews, prevent review manipulation, reduce outrageous transaction fees charged by centralized payment networks (Visa, Mastercard), and to reward users with the MUN tokens for their participation in the community. Munchee will be the world's first decentralized blockchain-based food review incentivized platform.

Blockchain technology is introduced to fight review manipulation. The MUN token will be available to provide incentives for users to participate in a decentralized review ecosystem designed to give real reviews a fair shake. Centralized reviews can be manipulated.

The blockchain removes middle-men; it gives everyone participating an electronic ledger that assures them that data isn’t being fudged.

The platform will generate a unique economy by rewarding users with MUN tokens for quality content creation and active participation; and also incentivize restaurants to offer rewards and promotions to Muchee users.

MUN tokens can be used by users to redeem food and services (including delivery) from restaurants within the app or are fully transferable and can be sold on an exchange. Restaurants can also use MUN tokens to pay Munchee for advertising and promotion in the platform.

The result will be a strong, decentralized, economy built around a community of food lovers within the Munchee app.

Munchee’s stellar advisors include Nick Ayton, a member of the Top 21 Blockchain Influencers, Loi Luu of KyberNetwork, and Addison Huegel, a former communications head at the Ethereum Foundation, and Min Kim, the Chief of Staff of Civic.

Munchee will have its token pre-sale on Oct 31, 6 pm UTC, 2017 where you will be able to grab 15% bonus if you register for it before the date.The first 25% of total token allocation will be for the pre-sale. .

After launch company plans to buy out tokens from market from what they earn from advertisers and then burn the coins, so supply gets smaller and future price of they raises.

Hey dear @kingscrown interesting post
What is the legal status of the corporate entity behind the ICO?

i have no idea :) you need to do research before investing (as always)!

I remember doing Bong Hits with my friends back in the 80's and we use to go to Jack in the Box and order way to much food because we had the Munchees.

I love the idea!
It's something I've always thought about.
People always take pictures of their dishes, what they prepare at home, their culinary works.
Not taking advantage of that is a crime.
Great post and great idea for Loi Luu!

It reminds me to Steem but with food.

I'm getting the Munchees just reading this

I am really so happy after reading this. Plz @kingscrown help me for do something?

Sound promising. Thank you for this info.

Knowing many restaurant owners and there constant pricing pain points, this project is going to be a leader in bringing quality competition back to the grid. This is going in my Toolbox...

Well that is a great news of a new IC working in field of food market . It's showing that future of blockchain r really great and have still untapped potential.
Sir can you plz give suggestions to me that how I can improve my blog. Plz sir do a visit over my blog.

This help me in making decisions on icoto buy in. Your analysis is logical and full of facts. Thanks

This wonderful post has received a bellyrub 0.49 % upvote from @bellyrub thanks to this cool cat: @kingscrown. My pops @zeartul is one of your top steemit witness, if you like my bellyrubs please go vote for him, if you love what he is doing vote for this comment as well.

This post has received a 1.32 % upvote from @buildawhale thanks to: @kingscrown. Send at least 1 SBD to @buildawhale with a post link in the memo field for a portion of the next vote.

Awesome post! I just downloaded the app and created an account as my friends and I go out every Friday to a new restaurant somewhere in Boston.

I just wanted to let you know that your posts have gotten me more interested in cryptocurrencies, and I am currently trying to learn as much as I can about them. Thank you!

Congratulations @kingscrown, this post is the forth most rewarded post (based on pending payouts) in the last 12 hours written by a Hero account holder (accounts that hold between 10 and 100 Mega Vests). The total number of posts by Hero account holders during this period was 249 and the total pending payments to posts in this category was $3626.88. To see the full list of highest paid posts across all accounts categories, click here.

Okay this is brilliant, I'm often trying to think of what other things decentralization can help.

This is one of them, yelp has had some questionable hints at corruption. Some might say they almost shake down businesses for reviews.

I'm thinking there is still a potential of this if businesses just go directly to whales (or what equivalent would be on this platform) and bribe them.

Any idea if that's possible or what's in place to prevent such on Munchee?

hank you for your information.
I found really awesome room and This is no ordinary pumping room.
I have made at first $50,$1,000 and invested more and made $4,000.
All this happened in one month. You'll see at
http://telegram.me/DvaPump

This post has received a 1.08 % upvote from @booster thanks to: @kingscrown.