CryptoKitties Moving to Other Chains ?

I did not make post about CryptoKitties despite i have been playing iwth them since some days so if you dont know what is it i will give short explanation.

Its a game where you buy and breed Kittens on ETH chain. Due to this game whole Ethreum blockchain is bloated, transactions and tokens are stuck and such.

So the HYPE got so big that other chains started speaking if they could get the game there and get all the users.

We had our Steemit post on the case too and im sure Graphene based chain (STEEM/BTS/EOS) would rock with it - if its possible to make the game on it at this point.

NEO the chinese Ethereum seems to start working on their game

LTCs Coblee did just one tweet yet people expect the Chikun game to come from it. ENJ wrote how they wanna solve Kitties problems on their chain While you can think buying Kitties is stupid be aware that gamers alreayd buy items/weapons or even outfits with real, and often big money. This is just a move to blockchain and can be future of it. Collectable items that cannot be counterfeid.

It is so exciting. It should also come to steem Blockchain.

I love kitties, but I also need my ethereum!

@munawar1235, For taking this step steemit will broad their capacity, then it's focus the worlds,,, @kingscrown

interesting idea. Many business find a home into blockchain...

Doggy, cow, camel? What is next?

Yep need to be on steem chain :) 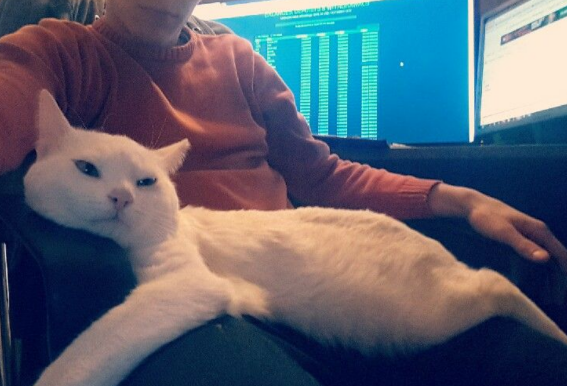 i'm playing it, and with this eth sucks, i'm paying like 6$ every time i move inside the game!

CryptoKitties create new inspiration to build games on blockchain, we should see alot of new games in the upcoming months
Thanks for sharing the info

It would be rather upsetting if crypto was brought down by a simple game about kittens!!

But @kingscrown ENJ coin is an ERC-20 token too based on ethereum blockchain. Wouldn't it be the same? I would suggest they use STEEM though. Proven best transaction volume out there.

A friend of mine earlier today who has absolutely zero idea of how cryptocoins or blockchain tech works at all was telling me about CryptoKitties and how fascinating it seemed as a concept. I'd have to actually agree. It seems like a super ingenious and fun way to get average people moving towards crypto. If the community keeps up with ideas like this that appeal to the masses and make regular people feel safe and more welcome we all benefit! That's half the reason I joined Steemit in the first place. It seemed like a fun and logical step in the progression of social media platforms.

As soon as gaming becomes big and popular in blockchains, we will have another huge bull run

SONM and other similar chains will run the games I think....SONM is having a poll now on which game they will run first ;-)

I have 12 kitties and wrote about it earlier. I think this thing is great. Transaction fees are too high right now but it will calm down. I also wrote how you can gift kitties for Christmas. I just started following you @kingscrown. Great stuff and can't wait to see what games and collectibles are next. I consider these kitties the bitcoin of Blockchain collectables. People laugh now but in ten years, they will say the same thing as what they say now about bitcoin. " I wish I bought $100 of it ten years ago. I would be a millionaire today." I say get out and do it, just not with Bitcoin, that ship has sailed. o it is a good infrom and best ida

While you can think buying Kitties is stupid be aware that gamers alreayd buy items/weapons or even outfits with real, and often big money. This is just a move to blockchain and can be future of it. Collectable items that cannot be counterfeid.

Point taken but it still sounds extremely stupid to me. Maybe it's my old aga showing but it is a foolish waste of money in my humble opinion. Thanks for enlightening me though. It's a crazy world we live in.

Wow, be careful where you spam I suppose; my downvote cut your rep in half.

Please note that Steemit is an open platform; anybody can look at your comments page, https://steemit.com/@college-is-dumb/comments and see that every comment you have written is spam.

Steemit isn't the place to spam others; if you want to be in advertising, spend your time (and money) elsewhere.

Let me know that you understand this in a reply to this comment, and change your behavior to not spam (note that anyone can always verify at the above link!), and I will remove my downvote.

Also note that votes cannot be changed after 7 days, so you have a week to let me know, otherwise it's permanent.

For such amazing rewards on minimal few days late content, spell check would be a nice gesture to show you're putting appropriate effort. 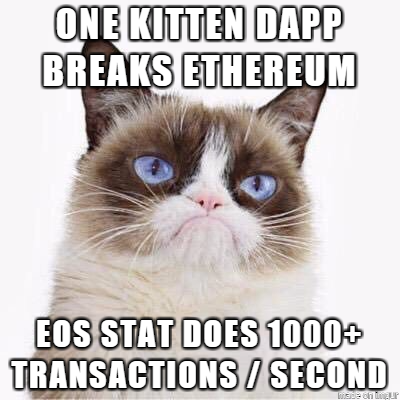 Raiden does it too and it getting ready fro main net. Eos is not released yet

Testnet is out. Your on steemit pal. Also from bitshares. And dan larimer. Do some research first my goodness kids nowadays.

Show us a DAPP on EOS with as many users and I'll sell all my Ethereum right now :)

The first movers in any space are never going to be the best. People didn't drive the old Ford Model Ts for a while, but that didn't mean Ford went out of business. I'm glad there is competition in this space but it's far too early to count out the ETH dev team.

Thanks for sharing .i want to more about blockchain.

Seems everyone is keen to jump onto the crypto kitties bandwagon these days. The original made bank but there's no guarantee that a knockoff will too.

I would welcome the new cat overloads in. I'm sure Steemit would make a wonderful home for them.

While I've not tried this "game" yet. I sure have played a few RCE games in the past. I've always been shocked by the lack of them in the cryptocurrency world.

I still don't get it. Do you sell the cats you breed? How are values "assigned" to the cats or rarity determined?

the HYPE got so big

The article is wonderful. please help me in this steemit social network I thank you if drop by and upvoted my post @a-jimynguyen Dear.

Never expected this to hype. The kitties are really adorable! Meow!

This was a test for Etherium and it failed.

Yea , it would be cool to have it on Steemit . This Etherium is so awful. For example, just now I purchased kitty, transaction is successful, money paid, but I have no kitty :(

I wanted a kitten but I could not get it, a friend is playing it and he says it's sad how the game is dying because of the block chain, he also says that people are giving away the cats, they even give them cheaper than it is worth creating them, no more because they want to leave the game.

I am follow you, if you can plix help me in my blog

i got into crypto kitties myself but also important to note that they are clogging the ethereum network , luckily ethereum team has a solution read here .
https://steemit.com/ethereum/@ajkapss/microraiden-payment-channels-are-now-live-on-ethereum-main-network#@newguyintown/re-ajkapss-microraiden-payment-channels-are-now-live-on-ethereum-main-network-20171206t065921986z

Whether people lost a lot of valuable kittunz isn't the most interesting thing. I think that it's worth noting how valuable lesson the ETH developers just got. Stress testing the network has surely brought them a lot of insights in where to go forward for more scalability.

Congratulations @kingscrown, this post is the sixth most rewarded post (based on pending payouts) in the last 12 hours written by a Hero account holder (accounts that hold between 10 and 100 Mega Vests). The total number of posts by Hero account holders during this period was 317 and the total pending payments to posts in this category was $5296.29. To see the full list of highest paid posts across all accounts categories, click here.

Awesome post, I love the idea of items being impossible to duplicate, already purchased some pepecash for that reason :D card games will take off in the future I think if done right.

It was only a matter of time where they move out of using Ethers just like other businesses away from Bitcoin. It takes too long, cost too much, and ineffective. Litecoin is a great alternative beisdes Bitcoin Cash for now.

Maybe CryptoKitties will switch to the Steеm chain and give the airtime an opportunity to work :)

This is not a good look for Ethereum, at least it exposes where the technology's currently at.

This cryptokitties stuff might look stupid but it is a really big deal for crypto, the more things like this come in, the faster we will get massive adoption... Would be great to have something like this on steem of course...

When did this kitties game get so big? I never heard oh it until today and now I've seen it at leas a half a dozen times!

I wrote about this a couple days ago. I'm telling y'all cryptokitten is something

https://www.tokenpay.com?rc=0OOAF best ico of the world never miss this be the part of Tokenpay first join now Get 100 % Profit

The success of cryptokitties will give rise to many more games and probably platforms such as NEO will be the one to gain from this. EIther way this is actually good for Blockchain the long run and will move the technology being adopted by more than geeks and cryptocurrency users..

So what next Crypto puppies or crypto bunnies? :)