An Accountant's Attempt at Mining Crypto - My First Post

As the title indicates, I'm an accountant. Well, not yet technically, since I don’t graduate until next week and won’t start working until the fall. But close enough.

About a month ago I decided to get into mining cryptocurrency, specifically ethereum. Me and ETH go way back to 2015, where I first read about it in the WSJ. I’m not that technically skilled with computers but the idea of smart contracts seemed interesting to me. Long story short I bought some ETH, only to then lose interest as I decided to spend more time getting drunk at frat parties.

Anyways, flash forward to March 2017 and I hear that ETH is booming. The price rise seemed a little premature and I wasn’t quite confident enough to invest a lot of cash into it. I decided to build a rig in order to limit my downside, as the hardware still has some resale value. Little did I know my investment would’ve doubled in a month had I just bought ETH.
I knew I was pretty late to the mining game but I figured, screw it, why not? I don’t know much about computer hardware so I had to do a little research but found a lot a of great guides online. I shelled out $2500 for my first 6gpu rig, “Rogue One” I call it. 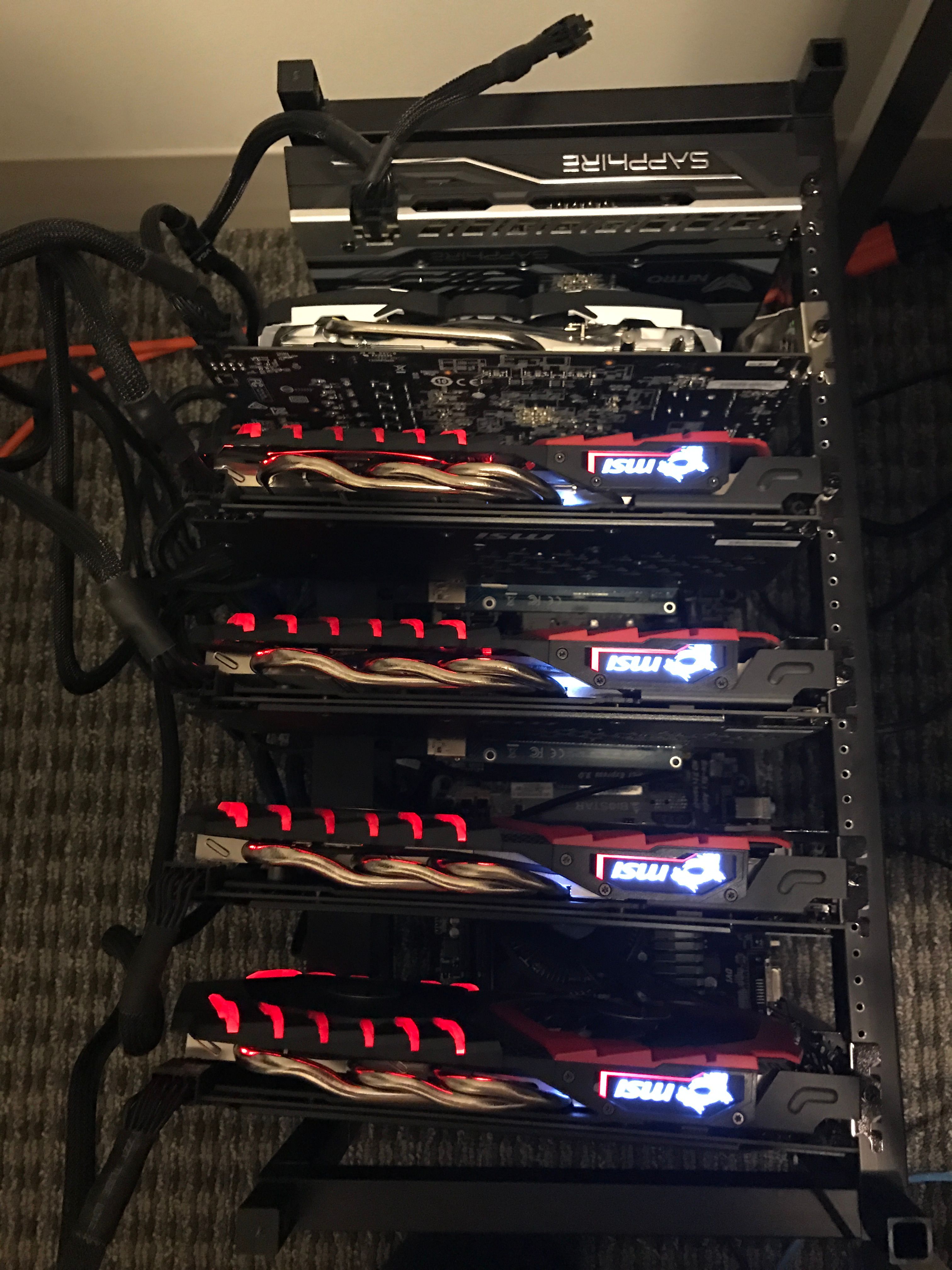 Simply put, Rogue One was a bitch to put together. She kept wanting to do her own thing, and wouldn’t do what the council (tutorials) said she should do. She was the Rebellion that I couldn’t crush. (Sorry I couldn't resist lol)

It took me awhile to assemble Rogue One, but I finally got her to boot and installed windows. God I never imagined a day would come where I would enjoy hearing that stupid windows boot audio, but that day was the day. I then proceeded to attach the gpus and just as things were looking good, everything went black.

I didn’t know what the issue was so I looked up how to troubleshoot the motherboard. Apparently, you need a special speaker and being the impatient asshole that I am, I drove furiously to the nearest Microcenter and picked one up. I also grabbed an extra set of RAM because some website said that might be the problem. Before I could escape, an employee came over and asked me about my build specs. I looked at him blankly, not even knowing what specs I had. We stood there awkwardly for a second, until he finally said something about a new processor. I acted like I knew what he was talking about, but I had no f*cking clue.

When I returned to my apartment I replaced the RAM and hooked up the speaker. Beep…Beep…Beep. All systems were primed and ready. Next I configured all the mining software and setup my wallet. Now I was ready to mine, or so I thought. I read about boosting your hashrate by modding the bios, and at first took a little while to figure out what that even meant. After hours of scouring mining forms, I finally figured out exactly what I needed to do to mod the bios on my 480s. All I did was basically copy over the timings. Flashing the bios went pretty smoothly, with the exception of the Sapphire so I just left it at stock. Then I used afterburner to tweak the rest. I was getting a little over 175 MH/s but decided to dual mine ETH + PASC which left me at 162 MH/s and 2400 H/s respectively. I didn’t mind the extra wattage pull because I’m not paying for power right now, but the temps were running a little high. I decided to buy a few fans and a portable AC unit to keep things nice and cool.

Stay tuned for my adventure with Rig 2 in my next post. Let’s just say it was lit, literally.

It's good to see someone taking this leap. It's never too late to jump into mining if you are willing to do the research and learn. There are lots of good websites that can help you calculate the most profitable coin to mine as well if you are not strictly limiting yourself to ETH mining. Nicehash has a sort of all in one miner that sells your power for bitcoin as well, might be a nice alternative and require less research on your part. Keep steeming!

Here is the best link https://whattomine.com/

Your rig has crashed!!! Get it back upppp!

I know.. One of my fans stopped so I fixed that . But then I decided to tinker with the sapphire bios, which I'm regretting. I bricked it and also apparently now there are issues with the AMD drivers that are preventing me from even running the mining client. Once I fix this I'm never touching it again lol

Are you modifying your bios? If so there is a patcher.

I've modded them before, with the exception of the sapphire. I definintely gave it a bad flash, been trying to flash it back but am having issues at boot with Atiflash. Just gonna run 5 on that one for now, and hook the sapphire up to my desktop until I flash it back

Sounds rough, I think there are more complicated ways to reflash bios that you may want to explore... I'm not sure what that card was mining at but I can give you a rom that mines at 30.X and some DCR for a non-nitro 4gb (I feel like there is a decent chance it would work on 8gb).

This is great, I've been looking into this myself and it's good to see an honest review of the beginning of this. I look forward to seeing more about this soon!

Amazing. I am also an accountant and find myself fascinated with the potential of Cryptocurrencies and the affect they can have on the world. Keep up the good work and good luck.

Haha, I can totally relate to your Mining Rig story. It actually isn't that hard, but when it's your first rig, things just don't go as smoothly and well as one might wish for.
I just finished building my first rig, too, will be posting about it soon.

Anyway, welcome to Steemit, hope you'll enjoy the experience here.
The advice I like to give: Expect nothing, get suprised from time to time.
Congratz on your accountant graduate. My girlfriend studies it, so I know it's some crazy shit. : D

thanks for the advice!

I've literally just started even researching mining within the last week. But i was hesitant because i thought that i might've missed the wave.. This was motivating though, thanks 👌

I really liked your first post, @frostedace! Upvoted & Followed you as well!

welcome to steemit @frostedace. so glad having your personality in this platform, looking forward to more of your posts.

Good luck with your next rig. The more I read about this things, the more I want to start doing that myself.