Since the EOS community launched the EOSIO block producer campaign, according to the “Block Producer Candidate Report #7 - April 18, 2018”, a total of 71 candidates have been listed in the total active BPCs. Many more candidates are still on the road to participating in the game. Up to now, it has been heated discussions in the community as to whether BP node proponents can obtain benefits from block rewards obtained from BP nodes. According to Thomas Cox's proposal in "Article IV - v0.3.0 Draft EOS.IO Constitution - No Buying or Selling of Votes", that "No Member shall accept anything of value in exchange for a vote of any type, including Block Producer candidates or “Employees of the Proposals. Penalties for violation may include, but are not limited to, fines, account freezing, and reversal of transactions.” are considered to emphasize that “Votes represent a public good” of EOS and explicitly prohibit the election of bribery in the level of EOS.IO constitution.
However, such regulations only set a bottom line. In fact, there are still two major points need to be discussed about the use of EOS BP block rewards. On the one hand, the annual inflation token of the EOS network (also the BP node's out-of-the-money award) is a worthy digital asset, then how to use it effectively, fairly and transparently becomes a very important issue. There seems to be some rationality in rewarding the proponents of the BP node who actively vote for community governance. On the other hand, how to ensure that bribery elections are eliminated in the distribution of such benefits, so that the value of these systemic inflation tokens can actually feed back into the entire EOS ecosystem and promote the rapid and healthy development of the EOS whole community.
In response to this dilemma, OracleChain proposed the EOS BP revenue distribution plan based the EOS-BP-DAO mechanism. The plan advocates the use of EOS BP node rewards to support and incubate the start-up teams and projects of the EOS ecosystem. This program is mainly based on the following two principles: First, the foundation for the future development of EOS ecology is that more and better blockchain applications can be developed and landed based on EOS. So the EOS-BP-DAO mechanism is designed to use BP block rewards to cultivate these applications. Second, there should be a mechanism that motivates users who hold EOS Tokens can actively vote for participation in community governance, so the EOS-BP-DAO mechanism also retains incentives to reward BP's proponents. Finally, in EOS-BP-DAO mechanism, all such incubation and the distribution of possible interests must be formally implemented by open and transparent mode through strict democratic voting method, so as to avoid the exchange of interests and unjust gains.
The following is the EOS BP income distribution scheme with EOS-BP-DAO as the core part: 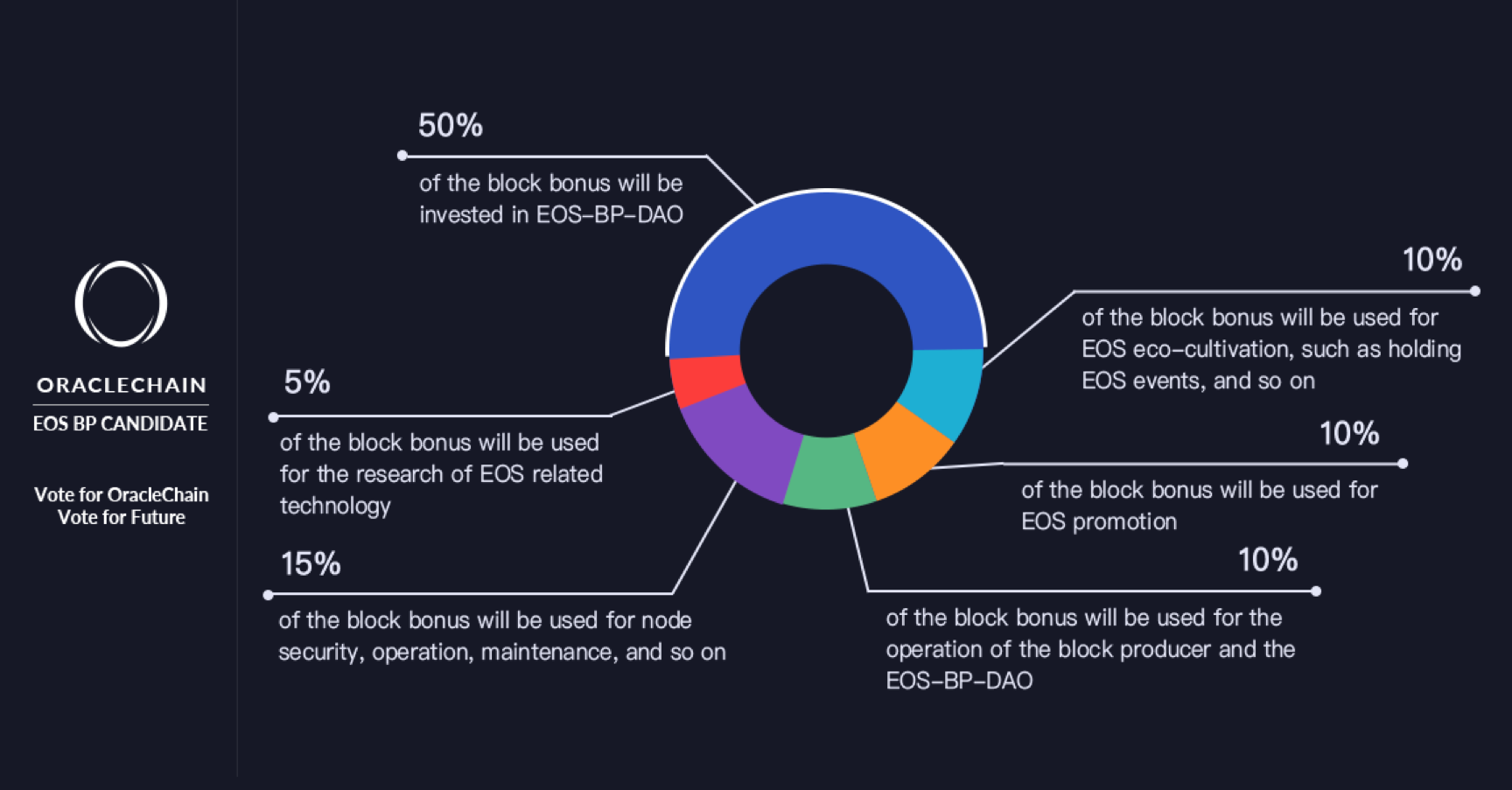 Each of these parts is described in detail as follows:

In summary, OracleChain is a BP candidate and also a specific builder of EOS development ecology. We are fully aware of the importance of a start-up fund for an EOS start-up project. Based on the understanding of EOS ecology, we have proposed such a BP block rewards distribution plan. We believe that through such an allocation scheme, the use of BP block rewards can be maximally monitored by the entire community. At the same time, this allocation scheme can also balance the interests of all parties in a fair and equitable manner, and it can ensure that nodes have sufficient human and financial resources to provide the hardware, software, and human resources required for the successful operation of the BP node and continue to develop themselves.
OracleChain also officially committed to the entire EOS community that if OracleChain's efforts are fortunate enough to be recognized by the community and can become an EOS BP node, then we will use the above-mentioned EOS-BP-DAO BP block rewards distribution scheme to distribute the BP block rewards in an open and transparent manner. We also hope that more BP candidates can understand and accept the EOS-BP-DAO BP block rewards distribution framework, which in turn will promote a more healthy and vigorous development of the EOS ecosystem and community.