We are OracleChain team. We are both the EOSIO block producer candidate and the builder of the EOS oracle service infrastructure. We believe that a candidate should be judged more based on what he/she currently does than what he/she claims to be doing.

As the world’s first application built on an EOS ecosphere, OracleChain needs to meet the demands of the Oracle (oracle machine) ecosystem by efficiently linking blockchain technology services with various real-life scenarios, thereby delving into this immense tens of billions of dollars valuation market. As a decentralized Oracle technology platform based on the EOS platform, the autonomous Proof-of-Reputation & Deposit mechanism is adopted and used as a fundamental service for other blockchain applications. In addition to Oracle services that provide real-world data to the blockchain, Oracle services that provide cross-chain data are also offered. Given that OracleChain can accomplish the functions of several prediction market applications, such as Augur and Gnosis, OracleChain can also support smart contract businesses that require high-frequency access to outside data in certain scenarios, such as Robo-Advisor. OracleChain will nurture and serve those blockchain applications that change the real world. Our mission is to “Link Data, Link World,” with the aim of becoming the infrastructure linking the real world with the blockchain world. By achieving intra-chain and extra-chain data connectivity, we aspire to create a service provisioning platform that can most efficiently gain access to extra-chain data in the future blockchain world.

This report is trying to answer the questions outlined by @eosgo in their BP candidates criteria post.

2.ID ON STEEMIT: Links to the following ID information, all posted to the Steem blockchain (either in one post or multiple):

3.TECH SPECS: Estimate of technical specifications and total expenditure for resources by June 3, 2018 - posted to Steem blockchain. Check mark given for any estimate, modesty encouraged by permanent Steem record. Quality and accuracy of effort will be judged by the EOS community.
Now OracleChain is the testnet block producer node, and we adopt the DigitalOcean cloud machine with the server approach like:
12core CPU(Intel Xeon ProcessorE5-2650 v4)/48GB DDR4/320G SSD
When the EOSIO mainnet is running， we will adopt the cloud machine with the follow basic configuration like：
（1 host, 1 standby）x1.32xlarge/64 core/1024GiB Meory/10TBSSD (We use the AWS cloud server as an example. Actually, other cloud host services or IDC servers may also be used.)
Of course, we will be prepared to make specific adjustments as needed, and the adjustment details will be based on the recommendations of Block.One and on the needs of the EOSIO mainnet. In the future, depending on the maturity of the IPFS technology, IPFS blockchain data storage solutions may also be adopted.

4.SCALING PLAN: Estimated scaling plan for hardware after June 3, 2018 - posted to Steem blockchain. Rough outlines receive a check mark, open review gauges the effort.
After June 3, 2018， we will adopt the cloud machine with the follow corresponded configuration with the actual payload, the typical scaling plan is(1 host, 1 standby)：
x1.32xlarge/128核/1952GiB Meory/50TBSSD (We use the AWS cloud server as an example. Actually, other cloud host services or IDC servers may also be used.)
We also prepared a physical machine（IDC）plan, which is just like(1 host, 1 standby):
4 * Intel Xeon ProcessorE7-4820 v4 2.00 GHz/10C/25M/115W processors；
8 * 12 DIMM memory board；
64 * 32GB/DDR4/ 2400MHz/ECC/REG/2RANK memory；
24* 3.5 SAS3.0/SATA3.0 Drive Backplane；
14 * Intel/SSD/DC/S4500 Series(3.8TB,2.5inch SATA 6Gb/s ,3D Nand,TLC)；
Support 4* X16+4* X8；
2+2 920W Redundant power supply；
2 * Standard gigabit network interfaces。
We are negotiating technical cooperation with cloud service providers. It is possible that we will adopt a more optimized solution than the above two solutions in the future.

5.COMMUNITY BENEFIT: Community benefit project outline, only for projects expected to be public by June 3, 2018 - posted to Steem blockchain.
Some of our specific contributions made to the EOS ecology include:
1). Now the OracleChain team has developed PocketEOS, an EOS wallet application that can actually run on the EOSIO test network. It plans to open source the wallet application code in May 2018 to support EOS ecological construction. At the same time, we also released the first Dapp name “有问币答(Ask your question with your token)” which is fully operational on EOS smart contracts. 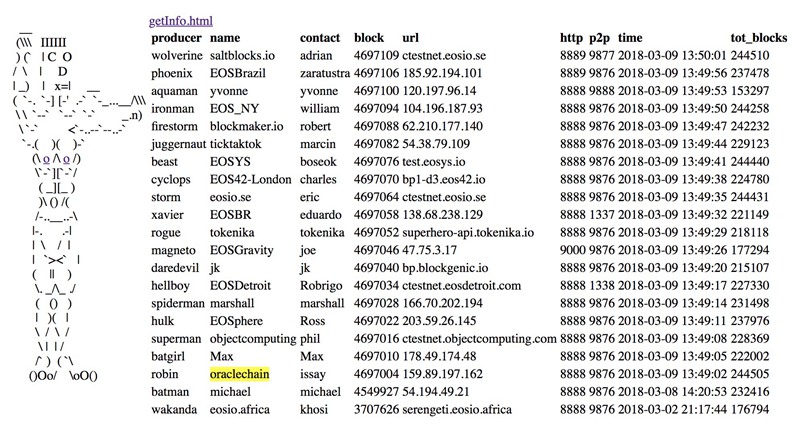 4). The OracleChain team has been propagating EOS in China to promote smart contract development and explore decentralized business models. A series of “Linking Dapp Times - Blockchain Technology Salon Offline Meetup Nationwide” activities have been held. The event was held in four cities in China, namely Beijing, Shanghai, Shenzhen and Chengdu. These activities invited the local EOS project development team in the event cities to actively participate in and promoted the popularization of EOS Ecology in China. 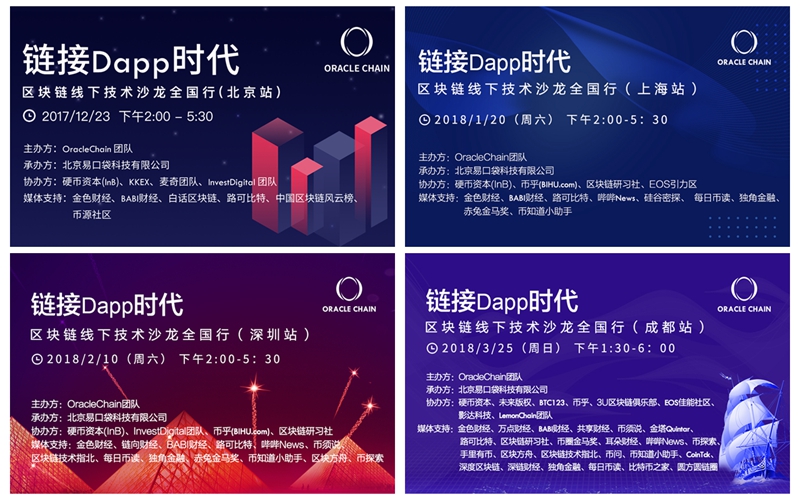 6). The OracleChain team will work with the freeCodeCamp Chinese community (link: https://www.freecodecamp.cn/) to cultivate and develop the EOS development community. The freeCodeCamp is the open source project on GitHub with the maximum stars (link:https://github.com/freeCodeCamp/), covering more than 160 countries, more than 2000 cities, and about 2 million developers (of which about 120,000 developers in China community). The OracleChain team will continue to deepen cooperation with the freeCodeCamp Chinese community and its operator BlockGeek in the future. With its existing developer community and organizational model, it will nurture and incubate more EOS developer communities globally. 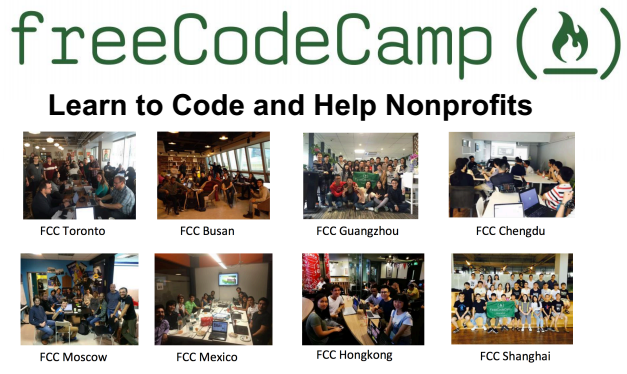 7). EOS developer training has always been an important element in the EOS developer's plan. In view of this, the OracleChain team will deepen cooperation with freeCodeCamp Chinese community and its operator BlockGeek and plans to conduct blockchain training in Beijing, Shenzhen, Shanghai, Suzhou, Chengdu, Hangzhou, etc., and follow-up. We will also develop online and gamified courses and train more EOS developer.

8). We established the OracleChain Lab to explore smart contract development and decentralized application business models, and to incubate third-party Dapp projects. At present, several Dapp projects that we hatch will be brought to market simultaneously when PocketEOS is officially launched.

9). The OracleChain team also organized a blockchain high-end technology salon and continued to export the core blockchain technology to China's blockchain projects and enterprises. The three themes that have been held so far are "Smart Contract Security https://oraclechain.io/files/salon-1.pdf " and "Cryptographic attacks in privacy protection https://oraclechain.io/files/salon-2.pdf " and "The most powerful tool in the blockchain - consensus". 10). The OracleChain team has a strong background in information and system security and is working hard to provide a security solution for the EOS ecosystem, especially the EOSIO block producer node.

We always think that when we look at a candidate who claims to do something in the future, we still need to look at what he has done. All of the above work that we described and already done will continue to be carried out by the OracleChain team. In the future，OracleChain will continue to actively participate in the EOS community's various tasks which includes improving and optimizing EOS development documentation, promoting the development of EOS wallet and browser, support for EOS start-up projects, organizing various types of event to propagate EOS projects, etc. And we will work with our partners to incubate more EOS developers, establish more local EOS technical communities in China. We hope to cooperate with global EOS developers and community participants to build EOS Ecosystem.

These are some mighty competences and specifications, both for your team expertize and node configuration. Thanks for publishing this.

I wish you all the best with your block producer candidacy!

Thank you，lemark. We’ll continue to do such kind of small effort for eos ecosystem.

Wow, what a candidates we have, wish you best luck guys, you will get my vote as soon as it is possible