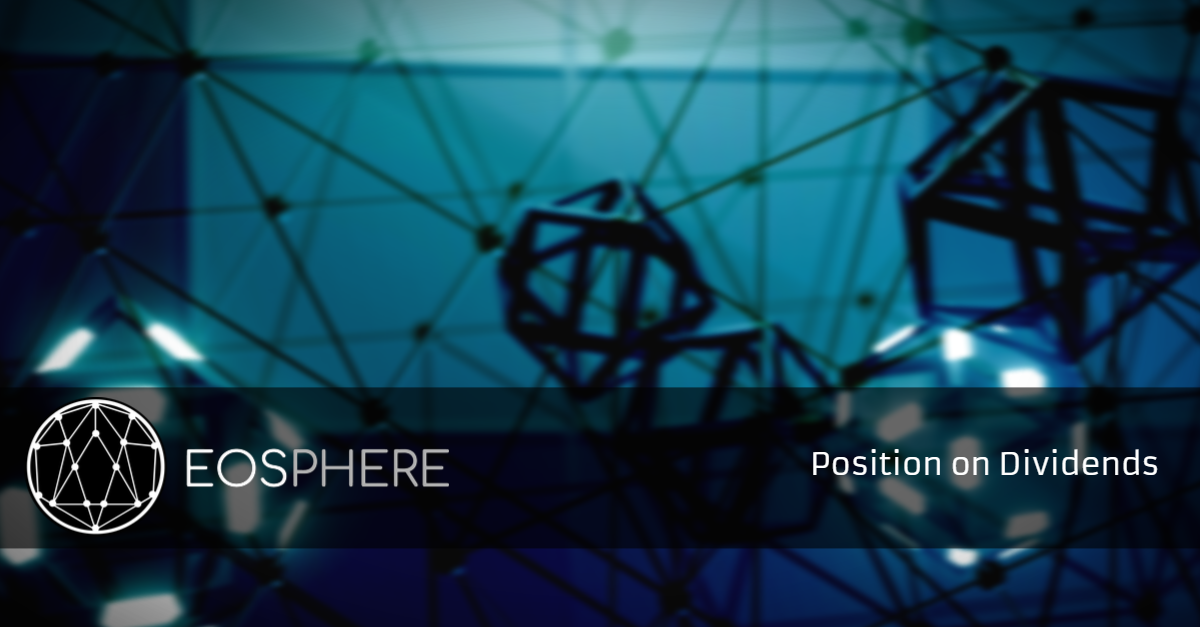 This article is in response to EOS Go’s question on EOSphere’s position on dividends specifically the sharing of Block Producer rewards with unaffiliated voters, aka “vote buying”.

This topic has been hotly debated by the community both for and against vote buying. Some of the arguments for this practice question the amount of token holder voter interaction without any clear incentive to actually vote, another is that Block Producer’s will receive a large amount of token rewards making them wealthy and extremely powerful in the ecosystem while the community will see little benefit.

EOSphere believes in creating a positive feedback loop where the rewards from Block Production will be reinvested to grow the EOS ecosystem.

Some of the ways that EOSphere have commited to reinvesting in EOS are:

It is our opinion that this positive feedback loop will be the right kind of incentive for token holders to vote for effective Block Producers that have the community’s best interests at heart.

A lesser known fact is that at this point Block Producers won't actually receive an inordinate amount of rewards,  a maximum of 1% of the total 5% EOS Blockchain inflation will be divided between 101 Block Producers based on their number of community votes, with the 21 active producers getting more of that 1% for actually producing the EOS blocks.

After you consider operational costs and community benefit initiatives, EOSphere doesn’t expect to be amassing any wealth with a large amount of EOS tokens at all.

Besides “vote buying” being against the proposed EOS constitution which EOSphere will absolutely adhere to, EOSphere are also fundamentally against the practice of paying dividends to token holders in exchange for their vote as we believe this will significantly negatively impact the growth of the EOS ecosystem.

It is our opinion that if Block Producers were in competition and differentiated themselves by who would provide the highest dividend to their voters this would ensure a race to the bottom (whoever provides the largest dividend) leaving little funding available for the appropriate Infrastructure, Governance and Services Management as well as Community, Initiatives and Ecosystem growth. This would mean that even poorly performing Block Producers could potentially still be elected purely because of their purchased votes.

EOS is a commercial scale Blockchain, aiming to support thousands of conconcurrent DApps with millions of end users. We cannot let down those entrepreneurs, startups and Blockchain based businesses that have invested in and committed to EOS because of the effect of vote buying.

EOSphere will be adhering to our statements in this blog and look forward to sharing all the details of what we are doing to add value and grow the EOS ecosystem.

EOSphere are a passionate group of EOS enthusiasts and data centre professionals campaigning for election as Founding Block Producers for the EOS mainnet launch in June this year.

Based in Australia, EOSphere are focussed on bootstrapping the EOS community and serving the entire EOSphere through provision of infrastructure, governance and community benefit initiatives.

Congratulations @eosphere! You have completed some achievement on Steemit and have been rewarded with new badge(s) :