Calling all EOS Token Holders - Get Ready for the eosDAC Snapshot A DAC is owned and controlled by it’s token holders, so eosDAC will be airdropping 75% of it’s tokens directly to the EOS token-holders worldwide. In this way eosDAC will be the Community-Owned EOS Block Producer.

The snap-shot of all EOS token holders will be taken on the 15th April at 01:00:00 UTC and the airdrop of eosDAC tokens at a rate of 1:1 will be made according to EOS token ownership at the point of this snapshot. The airdrop itself will follow in late April / early May.

How do you make sure you get your eosDAC Tokens?

If you have over 100 EOS tokens and you hold your EOS tokens in a wallet for which you control the private key (for example a hardware wallet, my etherwallet, metamask etc) then the GOOD NEWS is that you will automatically receive your EOS tokens, there is nothing further you need to do.

If you have less than 100 EOS tokens and you hold your EOS tokens in a wallet for which you control the private key, then sign-up to our newsletter and after the snap-shot we will inform you how you can collect your tokens.

What about if your EOS if on an exchange?

If you hold your EOS tokens on a crypto exchange then you will not automatically receive your free eosDAC tokens. Either you need to move your tokens out to a wallet for which you control the private key or you will need to write to your exchange to ask them to confirm that they will be distributing the eosDAC airdropped tokens.

At time of writing only Upbit (the second largest exchange in trading of EOS) has confirmed that they will be taking their own snapshot on the 15th April and distributing eosDAC tokens to their customers - https://steemit.com/eos/@eosdac/eosdac-april-airdrop-eos-holders-relieved-as-exchange-aligns-for-snapshot

It is most unlikely that your exchange will distribute eosDAC tokens to you unless they confirm this publicly BEFORE the April 15th snapshot! Therefore if you are holding your EOS tokens on an exchange please contact them immediately (via a support ticket) to demand they distribute your eosDAC tokens, a suggestion of what you might write follows below:

To whom it may concern,

I currently have EOS tokens on your exchange. On the 15th April at 01:00 UTC, a leading EOS Block Producer candidate, eosDAC (https://eosdac.io), will be airdropping 75% of it’s tokens to EOS token holders worldwide at a rate of 1:1.

Please confirm to me as soon as possible that you will also be taking this snapshot and then distributing the eosDAC tokens to your customers once you receive them from eosDAC in late April / early May.

If you are unable to support this airdrop, whose tokens I believe will be of significant value, then I will have to move my EOS tokens off your exchange to another exchange that will be distributing these tokens, or to a wallet for which I control the private key,

Please make sure you are signed up to our newsletter and we will announce any exchanges that confirm that they will be distributing the eosDAC airdropped tokens. We will also list this on our Tokens page http://eosdac.io/tokens

It is the vision of eosDAC that EOS.IO block production should be open for everyone to contribute and benefit. To realise this vision, eosDAC will be an evolving Decentralised Autonomous Community (DAC) focused on becoming a leading EOS.IO Block Producer serving the EOS communities worldwide. In doing this, eosDAC will create the tools and smart contracts it needs to function. It will share these with the EOS communities to help other DACs thrive on the EOS.IO blockchains.

eosDAC is currently expanding operational facilities, all of which will be fully implemented before the end of May. The key strategy is to achieve a wide geographic and jurisdictional coverage with block-production infrastructure to be located in the United Kingdom, Romania, Gibraltar and South Korea. The Launch Team will use its considerable experience of high-level data centre operation and Tier 1 internet working design & implementation to ensure shortest latency, maximum efficiency and solid redundancy within our network architecture.

Thanks. I will vote for you. I hope you get to become a bp.
Good luck and thanks for the airdrop!

Do I need to register my ETH address to EOS first in order to receive the airdrop?

I get this link from one YouTube user https://mobile.twitter.com/search?q=%40exodus_io%20eosdac&src=typed_query 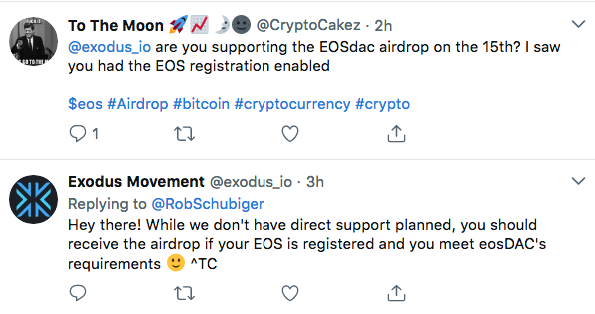 It is difficult to know if this is an expensive coin or not, it has a market cap of $110 m at 11c and we don’t know what it will earn in EOS, to value it properly. Sounds risky, has anyone got any good information on likely financials to support this kind of market cap. I like EOS but am just careful about buying into anything with a large market cap when it is unproven.

Will Exodus Wallet be supporting manual airdrop or must be strictly MEW?

Anyone know if Kraken will be distributing this?

What are the plans for the remaining 25% of eosDAC tokens?

I believe that is up to the community.

Received my #EOSDAC airdrop yesterday. Thanks, already added to my portfolio tracker and monitoring the price. Interested in seeing how this and the whole EOS eco system progresses from here.