For this post I will set aside all claims on the technology that EOS has or claims to have, the real world use cases, or their whitepaper and roadmap, and I will only focus on how they approached the crowdsale, which really shows the intentions behind their actions.

EOS is the newest project backed by Daniel Larimer (Steemit, Bitshares), and probably the most hyped up project in recent times, with a record breaking ICO having sold just 20% of the total supply.

They created an unusual way to distribute their tokens, through a continuous ICO that will last 341 days in total. According to Block.one (development team behind this project), this is the fairest way to make a cryptocurrency crowdsale, due to the fact that it will create a fair market value.

This makes a total supply of 1 Billion tokens

Before one can analyze why or how the price has grown so much so fast, it is important to understand the intentions behind this very clever move.

So on one hand, tokens are being distributed on eos.io website, at a rate of 2,000,000 every 23 hours, without a fixed price, which will depend on how many ETH tokens are raised on every period.
On the other hand, some of the main exchanges, with highest liquidity in the world, listed the EOS token with parities to USD, BTC and ETH, so that people can buy it with many different payment methods.

Now we know that there are two different roads to access to these tokens, and just one of them shows the price we are actually paying for them. This road has pushed the price in an upwards trend, with a significant increase (over 4 times).

We investors always try to get the best deal for our money, so we are forced as potential buyers to go to eos.io website to try and speculate on the price we might get if we join the ICO.
The way to do this is by dividing 2,000,000 that are distributed by the total amount of ETH raised in every period, and ETH's current price.
This is a very dynamic figure which can only be estimated accurately if one manages to be among the last buyers of a period, with little or no delay from the moment when buy order is placed until it's filled, which is not the case anyways.

Since we are not naive in crypto world any longer, and we've been present to too many market manipulations, it's safe to assume that the pump in price is artificial.

AND WHAT IS THE REASON FOR THIS?

The main reason is because just 20% of the total supply has been released, and with this amount it is easier for whales (aka development team) to represent a significant portion of the total price action, and move the price at their will.
Hype is created, and people don't want to miss out on such an amazing opportunity, so they jump to eos.io website to dump their ETH, hoping to get a better price than the exchange. 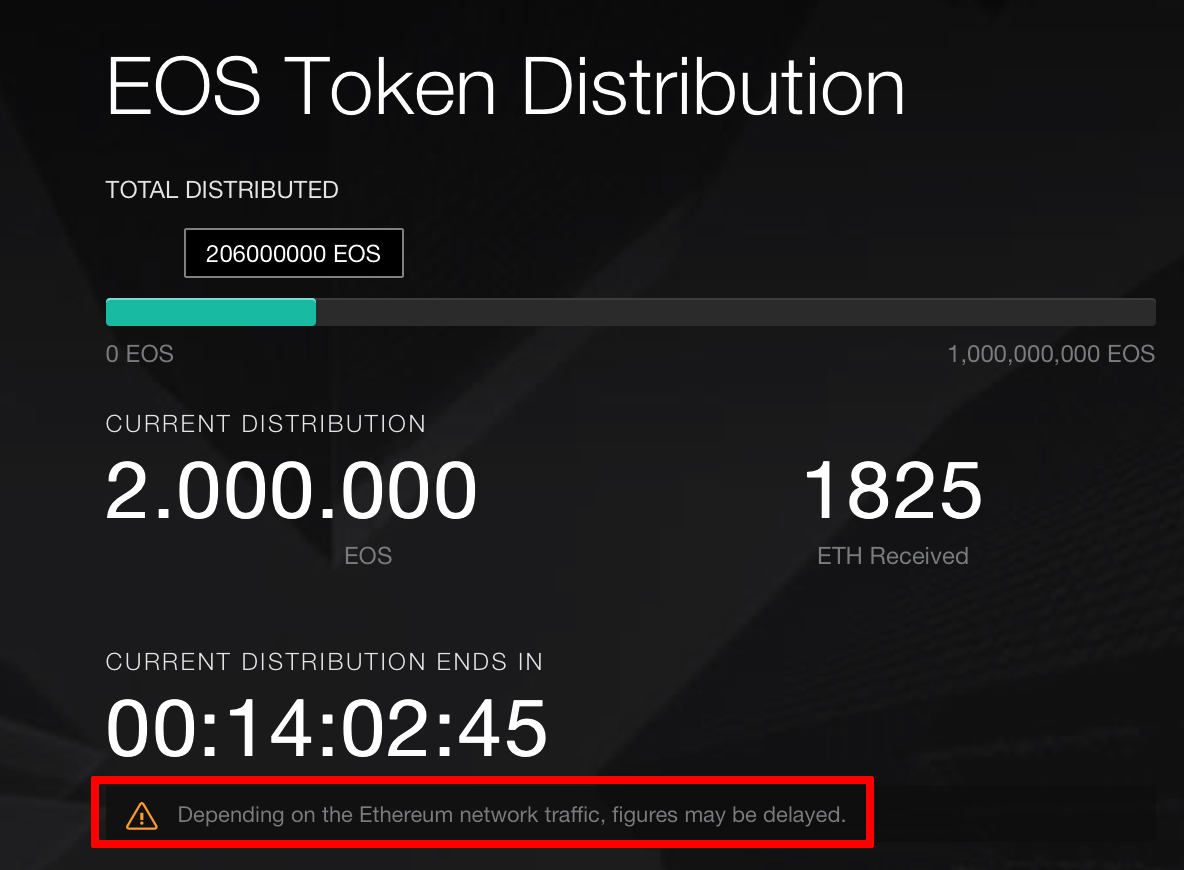 But Block.one is not a team of stupid people, and they protect themselves saying Depending on the Ethereum network traffic, figures may be delayed., so you cannot easily predict the price you will get.

Anyways, if you are planning on putting your hard earned money into this project, just take into account that there are still almost 4 times the current supply to be dumped into the market, which will create huge inflation sooner or later (probably once the development team stops pumping the price and we see the real demand for this token).
Just take into account that at a price of 4$ a token, you are investing in a project that should be worth 4 Billion USD for it to be a fair price.

Make your own decision, but don't overlook people's intentions, and always try to think why things are done the way they are.
And in this case, think why they sell their token both on exchanges, with a clear price, and on their website, with a hidden price.

It is kind of hard for block.one to pump when we cannot buy eos and will be audited to prove it.

Come on, are you kidding me?
Are we not talking about DECENTRALIZED technology here? Enabling the possibility to easily hide our transactions? Are you telling me you cannot use your BTC or ETH to anonymously buy EOS on exchanges?
Do you think someone believes this?

Thanks for the write-up. Haven't touched it, yet, though I think the platform will be a sight.

I did want to focus on how it's being distributed rather than the potential of the project itself.
I'm glad you read it, I follow your channel and I want to thank you for everything you do for cryptocurrencies.

Thank you for this. You are right better to wait till it stabilizes plus I'm in the U.S they have a policy against U.S users buying you don't even have an option unless you use a VPN which I would advise against !

I don't think it is a scam, is just overhyped at the moment, so I would wait until it drops back down to a dollar or 2 to buy it, good post

The fact that they are hiding your article show their real intention. I have invested in EOS from exchange as well as from their daily ICO several times . What I experience was exactly you have describe in this article . The ICO sales was artificially pump up at the very last minute to distribute the least number of token to the buyers. Token sales will normally jump from 7000-8000 Eth to 16000-18000 Eth in last 3-5 mins . I should think that 7000-8000 ETH are organic numbers but the rest is better to leave it to your imagination.I hope that anyone looking to invest would stay really clear of this coin.

Maybe. I think BTC dominance is coming to an end though.

I had a look at the EOS website and decided to wait and see what happens.

It is a very clever way of Pumping the price. Where it will all end. I have no idea.
Thanks for sharing this Post.

Thanks for the great article.
In my opinion it is mostly the best to not invest into an ICO and wait for the price to stabilise.
But this long ICO-Time brings a whole new dimension of complexity to it.

It does complicate things for us investors, although I do not think many development teams have enough power to list their projects in these exchanges as EOS did.

The strategy worked out for block.one as they reaped a load of money in round 0 whereas the rest of the rounds do not matter that much anymore. I suspect interest will wane, especially if block.one remains silent for the time being (no fancy press conferences and announcements). This serves the 2nd part of the strategy: the opportunity for small investors to get in at a reasonable price point.

Your article is really good sad that you got censored. Eos is very big marketing behind but still I see very much potential. We dont need to have exactly the same opinion on point, but I think its really important that you can say what you want without being punished.

But at all my advice buy later the interest could sink.