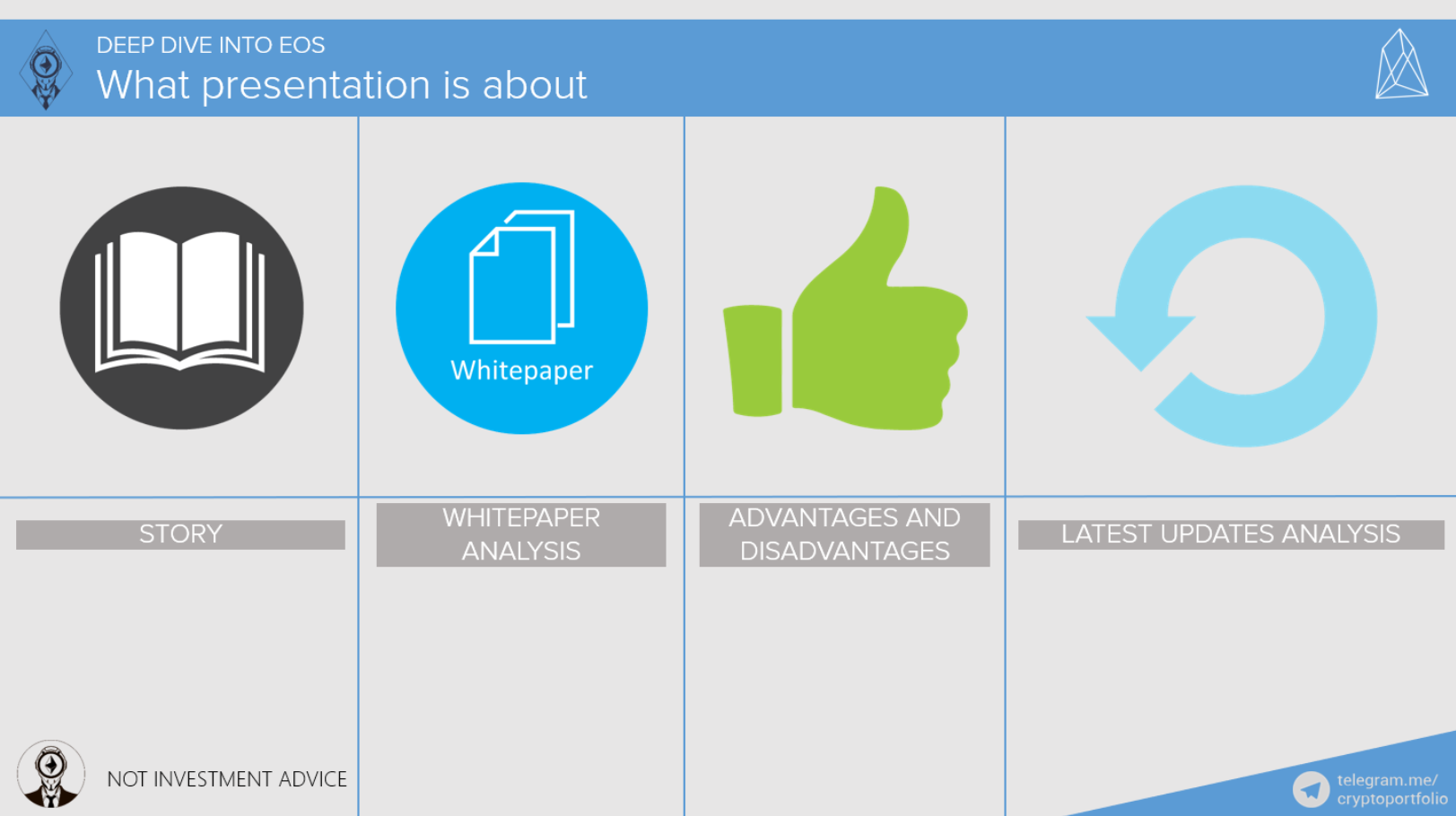 What will you see in this presentation? We will start with the story of the project. How exactly it was introduced to the world.

Then, the largest part of my presentation, 10 slides of whitepaper analysis.

Third part is we will cover the main criticisms of EOS project and its advantages.

At the end, we will check how exactly EOS was able to deliver on its promises and what team has achieved so far. I would like to start by telling you how EOS was introduced to the world. And I cannot tell you this before explaining you who Daniel Larimer is. Dan founded two quite popular projects, Bitshares and Steemit. Steemit, which is like medium blog but you get paid for articles in cryptocurrency, currently stands as 1008 most popular website in the world, up from 20000 in April 2017. Quite amazing, right? Also, Steemit has $441mln in capitalization. Bitshares is another Dan’s project. It is decentralized digital exchange on blockchain and stands at $366mln capitalization. At some point in both projects’ lives, Daniel decided to quit and create other projects.

This other project is EOS and it was unveiled to the world in May 2017. During this time, EOS created its social media accounts and many people saw the first teaser of EOS on YouTube. It is interesting to note that many people got interested, because Daniel Larimer’s participation usually leads to increase in your wealth if you participate in his projects.

…but the hype really started after Daniel Larimer’s presentation of EOS on Consensus 2017. BTW, first time I noticed this presentation was due to my subscription to the Russian crypto YouTuber, who translated Dan’s presentation in Russian (video was watched 39k times). I got curious and watched the original. I was impressed with the quality of presentation and EOS project. Judging from the inflow of people to EOS social media platforms, I wasn’t the only one. As you may know, I am a huge Ethereum maximalist but EOS promised to do the same things as ETH but better. And at this time I thought that EOS could finally be the real competitor of Ethereum.

Blockchain capital, Fenbushi capital, Yunbi, and Bitfinex were intial investors into EOS project. Participation of this kind of high-quality funds and digital exchanges can tell a lot about the quality of the project.
Currently, the project is developing at a very fast speed by block.one, a Cayman Islands company. I have a lot of slides, which almost completely disclose this project from all sides, so if you truly want to understand this project, take a seat and let’s go. 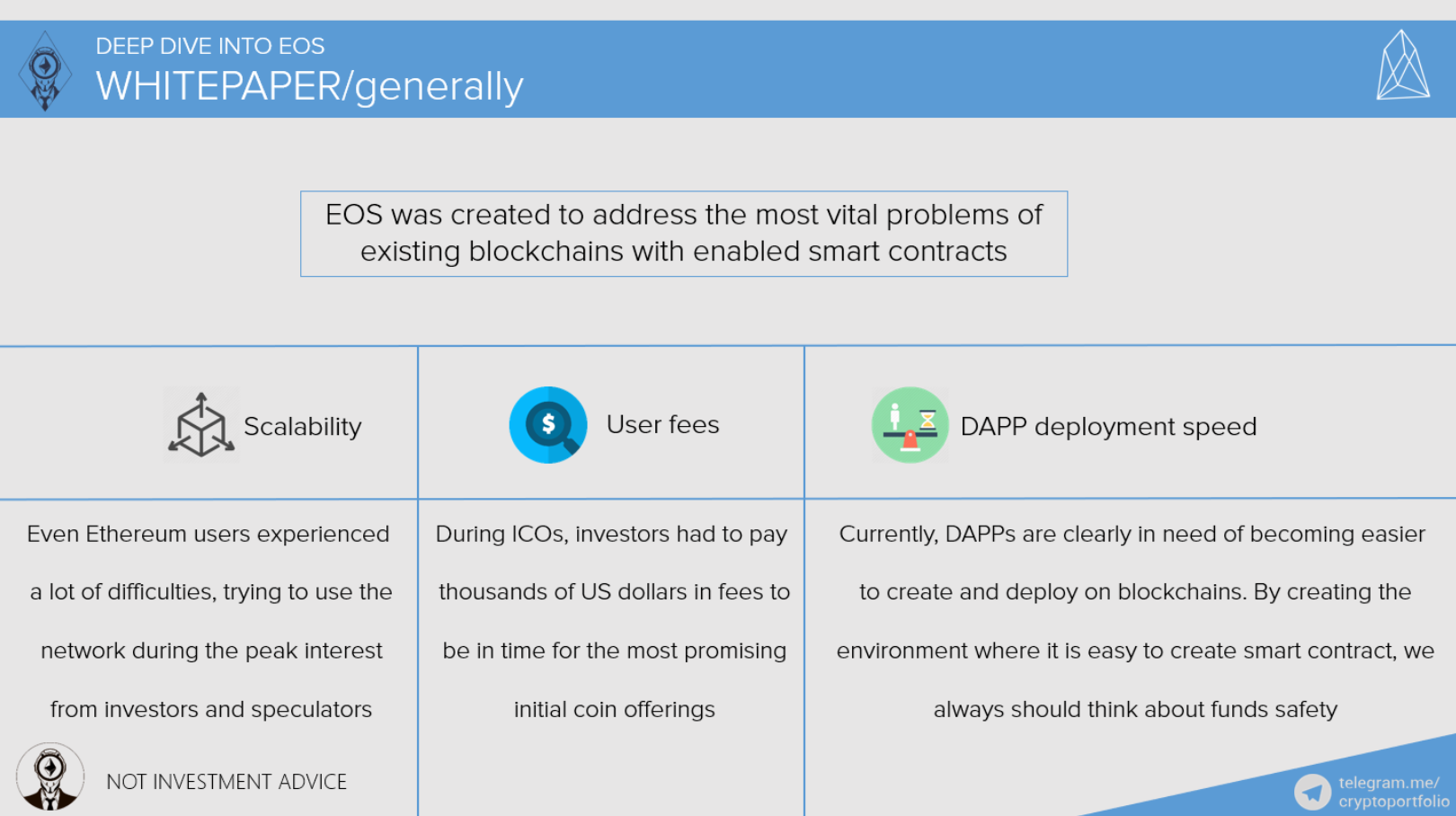 As you know, each project in the initial coin offering space is trying to solve certain problems. EOS is no exception.
First and foremost, Scalability. Bitcoin and Ethereum in their current form cannot process number of transactions that could accelerate cryptocurrency mass adoption. During the most busy days in December 2017, even Ethereum was unusable.

Next big problem is certainly user fees. During ICOs, investors had to pay thousands of US dollars in fees to be in time for the most promising initial coin offerings.

Ease of deployment DAPPs is another big thing. DAPPs are clearly in need of becoming easier to create and deploy on blockchains. By creating the environment where it is easy to create smart contracts, we always should think about funds safety. What are the main targets of EOS? Team thinks that in order to become the best in the smart contracts space they need to:
• Support the usage of the network by millions of users

• Make it easy to upgrade and recover from bugs 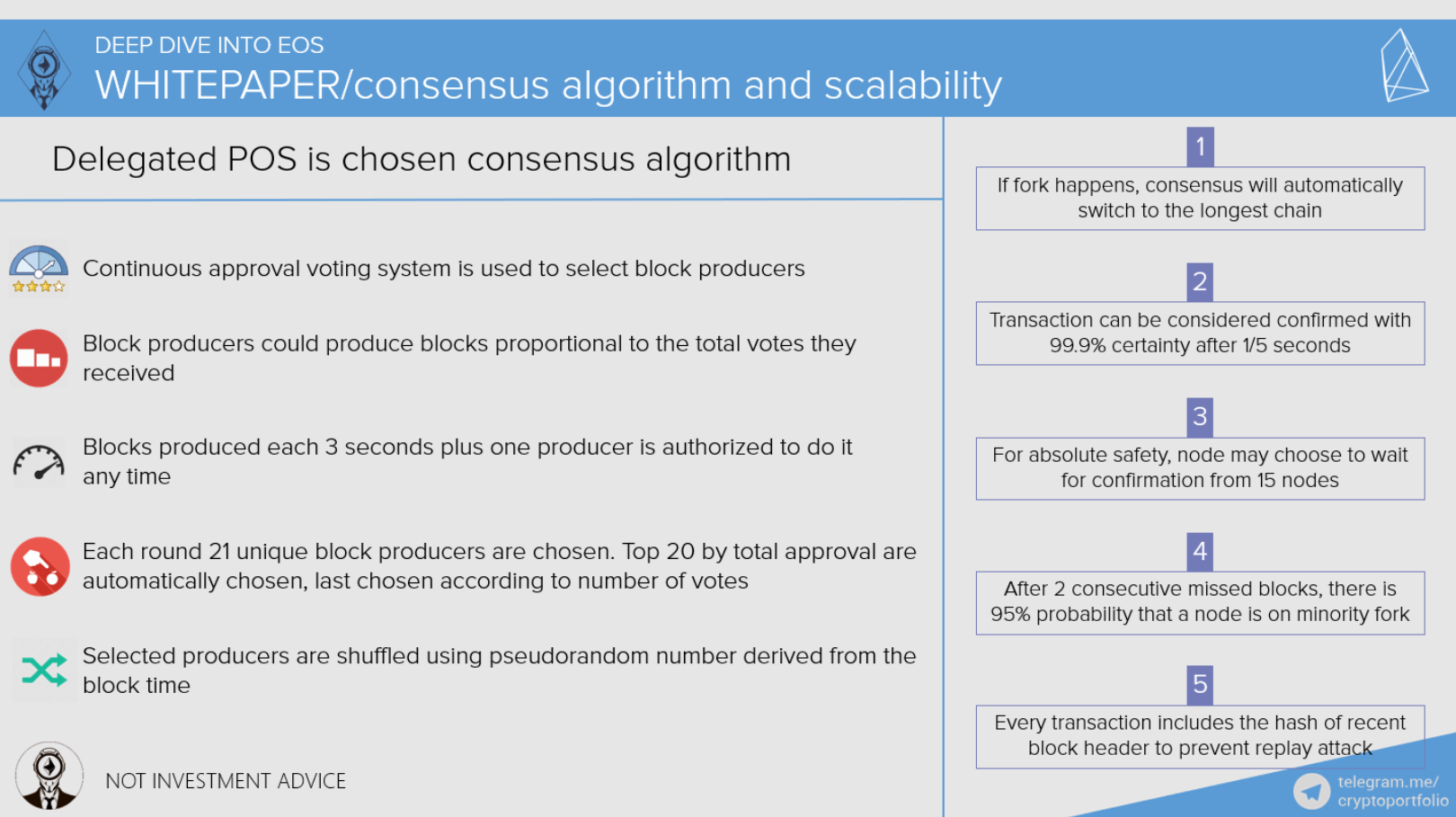 What algorithm must be adopted to make the network that will be able to process so many transactions? Delegated Proof-of-Stake is the consensus algorithm that can do that. What are the main features of this consensus?

• Each round 21 unique block producers are chosen. Top 20 by total approval are automatically chosen, last chosen according to number of votes

Also, I would like to give you five interesting facts that are necessary to remember, while using DPOS:

I. If fork happens, consensus will automatically switch to the longest chain

II. Transaction can be considered confirmed with 99.9% certainty after 1/5 seconds

III. For absolute safety, node may choose to wait for confirmation from 15 nodes

IV. After 2 consecutive missed blocks, there is 95% probability that a node is on minority fork Another big thing that is liked by many EOS investors is how accounts will function in this blockchain. EOS concentrates on making accounts easy-to-use, easy-to-create, transaction fee free, and safe. Other features of accounts on EOS:

• All accounts can be referenced by unique human readable name of 2 to 32 characters in length. For example, if I can be fast enough, I can create “CryptoPortfolio” wallet in EOS. So you will be able to donate me by sending tokens by writing correctly my name

• Accounts must be funded with minimum account balance at the time they are created to cover the cost of storing account data. Yep, user fees are non-existent, but account must have tokens to function

• Permission management system will give accounts fine grained and high-level control over who can do what and when. Every account may be controlled by any weighted combination of other accounts. You can have one family account that can be used by any family member

Another great thing is how EOS protects accounts:

• You can make delayed txs. This way, if somebody is trying to send tokens from your account to other wallet, you will receive notification to your email that, for example, tomorrow your money will be transferred to other account. It will give true owner of account time to restore his wallet and cancel unwanted transaction 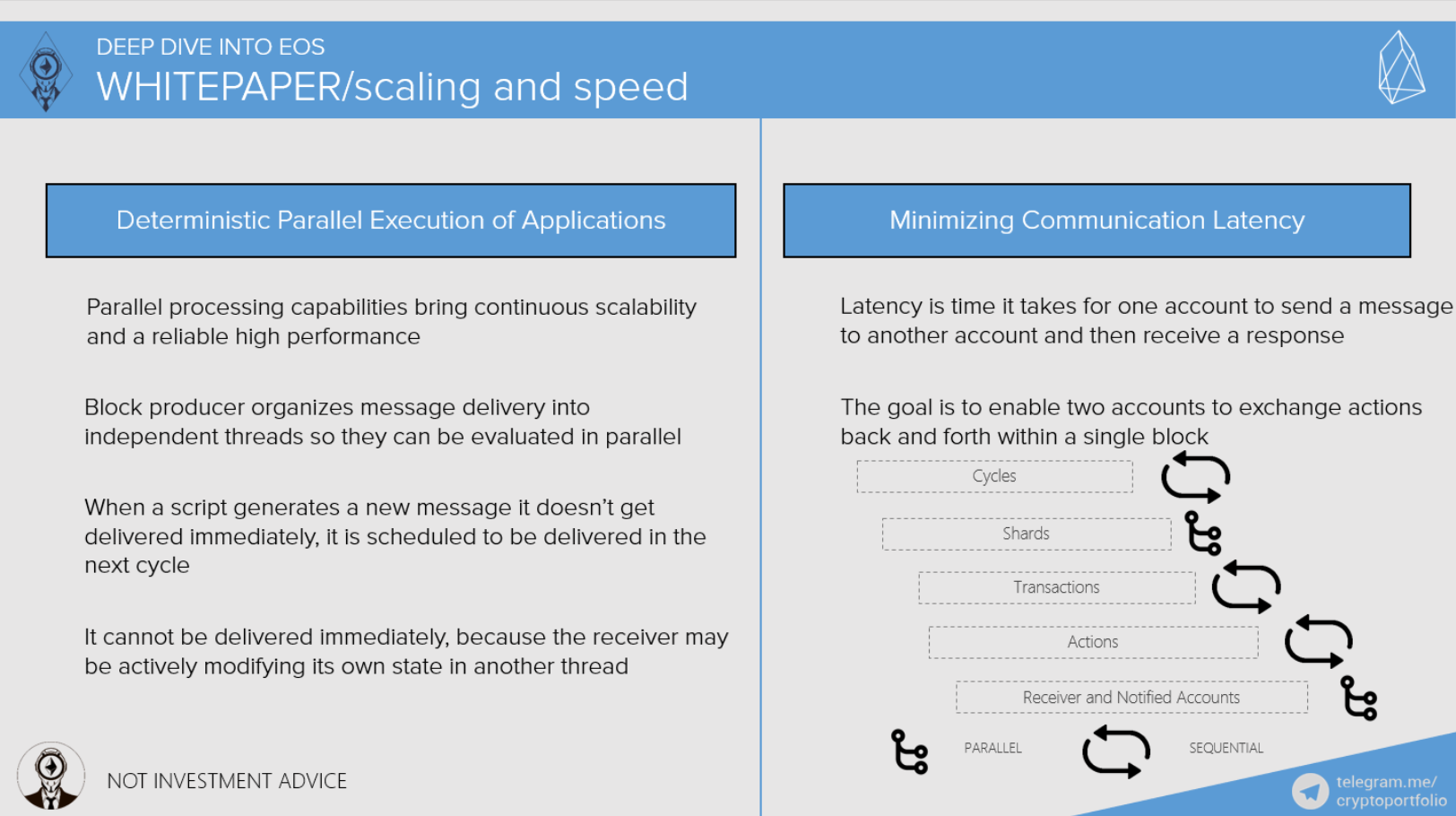 How does EOS achieve scaling?

• When a script generates a new message it doesn’t get delivered immediately, it is scheduled to be delivered in the next cycle

• It cannot be delivered immediately, because the receiver may be actively modifying its own state in another thread This is the most interesting part for investors, economy of EOS.

Let’s start by recognizing the main resources that are consumed by decentralized applications (smart contracts):

• Computation and Computational Backlog. Computational debt is calculations that must be performed to regenerate state from the message log. If the log becomes too large then it becomes necessary to take snapshots of the blockchain’s state

• State Storage. It is information that is accessible from application logic. It includes such things as order books and account balances

The foundation of EOS: 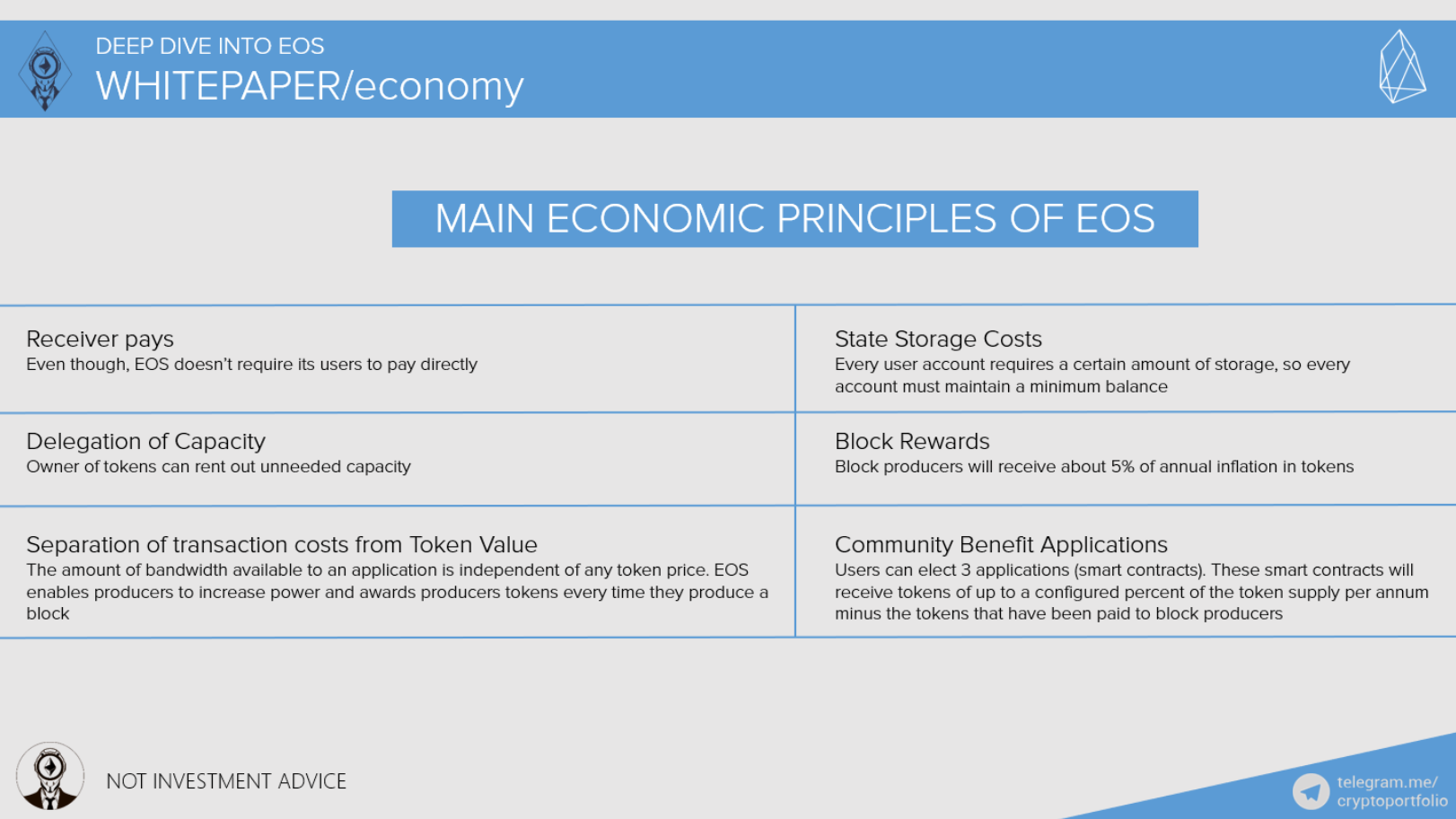 There are six most important economic facts about EOS:

• Receiver pays. Even though, EOS doesn’t require its users to pay directly

• Delegation of Capacity. Owner of tokens can rent out unneeded capacity

• Separation of transaction costs from Token Value. The amount of bandwidth available to an application is independent of any token price. EOS enables producers to increase power and awards producers tokens every time they produce a block

• State Storage Costs. Every user account requires a certain amount of storage, so every account must maintain a minimum balance

• Block Rewards. Block producers will receive about 5% of annual inflation in tokens. This is how block producers are compensated when users don’t have to pay transaction fees

• Community Benefit Applications. Users can elect 3 applications (smart contracts). These smart contracts will receive tokens of up to a configured percent of the token supply per annum minus the tokens that have been paid to block producers How important is governance? ABSOLUTELY important! Governance is the process by which people reach consensus on subjective matters that cannot be captured entirely by software algorithms.

There will be terms of service agreement or a binding contract among those users who sign it, referred to as a "constitution". The content of this constitution defines obligations among the users which cannot be entirely enforced by code. Each time you make a transaction, you automatically sign the constitution of EOS 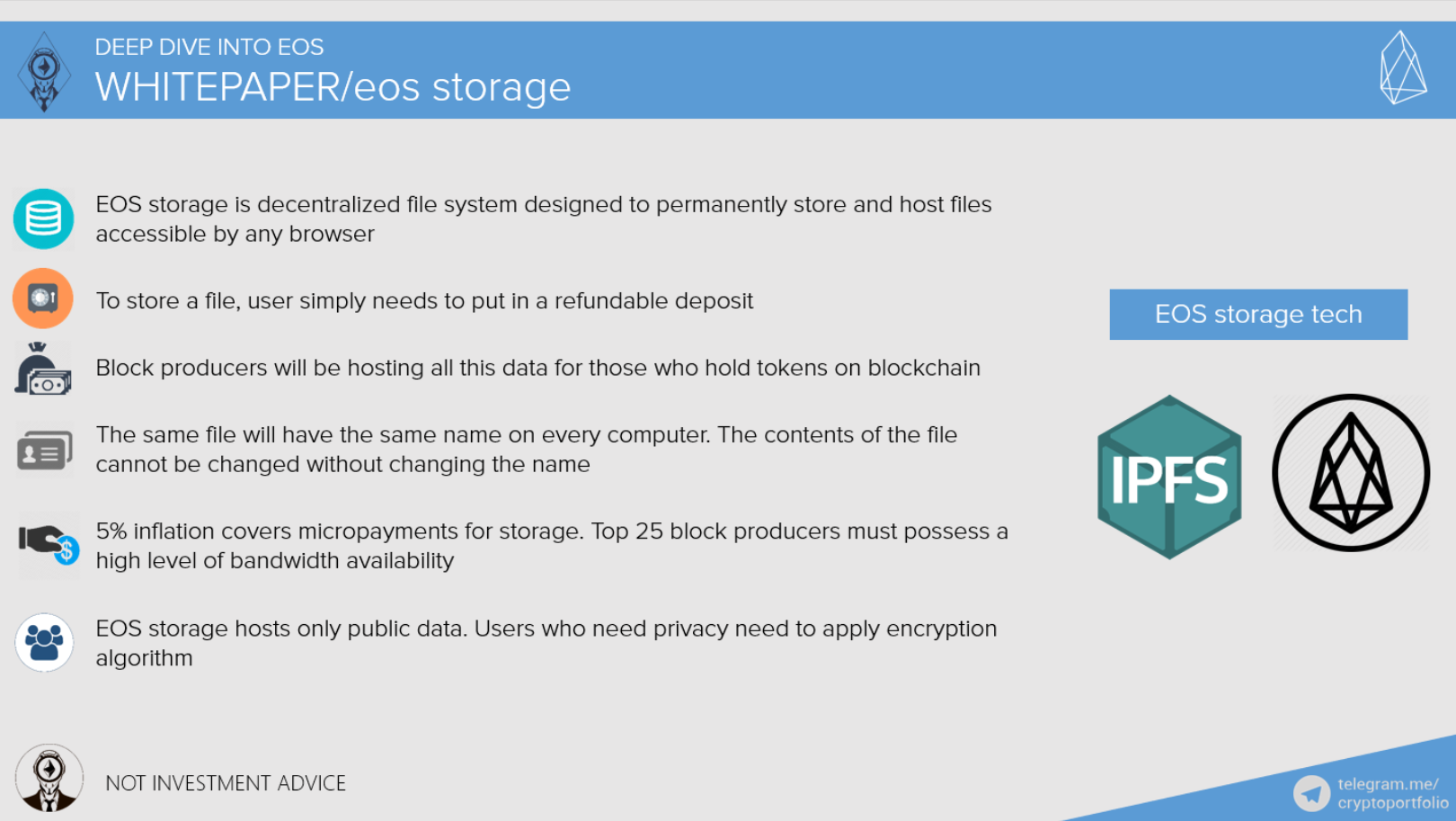 EOS team understood the importance of decentralized file storage, so they created one more whitepaper but for EOS storage software. What is it?

• To store a file, user simply needs to put in a refundable deposit

• The same file will have the same name on every computer. The contents of the file cannot be changed without changing the name Some interesting facts from FAQ of EOS.

I. Block.one will not launch any public blockchain platform adopting EOS.io software. Someone from community has to do it 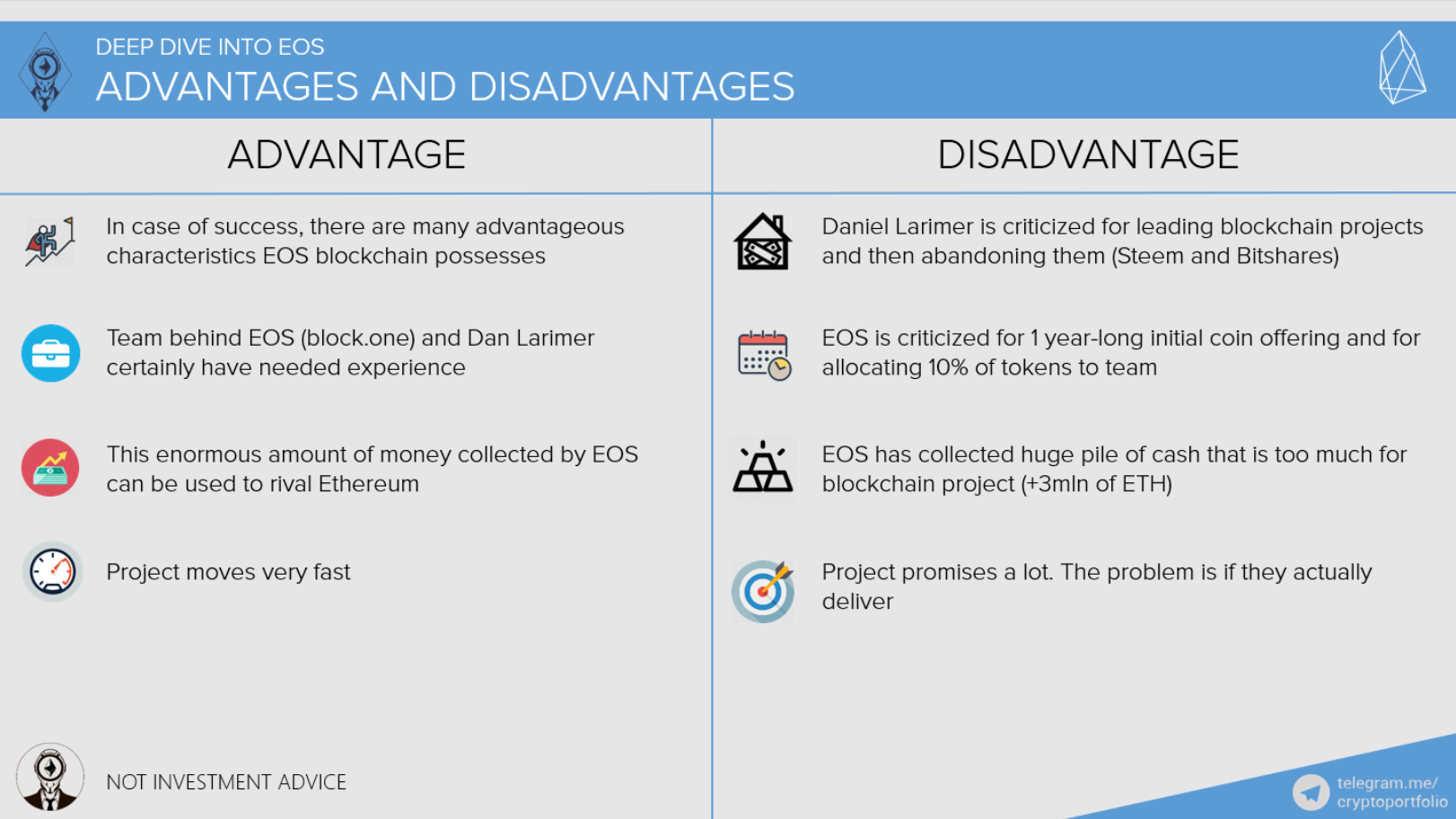 • In case of success, there are many advantageous characteristics EOS blockchain possesses

• Project promises a lot. The problem is if they actually deliver And we are moving to the last slide of my presentation! Let’s take a look at what EOS team has achieved since May 2017!

• May 2017. Project was announced. Dan Larimer made his famous presentation in Consensus 2017

• June 2017 until now. ICO of EOS has already collected more than 3mln. ETH

• September 2017. EOS testnet released! Developers could test the network since that month

• November 2017. EOS capitalization reached $1bln. Currently, it exceeds $4.7bln. Even after the fall of the whole cryptocurrency market capitalization from $800bln to $283bln!

• December 2017. EOS Dawn 2.0 released. It includes a lot of things, but particularly important changes were made to SDK, general infrastructure, management and governance.

• January 2018. Block.one announced the creation of $50mln. fund that will finance the development of DAPPs on the platform. I think that money is a great incentive for blockchain developers to start creating their decentralized applications on EOS

Well, thanks for listening or reading until the end. In the nearest future I will create another video and blog post on steemit called “Why EOS will be huge long-term” where I will make economic forecasts and compare EOS to other platforms. So subscribe and follow =)

CoinCheckUp.com - on of the best (or even the best) stats, charts, data and analysis of crypto.

Really exzellent overview! Really covering every major aspect of EOS. I have researched this project as well, especially for the weak points, your address, my conclusion being, most aspects you could see as weakness, actually turn out being a strength.

Enjoyed this breakdown. Should be interesting for EOS now that June 1st is approaching.

Awesome work @cryptoportfolio, if you like EOS you will love Hashgraph ;)

what is hashgraph ?? Why should we care about it ??

Because it has the power to disrupt ETH, EOS, Cardano etc,
Learn about it:
https://www.hederahashgraph.com/

Could you link me to an article comparing EOS to HederaHash? It feels Hedara using similar tech of IOTA + BFT that doesn't look like a big deal to me. The governance ideation is great but it looks nothing compared to EOS future planing.

Hi there, I don't know of a resource that directly compares Hashgraph and EOS, but I can tell you that Hashgraph has already partnered with several companies that intend to implement their technology https://www.hederahashgraph.com/token#partners
Here's a good interview with the creator of Hashgraph:

Thank you for the detailed write up! I liked one of your earlier write ups as well, I believe it was on Ethereum.

EOS has potential for sure. Looking forward to seeing what plays out with them. Good information here! I think EOS is certainly one to invest in for this year and 2019!

Great Article, thank you for taking the time to put it together. I assume that this was written pre Dawn 3.o because EOS will now be producing two blocks per second!

Thanks so much for the curation mate, truly honored!