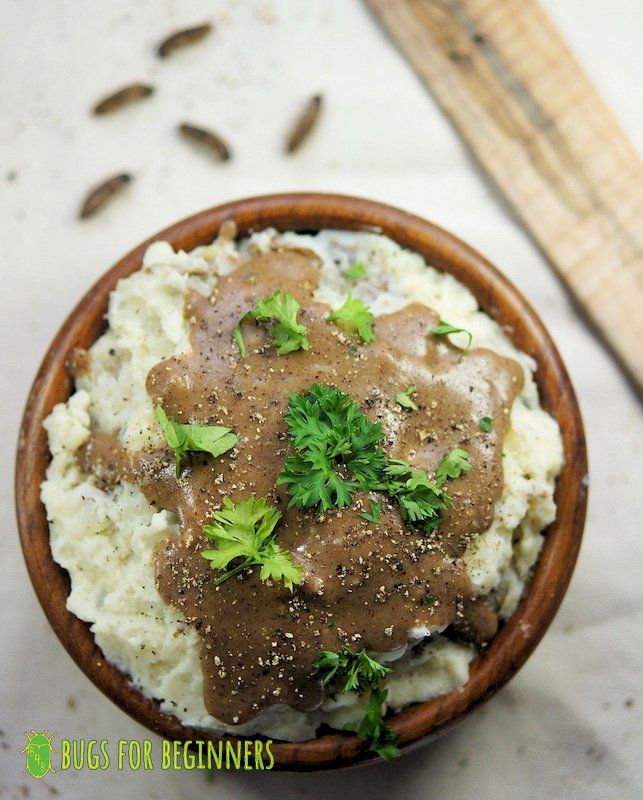 For US Americans, a heaping steaming serving of mashed potatoes and gravy is an essential comfort food, especially around the chilly holiday season. I used to think that making good gravy was a time-consuming process, the last task at the end of an exhausting all-day turkey ordeal. But it turns out, like a great holiday dinner, and so many other things in life, gravy succeeds not because of any solitary factor but rather due to the combined efforts of its individual components. Warmth, fat, salt, and protein, all play their part--but it doesn't need to be bird or beef protein; cricket will taste just as good. Mashed potatoes and cricket gravy will be a welcomed meal in any household trying to reduce their reliance on the products of factory farming. To make this dish dairy-free, butter can be replaced with the same amount of extra-virgin olive oil, and milk in the potatoes can be replaced with soy (but not almond) milk.

Baking powder and baking soda are both chemical leaveners, which is why they're included in almost all recipes for breads and pastries, to make them light and airy. They will work the same magic in mashed potatoes that they do in cakes, releasing CO2 and making them extra fluffy. If you use baking soda, you also need to have something acidic, like buttermilk or yogurt, but baking powder will work on its own.

This recipe is included in Bugs for Beginners, a cookbook which teaches Westerners how to prepare and safely eat insects.

Congratulations @mickeyd! You have completed some achievement on Steemit and have been rewarded with new badge(s) :