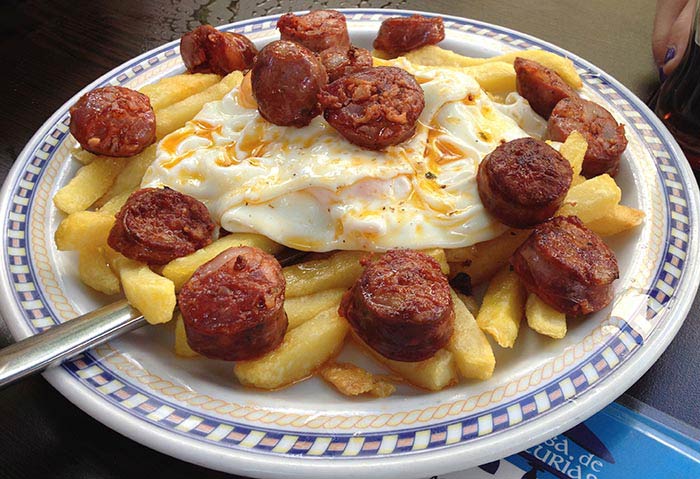 Broken eggs or fried eggs are one of the flagship dishes of Madrid's bars. They are very easy to prepare and there are usually many variations of this recipe.
What are broken eggs?

The exact definition of broken eggs is something like this: fried eggs fried in a frying pan with plenty of olive oil that are left almost raw so that the yolks break easily when they are served and then wet the fries, which are the main side dish of this dish.

In addition to French fries, fried eggs (also known as fried eggs) usually have another side dish that varies between sausage products, some fresh protein, or even vegetables and mushrooms.

Let's talk a little about the main ingredients:
The potatoes

Generally, for this dish we use traditional French fries, cut into sticks, but you can also use potatoes cut into wedges, slices and some people use chips. Whatever your preference, they should ideally be fresh and slightly crispy.
The eggs

If you know how to make fried eggs in a frying pan, you won't have any problems with this recipe. But you must leave the yolk quite liquid. You can season them with pepper and smoked paprika.
Ham, red sausage, mushrooms, etc.

You can make traditional broken eggs with ham or red sausage, as I mentioned earlier.
If you use ham, use freshly sliced slices.
If you're going for red sausage , or other protein, fry them a little in the same oil as the eggs.
If you include mushrooms or peppers, sauté them quickly just before serving.
Or you can be creative, mix ingredients, give it a personal touch. Don't limit yourself to what the recipes say, including this 😀

As you'll see, the ingredients in fried eggs are all high in calories, so we're talking about a fairly powerful dish, ideal for people who are very active, who are very hungry and don't care about anything or who are just carefree with a privileged metabolism.

Preparing broken eggs is extremely simple. And the variations are only limited by your imagination.

Let's go now with the recipe!

Recipe for broken eggs with red sausage or ham

It is important to clarify that, if you do not want to prepare them with red sausage but with ham, for example, simply substitute one ingredient for the other and follow the other steps of the preparation.

Remove the skin and cut the potatoes the way they are traditionally made. But you can also make them on slightly thick wheels for a change.
Fry the potatoes in a large skillet over medium-high heat for 10-12 minutes with plenty of oil.
Meanwhile, cook your red chorizo in another frying pan with a drop of oil. Chop it on thick wheels to make it faster.
When the potatoes are ready, remove them from the heat and drain the oil well. Put them on a plate with absorbent paper and add salt to taste.
In another frying pan, with plenty of olive oil (you can use the same as the potatoes), fry the eggs taking care that the yolk is not overcooked, the idea is to make it liquid inside. Withdraw when ready.
Now simply serve the potatoes on a plate first, the 2 eggs on top and the red chorizo chopped on wheels.
Add paprika powder and salt to taste.

Some people, and in fact you can see it in some bars, serve this dish with literally broken eggs: they put the potatoes in a casserole dish, lay the eggs on top and cut them with a knife so that the yolk starts to spill, put the ham, some peppers and take them to the table. Feel free to do it at home.

Congratulations! This post has been upvoted from the communal account, @minnowsupport, by kaudipo from the Minnow Support Project. It's a witness project run by aggroed, ausbitbank, teamsteem, theprophet0, someguy123, neoxian, followbtcnews, and netuoso. The goal is to help Steemit grow by supporting Minnows. Please find us at the Peace, Abundance, and Liberty Network (PALnet) Discord Channel. It's a completely public and open space to all members of the Steemit community who voluntarily choose to be there.