Hi friends, I hope you're fine?

I heard this morning on the radio, coming to work, from the World Economic Forum in Davos.

Davos is a municipality in the canton of Graubünden, located in the upper valley of the Landwasser River in the region of Prättigau / Davos, in eastern Switzerland. It is also a winter sports resort and hosts events such as the Spengler Cup in ice hockey. The World Economic Forum is a non-profit foundation that does not advocate politics and is committed to improving the state of the world.

non-profit. It is known for its annual meeting, which brings together business leaders, policymakers from around the world, as well as intellectuals and journalists, to discuss the world's most pressing issues, including in the areas of health and safety. of the environment.

In 1971, Klaus M. Schwab, professor of economics at the University of Geneva, invited 444 business leaders from Western Europe to participate in the first European Management Symposium organized in the new Davos Congress Center.

Under the patronage of the European Commission and various industry associations in the Old Continent, Klaus Schwab intends to familiarize European companies with management practices in the United States.

He then created the European Management Forum in the form of a non-profit organization based in Geneva and invited European business leaders to Davos, where the annual meeting is held in January.

The European Management Forum is renamed World Economic Forum in 1987. Its purpose is to further expand its reach and provide a forum for resolving international conflicts. Politicians consider the Davos demonstration a neutral platform to help them settle their differences.
In 1988, Greece and Turkey signed the Davos Declaration, thus removing a possible imminent war.

In 2008, Bill Gates delivered a speech on Creative Capitalism, a form of capitalism that aims to both generate profits and solve injustices around the world and harnesses market forces to meet the needs of the poor. 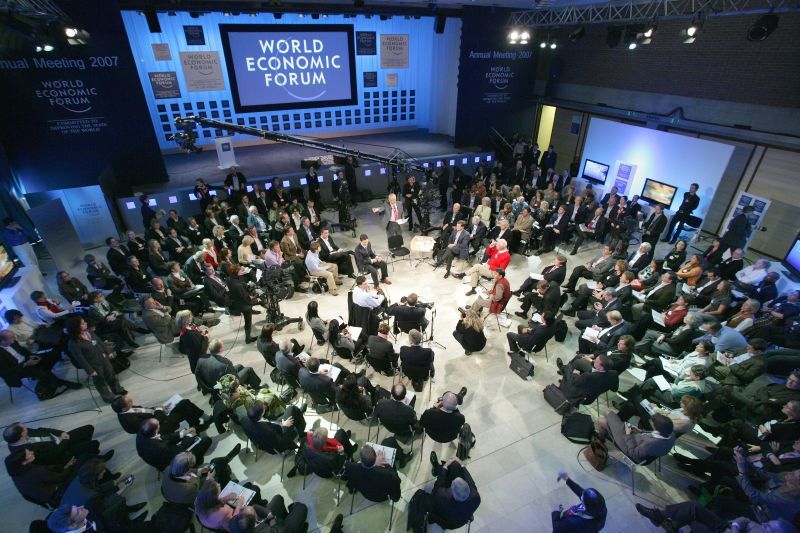 It has observer status with the UN Economic and Social Council and is under the supervision of the Swiss government. The highest forum of the forum is the Board of Trustees, made up of 22 members, most of whom are business leaders, such as Renault CEO Carlos Ghosn, French advertising manager Maurice Lévy, CEO of Alcatel, CEO from Goldman Sachs and some political figures such as Queen Rania of Jordan, IMF President, former UN Secretary-General Kofi Annan.

Funding for the forum is provided by member companies that are multi-national corporations with revenues of more than US $ 5 billion. They are among the best in their industry and play a predominant role in the future development of their industry or region.

In 2008, 250 personalities, such as heads of state or government, ministers, ambassadors, officials or senior officials of international organizations, ... attended the annual meeting.

Samuel Huntington described the participants in the annual meeting as belonging to the species of the Davos man, a global elite whose members project themselves into a purely global dimension.

I did not know this forum lol. I will have learned things, fortunately not only the politicians who care about our world huh

Thank you for your visit to the history of the World Economic Forum. I believe that improving the state of the world is a priority, therefore this forum plays a big role anyway. Uniting leaders of business, talented people and significant personalities, they fully take steps towards changing the world.
Thank you

World Economic Forum do great work for all, i like it,

I heard that Red Pulse Token will present its blockchain there, and also that HST token will be used for voting. Its cool that blockchain will get some attention there

It is an impressive gathering but I doubt its effectiveness

good work
thank you for sharing

Congratulations @lndesta120282, this post is the forth most rewarded post (based on pending payouts) in the last 12 hours written by a Superuser account holder (accounts that hold between 1 and 10 Mega Vests). The total number of posts by Superuser account holders during this period was 1572 and the total pending payments to posts in this category was $16274.36. To see the full list of highest paid posts across all accounts categories, click here.