Memo to 'Climate Change ' Mayors: One-World Rule by Any Other Name is the Same 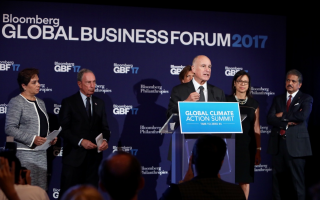 California Gov. Edmund G. "Jerry" Brown is shown here at a Bloomberg Business Forum in a public photo from the state's website. It's indicative of the likely and carefully cloaked profit motive behind the "climate change" movement among key city and state leaders.

A planet ruled by cities represents a new paradigm of global governance—of democratic glocalism rather than top-down imposition, of horizontalism rather than hierarchy, of pragmatic interdependence rather than outworn ideologies of national independence . . . the foundations for this new world are being erected in our age as cities collaborate.

— If Mayors Ruled the World: Dysfunctional Nations, Rising Cities by the late Benjamin R. Barber, founder of the Global Parliament of Mayors Movement

THAT ABOVE QUOTE by all indications is the credo of the Global Covenant of Mayors for Climate and Energy—which was created by the European Commission in 2008. The group went mercurial last June when U.S. President Trump gave a cold shoulder to “global warming” by announcing he was distancing America from the 2015 Paris climate agreement.

Coincidentally or not, Trump made the announcement in early June of 2017, right when the 65th Bilderberg Meeting was taking place a short distance from Washington in Chantilly, Virginia. A longtime Bilderberg-connected news organ, the Washington Post, trounced Trump for his Paris stance all weekend long, as the elite, secretive Bilderberg gathering concluded on June 4. Bilderberg’s core organizers follow the climate-change “party line” to the letter, which involves the leveraging of carbon credits as yet another profiteering scheme dressed in the seductive garb of “saving the world.”

So, it’s no surprise that those who want to rescue the world are awash in financial resources. Some of that is due to the leadership of people like former New York mayor and multi-billionaire Michael Bloomberg, among other deep-pocketed connections.

This mayoral vanguard, miffed that Trump would even utter a word against the Paris Agreement, bided its time and hit back by holding its first-ever North American Climate Summit Dec. 4-6 at Chicago’s Sheraton Grand Hotel, in collaboration with the city of Chicago. Yet only 50 mayors from across the world attended, amid lofty claims that 7,500 cities are under the sway of the covenant’s “climate change” worldview.

All of the attending mayors have gone on record, without any known dissent, that climate change caused by humanity’s industrial, agricultural and other routine emissions is an unchallengeable fact. Accordingly, they no longer traffic in more precise terminology like “global warming.”

They instead, of course, utter the nebulous “climate change” mantra nonstop. That way, seemingly unusual temperature shifts, or highly severe storms, drought etc., all can be attributed to humanity’s routine atmospheric emissions, without regard to other possible causes.

[For much more on other possible causes, including a perspective on geo-engineering, see the video below and keep reading as well]

In this You Tube video, Stop the Presses News director Mark Anderson details the Global Covenant of Mayors movement but, more importantly, discusses "the climate changers" by announcing upcoming action to reveal more details and awareness of verified weather engineering.

ARTICLE CONTINUES HERE . . .
While the gathered mayors on Dec. 5 signed the Chicago Climate Charter—to call for participating cities to undertake projects and policies to meet or exceed the emissions limits spelled out in the Paris Agreement—the very latest is that the covenant met again in Paris on Dec. 12 for the One Planet Summit.

There, two major news bulletins were issued, with one of them noting: “The World Bank partners with the Global Covenant of Mayors and will lend $4.5 billion [U.S. dollars] to ensure 150 cities have the funds to implement initiatives to increase sustainability and resilience and fight climate change.”

The other announcement stressed that, two years after the Paris Agreement’s ratification, three new initiatives and partnerships “will accelerate the implementation of the Paris Agreement in cities and local governments across the world.” This includes:

• The One Planet Charter, described as “a new commitment campaign that will help cities swiftly implement actions to ensure Paris Agreement goals are met.’

• Secondly, a new set of “breakthrough partnerships with the EU, [the] European Investment Bank (EIB) and the European Bank for Reconstruction and Development (EBRD),” under the “Global Urbis” umbrella. This additional expansion of debt to fight climate change “will help fill the urban financing gap, which is currently preventing many cities from implementing action programs.”

• And the covenant of mayors also “issued a called for Vertical Integration of Local Authorities in national climate investment plans, building on the need to show the importance of cities as economic actors contributing to the climate-finance opportunities latent in the Paris Agreement.”

This last item “underlines the need to provide pathways for active participation and engagement of sub-national governments in the formulation of national climate investment plans in line with the Paris Agreement,” according to the covenant’s news releases. This involves “accelerated tracks for sub-sovereign financing for Latin American cities. These mayors aim to work with city networks and financial-institution partners to release” what are called “Vertically Integrated Investment Plans” in 2018.

Moreover, the leaders of participating cities—which is said to include around 40 cities just in the UK alone, from Manchester, to Liverpool to London—“will bring detailed descriptions of their commitments to the 2018 Global Action Summit in California.” That event will take place Sept. 12-14 in San Francisco.

"Cities, states and businesses are leading the way on climate change because they understand the economic and health benefits of action," said Bloomberg, as quoted in a news release for the upcoming California gathering. "After President Trump announced U.S. withdrawal from the Paris Agreement, we created a new effort, 'America's Pledge,' to keep our nation on track to uphold our commitment. The Global Climate Action Summit in California . . . is a great opportunity to find new ways for governments and businesses to work together toward that goal."

A closer reading of the statements, remarks and news releases surrounding this issue shows that a key aspect of this matter is that, like the leadership of the broader “global cities” movement, these “climate mayors” have little or no qualm about usurping the role of national leaders.

True, improved local control can be a good thing in certain policy areas. But this “local globalism," or "glocalism," as these mayors would call it, appears to be a crafty, revolutionary means of undercutting national authority from the bottom up.

In other words, this movement is evidently just another form of hierarchy---another means of top-down rule by the financial elite and their carefully selected "wind-up toys" in the cities, states and among non-governmental organizations (so-called NGOs) and non-profits. Thus, this mayoral movement involves minimizing or doing an end-run around the consent of the people's elected legislatures while masquerading as "democratic" by substituting pre-selected groupings (NGOs etc.) for the people themselves. Real debate on "climate change" is not in the cards, as everyone in this movement MUST agree with the standard manmade climate-change worldview. Dissent in the world of "glocalism" will not be tolerated. It already isn't tolerated.

Chicago Mayor Rahm Emanuel, who already closed two area coal-fired power plants as part of the Windy City’s battle plan, noted in a news release: “Even as Washington fails to act, cities have the power and will to take decisive action.”

And Mr. Bloomberg, a leading figure in this movement, put it more bluntly: “All the U.S. cities signing the [Chicago Climate Charter] . . . sends a strong signal to the world that we will keep moving forward toward our Paris goal, with or without Washington.”

Furthermore, former President Barack Obama spoke at the Chicago summit Dec. 5, saying that cities, states and nonprofit groups have emerged as “the new face of leadership” on climate change.

Beyond such shifts in governance, these mayors are calling for radical changes in energy sources, with greatly reduced emissions and a dramatic overhaul of urban infrastructure, so participating cities and outlying regions can meet or exceed the Paris Agreement’s ambitious emission-reduction standards.

The Chicago Climate Charter that the mayors signed refers to the “nationally determined contributions” that national delegates adopted when they assented to emission-reduction goals specified in the Paris Agreement (under the United Nations Framework Convention on Climate Change).

“The Global Covenant has called for member cities to set targets that are at least as ambitious as their respective countries’ Nationally Determined Contributions, and through their commitments, cities within North America are already on target to reduce emissions [by] 2.72 gigatons of CO2e by 2030, or the equivalent of taking 585 million cars off the road,” the Chicago Charter states.

CO2e means carbon dioxide equivalent, a standard unit for measuring carbon footprints that expresses the impact of each different greenhouse gas in terms of the amount of CO2 that would create the same amount of warming.

This doesn’t mean that some summit ideas, like using more wind and solar power—including designing buildings to produce their own power, or even the solar street lights that are now taking root—are unwise, in and of themselves. The electrical grid’s known vulnerability perhaps could be reduced if more structures could be made self-sufficient, which is a more commonsense reason to pursue such an energy policy compared to flimsy claims about man-made temperature increases. And there are improved vertical-axis wind-turbine designs that enable power production with slower wind speeds, among other innovations that may spur some job growth and/or improve the environment while probably decentralizing power production.

But the fact that some individual ideas may have merit tends to cloud the apparent power grab in which these mayors are engaged, along with the distinct likelihood that some or many of the companies getting "green" contracts to transform energy sources and related infrastructure will be owned or controlled by the same government and corporate people pushing this "climate change" movement.

Meanwhile, the Chicago Council on Global Affairs, the Midwest-American version of the UK's Chatham House and New York's Council on Foreign Relations, held a summit-kickoff panel discussion Dec. 4, moderated by New York Times columnist Thomas Friedman—who’s indicative of the nearly seamless support that big media are giving this mayoral movement and the need to fight “climate change” in general. That and other discussions indicate these mayors, with the mainstream media’s connivance, appear to be devoted to making sweeping policy changes largely irrespective of national policy direction.