Poitín (pronounced potcheen) is made by fermenting grain usually malted barley although potatoes can be used or any thing that contains sugar or just sugar . Spirit distillation began in Ireland in approx. 584 AD. The know how may have migrated to Ireland along with Christianity , stills being used in the Middle East in the production of perfume, some genius of an Irish monk probably decided to make perfume from beer and happened up on hard liquor. Another bright spark said lets store it in oak barrels and forget about it for a few years and low and behold the Irish have invented whiskey, an Irish King marries a Scottish Princess brings a few barrels to the wedding and the scotch get in on the act, good news travels fast ! nowadays the Japanese are making damn good whiskey. 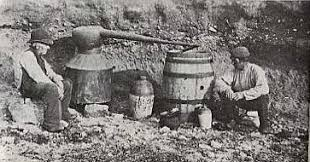 Poitin or poteen in English unlike whiskey normally isn't aged, it's distilled to a high volume up to maybe 80% vol and then diluted with spring water down to 60% vol to make it more drinkable although I did meet a man that used to age it, this fellow was quite a character, a Tipperary man , he had a friend working in the Guinness brewery in Dublin who used to bring him down suit cases full of mash from the brewery on the train at the weekend, he made his poitin and then he put it in oak barrels and buried it for a year or two the resulting product being a lot smoother and more flavorsome , a young whiskey basically 50% stronger than what was available legally and half the price, needless to say he had no shortage of customers,superintendents and priests among them, he combined this sideline with a hackney business , cars were scarce at the time , he told me he used to ferry missionary priests from parish to parish, these were the fire and brimstone variety whose mission was to scare church goers into obedience, preaching about the demon drink being a big part of their ridiculous repertoire , they were some of his best customers he said !

To make poitin you start by soaking your barley in water for a couple of days to soften it, barley is just the seed of the plant and what your trying to do is get the seed to germinate, to sprout, the starch then begins to convert to sugar, you then need to halt this process by drying quickly or it would develop mold and rot, this was traditionally done in turf fired kilns, smoke being drawn into the bottom of the kiln and up through the grain which would be spread on a platform the smoke eventually escaping out the top through a hole in the roof.

A picture of an old kiln in Oughterard ,Connemara, Co Galway. The barley once dried was ground into flour using mill stones . 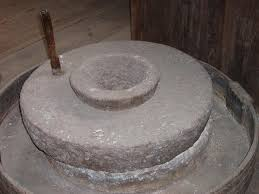 The flour was then mixed with spring water in a barrel usually a 40 or 50 gallon barrel, yeast added and heated over a fire to get the fermentation process underway, sealed up and left for 7 or 8 days until the yeast has gobbled up all the sugar and excreted as much alcohol as is heavenly possible, essentially what your left with is beer 5 or 6% vol if your lucky and this is what you distill to get your spirit , your grain alcohol, your poitin!

The author of the underneath extract is John Brennan taken from his 4th dissertation on poitin.

This stage of the process took place close to a river or water source away from prying eyes. Trusted lookouts might be placed in vantage points to keep an eye out for ‘Poitín Peelers’. The components of the still were usually hidden in the area and could be assembled easily. The still was filled to the three quarter mark, and the head was attached to the still and sealed with the ‘lutum’ mixture. The connecting pipe was attached to the head and the worm and again sealed with ‘lutum’. The worm was inserted in the barrel of cold water and a jug or other device was put under the outflow pipe ready to catch the distillate. The fire had to be lit from dry turf and sticks as damp turf would cause smoke and possibly give the site away. When the water reaches the boiling point of alcohol it evaporates up to the head and is transferred along the connecting pipe to the worm. When the hot vapour reaches the cold worm it condenses back to liquid form and the ‘Singling’ flows out. The first cup full of ‘singling’ is always shared with ‘na Sioga’ (the Fairies), so that they will help the poitín maker. This ‘Singling’ is too strong to drink and must be put through the process again. The poitín maker checks the distillate for alcohol by throwing it on the fire, when it no longer burns the run is finished and the still is taken apart and emptied (so long as he has no more ‘pot-ale’ to distil) the remaining pot-ale was again given to cattle. Some of the ‘singling’ was kept aside for medicinal purposes.

The ‘Singling’ was then put back into the still, which was re-connected and re-sealed then the fire re-lit. The distillation process was repeated and the distillate was now called the ‘Doubling’. This was the pure drop! The distilling continued until as before the spirit didn’t ignite. Again the still was dismantled. The only exception to this was in Donegal where the poitín makers ran the ‘Doubling’ through once more for an even smoother spirit, this was known as the ‘Priests run’.
After the still was dismantled the components were hidden or just buried until the next time they would be needed. The ‘Doubling’ was also very strong and sometimes water was added to make the poitín more drinkable.

This is the complete Irish documentary " Poitín; Is tUisce Deoch Ná Scéal (A drink comes before a story)"produced by "Blackstaff Media".

These Connemara boys are off their heads but sound, known for their intelligence and wit , bear in mind that this guy has put a away an awful lot of poitin in his day, he's an old man sitting beside his fire and he's still rock solid !

I hope you enjoyed it Steemians , I love these videos , this is as Irish as it gets , that kiln is absolutely beautiful in my opinion, but beauty is in the eye of the beholder they say .I felt the need to share this content with you guys, its unique !