Remembering Rock and Roll At the Singer Bowl 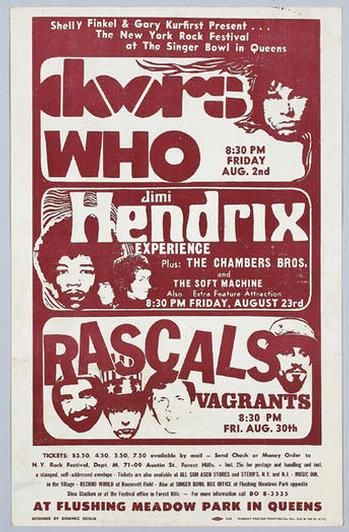 (Another version of this article originally appeared at AmericanChronicle.com on May 1, 2007)

A hot, humid night in Flushing Meadows Park, Queens, New York. The date was  Friday, August 2nd, 1968. The Singer Bowl -- built by the Singer Sewing Machine  Company for the 1964 World's Fair -- was an oval-shaped arena with steep-sloped  bleachers and a central rotating stage, powered by electric motors. A kind of  rotating theater-in-the-round. This night would be the kick-off show for that  summer's New York Rock Festival, which extended through the month of August.  There were three bands booked to play. Absent from the handbill circulating  throughout the city was a local act, Kangaroo. Next up was a British band still  somewhat underground to American audiences, in spite of having already released  several records -- they called themselves the Who. Headlining the show was a  group whose favorite crowds were in the Big Apple, though they originated across  the continent in Los Angeles. That, of course, was the  Doors.

Concert-goers were still arriving around 8:30 PM when Kangaroo took the stage. The scant audience seemed to have little patience with them.  Kangaroo had made a record earlier in the year, and while the band featured vocalist/drummer ND Smart II (who would later join guitar great Leslie West to form Mountain -- see mention of the Vagrants below), and John Hall (later of Orleans), no hit singles resulted from this. Perhaps, regardless, the disinterest and discord should surprise no one, in light of that  night's eventual outcome. The Who, full of youthful arrogance and  absolutely determined to make a lasting impact on American rock music fans,  insisted from the get-go that none of the Doors' equipment -- pre-positioned on  stage in the interest of saving time -- would get in their way. Their demands were recognized. The set was vintage Who, an explosive mix of windmilling arms  and twirling microphones. And LOUD. Pete Townshend brandished a candy-apple red  Fender Stratocaster with a white pickguard (ironically his guitar of choice from  1989 to the present, though it is now called by Fender an "Eric Clapton Model,"  and Townshend no longer removes or ignores the whammy bar, at last admitting his  long-disavowed though in fact deepseated admiration for Jimi Hendrix). Keith  Moon played his trademark psychedelic "Pictures of Lily" drumkit. The rotating  stage, however, began to slow due to a mechanical malfunction, and limited by  1968 PA technology, consequently the spiralling sound -- echoing off of the Singer  Bowl's confines --created a bizarre effect for those not directly facing the amplifiers. The songs, in sequence, were as follows: "Heaven And Hell"; "I Can't  Explain"; "Summertime Blues"; "Fortune Teller"; "Tattoo"; "A Quick One (While  He's Away)" [Actually a 'mini-opera' of several interconnected short songs from  their second LP -- the Who had just announced plans to begin recording what  would become 1969's Tommy]; "Magic Bus"; "Shakin' All Over"; and "My  Generation." 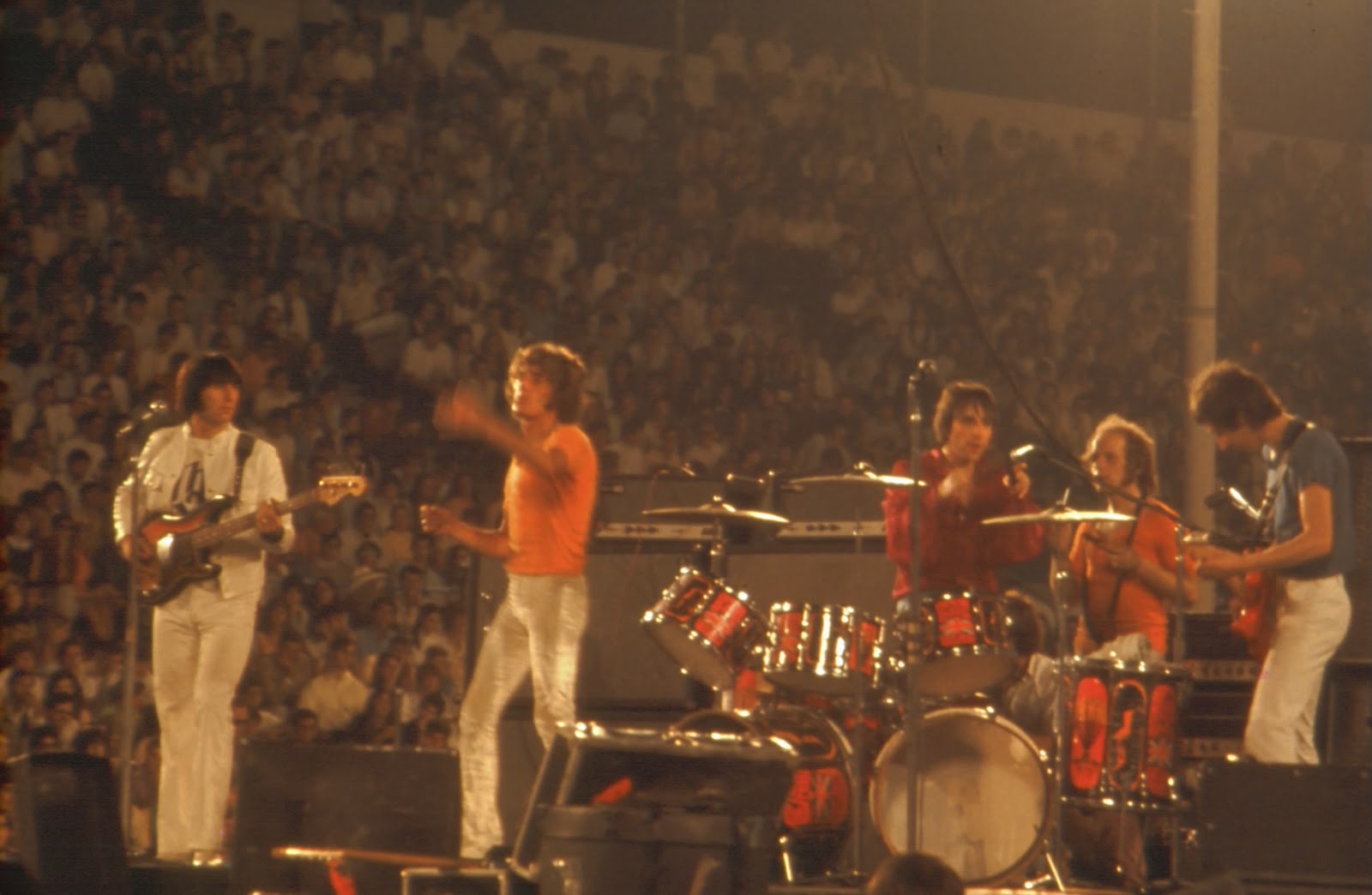 As was customary for them at the time after closing with "My  Generation," Townshend and Moon demolished their instruments. It was well that the Doors had made allowances for the Who's wishes: In spite of having minimized pre-show set-up, some of the Doors equipment nevertheless ended up damaged by the Who's violent extravagances. This in turn caused further delay, ratcheting  up tensions amongst the already penned-up, sweating crowd. For the Who's part,  they exited the stage to join the audience as fans themselves, eager to see what the headliner band -- one of the most popular in America and Europe -- might  have to offer.

From the start, Pete Townshend recalls that he was both  "fascinated and appalled" by the behavior of Doors frontman Jim Morrison.  Reputedly, he punched a fan in the stomach who attempted to get near him while mounting the stage, then stood passively while one of his bodyguards beat  another one up. Morrison was laughing. He was also incredibly intoxicated and in  a mood to cause trouble. For Jim Morrison on this night, the Singer Bowl was the perfect environment. During the entire  performance Morrison repeatedly screamed, yelled obscenities, staggered and fell down, balanced on the edge of the stage and taunted the police. His obvious though unspoken desire was to provoke a full-scale riot, which he easily succeeded in doing.  In addition, the stage finally stopped rotating altogether,  causing a general melee rush to the front in order to see the band. 1968 had  already been a vicious year between the NYPD and the youth counterculture with a  multitude of anti-Vietnam War protests that intensified the ideological divide.  The Singer Bowl came apart. Cops chased hippies into the stands swinging  nightsticks. People began picking up metal chairs and swinging them at each other (Pete Townshend saw a girl near him get clobbered with one, resulting in a  huge cut down the side of her face replete with a freshet of blood. Upon  returning to England after a few more gigs at stateside, as the recording of  Tommy got underway, Townshend penned a song immortalizing the incident and Morrison's performance, which also found it's way into the opera, "Sally  Simpson."). Chaos prevailed. The Doors entire performance, the riot  notwithstanding, was filmed and later edited by Morrison with assistance from a few buddies into Feast of Friends -- today available independently, and as part of the previously released Doors Boxed DVD Set.

At this point, with the Doors' show over, the audience scattered to the four winds, as the riot slowly dissipated into the streets of  Queens. In some instances, the police gave chase. Many people were injured, some  seriously. And the volatile time of the late 1960's marched on. Remarkably, none of that month's future shows at the Singer Bowl were cancelled. Later  performances of the New York Rock Festival included the Jimi Hendrix Experience;  Janis Joplin's first band, Big Brother And the Holding Company; the Rascals (no  longer calling themselves the "Young Rascals"); and the Vagrants (who, while not significant in and of themselves, did have future Mountain guitar legend Leslie  West -- also a future friend of Pete Townshend's who played lead guitar on an  early version of the Who's "Love Ain't For Keeping" available on the CD version  of the Who's Odds & Sods album, released in 1998).

The next and last  time the Doors and the Who would share the same stage would be in 1970 at the Isle of Wight Festival in the U.K.  There, of course, the Who would headline, and  they would both be joined by a myriad of other bands. No close interaction  between these two legendary rock music acts would surpass that of the Singer  Bowl performances. Perhaps because of its much darker outcome the Doors/Who show  of August, 1968, is not held forth in such legendary regard as the Monterey Pop  Festival or Woodstock (though the Who played both shows, while the Doors played  neither -- in the first instance because Jim Morrison had earlier snubbed one of  the promoters, Lou Adler, when he had been an executive at Dunhill Records and had rejected some of the Doors' first demo recordings; in the second because  Morrison had since refused to play any further outdoor concerts). Perhaps it is because the event was only scantly documented in audio and by still photography.  Whatever the reason, this concert certainly deserves more attention from those  of us who remain rabidly connected to the music of that era. That wild summer  night in 1968 was about much more than a riot brought on by a wide variety of  circumstances. In fact, at the very least, it gave birth to a song and a film.  In all, it was the sole unadulterated confluence of, arguably, the two greatest  rock and roll bands to ever come into being. 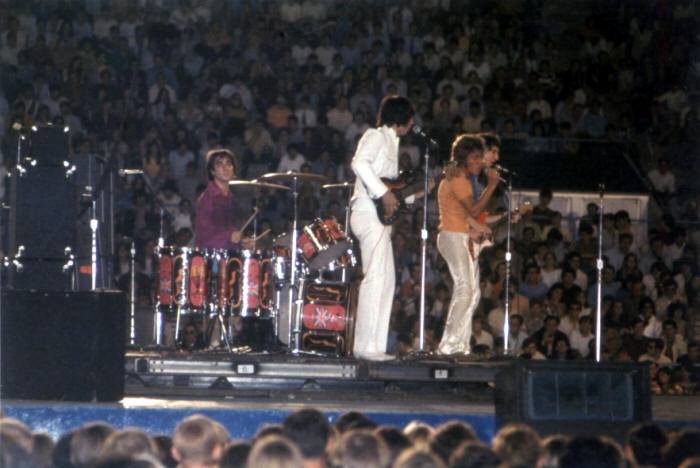