The presidential elections in America have not been about its citizens only for quite some time. The public around the world becomes aligned with one of the two camps and chooses its favorites in accordance with their own interests. After the United States got the first African-American leader, it was expected the next novelty to happen, such as “the first female president”, or “the first time ...” or, well, someone like Trump.

The Americans were not aware of the extent of the euphoria in the small country in southeastern Europe where people anticipated the results of the American elections. In Serbia, the Clintons remained in the traumatic memory for the Serbs (bombing of Yugoslavia in 1999), but they weren’t so keen on supporting the “charismatic” billionaire either.
Under the circumstances, the following situation happened. For days, a distinguished Serbian weekly magazine announced an exclusive interview with presidential candidate Trump. The thing got serious when, in that conversation, Donald apologized to Serbs for NATO intervention. It looked like as if there had been forming something like a brotherhood of the little Russians (Serbs are often called like that in Europe) and Americans, but in the end, it turned out the interview was bogus, set up by the Weekly, by a well-known fraudster. However, the ultranationalists did not pay attention to such things. A man, who was on trial at the International Court of Justice in the Hague, decided that would provide, (with his political comrades), open (and necessary) support for their idol. 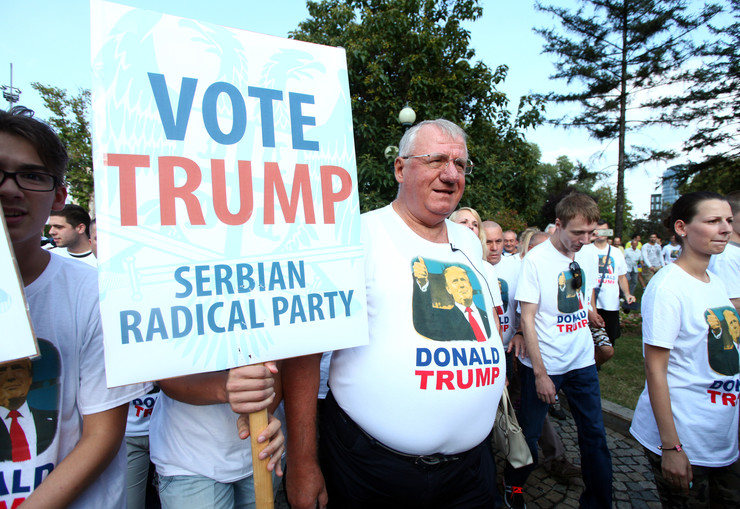 So, it's not just Donald Trump the one who creates controversy while talking, gesticulating, walking ... breathing. At that moment, while he was having a nap in the armchair in the Oval Office, hundreds of clones around the world imitated their leader. That's why the terrible truth remains- after the election of Trump nothing else is a surprise.

Congratulations @peconi! You have completed some achievement on Steemit and have been rewarded with new badge(s) :