Last week, we had the pleasure of meeting up with our friends at a quaint little Japanese restaurant called Sushi Eatery. It's situated at Frith street within London's busy Soho area. 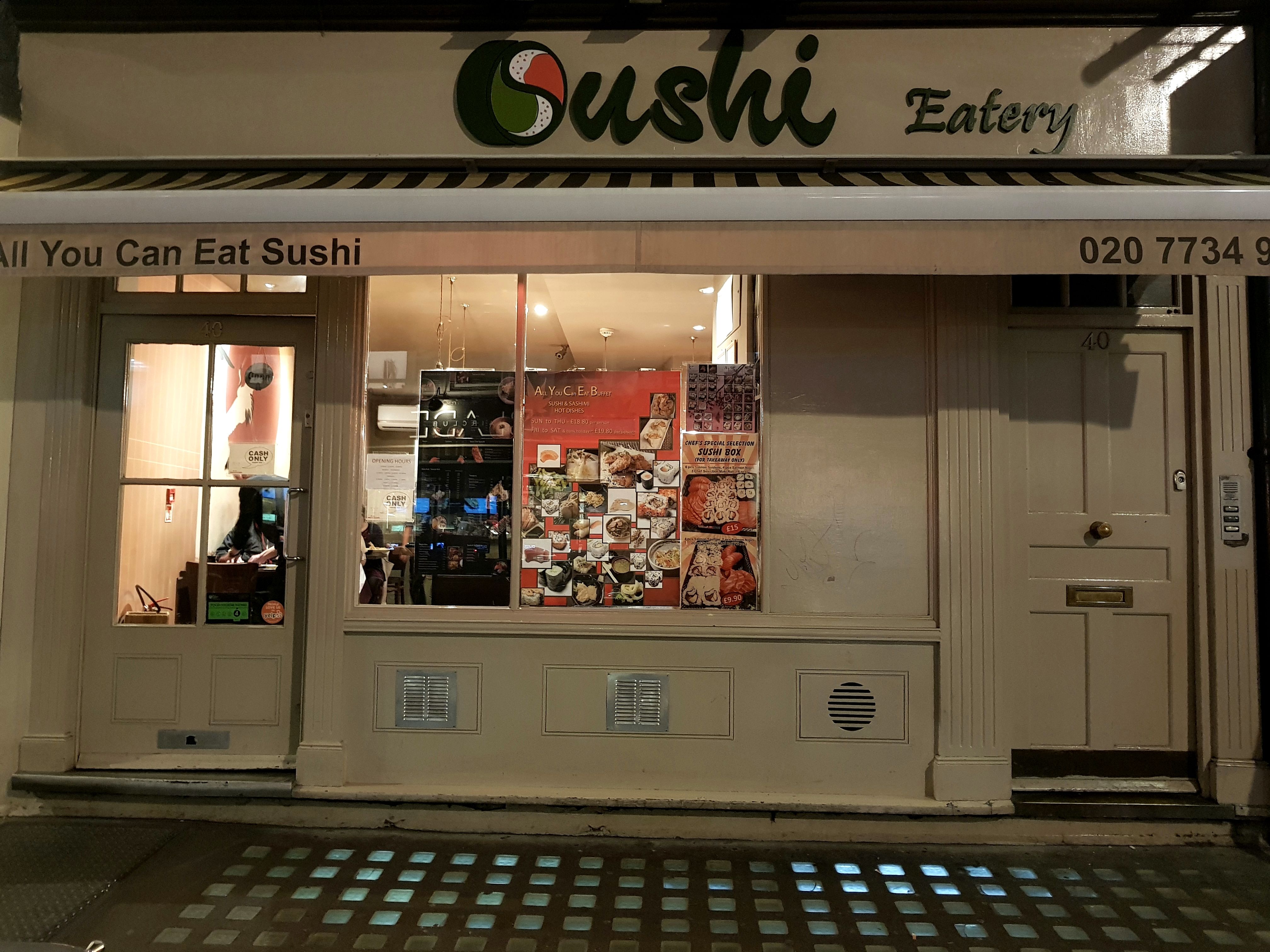 Besides providing sushi meals, they also have a good range of extended Japanese delicacies, like chicken teriyaki, ramens noodles and tempura meat and vegetable.

Our friends recommended us to be there early as there is usually a substantial queue waiting outside the door during peak time. Apparently, this place offers up an affordable “all-you-can-eat” sushi buffet experience with top quality food being served. Hence attracting a sizable crowd every single day of the week. Therefore, it must come as no surprise that I was very excited to find this out for myself, lol.

Upon arrival, the restaurant appeared pretty small but cosy nonetheless. Boasting beautiful, authentic looking Japanese décor, the establishment certainly looked the part. The ground floor is akin to a typical sushi bar with several tables pushed up against along the near side walls. 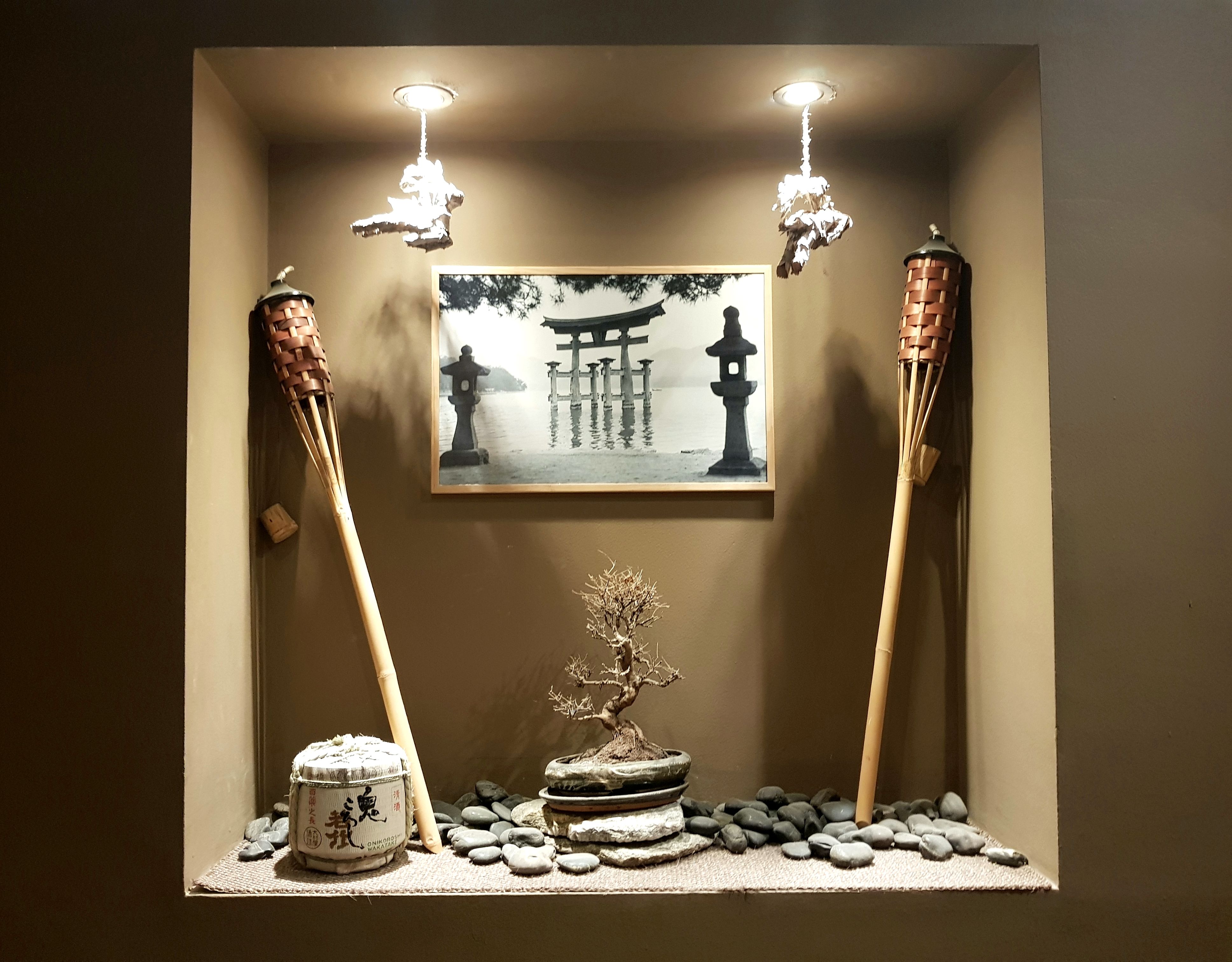 However, as you proceed down a flight of stairs towards the back, a subterranean level reveals itself to be the main dining area of the restaurant. In addition, it features traditional "seiza" seating on the floor. Just as I was getting slightly concerned for my six-foot-two husband, I could see no way in hell he'd remain sitting in the lotus position and dining out for that long, lol. But it quickly came to my attention that there were recessed wells in which to place your legs within under the lowered tables. I assume a complimentary adjustment made for their western customer base. Thank god for that as I'd have had a hard time sitting through it too, haha! 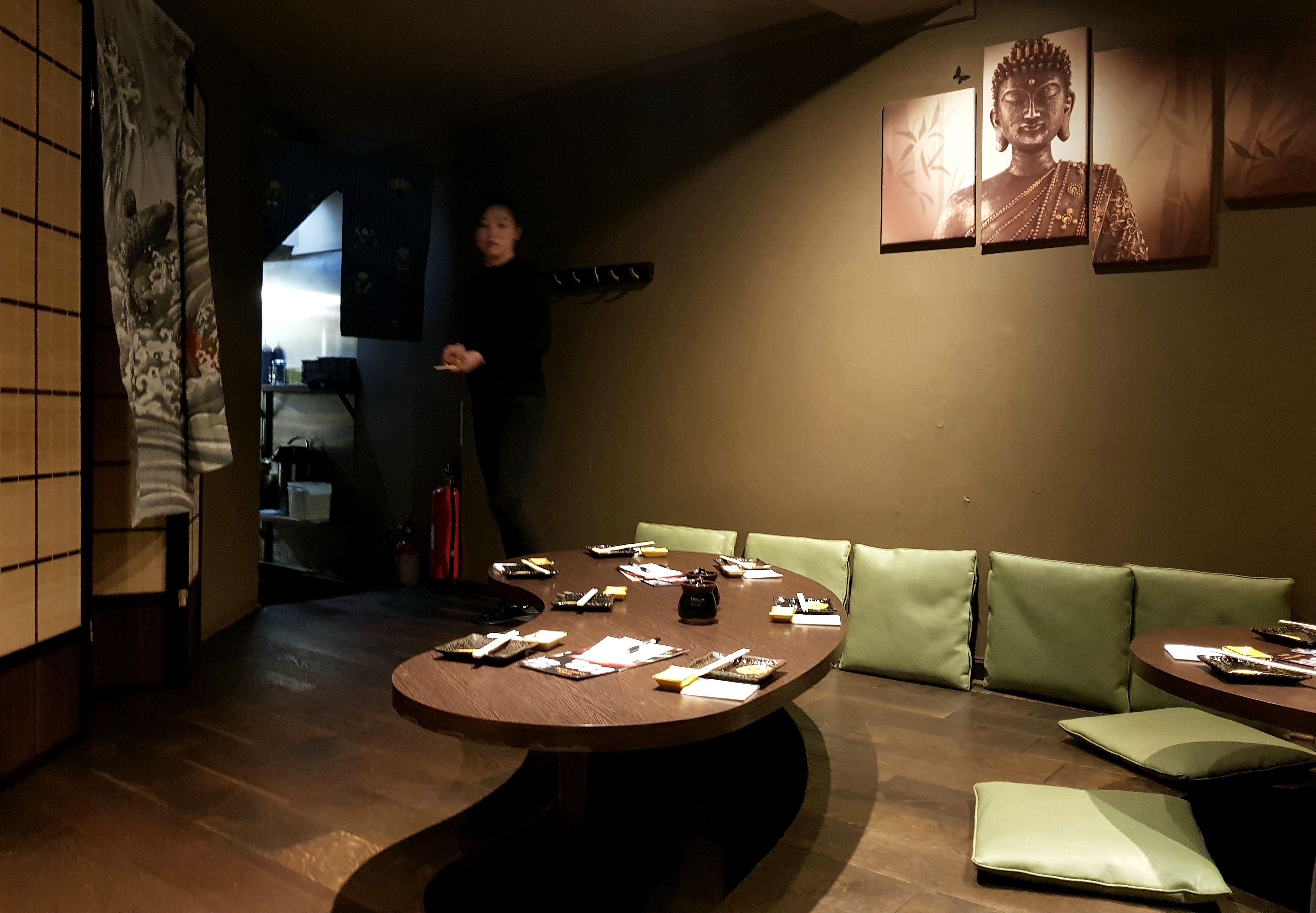 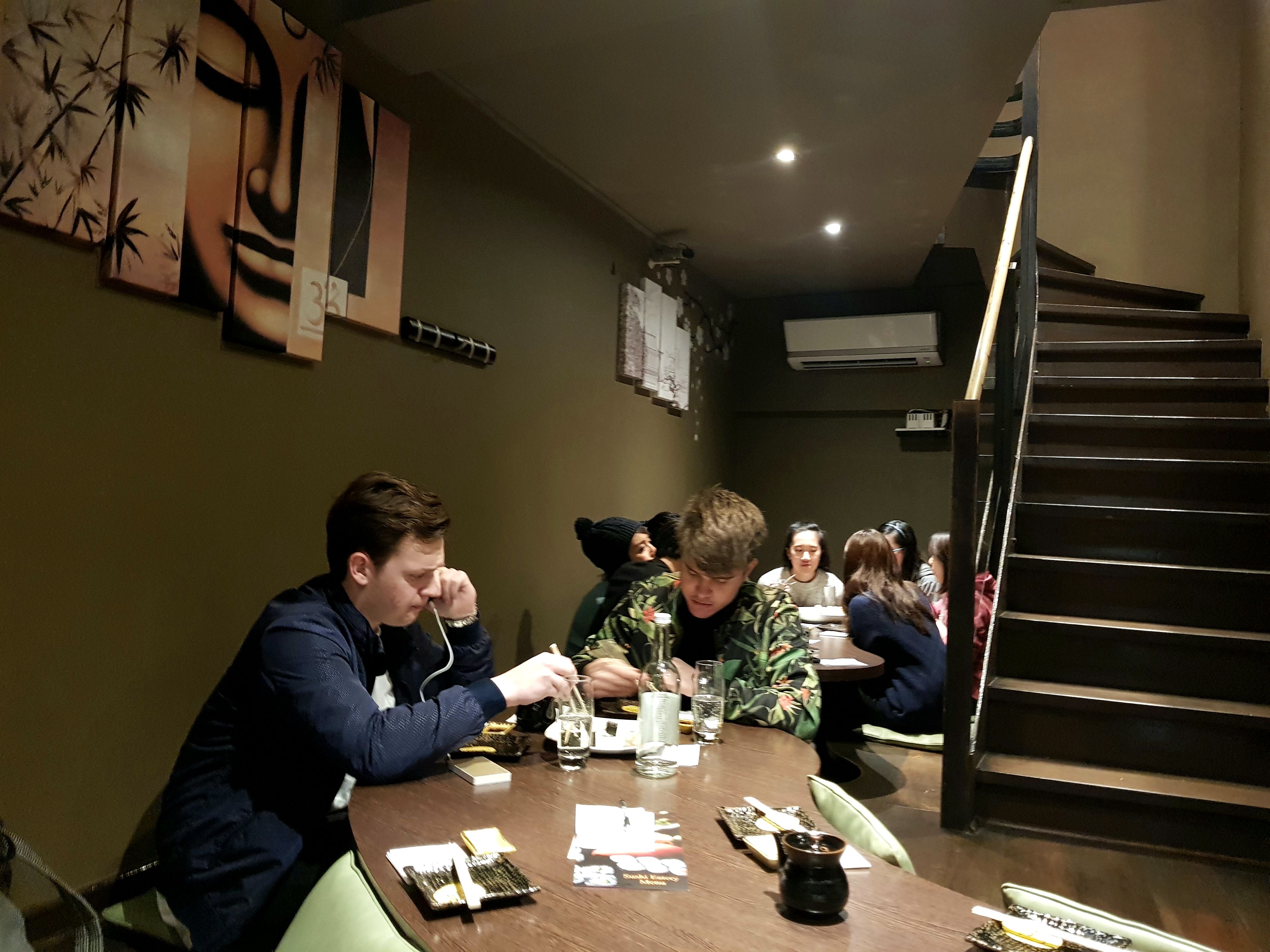 So this is how it works. For a fixed price of £20, you can place orders multiple times. They have two menus presented for you. One contains cooked food from which you can select up to 8 items from, but can only order once. And the other menu is for sushi and other "cold" food from which you can order up to 6 items each time. From here, you can order up to 6 times from this menu. Yes, you heard that right. 6 items, 6 times! 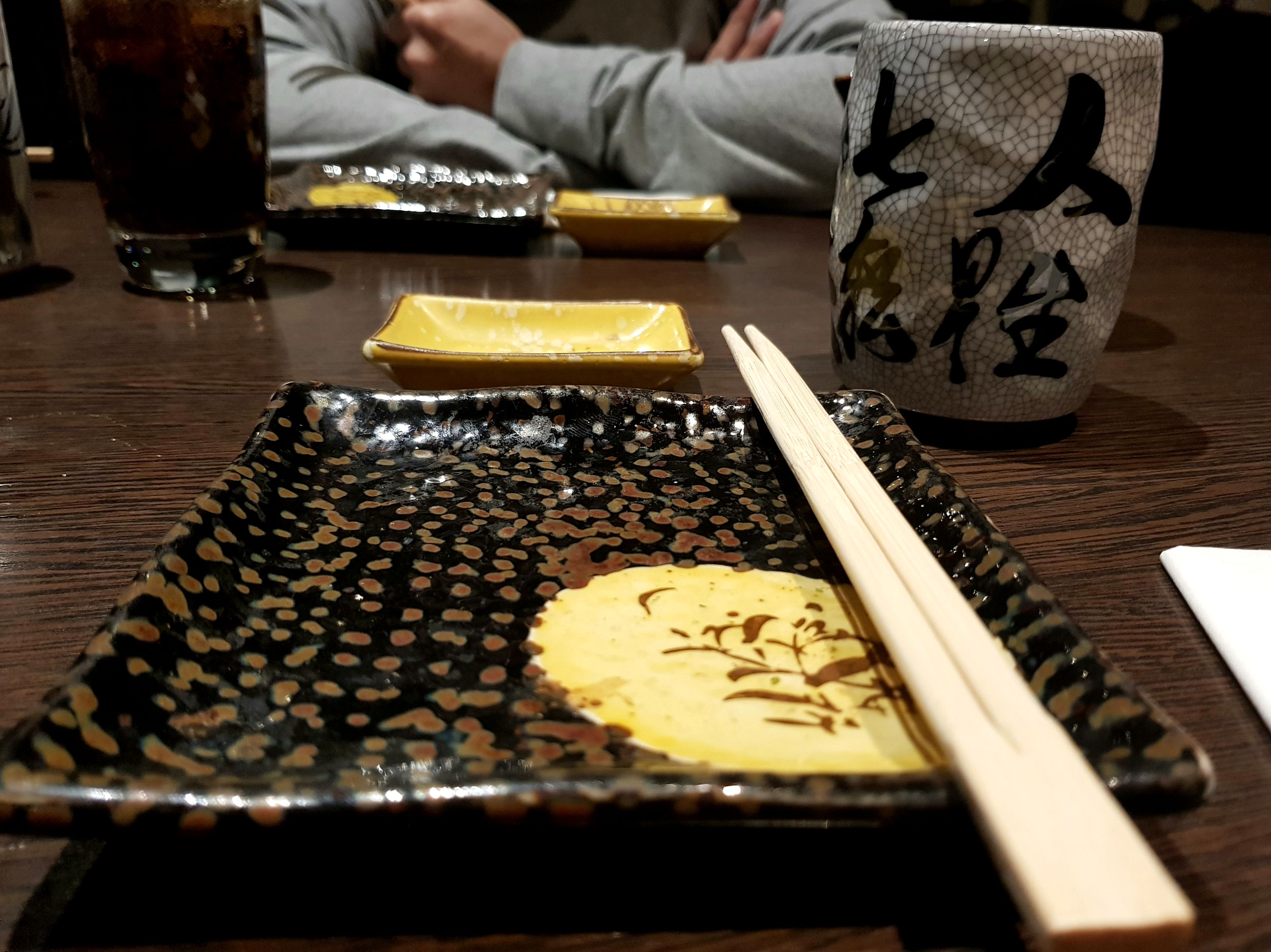 The food was served pretty fast, with everything tasting fresh and quite simply exquisite!

The eight separate hot dishes we selected were delicious, including : king prawn tempura, chicken teriyaki, grill chicken fillet on a skewer, octopus balls, beef teriyaki, chicken gyoza, wasabi calamari and chicken karaage. We also had the mixed salad and green beans on the side.

The chicken teriyaki was my firm favourite from the starting selection. Those chicken thighs were tender and delicious to the bite. It was seriously addictive stuff with that honey orange drenched glaze! The octopus balls were also really yummy, being crispy on the outside and full of flavour and texture encased inside!

On the lesser note, I was a little disappointed in regards to the grilled chicken fillet on a skewer. It seemed to be somewhat over-cooked and too dry. 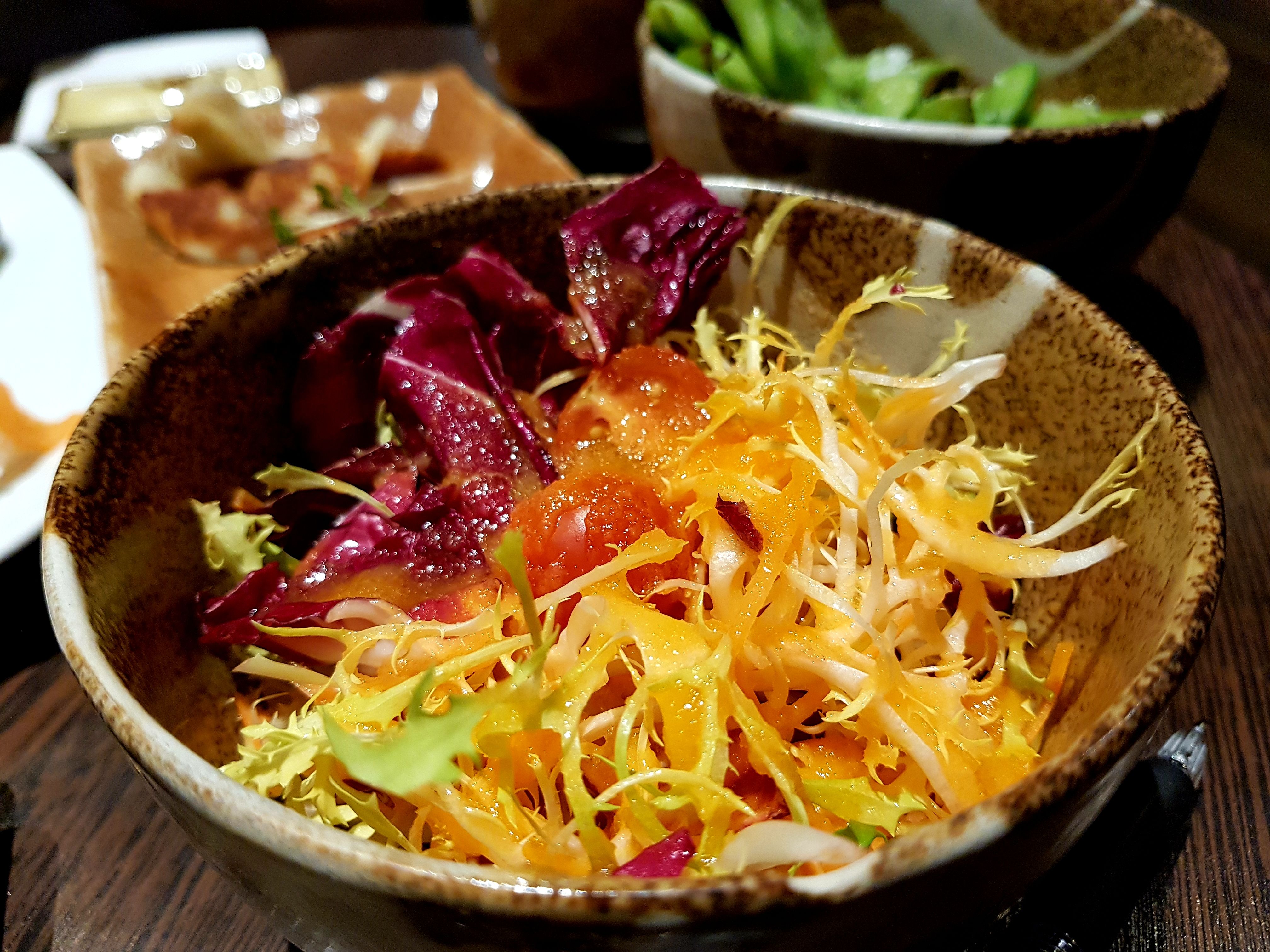 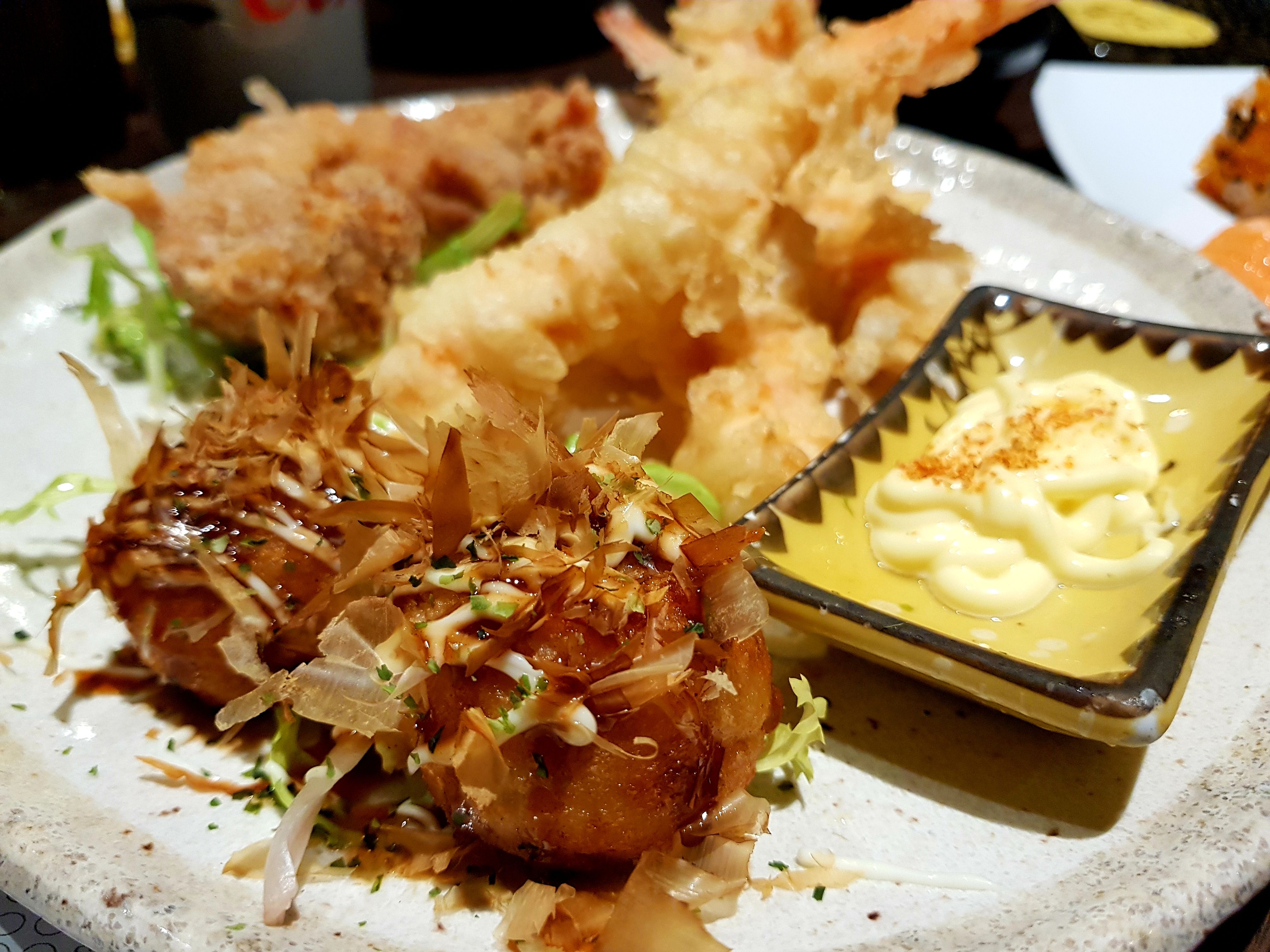 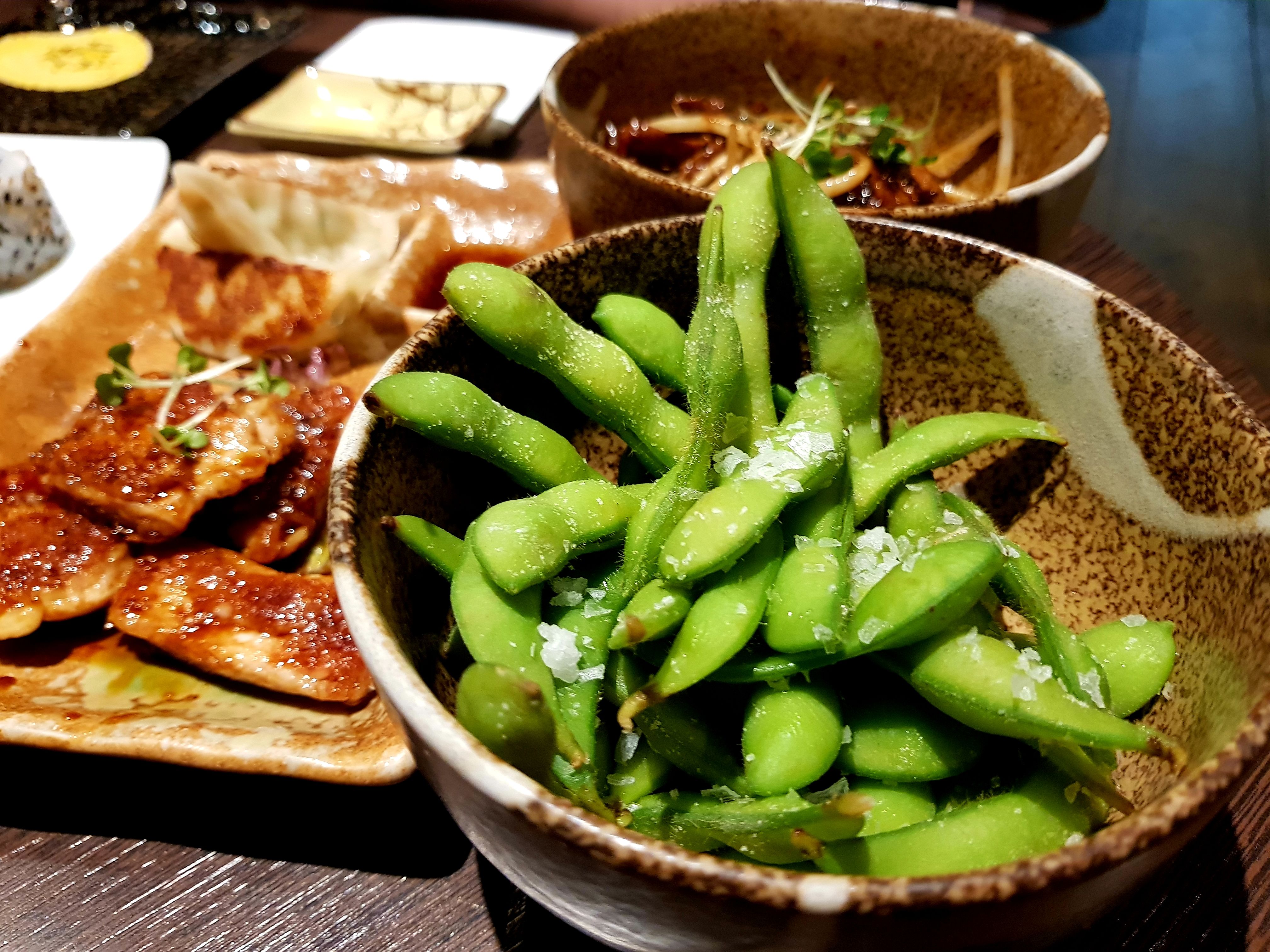 In term of the sushi (which was the main reason for coming here), the selection was quite decent. We ordered several sides of sashimi including salmon, tuna and butterfish, as well as the "sushi set" and maki rolls. Oh my god, the sashimi was so buttery, it felt as though the slices just melted away in my mouth. So flavoursome and heavenly! Everything was so fresh that I'm sure those slippery blighters were swimming in the seas this very morning, haha!

The "salmon skin rolls" were also surprisingly delicious too. They had a very unique and distinctive taste that worked wonders in a standard sushi rice-roll! It was voted as everyone’s favourite of the evening at the dinner table and also comes as a highly nutritious dish to boot! 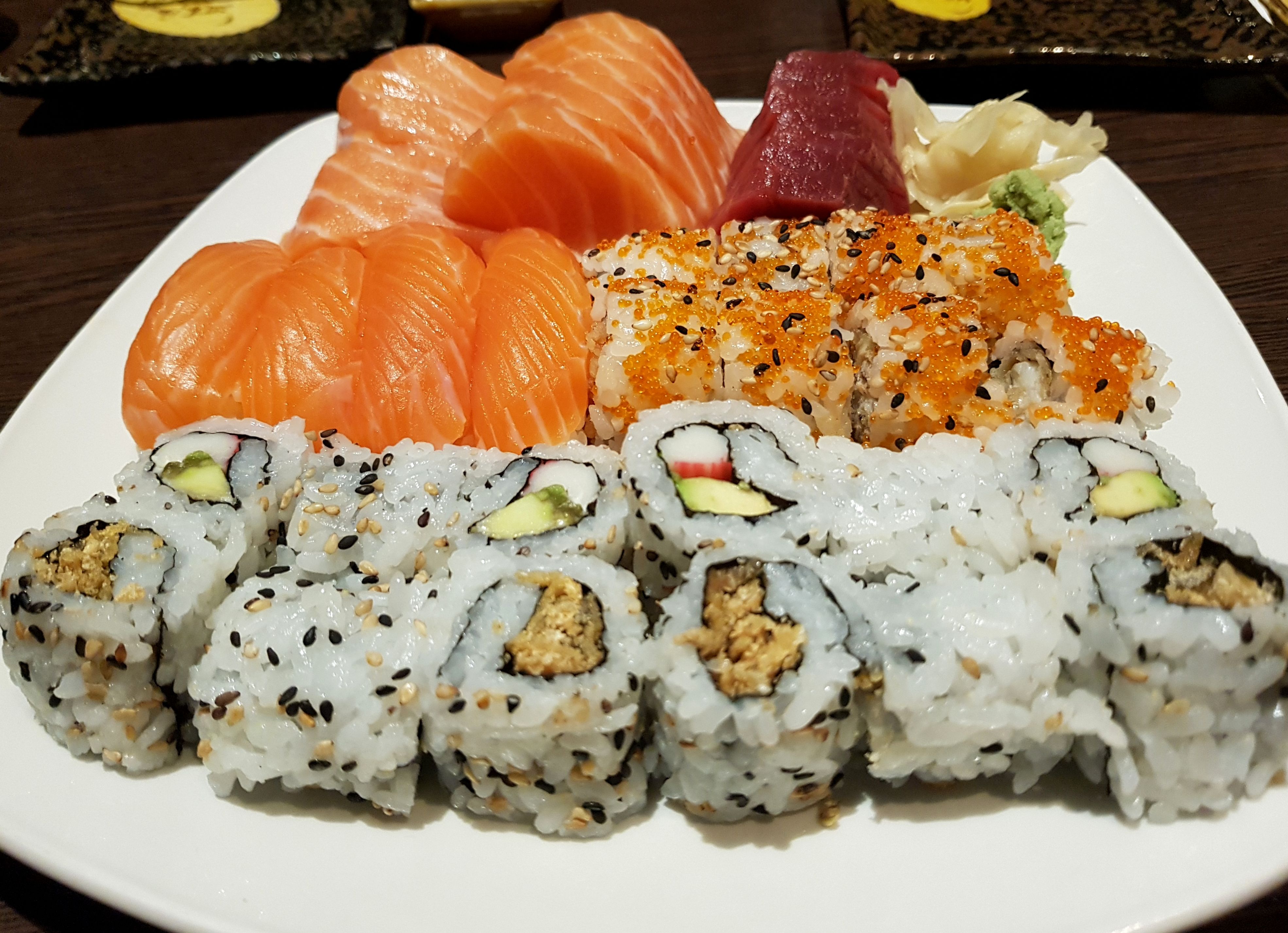 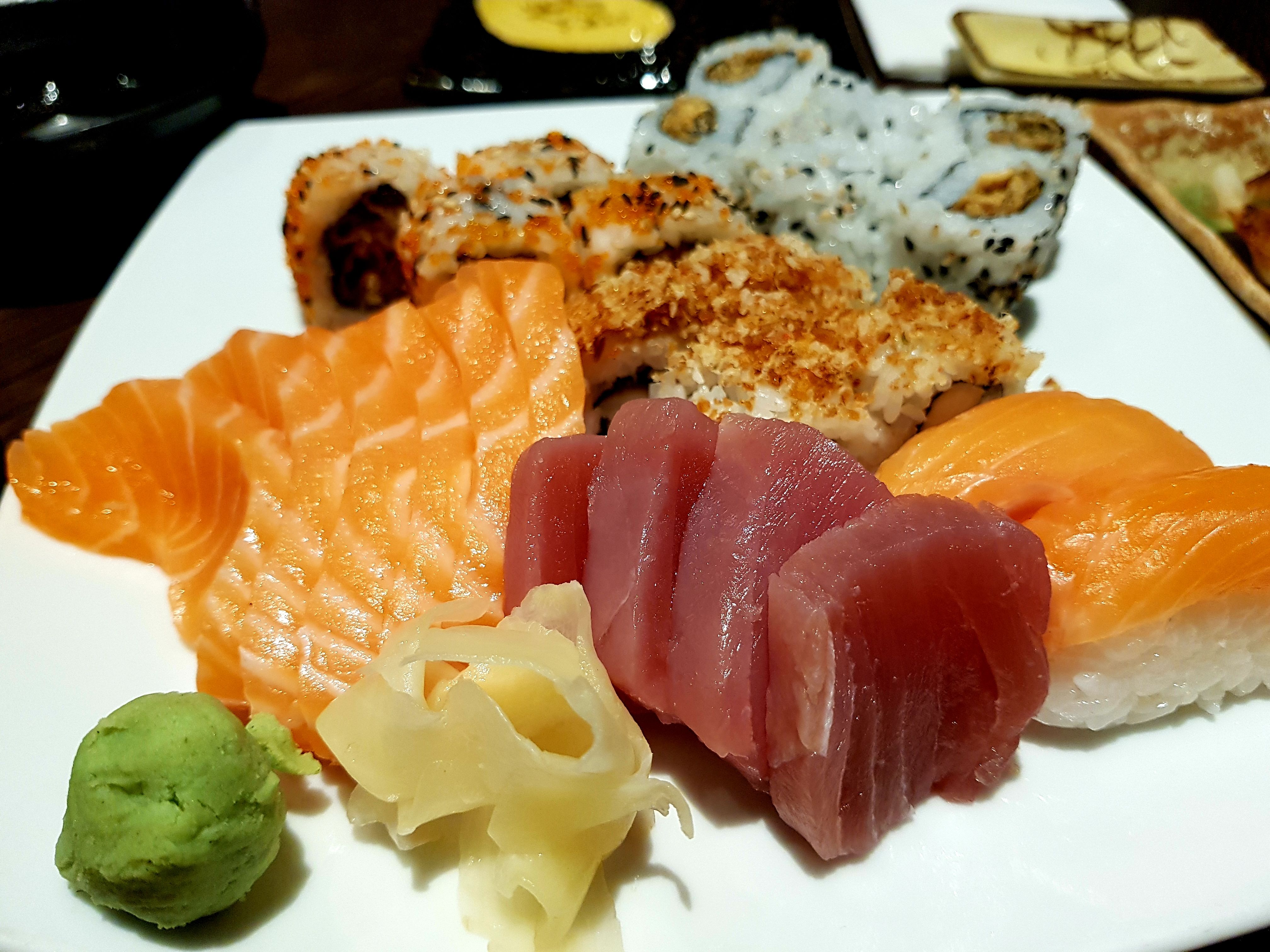 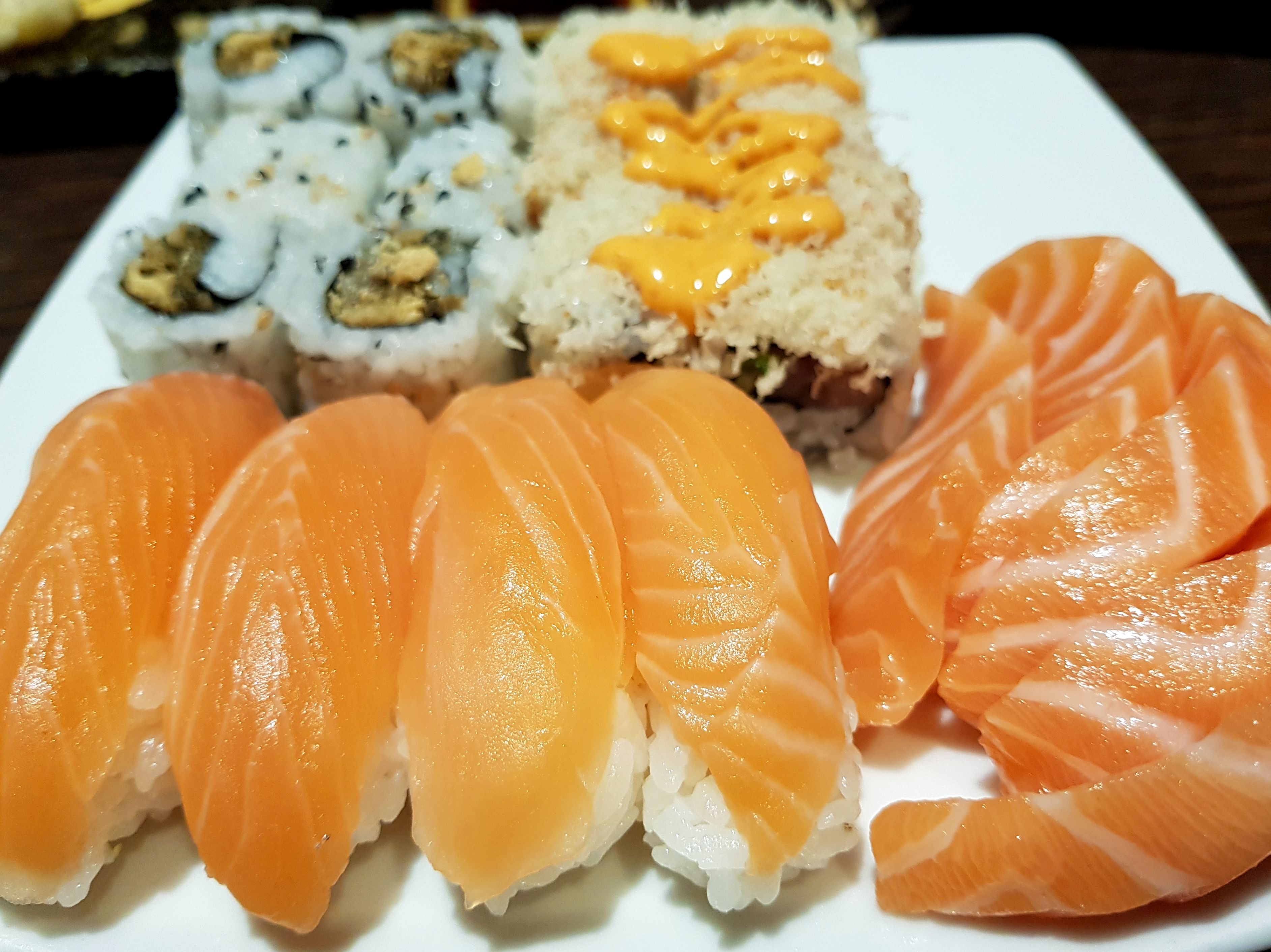 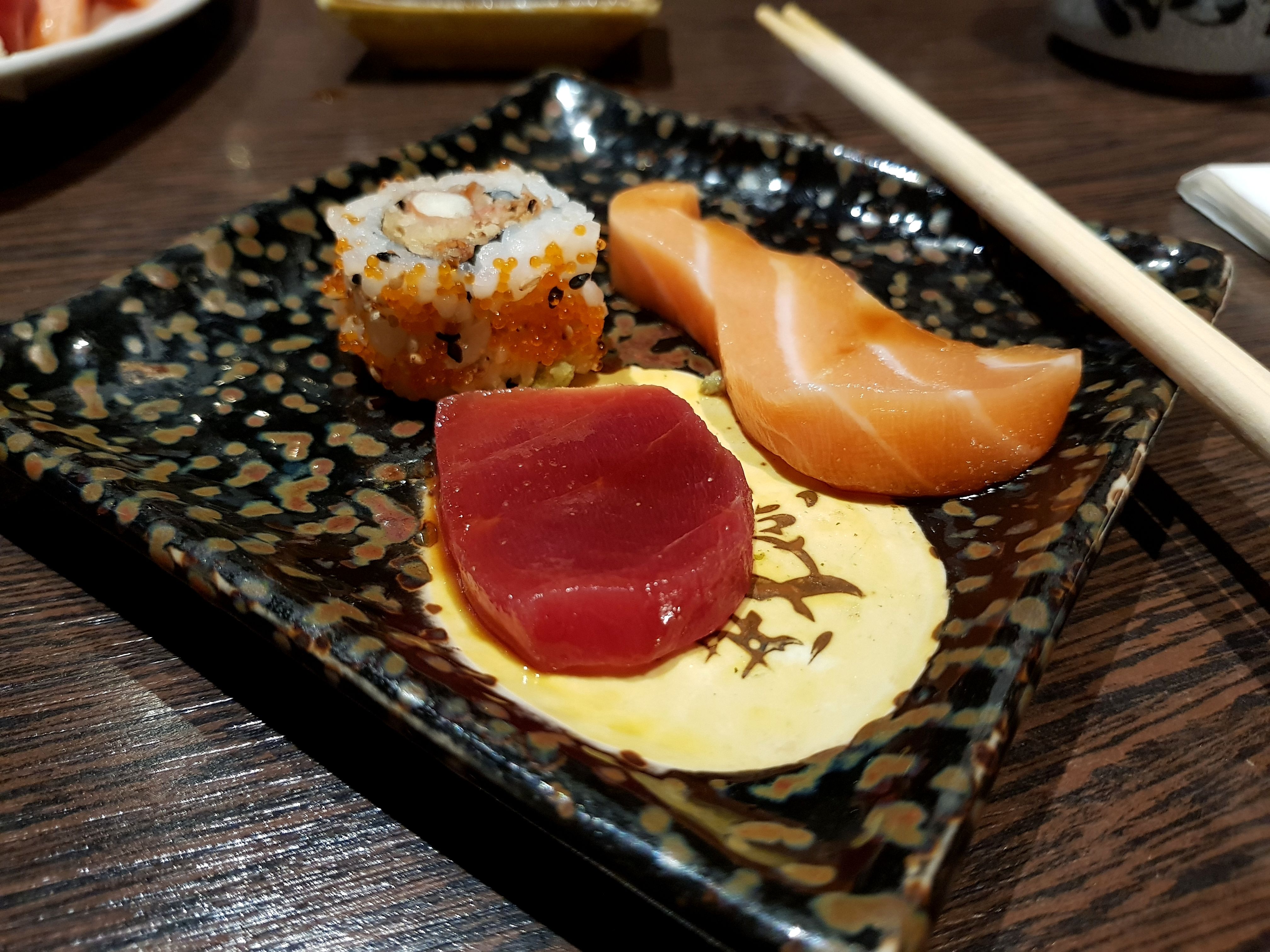 My experience with the staff on duty was pleasant enough although they didn't allow much time between each round. I found them to be a little too “efficient” if you know what I mean! But I guess that's understandable seeing how busy this place can became. Money and time don't mix too well in the best of circumstances.

Although the sushi was not technically “unlimited”, it doesn’t really leave you wanting for more either. Between the four of us, we had 8 hot dishes and as for the sushi, we found ourselves to be full before we even made it to our 3rd round! Well, the boys did try harder and managed a last plate of sashimi between them, to make it to the 4th round, haha!

The “all you can eat” system is great with a mix of hot food and sushi choices. Food quality was well above average, with the fish being of an exceptional standard. £20 set price plus service charge is great value for money for what you get, and situated in a prime location of London. They accept cash only but that’s not much of an issue with an ATM machine just round the corner. I thoroughly enjoyed my experience here at Sushi Eatery and definitely be returning soon for some more aquatic nibbles.

A great post from you! Well done
It looks like a nice restaurant .. The food is amazing, the pictures are good
Thanks for sharing

this is a very delicious food.its to see very yammy and tasty. those style seats before at Japanese style restaurants.i like your food dish. thanks for sharing for good food..i am waiting for your upcoming [email protected]

There are a few around us. This is my personal favourite. :)

@rea Very Nicely Done I am almost Speechless...........I do have two words of commentary though "Octopus Balls" !!!

Some of the best I've ever tasted. :)

Looks great! Wish that had that here in Japan.

Even though I am a vegetarian, these dishes still look tasty to me 😅.
Don’t know why.
May be because its my breakfast time here. Haha

the decoration of this restaurant looks like wow. i think this foods delicious and yummy.

^--- You made this exact same comment at least 35 times in the last 4 hours. View these duplicate comments

OMG that food looks amazing! Great photos! It sounds like you very much enjoyed your experience at this restaurant and the price was very reasonable. We have something similar to this near my house and I love to go there. You are able to order as much food off the menu as you want but only 2 dishes at a time. If you leave excess waste on your plate then they will charge you for the waste of food. This is an effort to not waste too much food and I think it reduces costs for the restaurant somewhat too. Thanks for sharing your experience!
Ivy

It's always so much fun discovering new and exciting eateries down in Central London. I think the idea of not wasting food in the place near you, is not bad at all. :)

The sushi looks so good and I think 20 is a great price! I'v sat in those style seats before at Japanese style restaurants, I wish more places would adapt that style of sitting because I think it's quite fun!

Oh yes, sushi can get very expensive where I live. This place is awesome. :)

I've voted
choose me back my friend.

YUM YUM!
OMG that looks like a great meal!
What I love about Japanese food is how colorful and artistic the dishes are!
The food looks so good you almost don't want to eat it....just kidding... I always want to eat it!!! 😋💛
hahahha

Lol, I know what you mean. The way they lay it all out sets the scene perfectly. But your taste buds override everything else in the end. :)

It's a great deal! We can never finish all six orders. :)

This food has many nices colors and view.

I invite you to follow me and look at my profile ... Thanks for your help;)
https://steemit.com/@tomasbonillo

Wow, @rea I am impressed at the value offered for just 20 pounds in the middle of London. You know how I like to receive good value for my hard earned bucks.

When you said the decor was authentic Japanese I was thinking in my head as I saw the tight quarters - "Yeah, they even imported the size of the place from Tokyo!"

Hello @getonthetrain, who wouldn't love a good bargain, haha! Thanks for dropping by. :)

This all-you-can-eat sushi place has takoyaki on the menu too???

We should check it out together. :)

Congratulations @rea, this post is the ninth most rewarded post (based on pending payouts) in the last 12 hours written by a Superhero or Legend account holder (accounts hold greater than 100 Mega Vests). The total number of posts by Superhero and Legend account holders during this period was 43 and the total pending payments to posts in these categories was $2963.71. To see the full list of highest paid posts across all accounts categories, click here.