This is a fall: bitcoin struggles, because the ripples are falling every month!

Ripples have fallen through the $50 billion area, reaching a monthly low of $1.22. Because $10000 is the psychological threshold for bitcoin investors, Ripple's $1 is also an important threshold, resulting in the price of Ripple has risen 33 times in a few weeks. If the price of Ripple or XRP cannot be maintained at more than $1, the market value of Ripple may be further reduced. 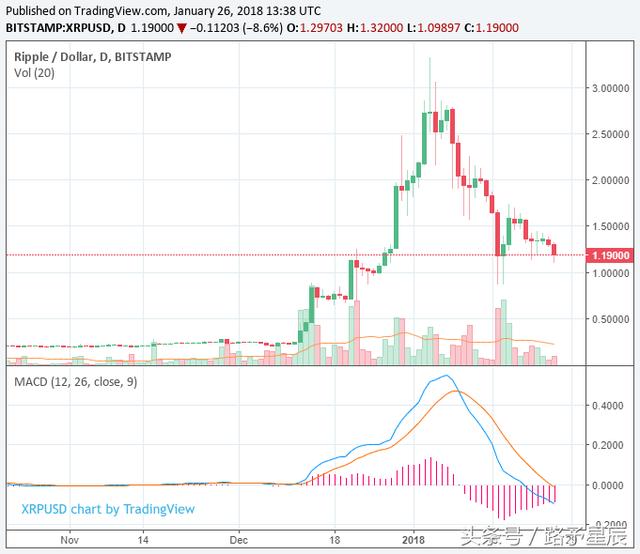 Bitcoin also struggled to maintain the rise in January 25th, as prices fell from $11300 to $10800, down by 5%. The local encrypted currency, Ether and EOS, in the ether square, recorded the lowest declines in the main encrypted currencies, showing a 2% decline in market valuations. However, NEM is the tenth most valuable encrypted currency in the market, and the price has fallen by 16%. The sudden drop in the value of NEM is said to be triggered by a potential security leak in the Japanese leading encrypted currency exchange, CoinCheck.

In January 26th, the Japanese local media announced that the CoinCheck was completely withdrawn and failed due to suspicious transactions. Unconfirmed reports claimed that it was not clear whether a group of users or hackers stole NEM from an exchange from the exchange of $500 million worth of NEM from CoinCheck.

The encrypted currency community is eagerly looking forward to the official statement of CoinCheck, but up to now, there has been no confirmation that the exchange has been hacked.

A sudden inflow of $500 million from the Japanese encrypt currency exchange could also lead to a decline in the market. Some investors believe that another factor may be that CME group closes the future contract of bitcoin. Institutional investors sell lots of bitcoins and deliberately reduce the price of the currency to fulfill the short contract.

Bitcoin and whale sell digital currency to cash in short-term contracts, which may lead to the decline of bitcoin market, and bitcoin is considered to be the reserve currency of the market, so the rest of the world's encrypted money market is going down.