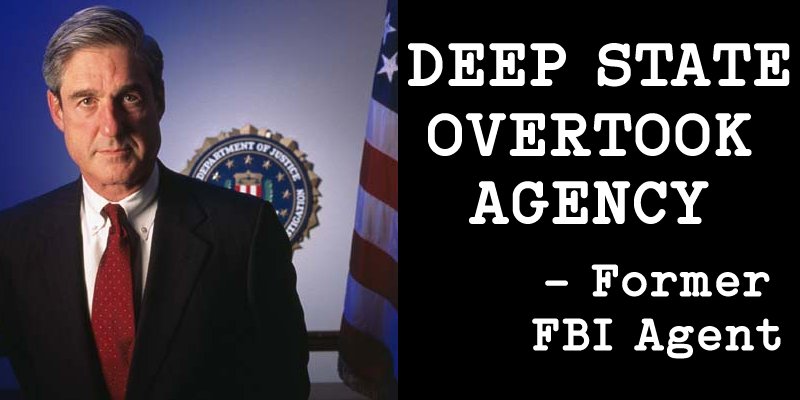 According to a former FBI agent who retired in 2007, Robert Mueller (Director of the FBI from Sept. 4, 2001 to Sept. 4, 2013) enabled the Deep State to get rid of the mid- and upper- management ranks of the agency who were loyal to the Constitution.

While this FBI agent, most understandably, wishes to remain anonymous, I have every reason to believe he is a genuine source, as the content of this letter was recently (Feb. 16, 2018) divulged in a broadcast by Greg Hunter from USAWatchdog.com.

I consider Greg Hunter to be an honest and upright journalist and patriot who has a reputation and track record of properly vetting his sources.

Moreover, one needn’t look long at Mueller’s history of treason and corruption to infer that he is indeed a swamp creature from the Deep State (more on this below).

For now though, let’s have a look at the revealing statements made by this former FBI agent:

Just after the 3:47 mark in the video (contents of letter starts at the 4:18 mark up until around the 8 minute mark):

---START OF LETTER---
I spent twenty-four years in the FBI as a special agent and supervisor. I retired in 2007 at which time the fissures within the FBI were becoming more and more apparent.

There was a distinct dividing line between the old FBI agents whose fealty lies with the Constitution and the American people and the new line of agents whose fealty was with Director Mueller and what has been revealed with time to be The Deep State.

The reason I retired was Mueller’s ‘5-Year-Up-or-Out’ policy adapted to remove senior FBI supervisors loyal to the Constitution from the ranks of the FBI management.

The policy, simply stated, required anyone who held a Supervisory Special Agent (SSA) position for more than five years to return to FBI HQ, or be forced out of management.

Prior to Mueller, all field supervisors were required to spend seven to ten years as successful street agents and then spend three to five years as SSAs at FBI Headquarters then become SSAs in the field to become a SSA Division 6 – that’s a criminal investigation division. As a street agent you were required to have successfully taken several cases through trial to have been a case agent on undercover operations with positive results, convictions, and preferably have served as an undercover agent before you could even apply for an SSA position at FBI Headquarters.

This policy guaranteed that agents applying for SSA were battle-tested and experienced, accomplished and hard-working men and women admired by their peers.

Needless to say, most experienced SSAs stepped down and retired rather than return to the morass of FBI HQ.

In my opinion, this is how the Deep State got a foot in the door at the FBI during the Obama administration and of the FBI SSAs.

The FBI SSAs achieve their position through merit had been forced from their positions under the ‘5-Year-Up-or-Out’ plan. This allowed the Deep State to take over middle management whose ranks became upper management.
---END OF LETTER---

Although there now appears to be many in the upper ranks of the FBI who do seem to fit the profile as described by its former agent’s letter above, a quintessential example of one such conspirator certainly is Aaron Rouse, a section chief in the counterintelligence Division at FBI Headquarters appointed by none other than James Comey – the former Traitor-in-Chief of the FBI in July of 2016. 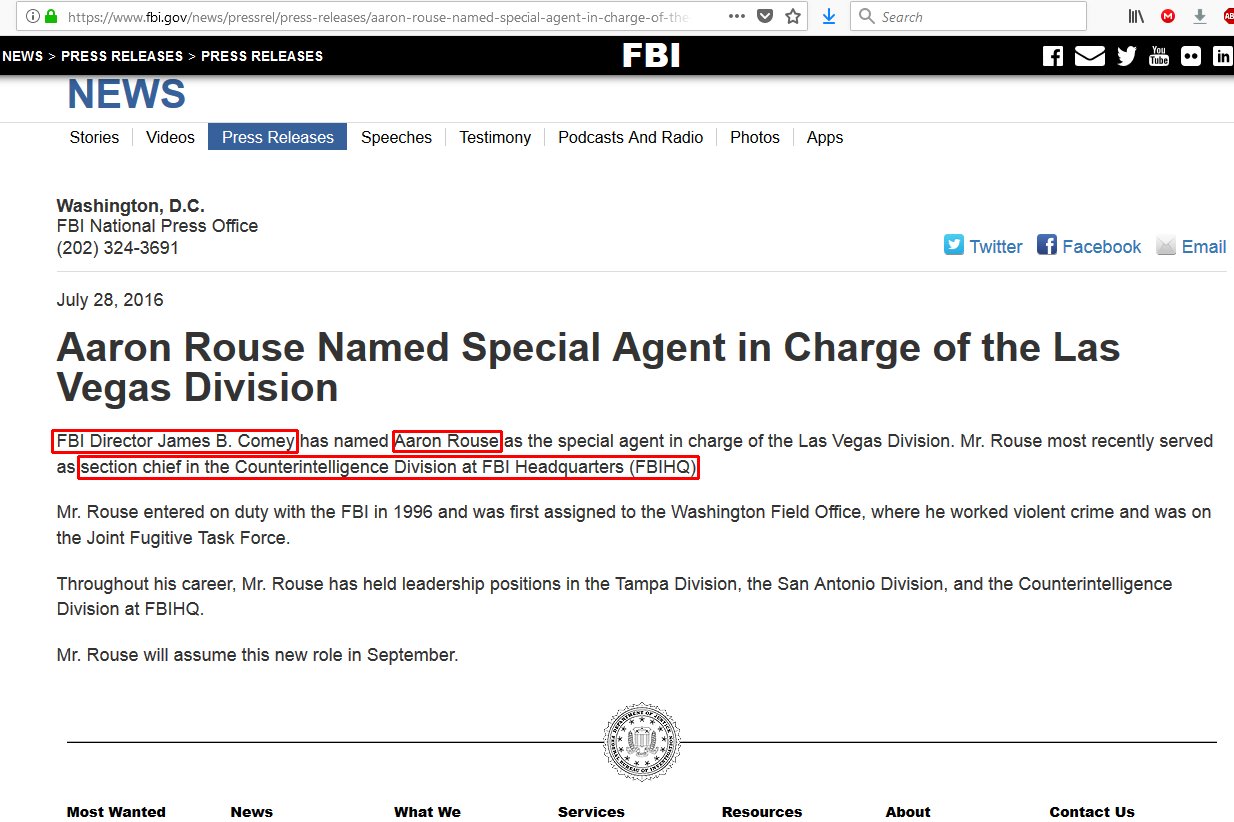 Interestingly, Aaron Rouse is the Special Agent in Charge of the Las Vegas Division and overseer of the 2017 Las Vegas shooting – the deadliest mass shooting in modern US history. The Contact information for the FBI Field Office in Las Vegas, accessed Feb. 17, 2018

While there is little doubt that the official narrative of the Las Vegas mass shooting incident is full of lies, omissions, and deceits, what makes this moment in United States history particularly sour is the fact that Rouse was put in place to further deceive the public and shield them from the truth about the incident – which is considered to be, without a doubt, a false flag operation.

The leading expert in the world regarding false flag incidents is Mr. Ole Dammegard who has spent over 35 years of his life investigating global conspiracies, including the assassination of US President John F. Kennedy, considers the Las Vegas shooting a definite, yet complex, false flag incident.

The following lengthy and detailed video interview lays out how the Vegas shooting was textbook modus operandi of the Deep State operatives.

Another long time citizen journalist – Sean from SGTreport, offers a spectacular glance into the particularly stomach-turning reality about how law enforcement at the local level in the United States can become totally usurped by Deep State operatives such as FBI Special Agent Aaron Rouse.

Watch how Clark County Sheriff Joe Lombardo delivers a press conference about the shooting and is forced to stay on script under that very intimidating watchful eye of his FBI handler Aaron Rouse; but first, here are a few images whereby you can get a taste of the kind of evil those in the Deep State like to place in their positions of power: 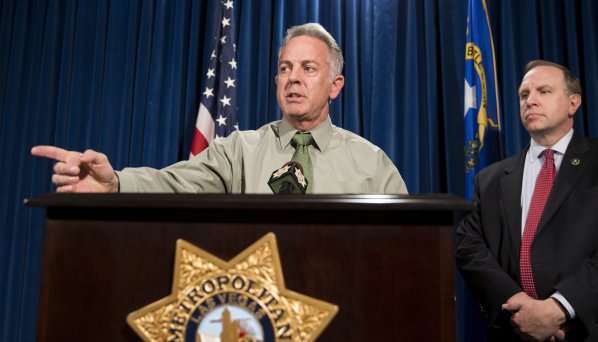 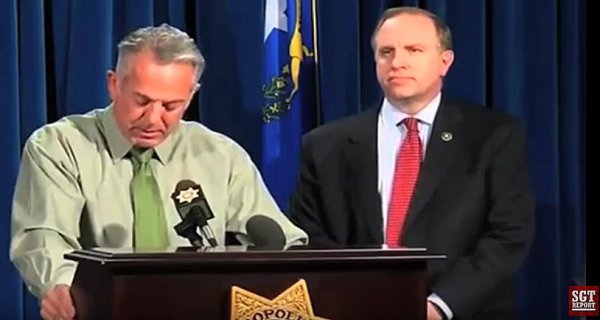 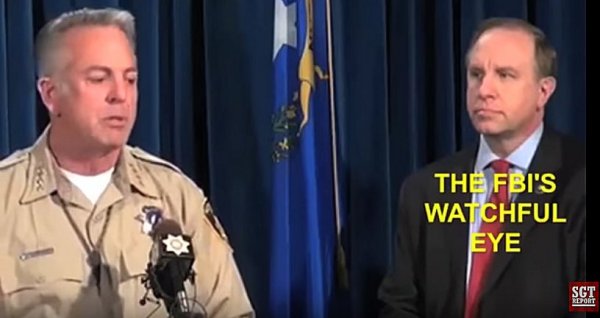 Now for the video itself:

YouTuber Jake Morphonios has been one of several citizen journalists who has investigated the Las Vegas Shooting in situ (at the scene of the crime). Morphonios himself has in excess of sixty or so videos on the Las Vegas shooting alone. In them you will find top notch investigative journalism and analysis with hundreds of contradictions to the official narrative offered by the Las Vegas Police Department that is in charge, of course under the watchful eye of the FBI, of the investigation.

Now, we all know that Robert Mueller was specially appointed last May as Special Counsel to investigate Trump in the so-called Russian collusion and meddling of the 2016 US Presidential Election. One can easily speculate as to why Mueller, in particular, was chosen for this unenviable task. But I digress and will leave that up to you.

Countless articles have been written on the subject of Mueller’s appointment and its political ramifications. Nevertheless, I’d like to highlight just a few of them that offer particularly revealing insights as to the nefarious nature of the head of this special counsel.

This particular former FBI agent who has revealed how the agency has been compromised by members of the Deep State is only one of many who have done so.

I say to this:

I’m sorry, but my stance is that if you are in an agency that is supposed to uphold the law of the land and the Constitution and serve the great people of the United States, took an oath to that effect, and you are standing idly by while irreparable damage is being done, then you are part of the problem. So get the hell out of the agency. Quit. Retire. GTFO! You are NOT WORTHY OF YOUR POSITION.

If you are the 99% and outnumber the bad guys who are the mere 1% of the agency, then shouldn’t you have the courage and the balls (female agents included!) to get off your lazy asses, use your supposed intelligence, and make it happen?

For the rest of us, unless we ACT on this, were are just as culpable. Isn’t time to take the power back from the Deep State and give it back to the People?

In Truth and Liberty,

UPDATE (2018-02-18): Greg Hunter from USAWatchdog.com has now published the full letter. Please note that I had initially transcribed only the portions of the letter that were verbally read aloud by Greg Hunter during his broadcast; consequently some parts were omitted and the way I have formatted the text (esp. paragraph spacing) appears different as well.

Regarding your conclusion: That is one of the reasons I retired, as a contractor, working for the government. It is definitely a different environment from when I started my career.

Sounds like middle- and upper-level FBI has become "the brass." If you've been a regular cop, you'll know exactly what I mean.

EDIT: From the James Bovard article -

Mueller took over the FBI one week before the 9/11 attacks and he was worse than clueless after 9/11. On Sept. 14, 2011, Mueller declared, “Thefact that there were a number of individuals that happened to have received training at flight schools here is news, quite obviously. If we had understood that to be the case, we would have — perhaps one could have averted this.” Three days later, Mueller announced: “There were no warning signs that I’m aware of that would indicate this type of operation in the country.”...

The Bush administration suppressed until the following May the news that FBI agents in Phoenix and Minneapolis had warned FBI headquarters of suspicious Arabs in flight training programs prior to 9/11. A House-Senate Joint Intelligence Committee analysis concluded that FBI incompetence and negligence “contributed to the United States becoming, in effect, a sanctuary for radical terrorists.” FBI blundering spurred the Wall Street Journal to call for Mueller’s resignation, while a New York Times headline warned: “Lawmakers Say Misstatements Cloud F.B.I. Chief's Credibility.”...

So he failed upwards. Great!

A great read, and one I have added to my research library

One note that I'll add is that Mueller had left Justice earlier in his career, and when he returned, he relied on Eric Holder to get him back into government (Kessler, Secrets of the FBI)

I've followed you, and I'll recommend that you change the aaron-ruse tag to #informationwar...

we run a curation service (@informationwar) looking for stories, and this one certainly fits!

Thanks again for a great contribution!

"fissures"
this story sounds entirely likely and explains so much, awesome post. in the end it does not even matter if the shootings and such the FBI allowed were the result of incompetence or malice the effect is the same and the fault lies with Mueller and his cronies and enablers.

Congratulations @libertyacademy! You have completed some achievement on Steemit and have been rewarded with new badge(s) :