Three Buddha near Gwan Chock Sa and The Reason

The interest thing is The Great tone Maitreya statue could be found mainly in the area of ChungCheong Do where was the central area of BaekJae Dynasty.

Below are Buddhas I took the photos 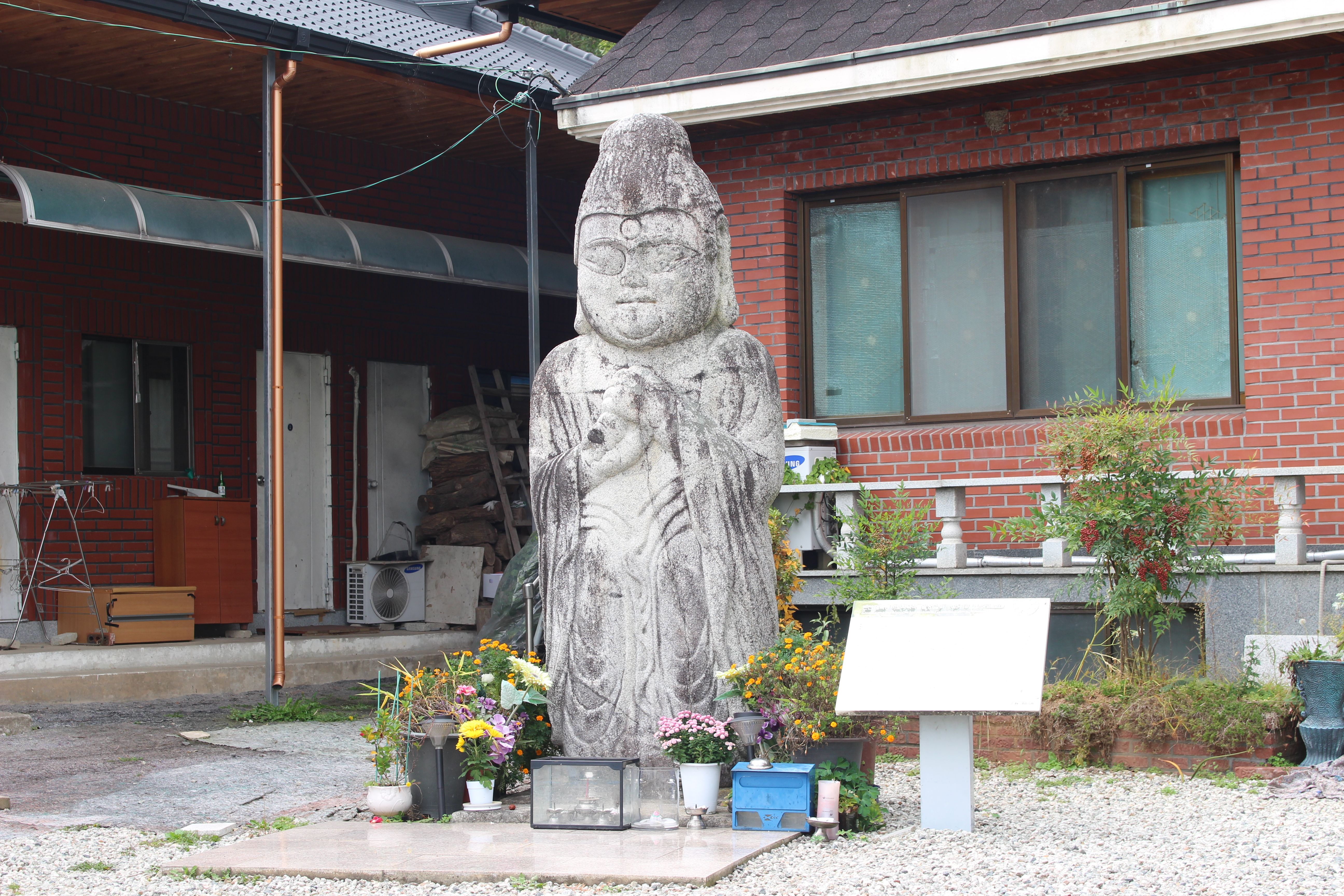 This statue was located in a private house. 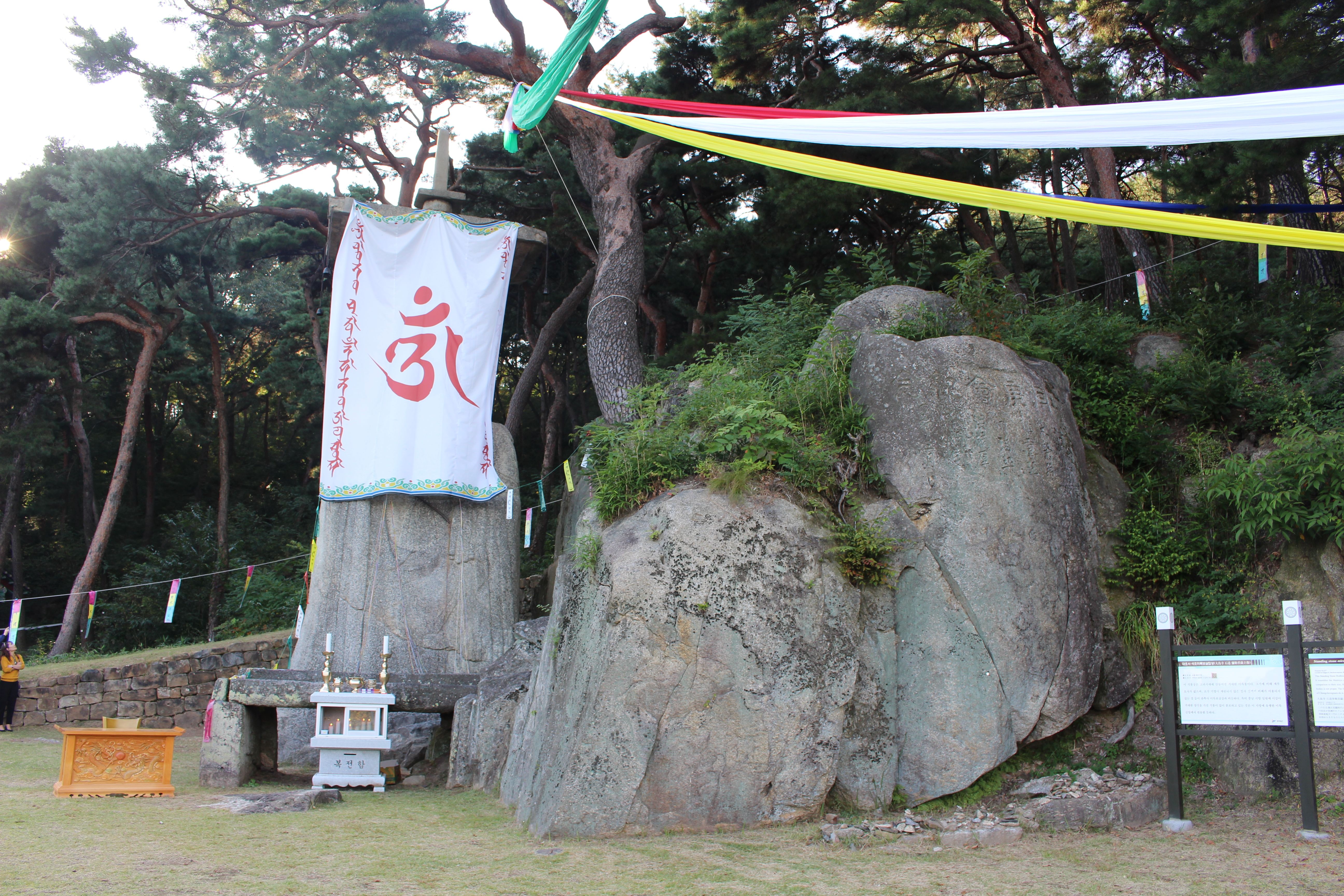 Making these big stone statues was possible only with direct support from Government at that times. Then why Koryeo kingdom had concentrated in building such Big Stone Statues in this area.

In my guess, it’s because that the Koryeo Kingdom had tried to get people’s support in this area.

There was serious chaos and struggling during creating Koryeo Dynasty. During this process, the strong political power had been formed in this area. That power had competed for several years for domination of political power in Korean Peninsular.
This power named itself of ‘Late BaekJae Kingdom’.

The political power known of Koryeo kingdom which was in the basis of GaeSung defeated ‘Late BaekJae’.
Finally Koryeo Kingdom unified Korean Peninsular.

So the most important and urgent work in Koryeo Kingdom was turning people’s mind to them. In my opinion that was the reason the big stone statue was built mainly in this area with strong support from government.

Especially at that time, the worship for Maitreya was very strong and powerful among people. I could not find any other explanations or interpretations relating to the reason of building Maitreya statues having been concerntrated in this area.

Thank you so much for reading.

Hello, i just want to ask if i can get your vote for witness, if you need anything please let me know thank.

What a great spot thanks for sharing

It's interesting that Buddha forbade making images of him but the peoples' need to be like other cultures prevailed. At first, statues were carved out of images of Greek gods which gave them a more westernized appearance, but gradually the distinctive Chinese and Korean depictions emerged.

I think the Buddha images were made for the purposes of the rulers as you suggest.

In my guess, people made Buddha statue for an explanation of Buddhist world in the basis of ontology.

Oh, that would be really interesting, @slowwalker

These stone statues of Buddha are beautiful ..Korea has amazing culture indeed

I really love the old statues, makes me wonder what the looked like new, if they were less worn out etc

Thank you this was very helpful! 😀

Asian culture is so fascinating!
There is a lot of historical value, I hope one day I will be able to visit these places 😁

Welcome to Korea, at anytime

good luck to you

As usual so many great info concerning the history of your country in your post man! Wow! You seem to know a lot about these times!
That's great!

Let me take a selfie with that statue! <3

Thank you so much for sharing
i like it

Thank you for sharing history. You explained very well. So we are very easy to read and understand. Thank you @slowwalker

$0.00
Reply
[-]
nejc1107 (50) 4 years ago (edited)
I have always been fascinated by Buddha and the spiritual philosophy behind it :) great post bro @slowwalker you are walking slowly but consistent hehe keep up the good work ma man :)!

I make design for you sir @slowwalker
https://steemit.com/art/@arie.steem/slowwalker-my-appreciation-design-2
By the way, thank for your support sir 😊

I liked how you are not just illustrating your pictures here but also tried to narrate the history and story behind these pictures. will follow you for more 👍

oh there is a reason behind this, nice.

oh that's really incredible thanks for sharing about this place

Great job! Thank you @slowwalker for your story. You have shown exciting places and gave me the pleasure of your photos! Have a good weekend! There is so much common in Indian other East Asian cultures - as an Indian, I am proud that we the birthplace of the Siddhartha and where the Dalai Lama resides.

Thanks for the post that was really interesting.
you have my upvote
Keep smiling, reading, writing and voting!!!
@mannyfig1956

Politics and religion have always exercised their power with these symbols. Especially in the regions on the periphery. ...

right. that is our life

Congratulations @slowwalker, this post is the third most rewarded post (based on pending payouts) in the last 12 hours written by a Superhero or Legend account holder (accounts hold greater than 100 Mega Vests). The total number of posts by Superhero and Legend account holders during this period was 24 and the total pending payments to posts in these categories was $1407.58. To see the full list of highest paid posts across all accounts categories, click here.

thanks for you too, comrade help me to join my friend's blog.

The only reason for time is so that everything doesn't happen at once.

Quite interesting thing is that one buddha you uploaded is located in the private house... so it is not easy to enter that place, right? Sometimes I'm surprised that how those buddhas have still remained after Korean war.

the pictures in your post are amazing friends @slowwalker,
Thankyou for sharing!
Resteem!

Wow, those are incredible. I am intrigued at the ceremony of drawing the pupil of the eye? What is behind that do you know?

I would love to have a small buddha in my back yard. Are there any rules to look out for when it comes to placement?

@OriginalWorks , really awesome photography, these statues looks likes carve in stone, i will also resteemed the post to my followers so they also know about your work.

The @OriginalWorks bot has determined this post by @slowwalker to be original material and upvoted it!

Yes are welcome.
I will follow you every day. But please see my blog occasionally.

This comment has received a -16.67 % downvote from @meanpeoplesuck thanks to: @blacklist-a.