tokenizer (35)in #cryptocurrency • 4 years ago

If you’ve been around the block for a while, you’ll have realized that forks aren’t new to Bitcoin. The last hard fork we experienced was on August 1st which gave birth to Bcash; an altcoin with no special feature you can’t find within the first five top cryptos. Currently the controversy is on 2X. The cry against SegWit2X, a proposed hard fork reached and signed by some big players in the crypto community has never been louder.

SegWit2X is a proposed Hard Fork which if successfully locked in (via an 80% threshold), would increase the Bitcoin block size limit from 1 to 2Mb. Yes this has a couple of pluses.

Doubling the block size would create room for more transactions to be added to the block. This should of cause prevent queuing.

So why the contention since this fork is for good?

The fundamental question we should be asking is “have we fully utilized the dividends of SegWit”? If no, then why do a HF? We are doing payments with <= 20 cents transactions fees and they are going through in about a block or two and remember we haven’t even started exploring Lightning and schnorr signatures yet.

Address compatibilities
This is an issue with Bcash also. A spender might send BTC to a 2X address resulting in the loss of such tokens since their addresses are valid on both chains. 2X has no intention of addressing this issue.
These same miners and whales clamouring for a hard fork for want of space are refusing to signal SegWit in their blocks. If every exchange and miner implements SegWit there'll be enough breathing space till Lightning and other Upgrades come on board.

Wipe out
Another ground of contention is the risk of a wipe out. Bcash had to do an urgent downward difficulty adjustment, which made it's block header invalid on the legacy chain and so a wipe isn't feasible. 2X has no plans for this update for now.

Hard forks are generally risky if not properly done. People could loss their token holdings in the process.

This proposal has created a big rift in the community that we might by early November see another altcoins rolled out. Bitcoin.org published a list of companies that support this fork, warning bitcoin users to stay clear of them. This has led to accusations and counter accusations in the community.
The hard fork requires 80% threshold. At the time of publication, support has dropped from about 95% a week earlier to ≈ 87%. This is dues to the withdrawal of F2pool and BitMex from signaling the Hard fork. The controversial fork has had overwhelming consensus from the big players like Bitmain’s Antpool, coinbase, Xapo and Bitpay.

I think it’s high time the Bitcoin community: miners as well as participating nodes gets our priorities right. Currently there is enough space to handle the average number of peak period transactions. If we a doing a hard fork, let’s make sure it addresses more issues than just floor space.

Could JP Morgan and Jordan Belfort be laughing in mockery? Probably!

It will be removed next time we restart our pool server. twitter.com/yangventures/s… 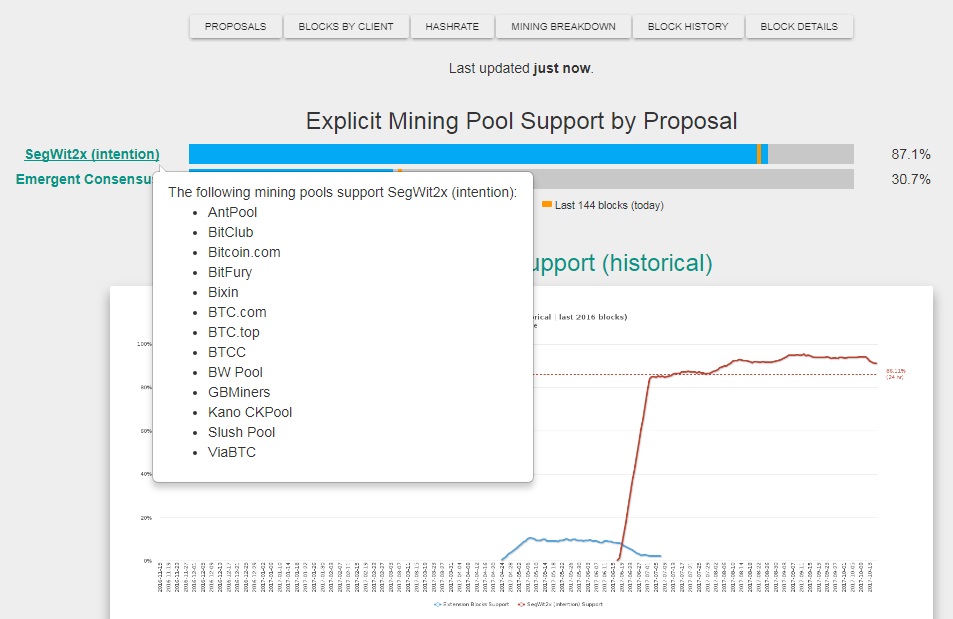