How I noticed Verge and FairCoin looking at market charts alone 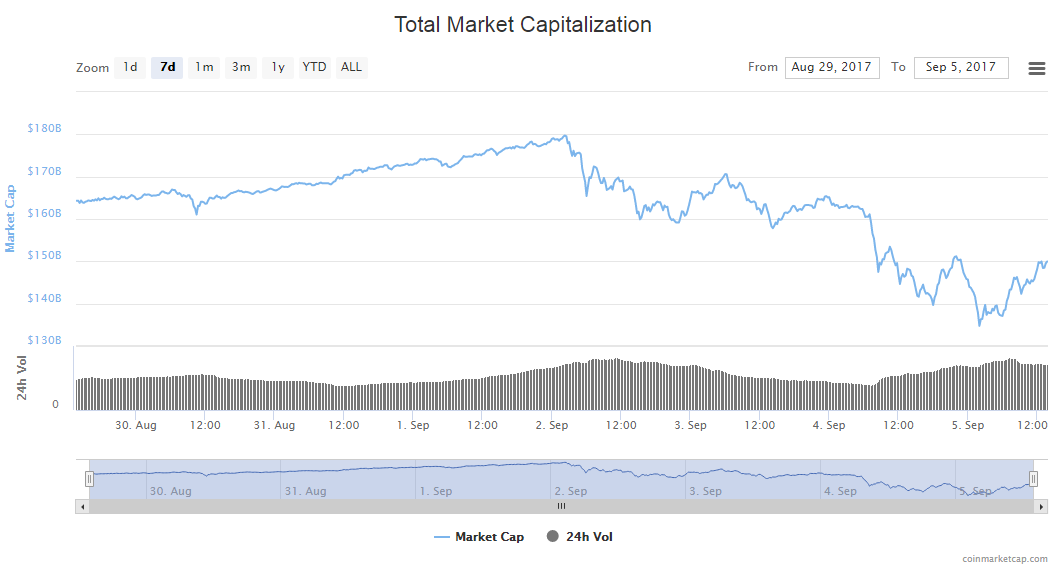 As any follower of such matters might likely be aware, crypto-sphere is currently experiencing a recession. All media points out that Peoples Bank of China recently declared intention to punish all new and strictly regulate all existing ICOs under their jurisdiction. Some even speculate that the wording on PBoC's statements suggests that it might not be limited to Initial Coin Offerings, but instead affect all cryptocurrencies, including leviathans like Bitcoin and Ethereum.

Looking at the image above, I'd say recession started couple days earlier than news appeared. But no matter the cause, I'd like to point out an interesting difference in how currencies behave in these times of stress.

Price of most of crypto assets relative to Bitcoin closely follows Bitcoin's own price relative to fiat. This sounds reasonable: as people lose faith in crypto markets in general, low-cap assets get abandoned first, Bitcoin carrying the last stand. Charts I plainly copied from coinmarketcap.com show that prices even of greatly respectable currencies, fall relative to bitcoin as bitcoin's own USD price declines.

Tether, of course, due to its unique pegged nature, looks mirror image of the above.

Two of the other charts stand out. Smaller currencies Verge ($91m cap, $15.5m volume) and FairCoin ($34m cap, $0.2m volume), while still enjoyng increased trade volume, do not seem to be abandoned by their supporters. Charts don't show visible dramatic declines as above. In fact, so far they only gained in both USD and BTC price.

If this was a conventional stock market, I'd say this signals that insiders buy their stock cheap. One could argue that maybe Chineese just don't have much XVG or FAIR to sell. Other smaller currencies are indeed affected, though.

But who knows - I most certainly don't. I'm not involved in any of these communities and do not know any details. In fact, I first noted their existance today during this little research of mine. Surely going to know them closer.

I noticed this too.

Oh wow. Thanks for the strong upvotes! In fact, you provided enough motivation for my lazy butt to actually go and investigate :)

Congratulations @teo-nyx! You have completed some achievement on Steemit and have been rewarded with new badge(s) :

Faircoin is very interesting, it's backed by a cooperative, and a community. I don't know how promising the blockchain tech is, but they use their own consensus model, proof of cooperation.
I am not involved with faircoin, but I'm interested, and might buy some soon.
Thanks for the post. Upvoted.

Faircoin seems nice. Was not impressed by Verge though, primarily because their whitepaper mentions no description of their own tech. Not even sure whether they are a BTC fork or not. As to why increase in volume and price, it seems HiBTC exchange is going to list Verge soon, hence the rush.

Faircoin works within a real economy. It's not just speculation.

As far as I can now tell, Faircoin is pegged 2:1 to EUR, backed by FairCoop's promise to redeem for EUR if asked by a registered merchant. This explains market price movement during the recession. So far, despite quick 20-30% recession, the peg held.

FairCoop itself seems to be a group of idealistic rebels. Fascinating story of a guy robbing banks for half a million € to eventually fund a cryptocoin-based freedom movement speaks for itself: <1> <2>

Ideological questions aside, their tech seems solid for my unsophisticated eye. They have a working net that serves real people and real merchants - not much of them so far, but it works. Whitepaper is open and honest about what, how, and why they do; and does not have obvious technical flaws visible to my eye. My initial concerns about governance centralization were pretty much answered by their FAQ. It's still not a democracy, no matter what they claim - it's an oligarchy of (hopefully benevolent and well hidden) chain admins who has power to replace themselves and validated nodes if voted 5 of 8. FairCoop uses telegram channels extensively for collective decision making. Further investigation would require one to dive into those telegram channels.

Meaningful research, congratulations. Just a precision.. The chain admins just execute decisions of the assemblies of Faircoop. So they are not any oligarchy. If any of them disobey the Faircoop consensus, would be discarted of this role...

As long as chain admins are (mostly) benevolent, that works. But I don't see any protection from the case when corrupted chain admins collude. Did I miss something? There's no public voting mechanism built-in to replace admins. Therefore, it can not be called a democracy.

Maybe that's fine. Maybe sole possibility of hard fork should keep admins in check. But still, my point being that a single non-forked instance of FairCoin is an oligarchy.

CVN also have a technical way to not obey chain admins actions... At this point CVN and chain admins control each others.

And yes, as a last chance, ever the Faircoop assembly can deploy a new wallet, which change the chain admins... if there are the need.

Thanks for enlighten me on faircoin. Are you still not involved? The main idea is to keep the money in their own system and by getting more and more people involved to increase its value and create a parallel economy.

Solid post. Good to see I'm not the only one that is thinking about this. The blockchain is here to stay. No matter what any crypto will do in the upcoming years. I think that's a conclusion we can make by now. I found this amazing platform: https://www.coincheckup.com For a complete crypto analysis on every single tradable crypto out there.