Life is a pyramid scheme

Stan Larimer said in this video interview with Terry Brock that “For every winner who is currently gaining in crypto someone is losing”:

That’s not actually strictly true though Stan. It only becomes true when the draw-bridge gets pulled up and crypto becomes a zero-sum gain. The new money coming in makes early adopters all winners, because currently we’re in a pyramid scheme, but that’s good.

Pyramid schemes in essence reward early adopters, much like life. They should therefore be some delineation between a pyramid scheme and a scam. This goes particularly for anyone saying bitcoin is a big “pyramid scheme” and smugly going about their business, ready to gloat when the bottom falls out. That may not happen if it retains it’s value. If it goes to zero then they're right.

The Great Oklahoma Land Rush of 1893

“At precisely twelve noon on September 16, 1893 a cannon's boom unleashed the largest land rush America ever saw. Carried by all kinds of transportation - horses, wagons, trains, bicycles or on foot - an estimated 100,000 raced to claim plots of land in an area of land in northern Oklahoma Territory known as the Cherokee Strip. There had been a number of previous land rushes in the Territory - but this was the big one.”

The Great Oklahoma land rush disproportionately rewarded early adopters. If you were late to the party you got poorer quality land or no land. You didn’t lose your shirt. So long as land still has value, no one who got involved is losing their shirt on this deal. This is a pyramid scheme. It’s not a scam.

“The discovery of gold nuggets in the Sacramento Valley in early 1848 sparked the Gold Rush, arguably one of the most significant events to shape American history during the first half of the 19th century. As news spread of the discovery, thousands of prospective gold miners traveled by sea or over land to San Francisco and the surrounding area; by the end of 1849, the non-native population of the California territory was some 100,000 (compared with the pre-1848 figure of less than 1,000). A total of $2 billion worth of precious metal was extracted from the area during the Gold Rush, which peaked in 1852.”

Another pyramid scheme with early adoption reward. I imagine if you had some of that gold now, it would have appreciated considerably in USD value over the years.

This is perhaps the most commonly used comparison with the cryptocurrency explosion, and is the most analogous. Many companies got pumped and folded during this era where IPOs were gaining insane evaluations from speculation. (Ripple anyone??).

It should be noted however, that the marketcap of the success stories from the dotcom bubble has risen steadily in the 21st century to form over 30% of the entire technology sector marketcap. 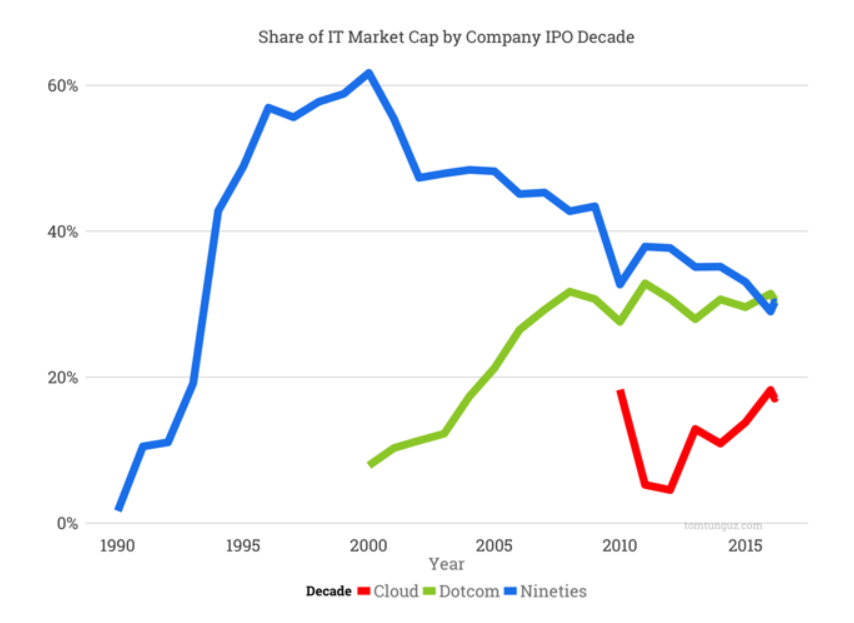 So I would implore anyone reading to discriminate between a pyramid scheme and a scam. And also to pick your pyramids wisely. Peace out!

Interesting. What movies have you seen lately?

A little bit off-topic, but I enjoyed Terminator Genisys.

How old are your children now?

The retirement age needs to be raised. A portion of Social Security ought to be privatized, if not all. And there probably needs to be some means testing. It's a Ponzi scheme that's not sustainable.