Meet SonoCoin: The First Cryptocurrency You Can Hear 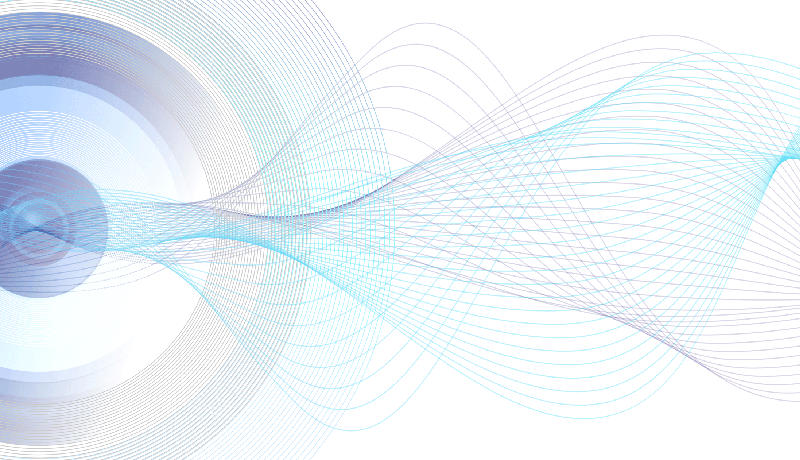 The World SonoCoin Was Built For

Rapid developments in blockchain technology have been making headlines since March of this year. The exponential growth in cryptocurrency market capitalization can often take seasoned investors, accustomed to traditional bonds and the stock market, by surprise. But there is no end in sight for blockchain/cryptocurrency as an enterprise. Now, more than ever, there is a high demand for new innovations in the blockchain/cryptocurrency industry, including new storage methods. But first, we must consider where we came from.

The very first cryptocurrency, Bitcoin (BTC), along with the concept of blockchains, has been around since the 2008 financial crisis. As Satoshi Nakamoto argued in the Bitcoin white paper , the main benefit of such a payment system lies in a purely peer-to-peer value transfer without a trusted third-party, while a secure open book (also known as the public ledger), publicly accessible, guarantees the integrity of the blockchain network.

Many faithful followers of regression theorem , including prominent economists, businessmen and politicians all over the world, argue that Bitcoin is based on nothing but thin air because it has no real history as a genuine commodity. But this is not necessarily the case. While many of us may have had trouble wrapping our heads around the concept of Bitcoin, we might have missed the fact that Bitcoin is not a standalone currency but instead it is a unit of accounting attached to an innovative payment network. In other words, Bitcoin was invented merely as an accounting unit bound up with a brilliant payment system. The value proposition of Bitcoin is embedded in a structure, where a currency and a payment network are utterly interlinked together by the code.

Fast forward nearly a decade, we have more than 1,000 various cryptocurrencies and assets with a total market capitalization that, according to CoinMarketCap.com, hovers around $140 billion.

The reason for the sudden rise of cryptocurrency market is open to debate. However, the blockchain community has received unprecedented support from international enterprises, institutional investors, and government policy-makers this year. IBM partnered with Nestle and Walmart in order to identify ways that the global food supply chain could benefit from the blockchain.

Since the formation of the Enterprise Ethereum Alliance (EEA) back in March, more than 150 members , with heavy hitters such as Microsoft, J.P. Morgan, Intel, the Indian government and others, have joined the organization. Japan and Korea recognized Bitcoin as a legal method payment back March and July, respectively. Meanwhile, the technical aspect of the blockchain evolution does not seem to be overshadowed by its increasing publicity.

Here are a few highlights. The Bitcoin scaling proposal, SegWit Lock-In, was activated in August. Furthermore, Vitalik Buterin and Joseph Poon have jointly published the PLASMA white paper, a new scaling solution for Ethereum. Ripple successfully sent a single blockchain transaction across 7 different ledgers through its Interledger Protocol (ILP) in a live demo.

As we witness the huge amount of capital influx into cryptocurrencies, more blockchain start-ups with bright ideas have also entered the arena. Storj, an encrypted cloud storage service powered by blockchain, raised $20 million during its ICO and is determined to challenge centralized storage service providers like Dropbox, Amazon S3 and Microsoft Azure. Elliptic, a company which identifies illicit activity on the blockchain, has received $7 million in funding and hopes to attract law enforcement agencies as potential clients. Universal Sharing Network, a fully automated service by Slock.it, allows customers to locate and rent various assets using smart contracts. Golem is a decentralized supercomputer network, accessible to anyone, where individuals can monetize by 'renting' out their computing power or by developing and selling software. The global blockchain industry will continue to grow and that trend shows no sign of slowing. The time is ripe for new, more innovative cryptocurrency. Luckily, SonoCoin fits the bill. SonoCoin (symbol: SNC) is the only blockchain venture of its kind who revolutionizes the monetary transfer of value, and takes remittance payments to another level by introducing audio file-based money transfer. Since SNC is not mineable, the network uses Proof-of-Stake (PoS) algorithms to verify transactions. PoS is an alternative way of confirming transactions in order to achieve a distributed consensus. PoS first surfaced on BitcoinTalk.org in 2011. However, the first cryptocurrency to use this method was Peercoin in 2012. Unlike the Proof-of-Work (PoW) model, where the algorithm rewards miners who solve mathematical problems with the goal of validating transactions and creating new blocks, PoS algorithm selects the creator of a new block in a deterministic way, also known as a stake. Therefore, there is no block reward in PoS. Due to the nature of PoS, all coins are created in the beginning, and there is no inflation in such an ecosystem. The total supply of SonoCoin is limited to 100 million, the same amount adapted by NEO (formerly known as Antshares).

Where to get SonoCoin (SNC)?

SNC is currently listed on SonoCoin.money . Each coin costs $2.5 (USD). The users can purchase SNC by trading in up to a dozen different of cryptocurrencies, including Bitcoin, Litecoin, Ether, and other major currencies. When you finish setting up the amount of funds and have filled out your email address, you will only need to click 'exchange,' and you will be shown the web address where your fund will be sent. Within a few minutes, you will receive the SNC downloading link in a confirmation email from the exchange. Besides the SonoCoin exchange service, SNC will likely be available on major cryptocurrency exchanges and SonoCoin partners' websites soon. 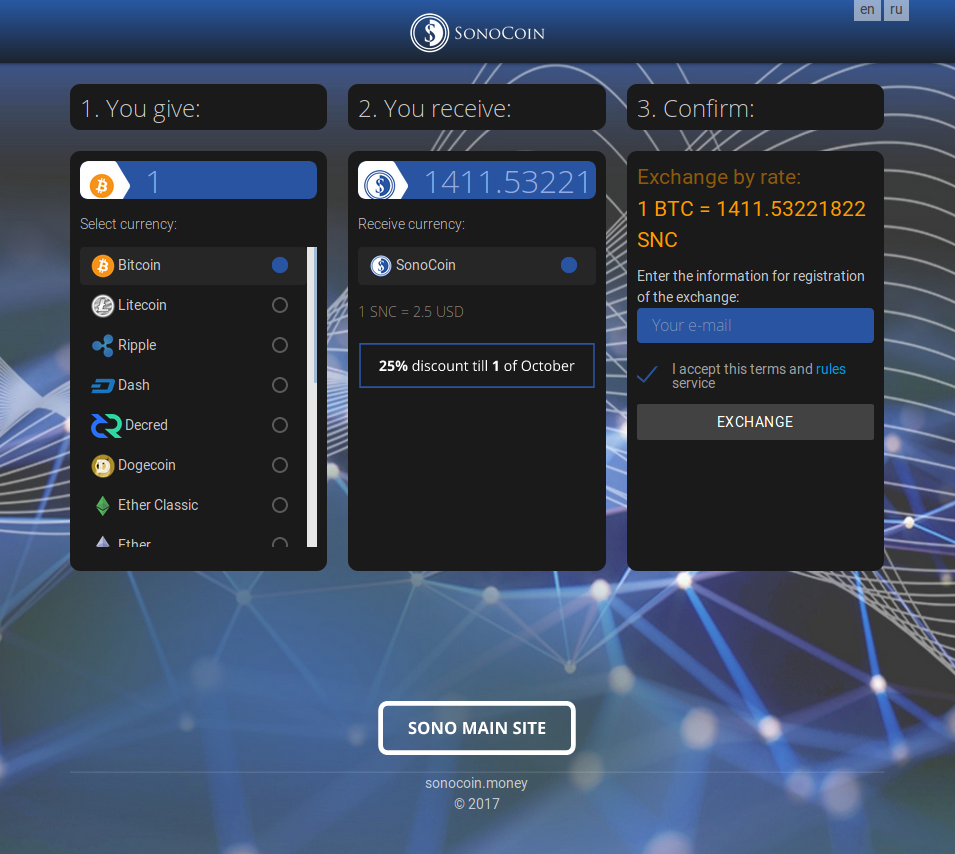 After purchasing SNC, you might be wondering where can you store your coins. The short answer is, anywhere you prefer. Unlike almost all cryptocurrencies in the market today, SNC requires no wallet at all.

Let me repeat that. SNC requires no wallet at all.

While efforts are being made to make desktop and hardware wallets more secure and easy to use, it is not hard to find stories of investors who have lost funds due to forgetting passwords/backups/private keys, accidentally trashing old hard drives, email deletion, broken/missing phones, compromised wallets, data leak and other follies.

The innovative design of SonoCoin has circumvented these challenges by replacing the wallet with a simple audio file as a way to store and transfer coins. In other words, SonoCoin can be recognized by any device which records or reproduces sounds. Each coin is represented by a digital file or an audible sound, which allows users to share and transfer SNC through emailing services, popular messengers and social networks.

More importantly, users can have full control of their SNC without a need for identity verification or any association with financial accounts. Modern desktops, smart phones, USB flash drives and even vinyl records can be convenient choices for SNC storage, meaning a variety of backup media support for better safe keeping. Since each SonoCoin can be password protected, the user's fund is not susceptible to cases of theft and hacks.

The SonoCoin mobile app allows SNC owners to re-issue coins, which can be divided into smaller coins or combined into larger ones with arbitrary denomination. The decentralization and stability of SonoCoin network is embedded into a large number of nodes running over the mathematical model of the blockchain.

Sound familiar? SNC is an individual version of the blockchain-backed crowdsale platform. Unlike other custom token platforms such as NEO or Waves, SNC offers a straightforward and fee-free approach to personalized tokens in smart contract coding. Thanks to SonoCoin's elegant and simple design, both tech-savvy users and cryptocurrency novices can handle SNC like regular files and carry their coins in an iPod. Here is a brief illustration comparing the differences between SNC, ETH, NEO and WAVE: Convenience, simplicity and security in peer-to-peer transfers could attract demand for SonoCoin in the foreseeable future. The coin is new, however, and most experts are still awaiting details from its upcoming whitepaper, any plans for an Initial Coin Offering (ICO), risk disclosures, and other details from SonoCoin's founding team. Nevertheless, some blockchain industry leaders are already investing in SNC, thanks to SonoCoin' distinguishing qualities and its potential for growth. SonoCoin is the only cryptocurrency you can literally hear, store on vinyl or iTunes, and transfer simply by broadcasting sound waves between devices. The coin's homepage, which has been updating regularly this September amid the launch, can be found at http://sono.money

Nice info. Thanks for sharing!

Thanks for sharing by the way :)