In my DApp Review series I will be taking a deep dive into various Ethereum Smart Contracts that are now available. Most DApps require MetaMask to interface with the Ethereum blockchain; I made a quick MetaMask Setup guide if you have not done so already.

The DApp I'm talking about today is called POWH3D, or Proof Of Weak Hands 3D (The link to the website will be at the bottom of the post). It is a smart contract that sells ERC-20 tokens: For every token that is purchased from the contract, the cost goes up by about 10 GWEI. For every token sold, it goes down the same. In this way, the Ether in the contract will always be tied to the number of tokens in circulation. 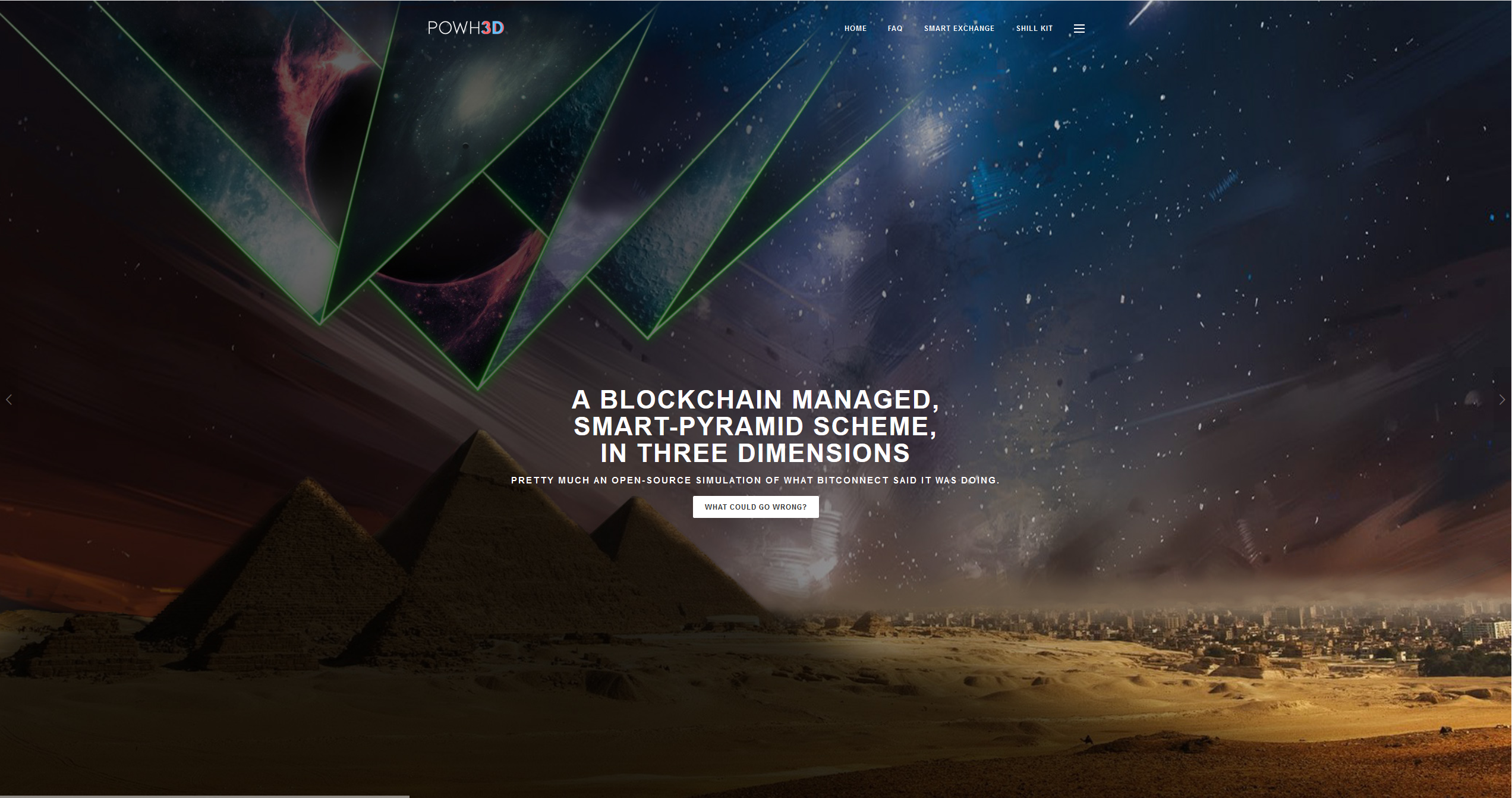 Ok, but whats the point?

This is where it gets fun: Dividends. You see, out of every purchase 10% of the ETH is taken and redistributed to the current token holders pro rata. So as a token holder, you automatically receive a proportional amount of Ether for every single purchase after yours. Sounds pretty cool right? But it gets even better, the same is true when someone sells their tokens. When Joe decides to sell, 10% of the Ether from that sale is ALSO distributed to the token holders. This means that token holders don't care whether you buy or sell, they make money either way! That is where the Proof Of Weak Hands concept comes in to play. You pay a premium to join the party, and to leave the party. These premiums fund the party. Due to this, token holders are incentivized to stay in the party and get paid over time. Those who leave early will lose out on their 10%, as well as any future dividends.

Do I have to pay 10% when I withdraw my dividends?

Nope! Dividends can be transferred to your wallet any time at no charge (except for the Ethereum gas cost of course). So you can use these dividends as passive income, but there's also another option: Reinvestment. You can use your dividends to buy more P3D tokens from the contract, increasing your future dividends. 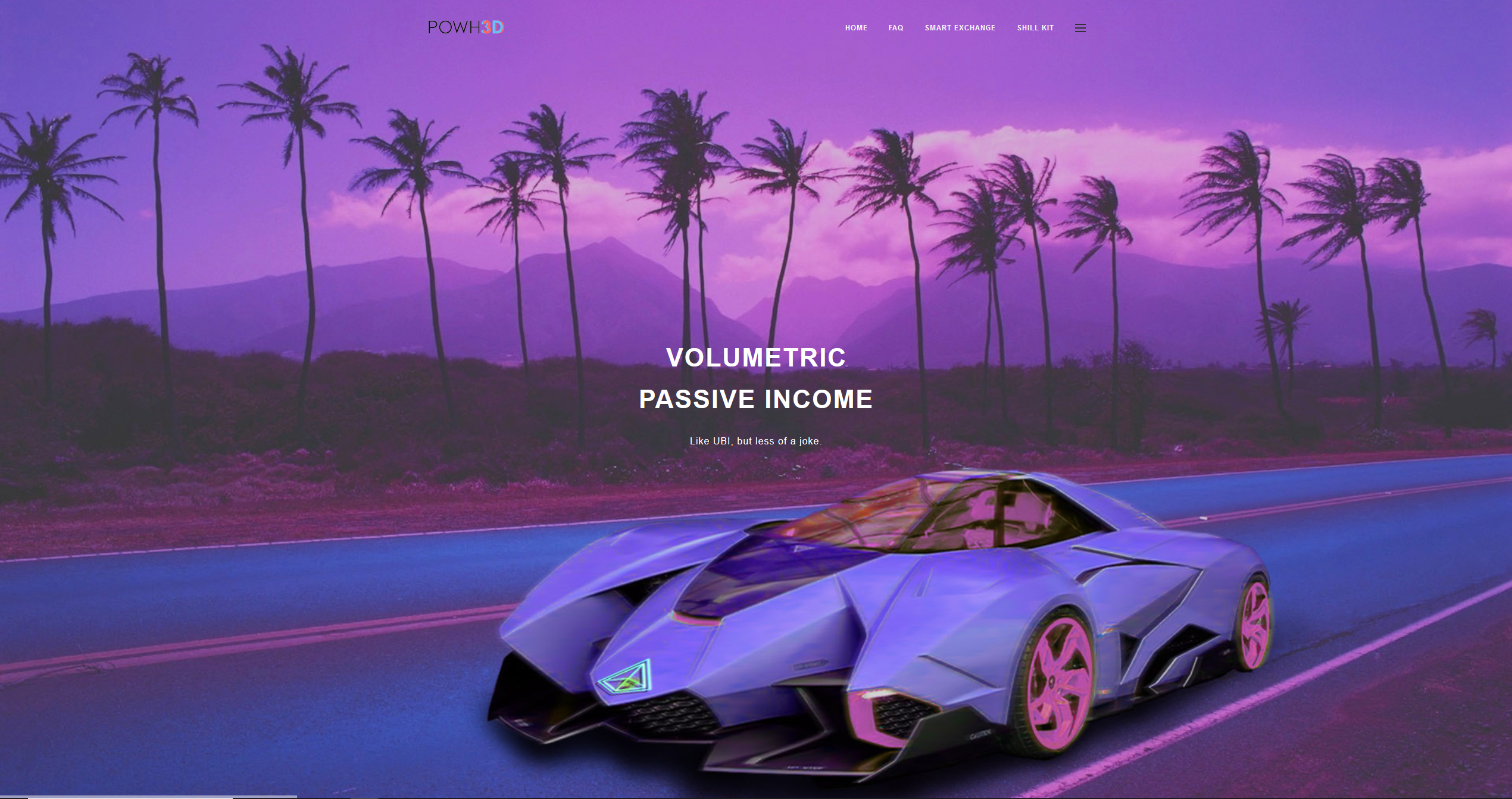 I'm glad you mentioned that! Lets take a look at how the SEC defines a Ponzi scheme from www.sec.gov.

A Ponzi scheme is an investment fraud that involves the payment of purported returns to existing investors from funds contributed by new investors. Ponzi scheme organizers often solicit new investors by promising to invest funds in opportunities claimed to generate high returns with little or no risk. In many Ponzi schemes, the fraudsters focus on attracting new money to make promised payments to earlier-stage investors to create the false appearance that investors are profiting from a legitimate business.

Basically, Ponzi schemes "claim" to invest your money in high return / low risk assets, while guaranteeing you a fixed payout over time. Then they proceed to hold on to your money, using it to pay the next guy. In POWH3D all funds are securely stored within the smart contract, and cannot be removed by anyone without following the rules defined by the contract. Other than the dividend payout when others buy & sell, there is no guaranteed payouts. But each P3D token has an intrinsic value of the dividend payouts that would be automatically accrued by the selling of all other tokens.

The distribution of POWH3D is completely transparent, and enforced by this immutable contract. If people were to stop investing, nothing would happen because there is no fraudulent payouts. If you are unfamiliar with how smart contracts work, this is a quick read to get the gist of it. But essentially once a smart contract is created on the blockchain, it can never be changed or removed. This guarantees that all the rules will be enforced autonomously. But can't someone just take all the money we've invested?

Good question. It is possible to create a smart contract with a "back door" that allows the creator to maliciously take money. Some such contracts do exist, so always exercise caution when using them! But this smart contract is open source, and can be easily reviewed by peers. I strongly encourage you to read the POWH3D contract here.

It has been audited by several developers and community members to have no back doors or other potential exploits. In fact, the contract is only about 800 lines, and someone with minimal programming experience can easily read through it.

Ok, but what happens if everyone sells their tokens, won't I be left holding the bag?

In any old pyramid scam this would be true. But this is where the 3D aspect comes into play: as everyone is dumping their tokens, you'll be receiving dividends for every sale. As more people sell, your pro rata portion of the pot increases, and your dividends increase. If you're the last person in, you had the strongest hand, and will be rewarded with generous dividends.

So are there guaranteed returns?

As I mentioned above, aside from the dividend payouts enforced by the contract, POWH3D does NOT guarantee any returns. This is what separates it from a typical Ponzi scheme. In order to get paid dividends, new money must come in, or current holders must sell. Outside of these actions no dividends are ever paid or promised. That being said, the team is working on other contracts that will create more avenues to use and earn P3D.

Is there a way to increase my dividends besides buying more tokens?

Yes! If you stake a certain number of tokens (which just means holding them in your wallet) you will receive a "Masternode" link. Anytime someone who has clicked this link buys or sells P3D tokens, 30% of the fee incurred is deposited directly into your dividend fund. You will continue to get this cut from that user as long as the cookie remains on their browser. At the moment, it requires 5 tokens to have a Masternode, but this is a promotional level and will likely go up to soon. 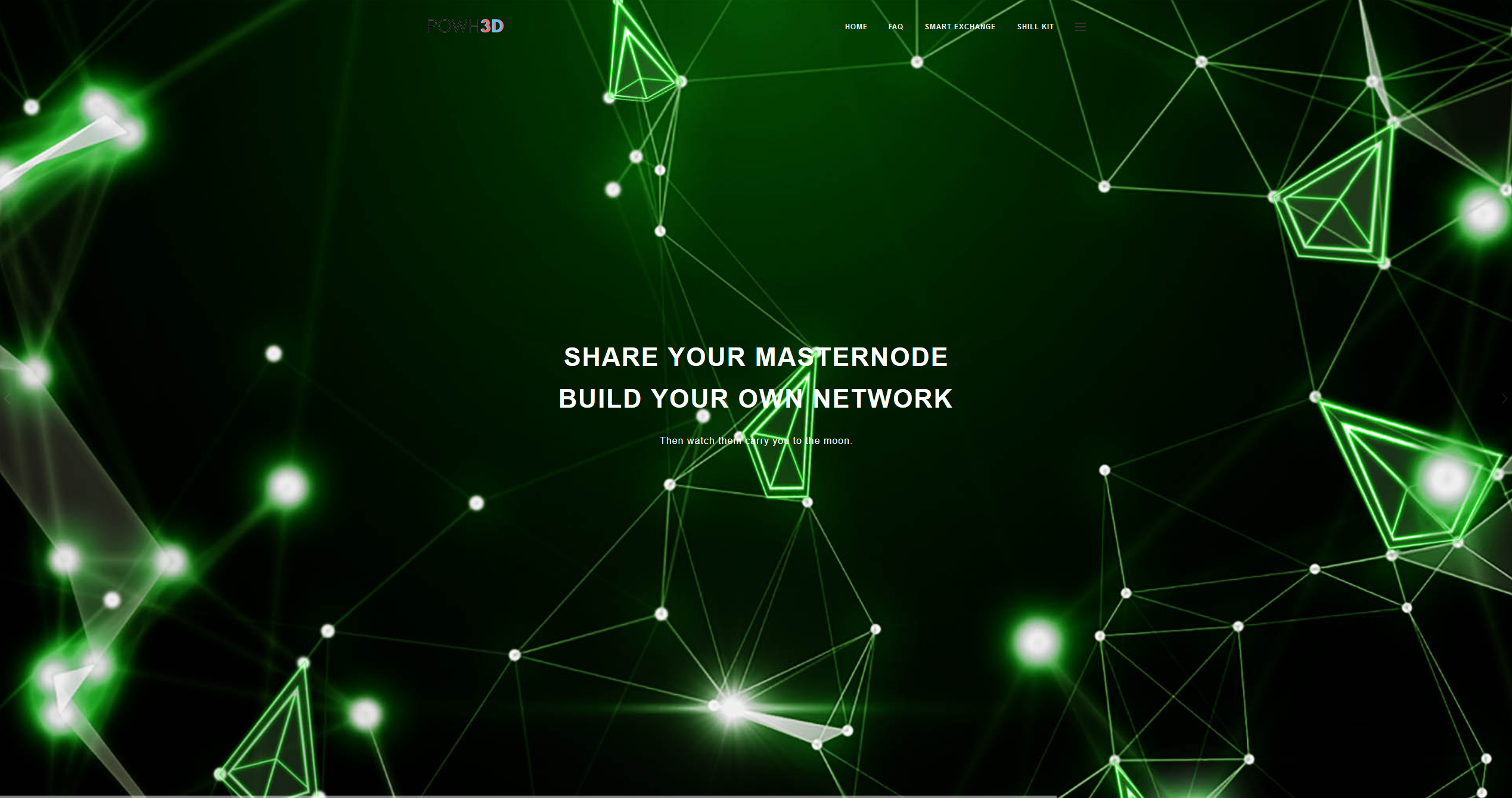 There was a team working on a project that was known as POWH. There were several issues pertaining to the contract and team members in that project. The POWH3D team is unaffiliated with the old project, and has written an entirely new contract from scratch.

Aren't there other potential problems?

As with anything made by humans, nothing is perfect. There is the possibility of bugs that have yet to be found, but I believe that is unlikely. The contract is simple, and has been reviewed by several credible people. The team seems solid and helpful too, and is quite active on their discord.

Where do you think this is going?

As with any project like this, nothing is guaranteed. But I've spoken with the devs and reviewed the contract myself, and I think this project could go a long ways. It retains many of the potential benefits of a Ponzi scheme while removing the shadowiness and criminality of it. There is also no "end-game": It could theoretically last as long as Ethereum is around. The team is also working on other contracts that will work with the P3D token, creating an evolving ecosystem around it.

Full disclosure I own P3D, and the following link is my Masternode. I'm not affiliated with the developers in any way. I know this article is a bit of a shill, and this DApp review series is definitely not going to always be that way. But I do think this project has some real potential, which is why I started with it. If you have any other questions please post them in the comments.

I appreciate the resteem Craig, thanks!

So, How did this work out?

The project seems interesting and doesn't seem malicious as I had initially suspected when I first heard about it. I'm not sure I will be buying into it myself, but it will be fun to watch how the project goes.

Yeah, I was dubious at first as well. The community on Discord is great though and everything is very transparent.

You got a 3.98% upvote from @postpromoter courtesy of @pr3datr0n!

Thank you for the interesting post. You say you need 5 tokens for the master node. How much are these tokens?

Thanks. No harm in getting some then. What have you got to lose. No brainer. Thank you again for the post. I had no idea that this sort of thing was happening.

No problem! Yeah even with just the minimum Masternode amount you can make a lot of dividends with referrals. There's going to be other awesome projects based on Ethereum that we haven't even thought of yet too, this is just the beginning.

Wow greate article!
You just got a 100.00% upvote from @postdoctor!
Thanks for using the @postdoctor service!

Very interesting and well-written blog post. I have been interested in doing something similar myself, even created a website for it. I was wondering maybe You would like to talk about writing for that or something similar to that. Shoot me a message if You are interested.

Other than that, great work!

Thanks for the offer haha! I have too much on my plate right now, but good luck with your project!

Excellent article on what probably will be a very disruptive coin, like Bit Connect was, but in a good way. I think this will take off (if its solidly constructed) and will jack Ethereum's price like crazy.

Great article. Also for the FRENCH people, i made a video to explain deeper the concept.

I never thought blockchain technology would end up being used for this lol!

You can use Tisko Bot to promote this post.
Send 0.200 STEEM/SBD and the URL in the memo to @tisko to use the bot for a resteem and to get 5 good upvots.
Click here to see how to use Tisko Bot.

Love it! This game is addictive!

Searching for a better way to transact business without going through stressful and unnecessary government procedures?UNLOCKED! FIVE HIDDEN BENEFITS OF CRYPTOCURRENCY https://steemit.com/crypto/@mattygrace/unlocked-five-hidden-benefits-of-cryptocurrency#comments