pandorasbox (59)in #cryptocurrency • 4 years ago (edited) 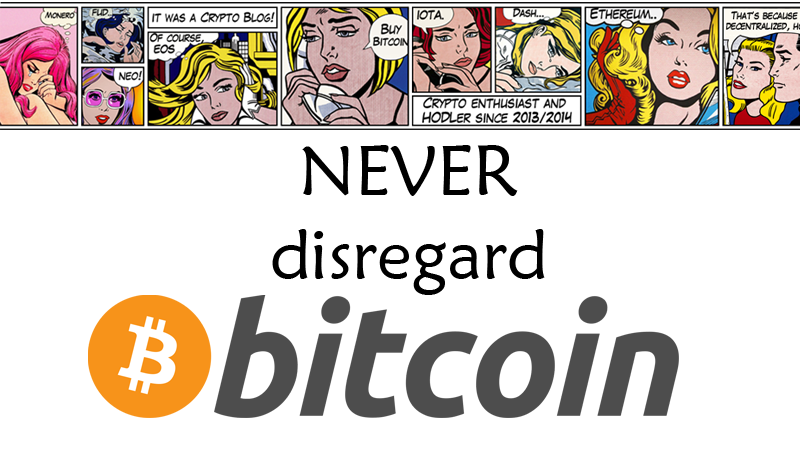 Altcoins are going crazy, even moreso than during last summer, and it seems like Bitcoin's days are numbered and the future is in alts. But the lesson I've learned is that no matter how great altcoins are: never disregard Bitcoin.

BITCOIN GOES UP, ALTCOINS GO DOWN

Most of you know that when Bitcoin goes up, altcoins go down because of people flocking out of them and trying to jump on the Bitcoin train. Right now it almost seems like the opposite is true: Bitcoin profits are pumping up the entire altcoin market significantly.

When alts are doing great it's easy to feel like they are the future, their tech is superior and their development much more swift. It is why I got into mostly alts in the first place! There is definitely good money to be made in altcoin trading also, but regardless of how bright the future looks: the present belongs to Bitcoin.

Never disregard Bitcoin. When Bitcoin is done consolidating and is ready to break out, up or down, it will affect the entire market no matter how awesome your alts are. Bitcoin is still the 'dollar' of cryptocurrencies and the one which everybody uses to buy everything else. It is the main economy in cryptocurrency and the one where everything is tied to.

I found this interesting picture that illustrates the 2017 boom/bust cycle of Bitcoin. It shows the average drops and the subsequent price spikes afterwards pretty well. It also shows that if this pattern is to continue, it will bring us up significantly: This projection puts us at an estimate of $33K per Bitcoin when the next spike happens. Local Steemit celebrity @haejin has predicted a short term target of about $23K per Bitcoin. Although, admittedly, he also predicts that despite this altcoins will have much higher Bitcoin valuations also. I'm not so sure these situations will coincide at ideal moments though.

The way I see it, Bitcoin will either go up to $23-33K like the predictions are, which means that when this happens it's very likely to see all the altcoins dropping 50% in this process (simply because of the difference in BTC-Alt ratio, but probably even more than 50% because of the mass FOMO exodus out of alts and into Bitcoin).

The other option is that Bitcoin goes down and crashes down to $12K, $10K or $8K. I wouldn't consider the latter to be impossible. When something like this happens and Bitcoin goes down so much, history shows that in such a situation altcoins too suffer, and often moreso than Bitcoin itself.

The only real moment when Altcoins can really shine is in times like we are now: when Bitcoin is going neither up nor down. But how long will that keep going on? How long before Bitcoin starts to make another serious move? 1 day? 2 days? 1 week? a month? To me, playing the altcoin trading game has been fun and profitable, but it's about time to move back into Bitcoin because it is starting to feel like a game of chicken to me.

I'm sure there are a lot more gains to be had, but I am consolidating my positions into the good solid crypto's and taking my trading positions out. What do you all think? Am I too early? (I usually am..)

I just remember this cartoon below here like it was yesterday, and it actually wasn't that long ago at all. I think when push comes to shove, not at all that much has changed. It makes sense, but I still feel like BTC isn't fundamentally good enough any more to sustain its spot as top dog for long. I just don't see it. Every time it tries to improve it gets rejected. One of my predictions for the year is that BTC loses market dominance and we see a "Flippening"

Actually you have a point. But from what i have seen over the last month even when bitcoin makes a run and alts dip, if you hold on to your alts then overall they give better returns. For example I had 10 last month in my portfolio, went in to omg and neo and bitshares and some other alts. Bitcoin at most would have made me 4k. But guess what I am sitting at 23k right now. Up 13k despite bitcoin running up 4-5k to 16-17k, I made more with alts.
But when it all goes to shit is when bitcoin starts dumping hard. like last night. My portfolio went to 18k from 23 lol. It was nuts but when it had that bounce I was back up and I cashed out 10k and sold my neo. Why? Hey if its all good now I can buy neo a little higher but I expect another dip after the big bounce btc had and higher probability of me getting a better deal on neo if BTC takes a dump overnight again. I have cash on hand and still I am little over half in and I got out nearly the same price as yesterdays high on neo. Now if BTC takes a dump to 10k, I would probably buy it because it will make me quick few k and then back to neo lol.

Well that is the thing.. that's only for the past month or so when Bitcoin is being slow and boring. That's different from an actual breakout though, like we saw during september-november, and also right before the Bcash fork. Alts do catch up eventually, just like right now we are just about caught up. But eventually Bitcoin starts to seriously move again and it'll translate to a 50% drop in satoshi's.. which again takes a month or two to recover later on, etc. It's okay to sit it out and hodl, but if you get into the right train at the right time you can increase your stack even more.

Yea. But I am afraid bitcoins gonna dip again a little. Ew&Patterns is saying possible dip to 10k after ABC is done. But on a bigger daily chart if I look at the abcde triangel looks like 12000 ish. We will see.

Oh, yes but if it goes down to 12K or below it's a far more serious dip and offers a more bearish outlook than we've seen up until now. I think altcoins will dip just as hard, if not harder, if Bitcoin drops to 12K or lower.
I think Bitcoin is the safe bet, and alts are insanely overvalued in many cases atm

This is one of the greatest things i've seen in a long time LMAO! Definitely tops 2018.

This post has received a 50.00 % upvote from @steemthat thanks to: @pandorasbox. Thank you for your support. Stay Updated And Use Cool Tools At SteemThat.com Want Some Steemish Built On Ethereum? Get You Some!

Perhaps it will be interesting to you.
https://steemit.com/bitcoin/@bot-share/n0-signal-paid-but-very-profitable-channel-telegram-currencies-exchange-signals

This post has received a 2.72 % upvote from @drotto thanks to: @pandorasbox.

This post received a 1.78% upvote from @morwhale team thanks to @pandorasbox! For more information, click here! , TeamMorocco! .
STEEM Price : 6.232 $