2018 is the Make-or-Break Year for Blockchain

Bitcoin is dead, it will never scale. Transaction fees are sky high, it takes days for things to go through. Ethereum can’t handle one single viral kitty cat app for one day. The whole cryptocurrency sector is a cesspool of scams, liars, pump-and-dump schemes and baseless speculation. Everyone and their mother has an ICO and a whitepaper and 99% of them don’t work. It’s a bubble, cash out now, don’t walk, run someplace safe. The crash is coming, and it's gonna be big.

Stop. Breathe. Let’s have a touch of perspective.

Imagine it’s January 1996. You’re pretty sure this new world wide web thing is gonna be big. You try to tell your friend: “Seriously, you won’t ever use your TV to watch broadcast television anymore, you won’t ever have to go to the library anymore, you’ll never buy a paper map again, you’ll never use a phone book again, you’ll stop buying CDs because you can listen to any recorded music at any time, ever. You’ll probably never need to write a check again because you can pay all your bills via your computer. Oh, and you’ll be able to buy anything you want without leaving your home.”

Your friend says, “OK sure, show me this internet thing.” You boot up your Pentium 166 MHz PC with 8 MB of RAM, sit down in front of your 13” CRT monitor, connect via 28.8 kbps dialup (you have to kick someone else off the phone first) and show him the Amazon Homepage on the copy of Netscape Navigator that you bought for $50. It takes 40 seconds for the page to load. You can buy books there, but it takes a week for them to arrive at your home, and you have to pay extra for shipping. He looks at you like you’ve lost your mind:

“This is so slow! You’ll never be able to do any of those things on here! Why wouldn’t I just go to the bookstore and buy a book today?” Pictured: The actual Internet in the mid-90s

If your friend is more technical, you might get arguments about how unreliable the network connections are, the high cost of hosting and serving web pages, the lack of any kind of best practices for development, the security concerns involved with e-commerce, and so forth.

Your friend isn’t really wrong. In 1996, Javascript had only existed for a few months. Google wouldn’t exist in any form for 2 more years. Streaming audio used RealPlayer, which introduced everyone to the term “buffering...” Generally speaking, home internet maxed out at about 28 kilobits per second, although if you were willing to pay hundreds of dollars a month, you could get an ISDN line that might go up to 128 kbps. Social media wasn’t really a thing, at all. The idea of the “web as a platform” was very, very far away indeed.

This is where blockchain is now; 2017 was our 1995. Technologies that will be commonplace and taken for granted in the future haven’t even been invented yet. Whole industries built on the underlying technology have yet to be imagined. And yet, despite the nascent state of the technology, there are people who have unironically said exactly the things I wrote in my first paragraph.

With this in mind, we can begin to imagine what the next year will look like for blockchain. Applications and layer-2 solutions that we have been promised will begin to roll out. Some will succeed, but others will fail. It’s really impossible to know which ones at this point. However, I firmly believe that regardless of who comes out on top, 2018 is the year when potential will begin to be realized. We will also move faster than the web. What took years to emerge for the web will take months for blockchain.

Your friend in 1996 wasn’t wrong, but neither were you. If you invested in Amazon at the time, you would be very wealthy today. On the other hand, if you invested in Excite instead you’d be considerably less so. Getting involved financially in an internet venture in 1996 was a very risky proposal, and determination of winners and losers seemed more or less random. But still, the web as a whole clearly had a ton of untapped potential. 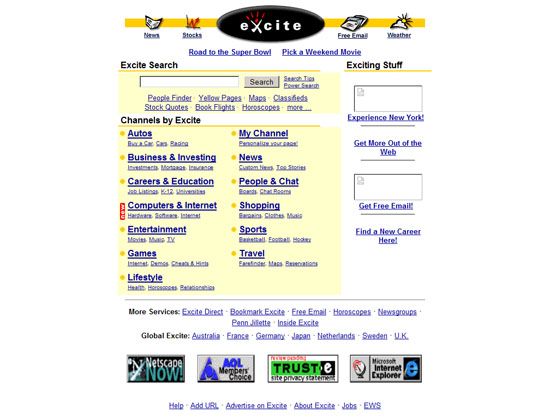 But what if you had had the opportunity to invest directly in the underlying technology stack in 1996: TCP/IP, DNS, HTTP, and HTML? Web sites and even whole internet industries came and went, but all those technologies (more or less the same basic ones that existed in 1996) are still used to power all the things we get over the web. Your investment would have grown 100x, if not more in the intervening years.

This is the unique opportunity that cryptocurrency provides: the chance to financially invest in the underlying technology directly, regardless of what application it may eventually be used for.

In 2018 we're going to get the chance to see which technologies are truly useful and which are not. And we have the unique opportunity to invest and benefit directly from those technology stacks that are most useful and most used, which makes this cycle fundamentally different from something like say the dot-com boom of the late 90s. Personally, I can't wait to see what happens.

Blockchain is a nascent technology. It's normal for it to have teething problems so people need to just chill out because developers will eventually find ways to solve these problems.

People are currently paying $28 on average to make transactions using bitcoin, according to data by BitInfoCharts.
litecoin is gonna be the killer!
maybe IOTA

Bitcoin and alt coins are the future

It is a huge year for the blockchain, but even if it is a bust, this technology will still be huge for the coming years

| Want to Know More! Check out introduction post on how to use HelpingBuddy

The @surajkumarsharma users are a small but growing community.
Check out the other resteemed posts in HelpingBuddy's feed.
Some of them are truly great. Please upvote & comment for helping me grow.

Food for thought. Thanks for this!

Yup, nothing really really useful about bitcoin these days. Maybe #IOTA will be the make or break coin or even #POWR

I'm putting money on ripple, steem, and cardano they are the make or break I think and the ETN coin

komodo is the future!

Damn dude - this is what I keep saying to people. I know you want this instantly but in the real world things just don't happen like that!

The crazy thing is, Steem solves so many of the issues we are having with Bitcoin/Ethereum right now.

I think the hardest part about Steem is saving your passwords. That is not much different from backing up keys to wallets on other cryptos.

Steem is ready for the world.

Wonderfully presented, analytical, and without the drama and hysteria you alluded to in your opening. Thank you for a reasoned and thoughtful reminder in why we love crypto.

"Technologies that will be commonplace and taken for granted in the future haven’t even been invented yet."

I agree with that. Personally, I'm one of those that can't wait for localized application of the blockchain technology in areas like elections.

A lot of riggings happen in my country (Nigeria). I'm consoled that thanks to the blockchain technology, it's not going to last for long.

Er...
For some reason I don't know of, I can't find the resteem button