martinwanderer (37)in #cryptocurrency • 2 years ago

When the planned blockchain-based book publishing platform Authorship.com announced their ICO they offered a ‘bounty program’.

Giving them your email address would get you free 75 ATS tokens (planned worth a bit over 10 Bucks, will be less now that the platform has shown to be just another rip-off).

Referring others would give you another 75 tokens per person referred. 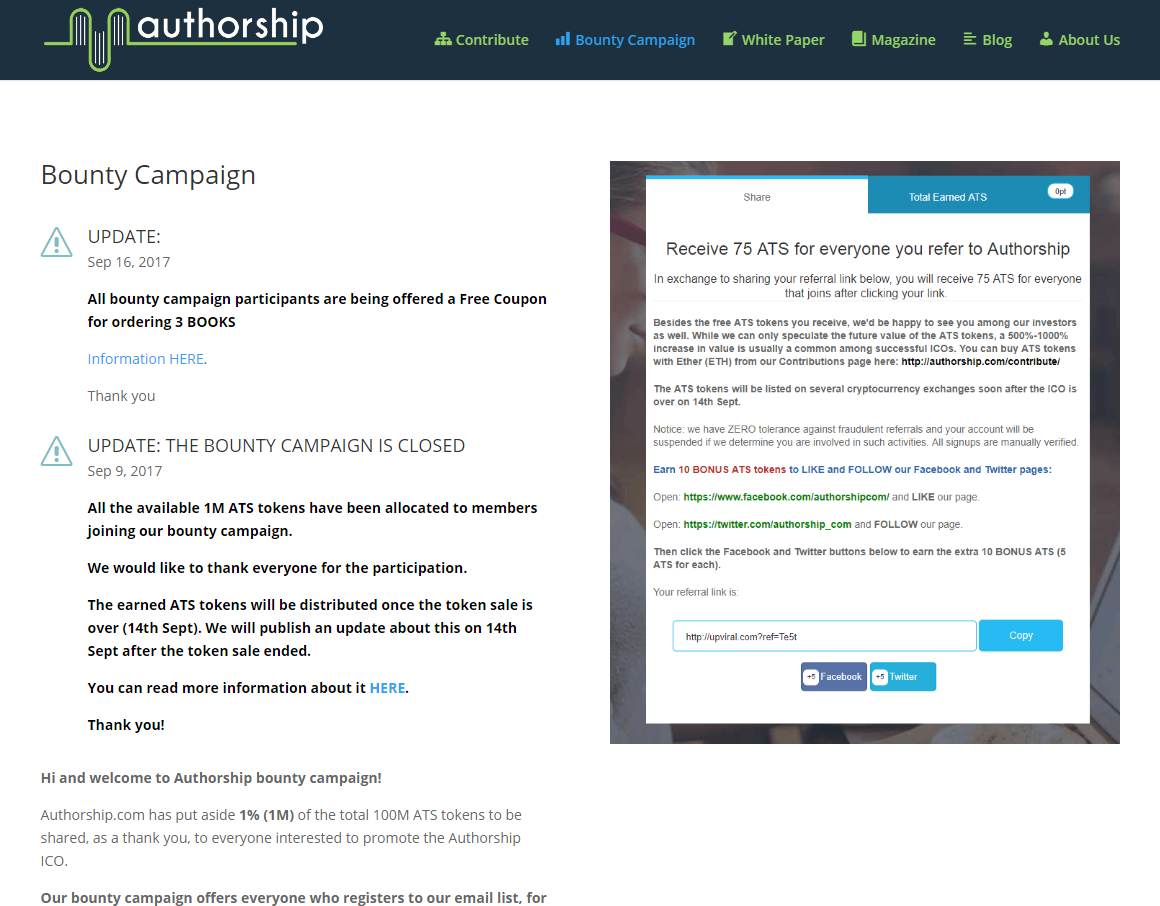 Authorship fueled the frenzy by posting ‘leaderboards’ showing off people with thousands of referrals, like any good MLM ponzi pyramid scam would do, and there were a LOT of people drawn to the free tokens and a lot of people (dead, alive, real, fiction, ...) were referred.

If you use a referral program and push it aggressively, expect fraudulent sign-ups.

Get your act together and sort them out. Or swallow the toad and pay out everyone, including the cheaters.

I personally had just a handful of – legit – referrals, but the way Authorship handled this after the ICO went through is despicable.

Authorship paid out the tokens to those who actually invested Ether. I can confirm that (I invested a symbolic amount).

But almost everyone who took part in the bounty program got screwed.

They posted a lengthy and lame excuse (http://authorship.com/2017/09/16/update-authorship-bounty-campaign/), blaming everybody but themselves, and, concluding this Hillary-level bullshit, announced that everybody who took part in the bounty program would NOT receive any tokens, but instead an incredible wonderful coupon code that might be used in case their platform ever gets done and you can actually buy books there in the distant future…

Not holding my breath.

(More likely they will change their business model and sell all the personal data and email / ether addresses they collected with the form where you could claim your fake-tokens.)

Posting that 3 books coupon code publicly is another middle finger to anyone who helped them promote their fake-bounty program:

Authorship.com: maybe you really had those difficulties that you describe in your rant, maybe not.

What you did now will result in one thing: nobody trusts you any more.

You can fuck right off.

Congratulations @martinwanderer! You have completed some achievement on Steemit and have been rewarded with new badge(s) :

I did this and got sod all.. I hope there token goes straight to hell. Totally untrustworthy and a token to steer well clear of. I've been tweeting daily about this scam

They now have started paying out 'everybody', top down. People who had few tokens are still waiting, but it seems they try to save the remainders of their reputation.

Waiting for the end of the operation before I update the article.

In any case: one of the bigger screw-ups in ICO history, and too many red flags (situations where they tried to cheat people out of their tokens based on bogus criterie, needlessly lied in their statements, etc.)

Thanks for the update.. I'm not holding my breathe ..we'll have to wait and see but this has definitely put me off token offerings

After some research, I found the co founders auto repair business in Maryland and I spoke to one of his employees and left Noland a message. Noland called back but I missed the call and I received an email update.

Following our previous update we want to announce that EVERYONE will be receiving its ATS tokens IF there are no more than 3 registrations from the IP he registered with. This is our final decision.

yeah, basically the same what 'Peter' has been posting on Bitcointalk.

In any case - even IF we still get our tokens - it is a massive PR disaster and has shown that their team lacks both professionalism and a firm grip on the technology they are building upon.
Rant emailed, rant posted to website, half-assed retraction, but no public statement, rant deleted from website, tokens yes, tokens no, double tokens for some...

No contingency plans, poorly executed, terrible zig-zagging, user blaming, etc.... if they run the actual Authorship platform the same way that they dealt with this bounty screw-up... they are doomed.
And it will impact the value of the ATS tokens.
Investors will NOT be amused.

I wonder how they could have determined all of this in two days and set up the coupon nonsense. Seems like that would have taken longer to do all this.

And, I think there is a way that we can look up on the blockchain to see if the network was jammed.

"We tried our best, did all that was humanly possible to discern between the genuine and fraudulent registrations considering that about 90% of the people who registered to our bounty campaign still doesn’t know what Ether is, not even today"

Contradicting statement. How can they determine that 90% of accounts are fraud and how do they know who knows and doesn't know what Ethereum is?

That whole novel they sent out as an excuse is bullshit. Nothing of it makes sense.

I have run affiliate programs myself in the past - if they can't deal with the technology and/or the cheaters, HOW THE FUCK are they supposed to run a publishing platform with > 100K authors (and all the crap submissions, and the fraudulent readers... and so on...)... JOKE.

They never intended to pay out the bounty (maybe just a couple big joint venture partners), they just:

And the 'free books' will be long forgotten, because even if they build the platform, it won't be online before next year...

I already called there and left a nice message for him.

I understand that sentiment.

Personally I dislike governments even more than scammers and incompetent jokers (errr, wait, gov usually is a subset of that... ) and prefer 'regulation' by 'forced transparency'. Users have way more power than they used to - doxxing, hunting down, taking down of scammers IS possible in many cases, but many in the crypto community are too lazy or are even sympathetic with the scammers.

In this case we have a - partial - success: after they saw an angry mob of crypto nerds with pitchforks would come after them, Authorship sent out an apology yesterday and has - slooooooowly - started to pay out more users. Not resolved yet, but they obviously understood they would not get away so easily...

Update: looks like the spectacular backlash was more than they expected. According to the thread on Bitcointalk they are backpedaling and intend to pay everyone who had not 3 or more signups from the same IP address.

They also deleted that embarrassing rant from their website.

We will see - I have not yet received anything.

after some more knee-jerk arbitrary zig-zagging they announced today the end of the token distribution.

While most of the investors have received their tokens, the whole 'bounty campaign' seems to have been an intentional scam and the majority of users who took part did NOT receive their compensation.

So Authorship.com can be safely categorized as a fraudulent, not trustworthy platform.

Stay away, don't invest, don't promote, don't use is as an author or reader (in case they actually build their publishing platform).

Scammers gotta scam, it is simply not safe there.

Did you get the "final update" email? I haven't received my payout.

Yes, I received and read that abomination of an email. It only showed that they are not just scammy, but incompetent as well (e.g. demanding same IP for sign-up and withdrawal, so clueless).

And no, of course I did not receive my bounty tokens.

BTW - did a quick estimate on the numbers, and they SO don't add up. Approx. 90% of bounty participants have not been paid:

Number of referrals alone from the top 10 referrers that were listed on the Authorship bounty leaderboard: > 4000 (number of accumulated points / 75)

Number of investors according to their own site: 1927

So they just paid a couple folks and joint venture partners and screwed the rest.

probably just paid out their family and friends