The Rai of Yap: An economics lesson from history

localcoinswap (28)in #cryptocurrency • 4 years ago 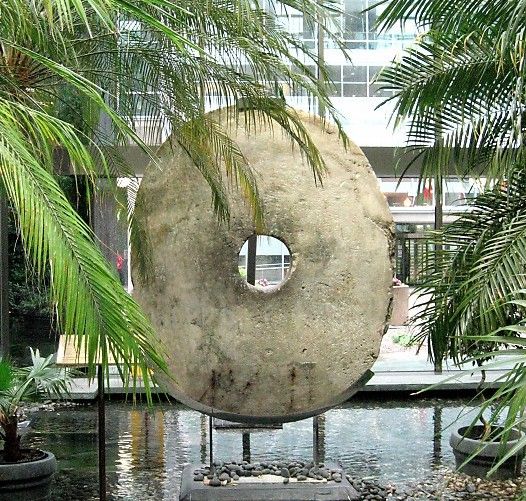 The idea of non-sovereign currency under decentralised ownership sounds pretty innovative - but actually, despite the advanced technology being built into the LocalCoinSwap exchange, there are elements of the concept which have more than stood the test of time. Centuries in fact.

Take for example the unusual coinage still in use on the island of Yap in the Federated States of Micronesia. A tiny isle, but their money is anything but small - the famous Rai stones of Yap have the honor of being the heaviest money in the world. A unique phenomenon of this isolated community, the Rai date from the early 19th century - but can teach us a lot about what money really means in 2018.

Mined from aragonite limestone in neighboring islands, the circular stones, which weigh over 7 tons in some cases, represent highly visible proof-of-work. It is thought that at first small stone disks were interchangeable with disks of polished shell, a few centimeters across - but over time increased via inflationary influences, to the vast megaliths still seen all over the island. For a population who did not have access to precious metals in their environment, these iconic stones were the perfect indisputable store of wealth.

Imagine the effort required, to mine these vast stones and work them into a polished circular shape using hand-made tools, then transport them back over the ocean from a location with which the Yap were frequently in conflict. What value would accrue, to those who had the largest stones parked proudly outside their hut?

However whilst being a fabulous show of wealth and status, the vast rocks did lack a degree of portability and fungibility - both important features of a viable currency. Being simply too large to move around on a regular basis, this could have created a real problem…

But the Yapese addressed this challenge ingeniously, by developing what appears to be the first distributed ledger - a shared oral history of ownership. Buying an item with a stone, or part of a stone, simply required that the whole community agreed that the exchange had taken place - so it wasn’t required to physically move or break up the stone in order to validate the transaction. It stayed right where it was, everybody just knew and understood that it’s ownership had changed.

This consensus was reached through the shared interests of the community, and in the absence of a blockchain database the knowledge probably was at least a bit centralized, with some senior elders having the final custodianship of this shared understanding. But it truly was shared and community-owned, because it depended on the entire tribe agreeing about the status of ownership of each asset at any given time. And it worked. As in many pre-literate communities, oral history was an established art form, and the provenance of important stones consisted of a detailed history of ownership and transactions.

Stones acquired value by virtue of size, beauty, and even more from the difficulty of acquisition in the first place - because bringing them back from the site of mining in the Palau islands was fraught with challenges. On at least one occasion an important stone was lost at sea, whilst being transported by canoe and outrigger, so the stone disappeared - but its existence and location were fully known and agreed upon. Hence that stone remained part of the economy, and still today somebody is its current legal owner, even though the rock itself hasn’t been seen for over a century.

It sounds astonishing that an unsophisticated tribal society could develop such an advanced form of economics, when plenty of people in the developed world today have difficulties getting their heads around the idea of cryptocurrencies which only exist in digital form. However when something has a value which is both publicly known and agreed upon it definitely fulfils the key criteria for use as both store and unit of value, and if that value can be used in transactions in a consensual way then it also works perfectly as a means of exchange.

And that goes equally for a vast piece of polished rock in a village on an island in the South Pacific, or a digital currency being peer-to-peer traded on an exchange like LocalCoinSwap.

Despite inflationary pressures during the 20th century with the advent of easier transportation and mining tools, the Rai of Yap still exist, not only in museums worldwide but also in use as a currency today - mainly now for ceremonial transactions, such as cementing alliances through marriage and land transfers. As such this example serves as a vivid illustration of the way different currencies can cheerfully co-exist, serving different needs within the same society. It also points towards a diversified future which does not require an ‘all or nothing’ flip to a crypto-based world - or even one in which a single cryptocurrency dominates and displaces all the others.

The past is inclusive - and so is the future, at LocalCoinSwap. Head on over to a great conversation on Reddit, where we’re crowdsourcing opinion about the coins you want to be prioritised for trading on the exchange when we launch in a few months time… We’re open to most suggestions, but sadly the mighty Rai are non-digitizable.

We’ll have to enjoy their magnificence where they are presently situated - and remember the important lessons they teach us about the economics of the future.

At LocalCoinSwap, we are building a peer-to-peer cryptocurrency exchange that will offer trading on a wide range of crypto assets. Not only will the exchange be distributed, as 100% of the profits from the exchange will go to LCS Cryptoshare holders. Head over to the website to find out more, or follow us on any one of our social media platforms.