hvcrypto (37)in #cryptocurrency • 4 years ago (edited)

A blockchain facilitates secure online transactions. A blockchain is a decentralized and distributed digital ledger that is used to record transactions across many computers so that the record cannot be altered retroactively without the alteration of all subsequent blocks and the collusion of the network. Essentially, what this means is that all computers on the network hold a record of all transactions along the network – which means any fraudulent records “uploaded” to the network would be immediately nullified by the decentralized network. With no central point of failure, blockchain technology ensures that value is recorded with the utmost accuracy, as well as maintaining accessibility even through failures from individual points in the network.

In addition, the BitBay market client enables consumers who are normally unable to access certain markets or economies to engage in business as usual – there is no requirement of a bank account, license, identification, or the hassle of converting foreign currencies. This will enable the mass participation of users, quite literally around the globe, in the current global economy with ease.

The method BitBay uses to ensure these smart contracts are complied to is a clever system called Double Deposit Escrow. Double deposit escrow enables the trustless transactions between two parties. In the simplest terms, one could describe this arbitration system as the “Mexican Standoff” of security. Both parties place a deposit on the transaction as required by the smart contract. Each party has a vested interest in ensuring the transaction goes as detailed by said contract – were either party to disagree with how the deal panned out, both deposits are lost. This, along with the in-client BitBay reputation system, removes the financial incentive to violate the terms of the agreed-upon smart contract. Through double deposit escrow, we remove the need for a middleman (or middlemen) that typically would resolve disputes between parties. 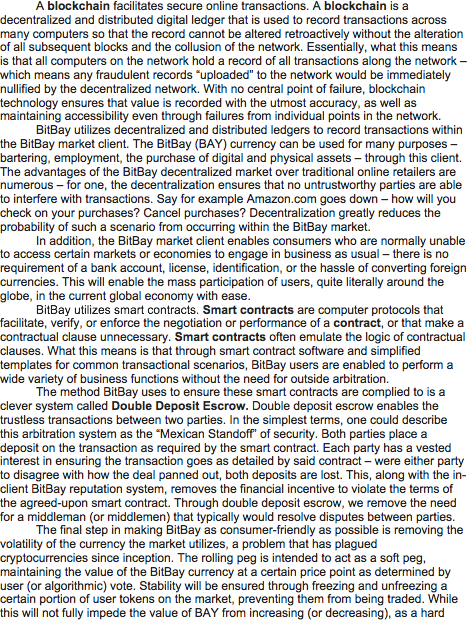 We need a better exchange.

I actually prefer Bittrex over any other exchange, but I do agree, the more exchanges the better. I would imagine if we keep up the trade volume they will have to start to pay attention.

keep up the good work - this coin is not gonna stay this low for long!!

No question. Already starting to hear about it more.

Editor's Note: Steemit won't let me edit this post! I don't know why not though. Sorry for the formatting errors!