Is using trend lines a good way to predict where the market is going to go?

gmichelbkk (66)in #cryptocurrency • 5 years ago (edited)

We are Monday and what I decided to do today is a few day-trading predictions based on using trend lines on the charts. Is using trend lines a good way to predict where the market is going to go? Does that guarantee a winning trade?

I have now Tether (USDT) and I'm using 7 pairs for this exercise that are available on Poloniex. Is using trend lines a good way to predict where the market is going to go?

The altcoins I am going to look at today are Augur, Ethereum, Litecoin, Stellar Lumens, Monero, Ripple and Zcash because they can be traded with Tether.

I am a student of the cryptocurrency trading course and no expert yet! If you are interested to join the course to learn with me and read a more detailed trading journal there, use coupon code "michelsentme" at check out, I will get a small commission and you will get a 20% discount.

I suggest that you scroll down this post slowly and look at the first chart of each section with me and try to predict where it is going to go, then to scroll further down to reveal the actual result. This way you will see if you would have had a winning or losing trade.

This is the chart I had for Augur and as you can see, not a lot of action. I could not draw a trend line on this section of the chart so I drew a base, which can say that it has a 50% chance to go up and a 50% chance to go down. The blue arrow is where I would have entered the trade and started to monitor to see where it went. 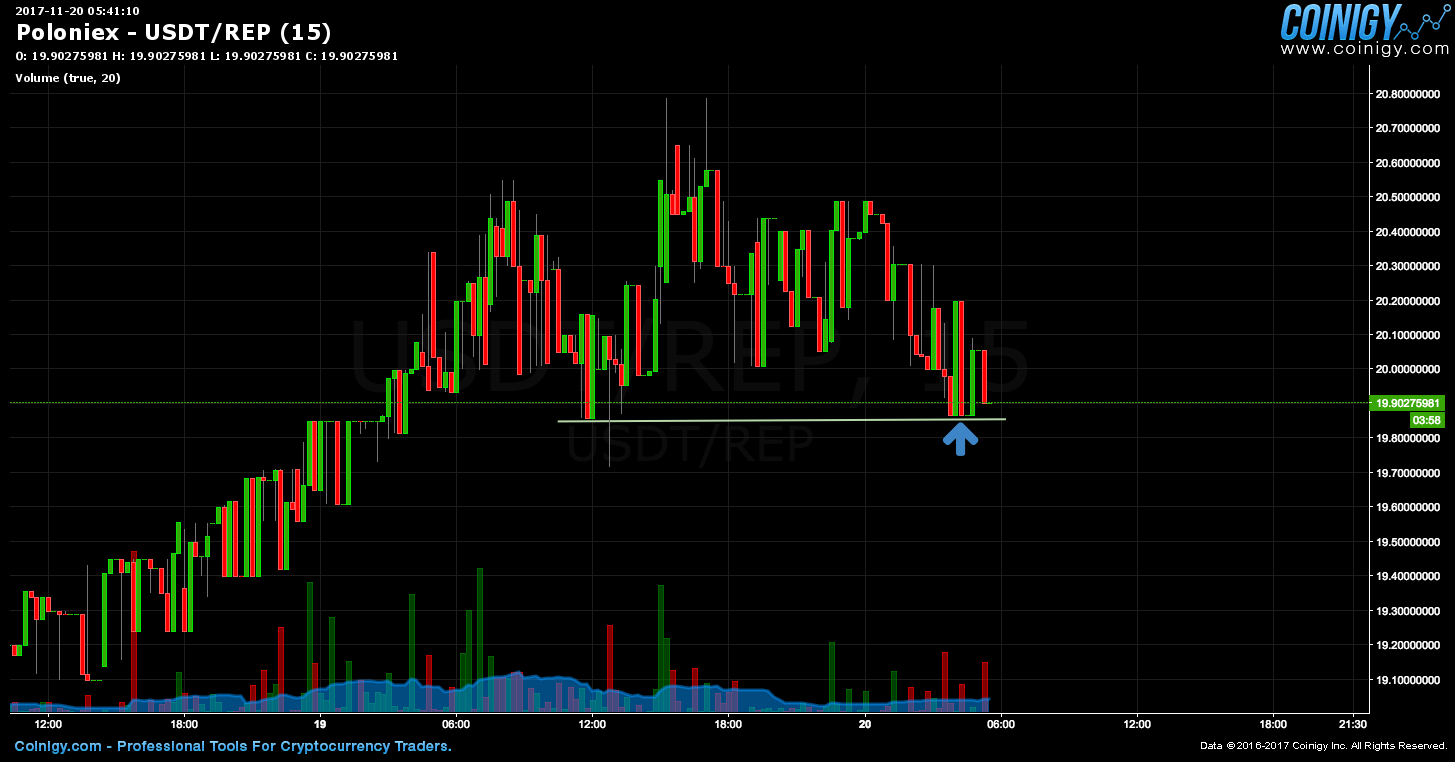 So what do you think, up or down?

30 minutes later there was a very slim indication that it was trending up...

and it went up during the next four hours. This trade would have been profitable providing that I monitor the chart for a minimum of 2 hours.

This is now Ethereum, with a beautiful trend up. When you look at that you can only think of it going further up between these two lines. Is it going to be the case?

The blue arrow is where I would have entered the trade with a 30 minutes monitoring it. 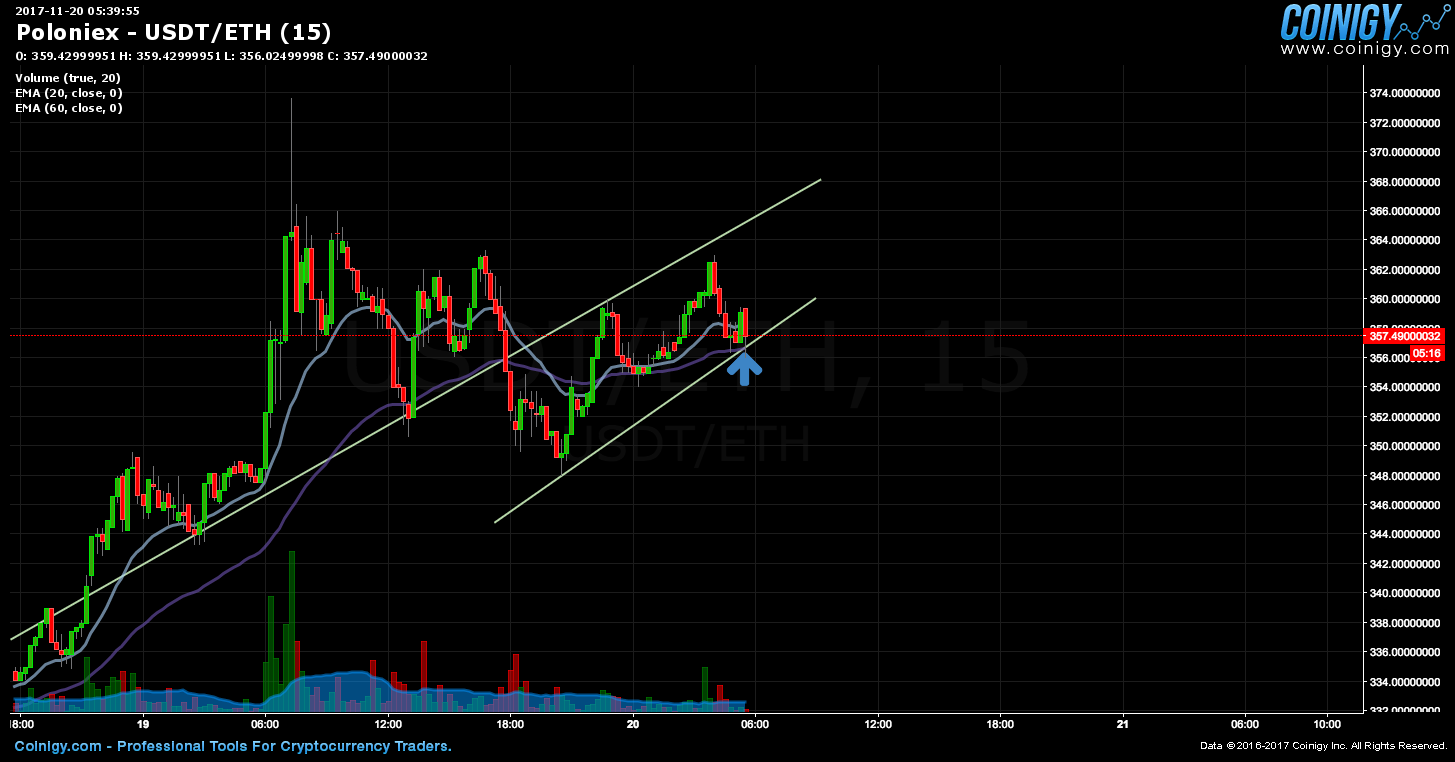 So what did you say? Up or down? I believe you didn't expect that!

30 minutes later it was down and then bounced back up and continued to go up. After four hours this would have been a winning trade with a difficult choice to either exit or stay in the trade at the beginning.

In that case, the beautiful trending line didn't do that much good.


This is now Litecoin, with another beautiful trend up.

The blue arrow is where I would have entered the trade when a candle touched that line, so it can repeat the same bounce as the previous two. The moving averages were indicating the start of a down trend. 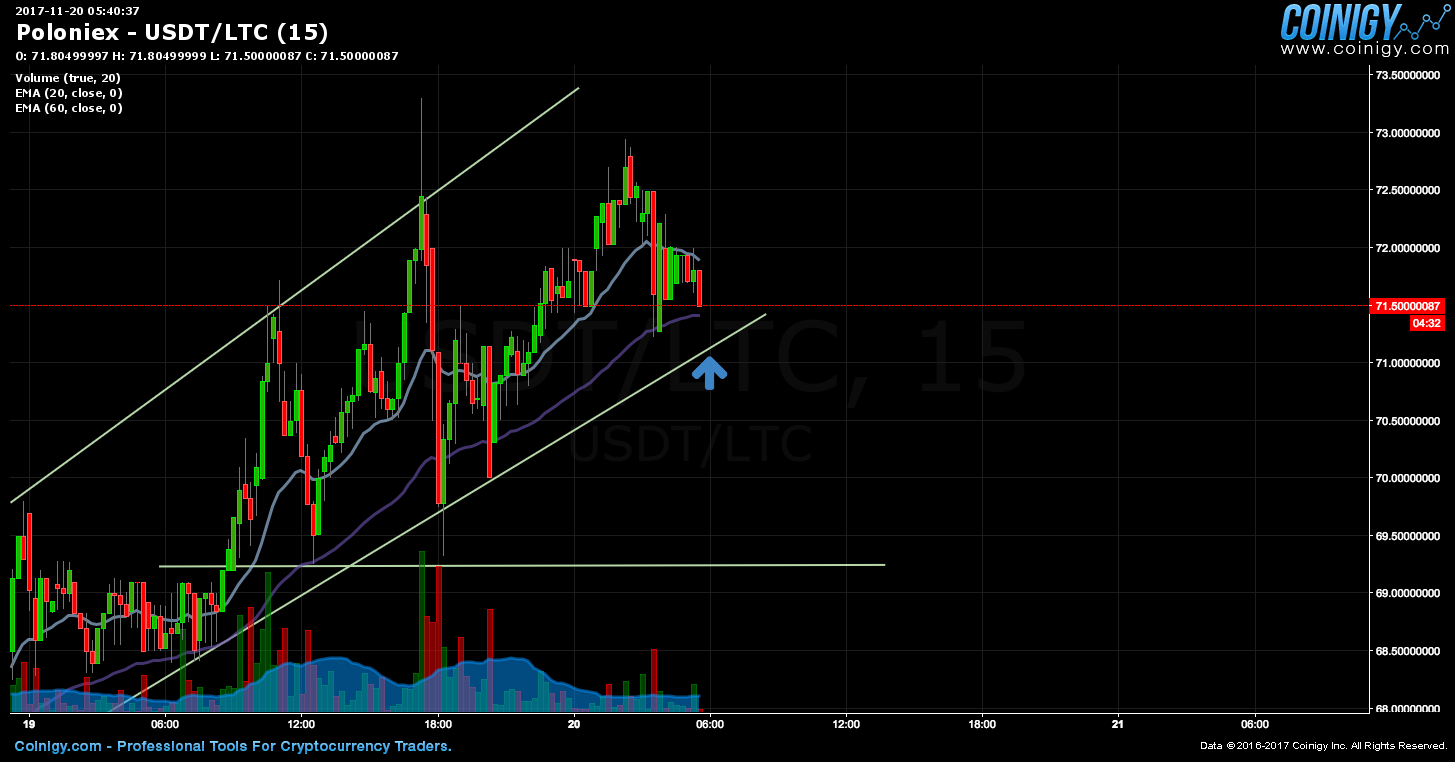 Let's see if a candle touched that line and where it went. The candle touched that line so I would have entered the trade and then it would have been a losing trade.


For some reason, the symbol for Stellar Lumens is STR on Poloniex and XLM on the other exchanges, which is confusing.

This being said, we have 2 trend lines that seem to converge in one point. Is that going to go up until this point and then go down? The moving averages don't say so.

The blue arrow is where I would have entered the trade. It didn't really go to that point of convergence, but still went up at a slower pace. 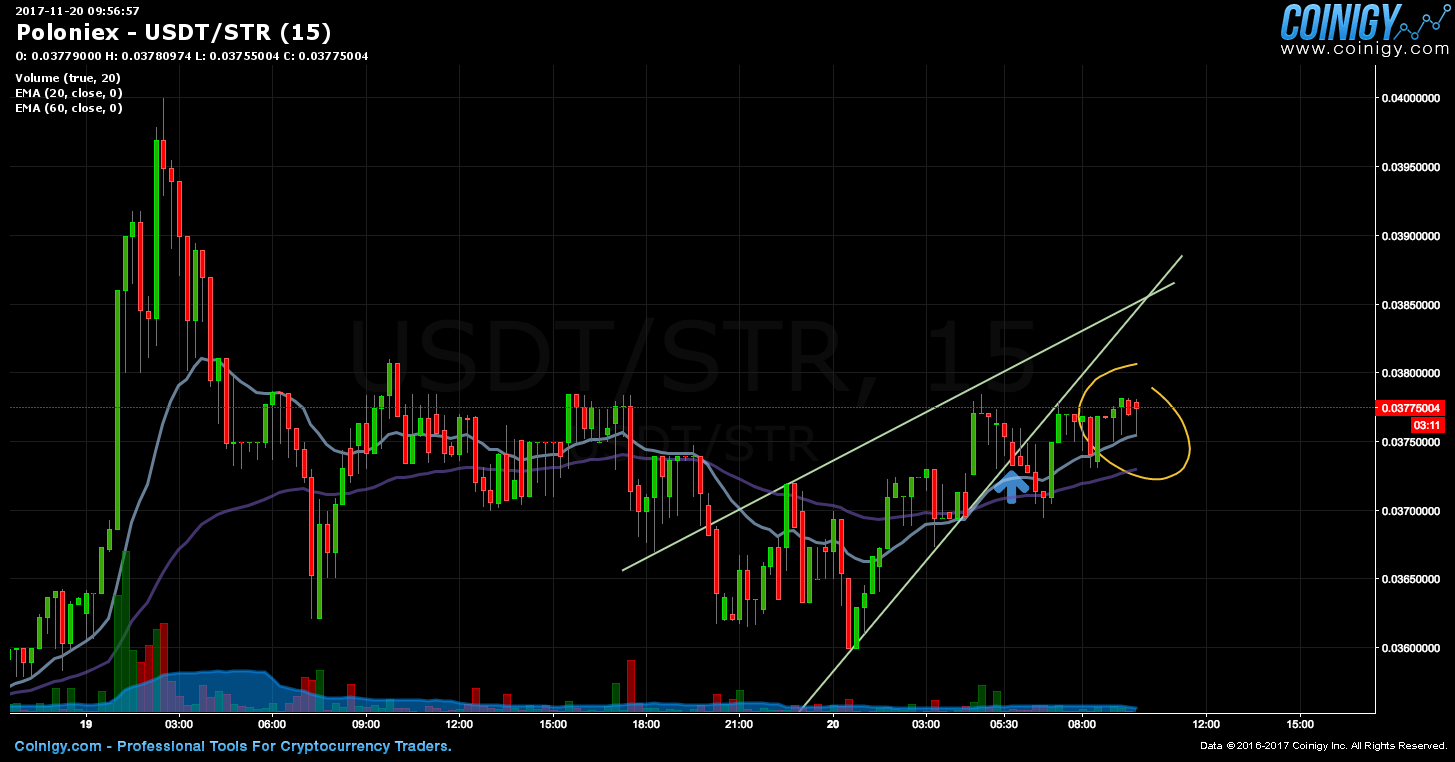 The moving averages were right to indicate a trend up, but not as high as the trend lines would have suggested.

This still would have been a winning trade.


This is another interesting trend up for Monero. Seeing that, I can only think that it's going to go up, but the moving averages indicate that it might not go as high and may go down shortly.

The blue arrow is where I would have entered the trade. Going up or down?
It did go up, but not really within the two trend lines. 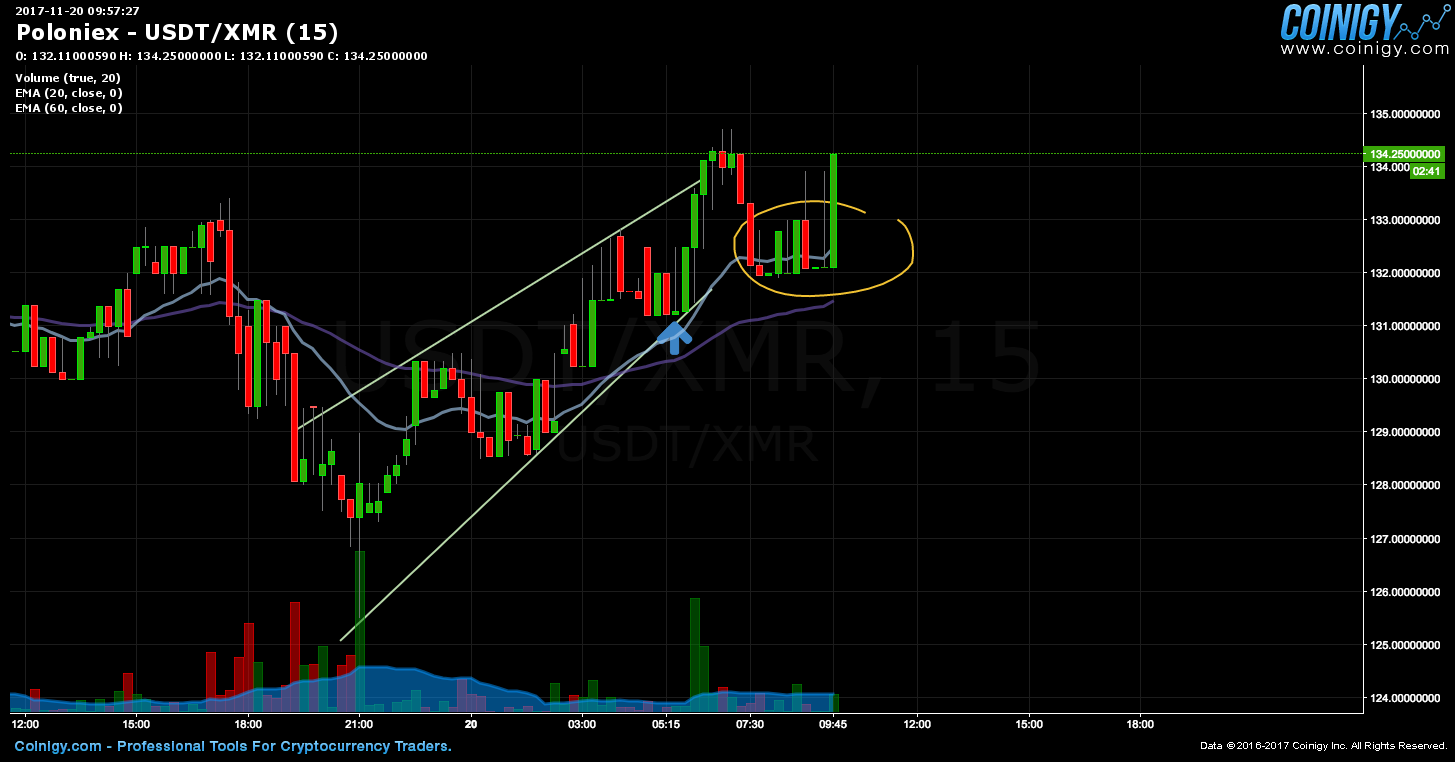 The moving averages were right again indicating a slower trend up, but it seems like it's going to go down soon.

This trade would have been a winning one.


This is a slow, but steady trend up for Ripple that the two trend lines seem to indicate.

Here I thought that the candle would have to touch the trend line for me to enter the trade, where the blue arrow is. The moving averages look good. And this is exactly what happened!
The candle touched the line and it's where I would have entered the trade. 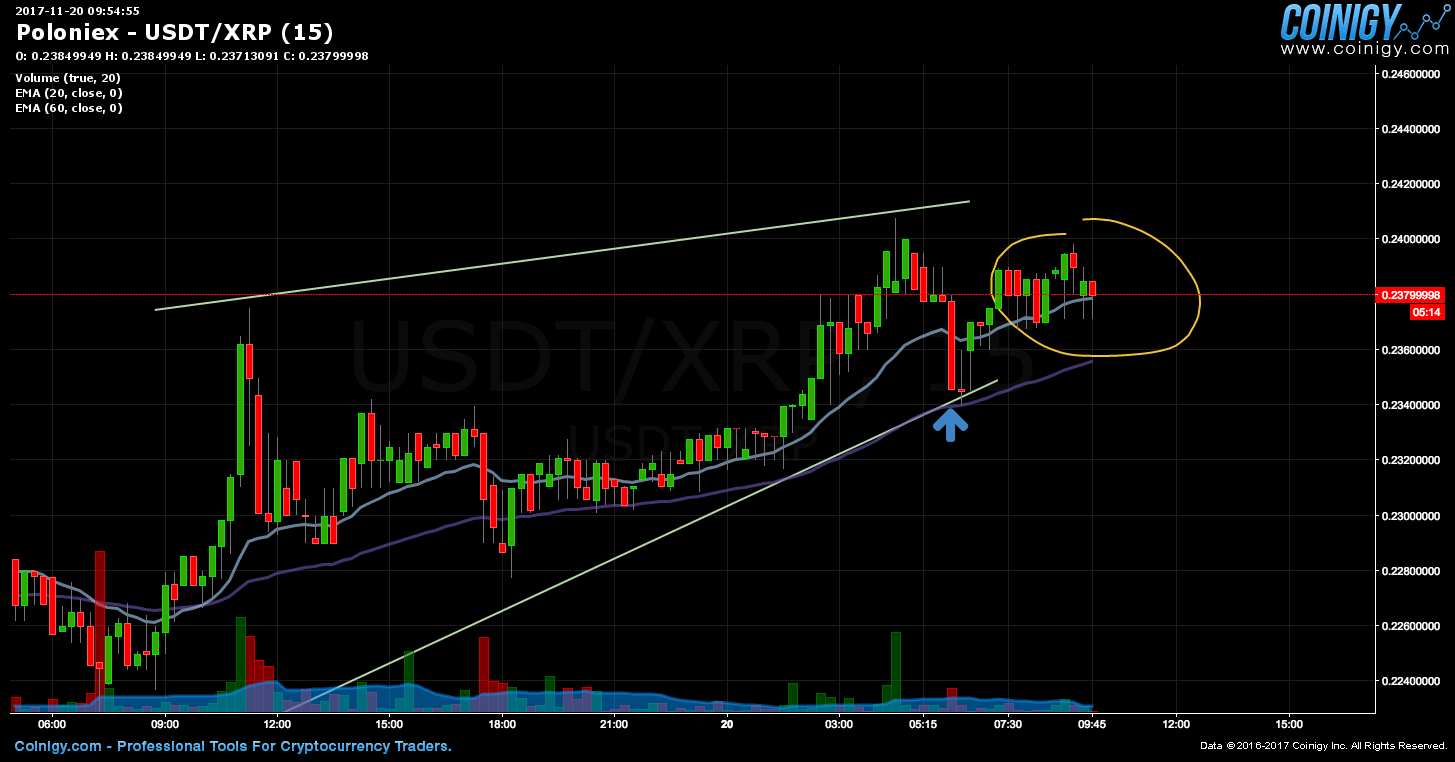 It's going up and up slowly and this would have been a winning trade. There is no sign that it's going to go down as yet.

This does not tell me that the trend is going up for Zcash. The two trend lines suggest it could go up, but I could also have drawn a trend down. I don't think I would have entered the trade because the moving averages indicate it's going down. If I would, it would have been on the blue arrow. Would you have entered that trade?

And here is what happened. 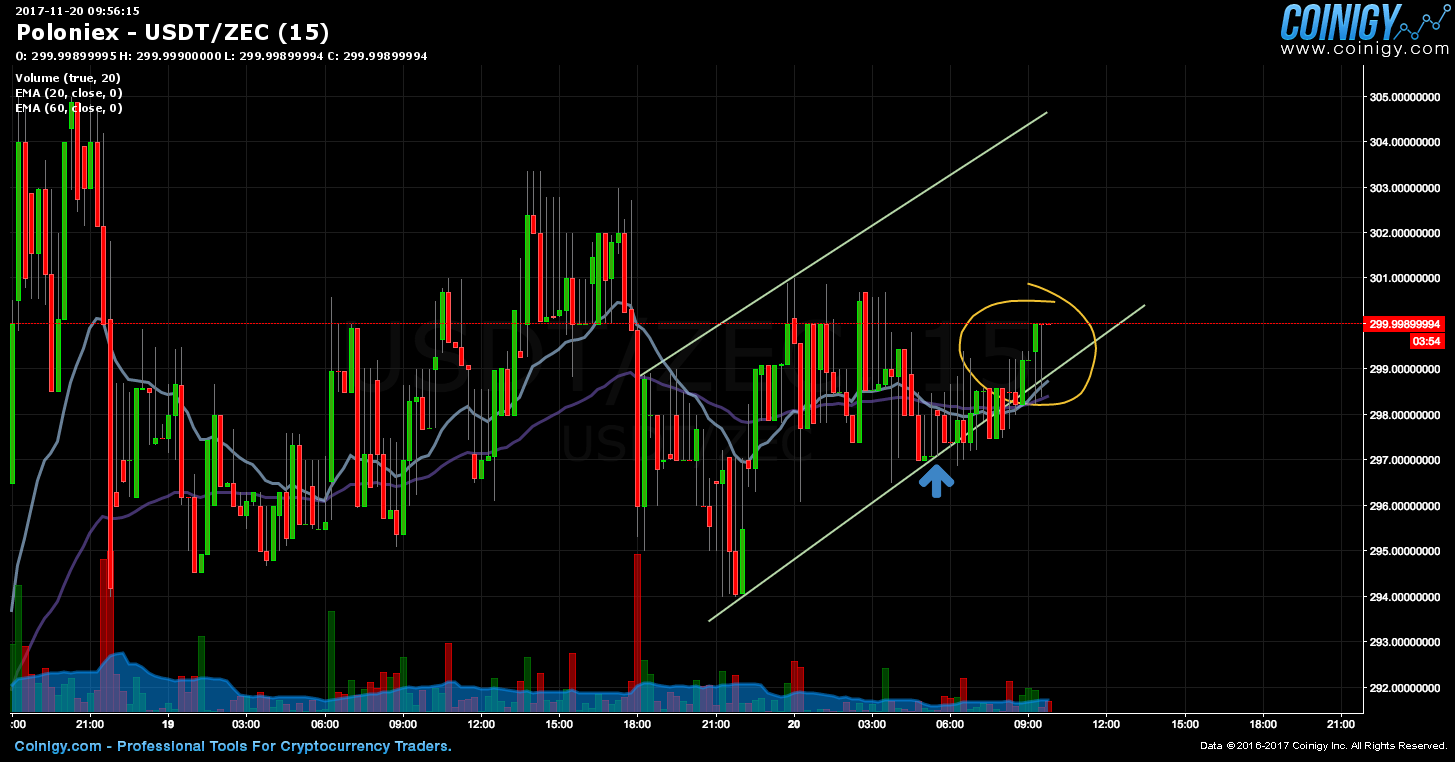 I would have not entered that trade, but if I did, it would have been a winning trade.

What I conclude with this exercise is that trending lines can give a fair indication of where it is going, up or down, but it is more accurate when used with moving averages and close monitoring.

Maybe I will take screenshots tomorrow morning to see where it went and if it's interesting I will make a follow-up blog post.

I hope this is helpful for you.

This post has received gratitude of 5.00 % from @appreciator thanks to @gmichelbkk.