evilmonkey (54)in #cryptocurrency • 4 years ago

Wabi coin. It is not Walton 2.0 that much is clear but I think it is a well lain out ICO that is worth a quick flip.

Getting lots of PM's and see lots of talk about Wabi.

I haven't really looked at many ICO's for ages as there has been slim pickings lately.

But people keep pestering me and I kind of said in public I would review it so here goes.

Please note I have not dug super deep into this one so it will require your own research and fact checking.
I have done some basic checking for scam warnings and background on the team members and found nothing concerning.

Low cap of 11-15 mill. ICO price will be 25 cents. So I assume the bonus for the pre ICO people will come out of the bounty.

There is a white list which is now closed and a token limit per person, that doubles daily until its all gone, with proper professional KYC. You couldn't really ask for a better structure. The only real concern is the 30% held back for customers to mine. I think it works a bit like Iota, where you scan one transaction with your phone it then mines two more so the blockchain is always moving. Though this seems pretty fair and reasonable if that is the only way they can be released.

What problem are they solving?

The idea is also very sound and they have been working on it and have a working product for a while. There is so many fake foods over there, and additives being added to foods that are pretty much just poisons. You can get Fake Raw eggs and there is massive amounts of social media around these fake products.

My wife is Chinese and whenever we go back we take two extra suitcases full of food products for our kids so we know what they are eating 100% of the time.

There is food you can trust over there and my kids eat that, but the kid related products are things I stay away from.

They also have other stores with purely imported foods and we could find foods from New Zealand there that we trust and I would be able to spot if they were fakes. But was cheaper to take it ourselves.

We also took a whole suitecase of baby formula for friends and family.

So their is huge demand for something like this in the market. Like fanatical level demand. To the point we even shipped huge amounts of baby formula over there at one stage. the Government and supermarkets in my country clamped down and you were limited to only 2 cans per shopping trip as supermarkets were selling out.

There is already alternatives like I said previously. You just go to these very expensive stores and buy these imported legitimate goods. Not a chance they are fake as the company would go out of business at any sign of scandal. I have shopped in them myself and know all the brands well.

Competition - Do your own research into the competition. I will just list them and some may not even be that similar or competition.

Plus already existing goods stores in china which means you can just go there and spend real money. They are targeting the rich though. I think wabi is more aimed at the poor and middle class who also want reassurance products are not fake.

There is also other competition tokens out there. Some of them have been out there for ages and they really didn't grab my attention.

Here is an image I found somewhere on the net, draw your own conclusions. I think Wabi is better at grabbing attention than all of those listed above as they mostly have no vision. There is demand for Wabi right NOW. Walton already has some big manufacturer agreements but it hasn't really done anything with them or doesn't really know what it plans to do. The thing is it could just easily copy Wabi and steal the idea. Those deals don't stop Wabi dealing with these other companies and are not any kind of official partnerships.

I can't fault anything to do with the ICO structure, its really good.

The actual token usage. I can see the need for the blockchain to keep the security of the product intact. A practical and useful use of the token. What I don't like is the reason to hold the token. While I like their products I still want to be able to buy my stuff with cash and not have to go to a specialty store. It seems a bit to narrowly focused. Customers can get 5% rewards, but why buy the wabi token in ICO the first place and how does it appreciate? I guess by demand is how the price grows.

I don't want to have to buy wabi to buy products. They could have some up with a much better reason to hold the token. As long as it goes up in price as demand to buy the product grows then I guess it could be an ok investment longer term.

The team is small and there is no superstars but they don't really need it to be overly complicated. They do need a superstar or someone with power to market this product and get customers interested in using it. They do have some team members in the infant formula arena that could be useful.

Competitors could easily copy and overtake wabi with a much better model. I could see Walton coin with its existing tech and contacts easily coming up with a better model.

The token system kind of limits its future expansion and may even limit its consumer base. But crazy mums will actually do anything for their kids.

They also don't provide any financials so its hard to really verify if there is a demand for their products or not. I am not sure how to check how many have downloaded the app, the android version doesn't show many downloads.

They don't really explain what the funds are for from the ICO. Why do they need them and what will they use them for.

Not much technical details. Which brings me to concerns about RFID security. In the past they have been easily hacked. There is less and more secure versions. They don't really give you the details.

In this case I am to that sure it matters as the labels are put on during manufacturing. At this point they are secure. They are then home delivered or sent to trusted stores. The fake foods industry generally effects the poor areas. If they were hackable it would likely only be in a sense that someone could copy an existing label and put it on another item. Whichever item got scanned first, either the real or the fake would show as legitimate. The thing is the hacker would also need to be able to create a really good fake label. It seems like a lot of effort. First, create a fake product with labels, learn how to hack the RFID, create a fake Wabi Label then find a way to sell the product that wasn't dodgy all before the legit product got scanned.

Also once the second label was scanned the flaw in the supply chain would be exposed.

Already established and working product as well as partnerships though it is still pretty small.

They have a clear vision of what they want to do with their product and they are not over reaching. Though I also see this as a negative in some ways.
They are also linked to alcohol as well which is very big in China (as everywhere). And they plan to expand to medical.

Buying through tokens may actually be a positive. As long as there is a way to convert fiat to Wabi easily, like through a credit card or even seamlessly so customers can always just shop in Fiat. The delivery to your home is also really nice.

They have been working on it for a long time and the Road map is kind of vague. 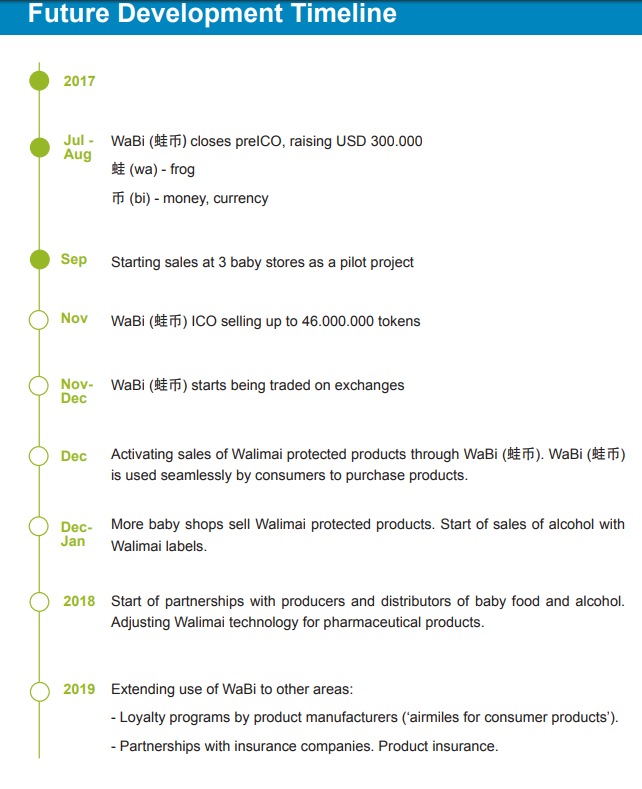 I think Wabi looks pretty good for a short term flick. There is stacks of buzz on social media platforms about it and people are calling it WTC 2.0. It is a very small Market cap and difficult for whales to get a foot hold on there. So you know no one will likely be dumping for under the ICO price. The price may rise during December and then possibly through to January if customer demand is high.

Medium or long term. Again it looks ok depending on the kind of deals/partners they can accquire and customer demand.

China is crazy big and this kind of thing could do well. I think it is limited to countries similar to China. As it would just not be required in New Zealand or Australia s the Government already has crazy checks and balances in place.

Depending on how big the cap per person is ( I guess that depends on how many pass KYC) it is probably worth putting a few Eth into it (you can use several coins to join not just ETH).

There is also a lot of technical details missing which I really, really enjoy reading. Though like I said previously I did not dig that deep into this ICO so they may have released that info somewhere and I just didn't find it.

I won't be investing as I have no money! But I can't see this one breaking the bank and the structure and buzz is good enough that I don't see risk as high. Their vision is a bit limited and they don't provide enough details.

Lookng at the KYC applications you are likely to get 1-3 eth max as an investment which almost makes it not worth it.

But for small fish any profit is worth it.

This post is upvoted by Polsza for 49 %.
If you want help us growing upvote this comment.
Thanks !

The @OriginalWorks bot has determined this post by @evilmonkey to be original material and upvoted(1.5%) it!

This post has received a 0.73 % upvote from @booster thanks to: @evilmonkey.

Always good to see how much work you put in to these reviews. Your personal experience is a good touch. Personally, one to avoid for me. As you hinted, this doesn't need to be tokenised. Doesn't mean it won't be a positive Roi given all the ICO hype but I'm sticking with firmer projects.

Great article buddy! learning how to write a post on your pieces m8 ! :)

I'm sharing with you a prediction - based astrology (astro finance) to @Wabi covering period until December 2018... very exciting future.