PARAGON COIN OR THE SMOKE.NETWORK? 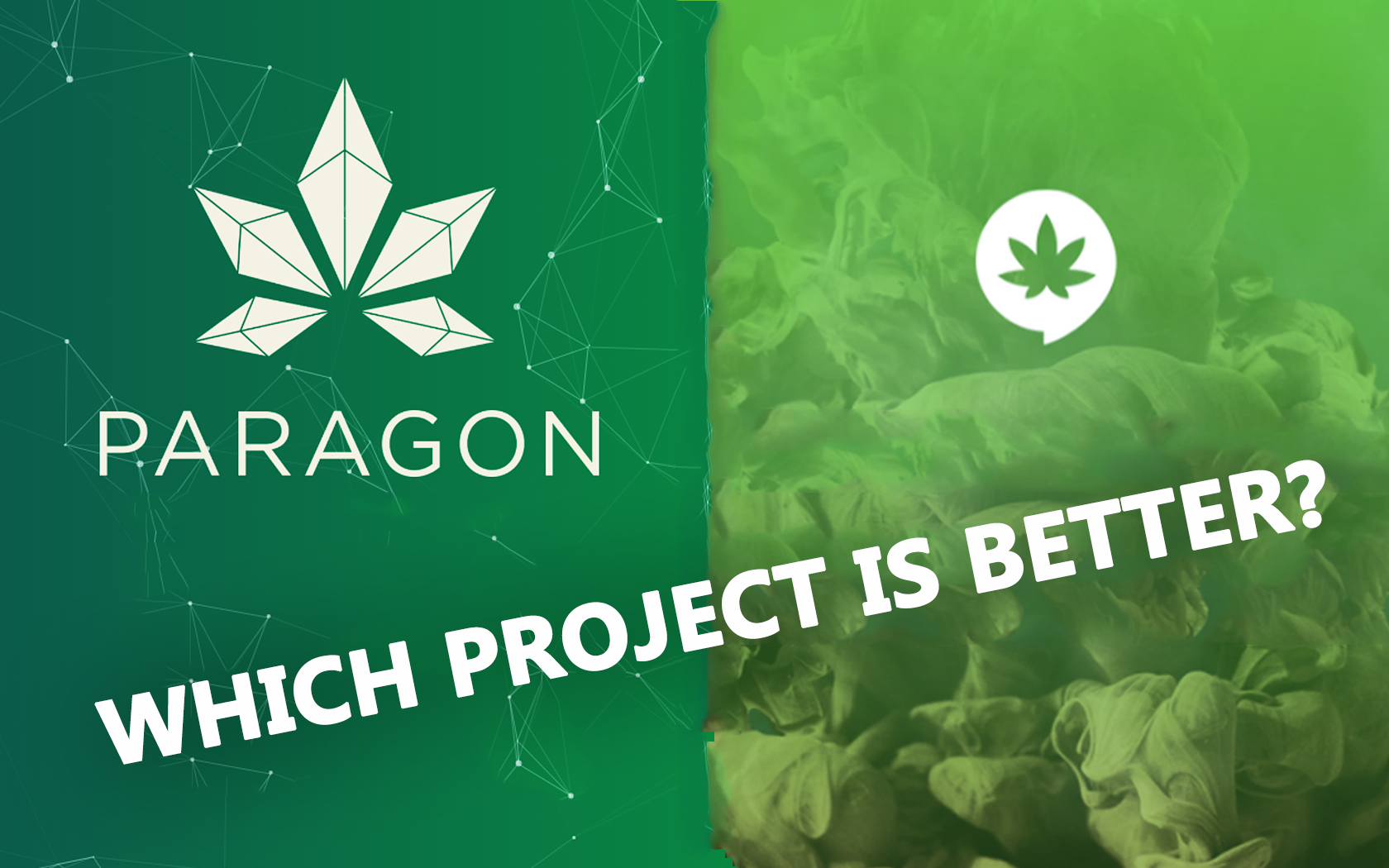 Actually it was never a fight. You can't compare the incomparable! Both of these projects are trying to do something different, but only the main ingredient is the same - cannabis.

Smoke.Network is a combination of blockchain and social networking like steemit, where the platform reward users for posting and curating content about strains.

On the other hand, Paragon is working towards a full legalization of cannabis. They would like to bring verification and stability into this industry. They would also like to create a chain of high tech ParagonCoin centers that would not only work as a coworking space between many industries and professions, but much more!

I am personally not a fan of cannabis or drugs in general. I don't even smoke cigarettes. The whole point of this post is a little bit different. Both of these projects are really able to bring completely new people into the world of cryptocurrency!

Have you seen who is promoting these projects? Paragon Coin has a rapper The Game in their advisory team. The Game has over 1M twitter followers and over 1.3M subscribers on youtube. His other social medias are doing awesome too. This kind of reach is really wonderful to see and The Game is actually not the only one really talented in the paragon advisory board. 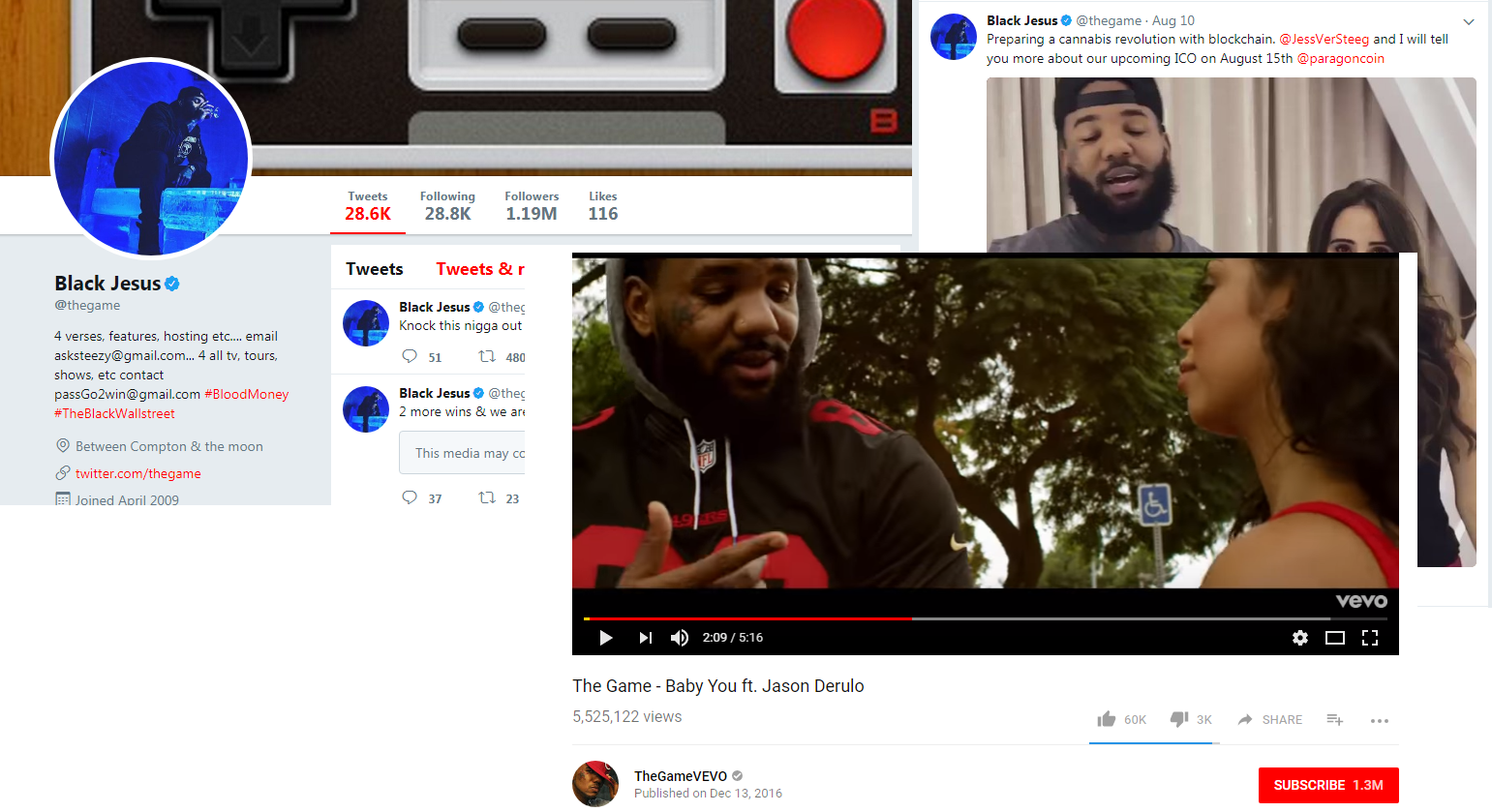 Both of these projects promotes not only cryptocurrencies, but steemit too. Paragon Coin used steemit as the site with "the best practices" and the whole Smoke.Network will be build on EOS.

What is great too is that you can buy Smoke.Network smoke tokens on the BitShares dex! (https://bitshares.org/wallet/#/market/SMOKE_BTS)

WhaleShares community also made some promotion arts for the Smoke.Network for their facebook site. Yesterday one really interesting thing happened. I am not sure if you know Raekwon, but he is also a rapper and as you can see he also has a huge following on his twitter account. He tweeted not only about Smoke.Network and Paragon Coin, but also tagged Snoop Dogg and Bitcoin!

It was later retweeted by The Game too! 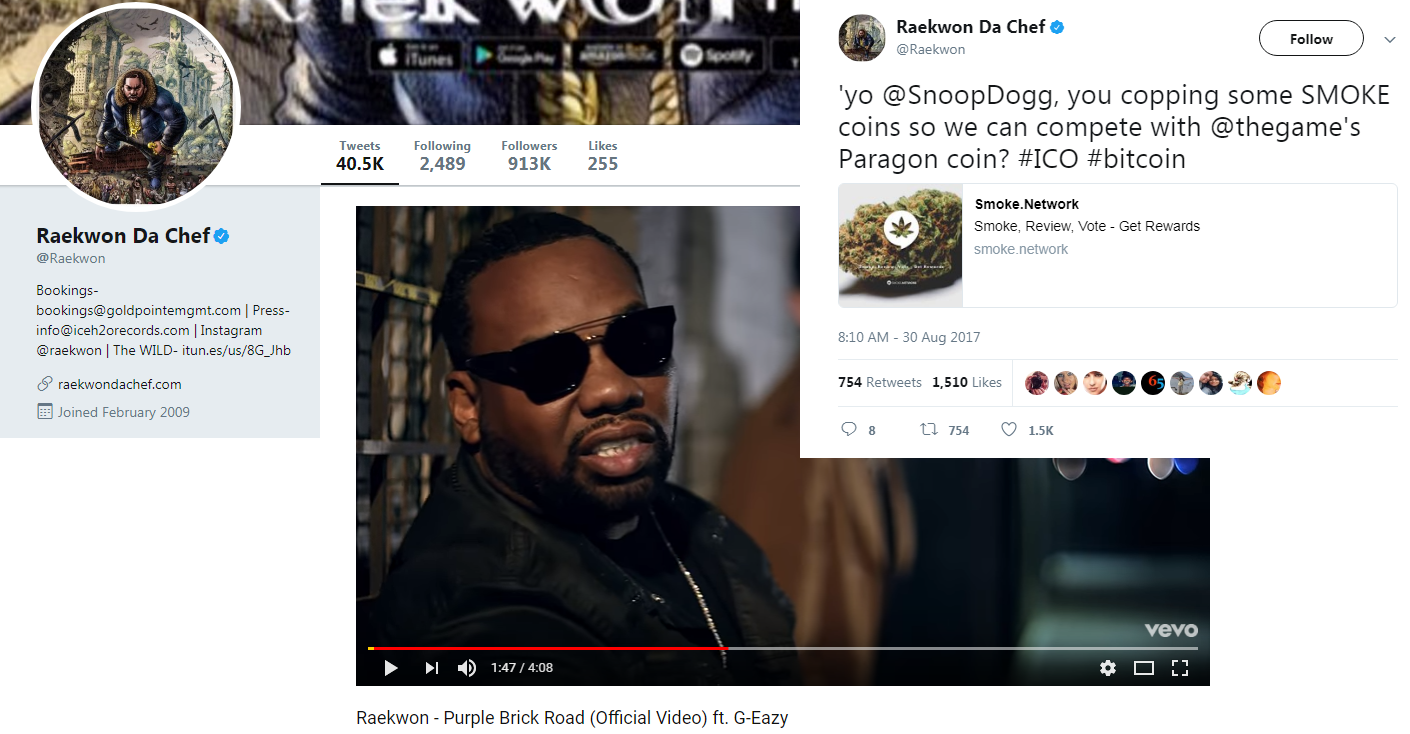 Having Raekwon behind the Smoke.Network would be insane and I can't even think what would happen if Snoop Dogg would join this initiative too!

You can think whatever you want about these projects, but having influencers that are really immersed into it and promote cryptocurency world can really be an eye-opener for some people.

And imagine people like Snoop Dogg or The Game joining steemit, people would go insane! Maybe we should tweet them and show them some support from the steemit community! :)

Such a nice write up. Thank you. I am glad you, and many, are understanding the scope of these two projects are completely different and both can thrive and succeed and help each other out. Good job.

Good luck to you guys! I am having smoke tokens ready for the lift off! :)

Great article shows that the crypto space is growing positively

My dad just asked me if i know something about cryptocurencys? Guys it is happening!!!! #acceptingthetechnology

I tried to post my legal weed products that I get in my state on here to get rewarded, I tried to use steemit like I would use Smoke.Network because its the same..lol Basically I feel like steemit's weed or cannabis section could already be bigger if more people posted.. Paragon this is cool though, and very unique. But I play a game called Paragon for Ps4 and PC..haha I was like dang they ripped that name brah.

Yeah, you could actually use both networks for double exposure!

Yes, regardless of if you are into weed or not this is a big deal and if snoop dog gets involved its gonna be crazy successful for anyone who gets in early.
Really well done post, good points and great insight for anyone who didn't know yet.

i plan to do a post regarding the medicinal benefits of cannibus and CBD's soon. Just have to get the time to write it up. Maybe that will help get attention.

as cool as cool can be, that's a cool thing!

Interesting article , will like to check it out, by the way i followed and upvoted