effectai (44)in #cryptocurrency • 3 years ago (edited) 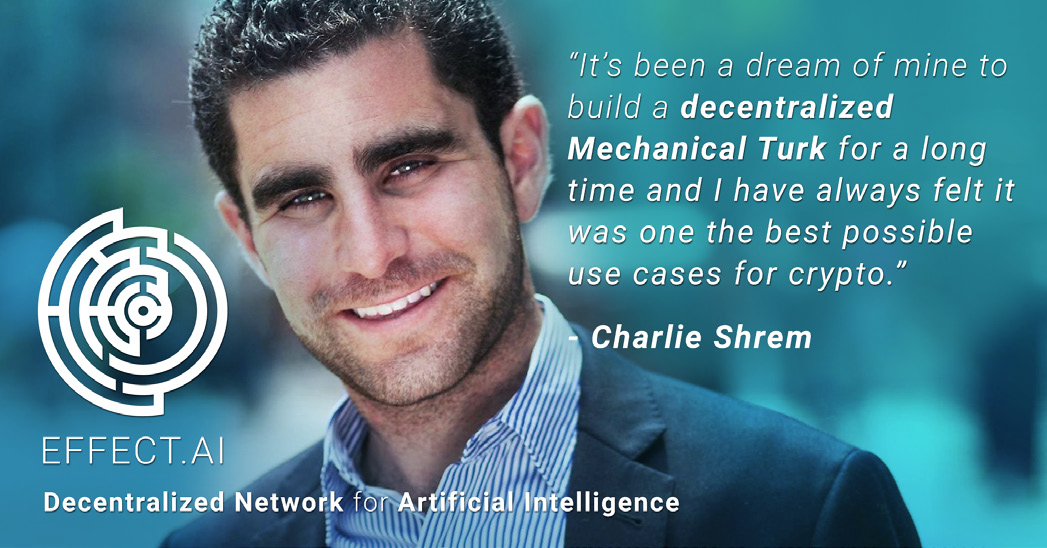 Charlie Shrem, one of the earliest advocates of Bitcoin and BitInstant co-founder, has joined Effect.AI as an advisor.

When it comes to influential thinkers in the cryptocurrency space, few have left a bigger mark than Brooklyn born and raised entrepreneur Charlie Shrem. Back when Bitcoin was still in its infancy, Charlie co-founded BitInstant, one of the first places where users could exchange Bitcoin for traditional funds. Now 28, Charlie’s considerable experience with cryptocurrency, its key players and its opportunities make him an invaluable asset for any project that’s out to make a name for itself in the realm of blockchain.

Effect.AI is an Amsterdam-based project that is working on a decentralized network for Artificial Intelligence and AI related services on the NEO blockchain. It was when Effect.AI announced its plans for the network’s first phase, the Effect Mechanical Turk, that Charlie Shrem became interested in joining the project. Charlie on joining Effect.AI: “It’s been a dream of mine to build a decentralized Mechanical Turk for a long time and I have always felt it was one the best possible use cases for crypto. Effect.AI is working hard to make this dream a reality and I’m very excited to have joined the team.”

Charlie Shrem’s added value to Effect.AI cannot be overstated. As an advisor, Charlie will 1. leverage his know-how to aid Effect.AI in creating a resilient, lasting and open platform for AI development and 2. assist in the acquisition of strategic partners that will make that possible. Charlie will meet with key members of the team twice a week to discuss progress on current objectives and propose alterations if necessary.

Effect.AI’s Whitelist registration will open on Wednesday February 28 at 9AM Central European Time (find your time zone here). Starting at 9AM on Wednesday, you will be able to sign up for the Whitelist by visiting the Effect.AI website. The process will be explained in detail there. Effect.AI’s Telegram users will get a head start on signing up for the Whitelist. Be sure to join the Telegram channel.

Charlie Shrem is no lightweight in the crypto world. One of the pioneers!

This project appears to be in good hands

Charlie Shrem is one of the most known persons on this field! He has been present in cryptocurrency from the beginning, will certainly be a valuable advisor for Effect AI!
Each day goes by I have more conviction that Effect AI will be one of the top projects launched in 2018.

OMG! this is the same Charlie Shrem from Bitcoin Foundation and Jaxx!!!
This is unthinkable! how did you do it?

From the quote it looks like Charlie wanted it :D

Superb! This is why the CEO said that they will wait until the last moment, clearly shows how important patience is in this world. It's clear that the advisors are not only with Effect cause of the show but giving valuable support. All of the decisions were professional so far. Charlie actually answered questions you wouldn't see elsewehere on telegram, this is what transparency is.

This was great right? Most projects advisors are only photos on the webpage, but Charlie showed up on Effect telegram channel and was answering questions. That is the main reason I love finding great blockchain projects and be part of them.

charlie shrem...such a great name joined a great project, i think it's going to blast off soon

Charlie Shrem brings lot of value to the table and he is one of the prominent professional in crypto space. Effect.ai team is getting more and more stronger day by day and the project is shaping up nicely. With advisers like Charlie Effect.ai Project will be able to scale up rapidly. Cheers

Your project is strong, team is strong, advisers are strong.
Charlie is an industry veteran and he is only making your project stronger! Excited for the public sale :)

SO EXCITING!! Great news for Effect AI and the community!!

This is looking very promising. It helps having an important advisor and adds more credibility to the ICO. Now I just need to make it onto the whitelist.

Effect.ai will be one of the successful blockchain projects with well-known advisor such as Charlie Shrem.

Oh yes! Legendary man is coming to the team, good job guys! I really hope that he will contribute with his knowledge to the project!

Charlie is one of the most valueable advisors you can get! He has a lot of connections and influence in the crypto community. This man ride all the bad and good things in crypto train. He suffered a lot and he did a lot for community. Good job done by Effect.AI team

The team is growing and developing rapidly. The appearance in the team of Charlie Shrem tells us about the great success of the project.

I will join to Effect.AI’s Whitelist registration !

Congrats on having known guy and getting him as an advisor. Such an idea is truly known to increase it's awareness of your company.

Congratulations Effect.AI for the integration as advisor to Charlie Shrem! Undoubtedly, he will add value to the project, greater confidence for the investors, all the actors are important, and shows how robust a project can be. All these elements improve the rating of the ICOs.

Effect.AI moves forward with leaps and bounds in the acceptance of the public for the good development of its Token Sale.
Please, keep us updated
Cheers!

Great to get such a man!

I'm happy to see a figure like Charlie on board the team. It's an asset to have him be a part of a space that he himself really believes in and has built, created so much progress since the beginning.

This is great news! Quite an influential man Charlie Shrem. I hope he will do a lot of useful for the project. I believe in you!

Charlie Shem has a comprehensive understading of the cryptocurrency ecosystem and therefore is ais a great addition to the EFFECT AI team. This is a very interesting project, built on a great platform. keep up the good work #NEO #EFFECTAI

This news has greatly pleased me! Congratulations to all who have invested money in this project. I invested a small part, but after this news I will buy more tokens. Experienced people involved in project development are always additional guarantees for investors.

This is an hype project because it is NEO base blockchain but with this type of news make it more valuable than interesting.

Charlie Shrem brings lot of value to the table and he is one of the prominent professional in crypto space. Effect.ai team is getting more and more stronger day by day and the project is shaping up nicely. With advisers like Charlie Effect.ai Project will be able to scale up rapidly. Cheers

Super cool news! Charlie is one of the most valueable advisors you can get! He has a lot of connections and influence in the crypto community.

OMG so great ! Charlie is the most valueable advisors ! A good and promising project that deserves investors ' attention. This project will be a successfull one :) good luck

Everyone mentioning how great it is that Charlie joined the team.
I think it's important to point out that this is particularly great because this is something Charlie has wanted to do! He's definitely going to give it all.

That's super-exciting news. Crypto pioneers are heading towards effect.ai which is super good news for the team as well as for the supporters and community. Project is definitely heading in a right direction.

That's some great news. Hopefully he will add some more value to the project as an advisor. I am personally interested in AI. Including "blockchain" and "NEO", Effect.AI makes me thrilled.

Charlie is one of the most known people in bitcoin community. And with his help progject is going to grow faster from my point of view. This person knows how to deal with money. That's why I'm waiting tomorrow to join white list))

I have review $DBC and $EFT(effect.ai), and i am very excited about $EFT now. As a AI enginner, i look forward to a AI ecology that can benifit people like me. When it complish targets, i would able to work at home, and earn even more. For example, i can write a script to get data, train and deploy an AI model, then another people who need it would pay for me for using it. I hope Effect.AI would make great success, and i believe it will. My experience make me feel its great future and i will continue watch Effect.AI.

Charlie Shrem is a blockchain and cryptocurrency heavyweight. You can be sure that something is legitimate if he is willing to attach his name to it.

It's good that you are represented in different social networks. In the telegram it is always convenient to follow the news, joined the channel!

I read about Charlie shrem..He is really an influential person in the cryptocurrency world 😍😍😍 Great concept with Great Team. wow that was amazingi can't Imagine guys😍..this will be my best investment Never loss this chance

Effect.Ai is strong ICO. with the great advisory board. The project will land on the great achievements. Regular progression of the project give us the hope that we are at right place.

This is going to be breathtaking news for the community. Charlie Shrem is a geek in the field and there no need of any other proofs than he success of Bitcoin which has been the leader since the beginning till now in the crypto field.

I liked this project, Great Effect Team !. Their Law Team, Management members, Advisory Board and many other staff members are doing their job very well. Good luck

Great news, finally last red flag has been broken. And nothing stop me to invest in Effect.AI

wow, this is indeed a big news. The team is getting bigger and stronger each day. i m eagerly waiting for the ICO. Good luck with the project.

Congratulations on the project Effect with the replenishment of the team. Charlie Schrem is a very respected person in the Crypto community, who rarely becomes a project consultant! This news undoubtedly brings a huge positive effect to the project! I'm glad that I'm with you!

known man in the right place, I think it will bring a big progress for the project. We're glad to see Charlie Shrem in Effect.AI

When people like Charlie Shrem join the project, it's easy to understand how serious and ambitious this project is.

Good news! Recently watched "The Rise and Rise of Bitcoin" movie with Charlie. He made a lot for cryptocurrency in the beginning. Big man!

This news is awesome.More people will enroll with Effect because of the new team member. charlie shrem has a good view of crypto.This is good chance to effect team