Morning research into if AMAZON will be getting down with BITCOIN or CRYPTO.....

diggerdugg (54)in #cryptocurrency • 5 years ago
So I have come across a few articles an stories from people linking Amazon and Bitcoin in the same headings....
I decided to divulge into this a little further and this is what I came up with: 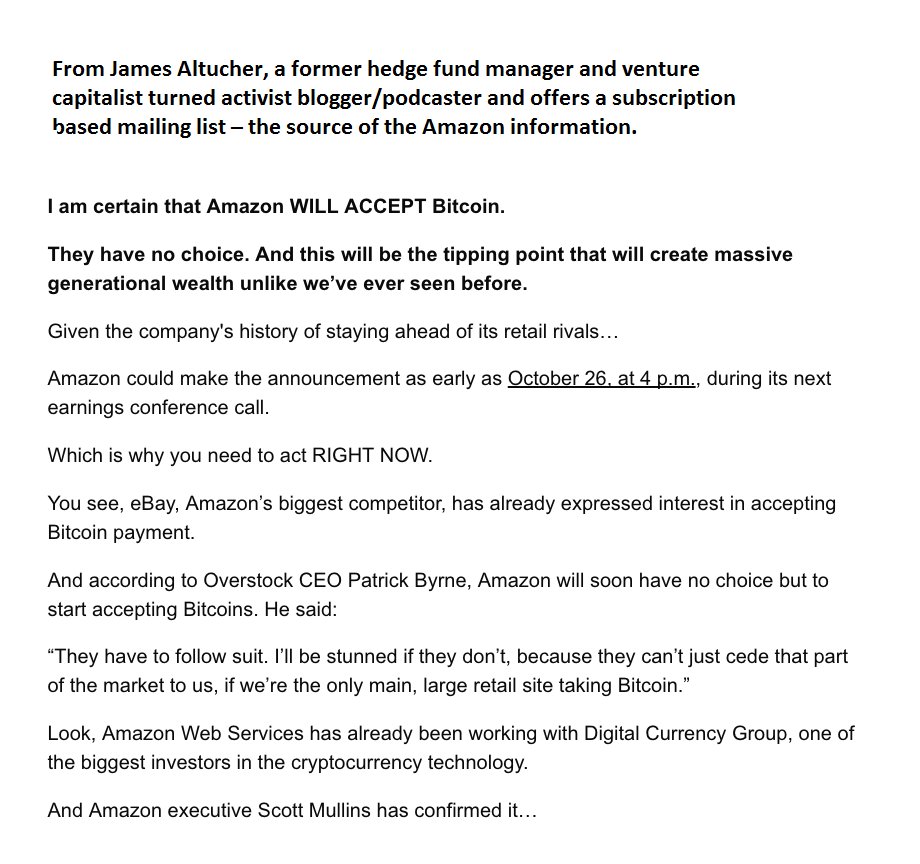 The first place I saw a posting from someone who was semi-reputable, was on twitter...

Joseph Young posted about this article this morning and its rather insightful and makes me feel good about the future of crypto.

Yes its all speculation and yes it is all probably a little douced with FUD, but the plain big picture where he nails a point is where it says,
"They have to follow suit, Ill be stunned if they dont, because they cant just cede that part of the market to us"
I thought about this for a second before coming to the conclusion that its right. How long until major corps start to either adopt a crypto somehow, or start their own crypto somehow... As its all in a financial benefit for them really

I've heard the argument that governments and regulatory bodies would never allow this to transpire, and yes... that is a very valid, cut and dry point. Very correct, this would create massive momentum in the likes of which would be extremely hard to stop or at least then begin to regulate, and IMO, I think that is what we are already seeing in crypto ie: China FUD, Jamie Dimons reckless talks etc. resulting in major drops but ending up with major corrections and rebounds!
The simple fact of the matter is this... the thought of this radical idea is not so far off. Its a rather large step away but if ever taken, could result in possible, how do you say it.... HEADING TO THE MOOOOOOOON. Imagine the boost to the crypto world if an entity as large as Amazon got on board, it would be a game changer... life changer!!

This is the main article from Squawker, and it explains the story a little further into detail
Here Justin Danneman inspires us in his words with a few accredited links to back up what he talks about in this article.

If anyone has any other related links to add, feel free. If I can find any more useful info I will share it in the comments

Cheers and thanks for checking in! Better load up on BTC before this occurs!

Congratulations! This post has been upvoted from the communal account, @minnowsupport, by diggerdugg from the Minnow Support Project. It's a witness project run by aggroed, ausbitbank, teamsteem, theprophet0, someguy123, neoxian, followbtcnews/crimsonclad, and netuoso. The goal is to help Steemit grow by supporting Minnows and creating a social network. Please find us in the Peace, Abundance, and Liberty Network (PALnet) Discord Channel. It's a completely public and open space to all members of the Steemit community who voluntarily choose to be there.

Amazon will take crypto as payments at some point. When? Who knows. For now you can buy things on newegg.com with bitcoin or overstock.com with 50+ coins.